Wild Salmon & Steelhead News is published by the Save Our wild Salmon Coalition. Read on to learn about the Columbia-Snake River Basin’s endangered wild salmon and steelhead, the many benefits they deliver to people and ecosystems, and the extinction crisis they face today. Find out how SOS is helping to lead efforts to restore health, connectivity, and resilience to the rivers and streams salmon depend upon in the Columbia-Snake Basin and how you can get involved and help protect and restore healthy, abundant, and fishable populations.

TABLE OF CONTENTS:
1. RECAP: OUR FALL ‘WILD SALMON WEBINAR SERIES’ - ORCAS, FISHERS, AND FAITH!
2. TWO NEW ORCA CALVES THIS FALL! THE WHALES ARE DOING THEIR JOB, LET'S DO OURS!
3. FOUR NORTHWEST STATES COMMIT TO WORKING WITH NATIVE AMERICAN TRIBES AND OTHERS TO RESTORE ABUNDANT COLUMBIA-SNAKE BASIN SALMON AND STEELHEAD RUNS
4. FROM ‘THE SNAKE RIVER VISION PROJECT’ - RAPIDS ON A RESTORED RIVER
5. VOTE - VOTE - VOTE! PLEASE REMEMBER TO VOTE!
6. THE LATEST DEVELOPMENTS FROM THE (RESTORED) ELWHA RIVER IN WASHINGTON STATE
7. OTHER NEWS YOU MAY HAVE MISSED! 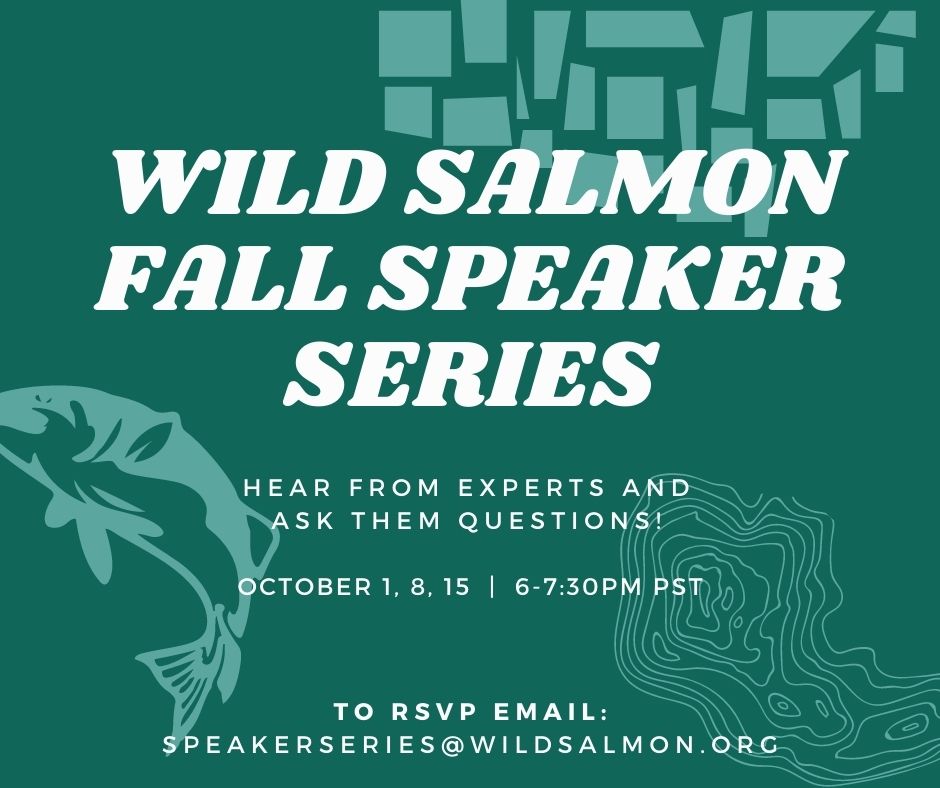 Our speakers did an excellent job sharing their perspectives and leading engaging discussions with our online attendees. They provided a chance for all to learn more about the challenges, opportunities, and implications of restoring the lower Snake River and its endangered fish by removing its four federal dams. We explored ways to address today's Snake and Columbia river salmon - and Southern Resident orca  - crisis in a manner that also ensures clean, reliable, and affordable energy and prosperous communities and cultures.

See our webpage for further information and follow the links below for the recordings of each event:

Have any questions about the series or topic suggestions for future webinars? Contact carrie@wildsalmon.org

2. TWO NEW ORCA CALVES THIS FALL! THE WHALES ARE DOING THEIR JOB, LET'S DO OURS! 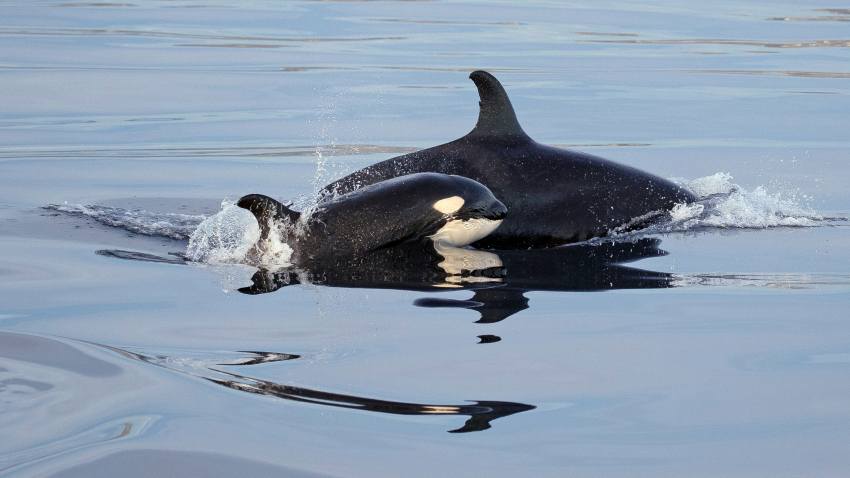 We received some very encouraging news last month as two calves were born into the critically endangered Southern Resident orca community! According to scientists, there may be more births soon to follow. Fingers are crossed! The first year of life for orcas is precarious - roughly 50 percent of all calves do not survive. Fortunately, initial reports are positive - scientists report that these calves look healthy and appear energetic and perky.

The fates of Southern Resident orcas and Snake River salmon are linked. Orcas rely primarily on chinook salmon, but these fish have become scarce and the whales are literally starving to death. They urgently need more salmon to support these new calves and to rebuild their population.

For years, biologists have told us that restoring the lower Snake River by removing its four dams is critical for protecting from extinction the salmon and steelhead that use this basin. Northwest salmon scientists anticipate that a restored lower Snake could return up to 1 million adult chinook to Northwest coastal waters each year to feed hungry orcas and help struggling fishing communities as well. Whale researchers agree: protecting the Southern Residents from extinction depends in part on restoring the lower Snake and its salmon. This is our greatest river and salmon restoration opportunity anywhere on the West Coast.

Snake River salmon and Southern Resident orcas are both struggling for survival today. The comprehensive solutions that salmon, orcas, and communities urgently need and deserve will require active support and engaged leadership from Washington State's senators.

IF YOU ARE A WASHINGTON STATE RESIDENT: Please contact Senators Murray and Cantwell today: urge them to urgently help develop a comprehensive regional solution for our salmon, orca, and communities.

IF YOU LIVE OUTSIDE OF WASHINGTON STATE, YOU CAN STILL HELP: Please follow this link to learn how you can help send a message to policymakers in the Northwest to ask for their urgent, bold leadership.

Learn more about the Southern Residents and their new calves with these recent press stories:

3. FOUR NORTHWEST STATES COMMIT TO WORKING WITH TRIBES AND OTHERS TO RESTORE ABUNDANT COLUMBIA-SNAKE BASIN SALMON AND STEELHEAD RUNS 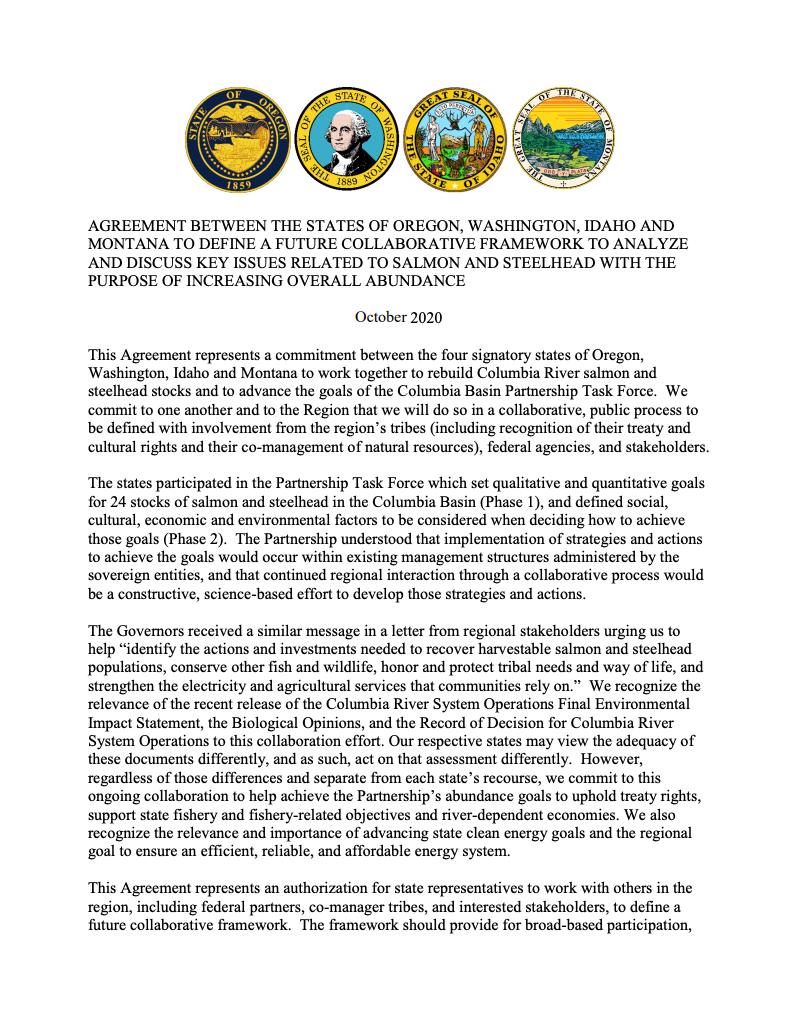 Earlier this month, the governors from Washington, Oregon, Idaho, and Montana jointly issued a public commitment to work with Native American Tribes and stakeholders in the Northwest “to rebuild Columbia River salmon and steelhead stocks and to advance the goals of the Columbia Basin Partnership Task Force.” Salmon, fishing, and orca advocates appreciate this emerging leadership by Governors Jay Inslee (WA), Kate Brown (OR), Brad Little (ID), and Steve Bullock (MT) to restore abundant, self-sustaining, and harvestable salmon and steelhead populations in the Columbia-Snake River Basin - but we also recognize that there is great urgency to act quickly and boldly. Restoring a freely flowing lower Snake River in southeast Washington State by removing its four federal dams represents our very best opportunity to recover salmon anywhere on the West Coast - and action here must be a top priority for the governors in 2021.

Here are the recovery goals recently adopted by NOAA'S Columbia Basin Partnership for salmon and steelhead populations in the Snake River Basin on an annual basis:

While these goals fall far below historic annual fish returns to the Snake River Basin, they are far above current annual returns (all Snake River fish are threatened or endangered today). The CBP's recovery goals are also far above the unacceptably low goals set by the federal government in order to delist these populations from the Endangered Species Act.

Northwest people desire and deserve abundant wild salmon and steelhead populations returning annually in ecologically and economically meaningful numbers. We need to rebuild healthy, harvestable runs that can once again help to support Southern Resident orcas that are struggling to survive, perform their other important ecological roles in both fresh and saltwater habitats, and once again allow people to reliably harvest fish for recreational, nutritional, cultural and economic purposes.

In order for the governors' regional initiative to succeed - to restore salmon and steelhead abundance to rivers and streams of the Columbia and Snake rivers and their tributaries - bold and urgent action is needed.  Without this, imperiled fish populations - and the many benefits they bring to Northwest people and ecosystems - will continue to disappear.

Advocates will do whatever we can to support this initiative and ensure that it helps develop and deliver the comprehensive solutions that salmon, orca, and communities require. Importantly, the governors’ initiative must involve Native American Tribes as full partners, be guided by the best available science (which strongly supports the need to restore the lower Snake River), and it must engage and involve key Northwest members of Congress. Along with the governors’ emerging leadership, the active and constructive engagement of Congress to help develop and deliver coprehensive solutions remains essential.

Tri-City Herald: Four governors agree to work together as some NW salmon may have just 20 to 30 years left (Oct. 9)

Before the reservoir waters rose and were stilled behind the four lower Snake River dams, more than 70 named rapids existed between Lewiston, ID and Pasco, WA. Early white explorers described them with reverence, including Lewis and Clark, who camped above Texas Rapids near Riparia, WA to rest overnight before descending its frothy cascades.

The many rapids provided a challenging journey for steamships that traveled up and down the lower Snake, bringing goods up to Lewiston and towns in between, while picking up apples, wheat, and other goods destined for downstream markets in Portland, OR. It would take a ship more than 3 days to head upriver from The Dalles, OR on the Columbia River to Lewiston, ID, and a mere 18 hours on the return trip. 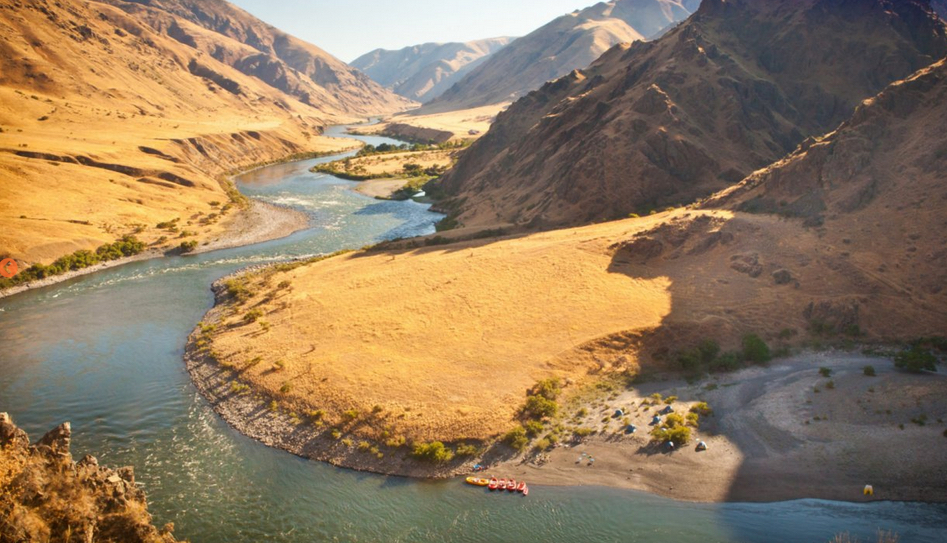 Writer Henry Miller traveled up the lower Snake on a steamship and offered this description of the Palouse Rapids near the confluence of the Snake and Palouse Rivers (and site of Palus, originally a tribal village): “The water is lashed into billows capped with foam, and the feat of ascending them looks fool-hardy. But we take a running jump right into the center of the rapids; and inch by inch the boat goes bravely up…in an hour and a quarter we made three-quarters of a mile."

Today’s modern jet boats and rafts would maneuver these rapids far more easily. Thousands of people come to the region every year to enjoy the free-flowing section of Snake River federally designated Wild & Scenic through Hells Canyon, upstream from Lewiston. Some families do day-trips on jet boats, while others spend 3-6 days floating the rugged canyon country and river.

Dam removal would restore 144 miles of free-flowing Snake River for one-day and multi-day river trips, by raft, kayak, or jet boat. Historic beaches would reappear for primitive camping, and established campgrounds could be expanded and tourist lodges built. People could once again enjoy the river, fish, hunt, bird-watch, pick peaches and apples and learn about both the indigenous and white settler history of Snake River country. And renewed recreation and tourism would bring new dollars into struggling local economies in the area.

What would you like to see along a restored lower Snake River? Do you or your family have photos of the historic rapids along the lower Snake? Reach out to sam@wildsalmon.org

Tuesday, November 3, 2020 is Election Day and your last day to vote. Are you ready?

If you are at least 18 years old, then you have the power to vote on critical candidates and issues this election cycle that will affect the future of our nation; the air, lands, and waters where you live, and the opportunities and quality of life for you, your loved ones and your community.

Make a difference - vote by or before Nov. 3! Save Our wild Salmon has developed a Voting Checklist to ensure you are registered, informed, and ready to vote:

6. THE LATEST DEVELOPMENTS FROM THE (RESTORED) ELWHA RIVER IN WASHINGTON STATE

Here are two great new stories - one from PBS’ new ‘Age of Nature’ series and another from the Seattle Times - a front-page story that appeared earlier this month. "Age of Nature' explores how "we're at a turning point in history and moving in a new direction." Episode 2 - "Understanding" - starts off in western Washington State - with a 15-minute exploration with Southern Resident orcas and the importance of Northwest salmon. Both pieces - from PBS and the Seattle Times - spotlight the evolving dam removal success story on the Elwha River and what it means for people, orcas and ecosystems. 1. Public Broadcasting Service (PBS): Age of Nature Series - Episode 2 - Understanding (October 2020)

2. Seattle Times: The Elwha dams are gone and chinook are surging back, but why are so few reaching the upper river? (Lynda Mapes, Oct. 18, 2020) 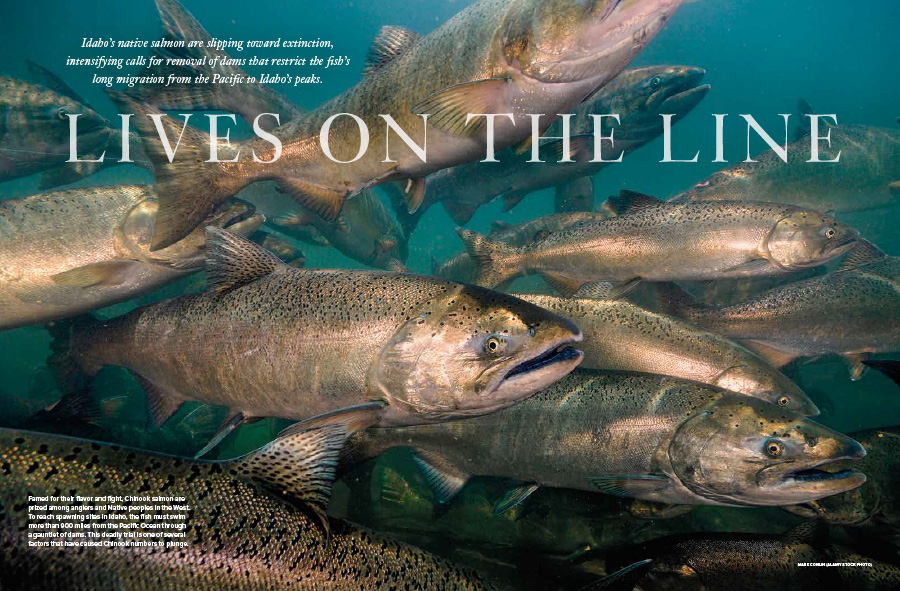 (1) National Geographic: If you unbuild it, they will come—the fish, that is (August 14)

(2) The National Wildlife Federation: Lives on the Line: Idaho’s native salmon are slipping toward extinction, intensifying calls for removal of dams that restrict the fish’s long migration from the Pacific to Idaho’s peaks. (Rocky Barker, Sept. 23, 2020)