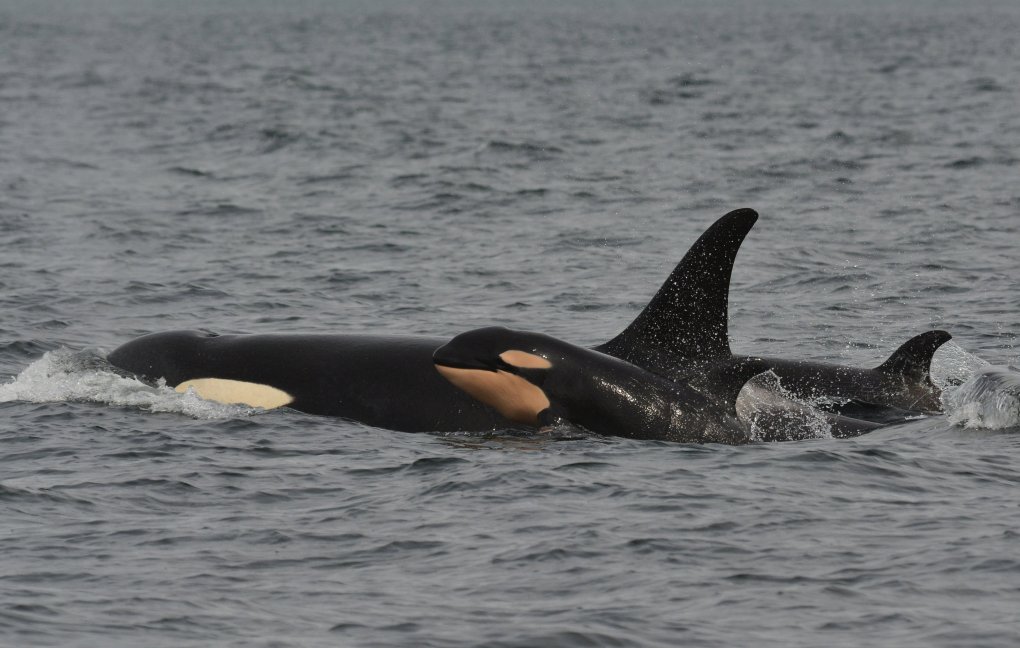 Following news of an orca calf spotted in the region this September, the Center for Whale Research announced September 25 that a second killer whale calf has been confirmed.

The Center for Whale Research is waiting to give the new calf a designation until it is certain it is healthy, noting that about 40% of baby orcas do not survive.

On the day the orca baby was born, the whales partied into the night.

“That day, on September 5, was really remarkable,” said Howard Garrett, co-founder of the Orca Network.

Whales from three pods converged in the Strait of Juan de Fuca, north of the Olympic Peninsula. The J-Pod orcas swam down from the Georgia Strait, where they’d been for five days.

“K and L pods, which hadn’t been seen or heard from since July, came in from the West,” Garrett said. The whales “seemed to have had a pre-arranged meeting time and place,” he said.

It’s been seen before: a whale party known as a “super pod” or a “greeting ceremony.”

The whales whistled and clicked, vocalizing above and below the water. Amid the ruckus, the baby orca, known as J57, was born. The orca was “born looking very healthy and robust,” Garrett said.

Garrett said Tahlequah’s tour of grief, as it was called, “woke up so many people to the fact that these whales are having reproductive problems.” Scientists have pointed to lack of food, specifically Chinook salmon, as the problem. Chinook runs have dwindled in recent decades.

But on this day, September 5, the orcas looked healthier than in years past, which suggested they were finding Chinook salmon to eat from down the coast.

“And then, the next morning, they were gone,” Garrett said. “They had gone out west out to sea. So they were not there foraging. They were there to socialize, on the occasion of the new baby, apparently.”

It’s unclear how the whales could have known to convene in the Strait of Juan de Fuca at the same time.

“They seem to have some kind of communication system that's hard to imagine, because they were 100 miles apart and around several islands, so out of acoustic range,” Garrett said.

“But somehow they were able to meet in that location at that time on the day of the birth of the new baby.”

Orcas from separate pods will procreate during these super pod events, Garrett said; they tend to mate across pods for maximum genetic distance between them.

Orca pregnancies take 18 months – twice the time it takes for a human.

“It's gonna be a little while before we know if any new pregnancies may have come from the super pod,” Garrett said.

But other orca calves may be born in the interim, as two other resident whales are pregnant.

“That is not enough,” Garrett said. “There really should be two or three new births a year to begin to rebuild the population.

There was also some disappointment about the J57's sex.

"For the Southern Resident killer whale community's population sustainability, it is preferred that new calves are female," the Center for Whale Research wrote in a statement. "But regardless of gender, J57 is a very welcome addition. He is robust and appears healthy."

A healthy population would be 150-200 whales, Garrett said. Given that they are fewer than half that goal, “they’ve got a long way to go.”