Seattle Times: The Elwha dams are gone and chinook are surging back, but why are so few reaching the upper river? 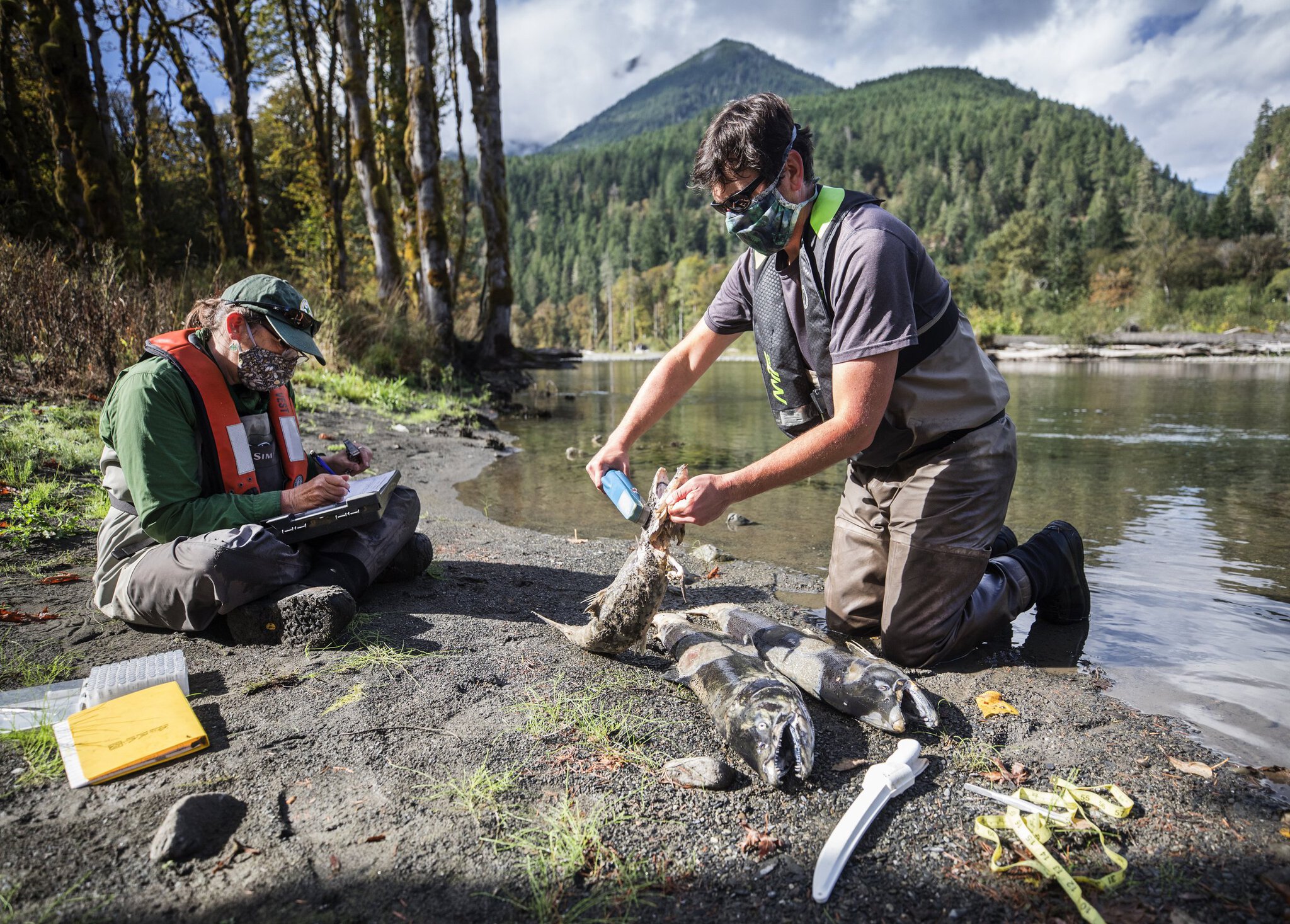 ELWHA RIVER, Olympic Peninsula — They were the king of kings in Puget Sound, the biggest chinook of them all, strong enough to muscle up the falls at the Goblin Gates and power on all the way through nearly 4 miles of chutes and falls in the Grand Canyon of the Elwha.

If Elwha River recovery has an icon, it is these legendary Elwha Tyee, chinook bigger than 100 pounds. Bringing them back was the rallying cry for generations of advocates of Elwha dam removal, from the Lower Elwha Klallam Tribe to the halls of the U.S. Congress, which ultimately approved and funded a $325 million removal project.

Completed in 2014, it’s still the biggest dam takedown anywhere in the world.

Scientists have been tracking nature’s response. Some of what they are finding is surprising, even to them.

Summer steelhead, nearly extinct in the Elwha, have come booming back to the river, all on their own. Once locked up behind the dams, rainbow trout are re-expressing their ability to go to sea as steelhead.

Adult chinook returns to the river since dam removal are the highest since the late 1980s, with more than 7,600 estimated in the 2019 count. While that’s still a modest number, the Elwha represents one of the only watersheds in Puget Sound with such an uptick in population, said Sam Brenkman, chief fisheries biologist for the Olympic National Park, in an email.

Colonization of the lower and middle river has been steady. But fewer chinook are reaching the deliciously cold, uppermost reaches of the watershed. Why? It’s a puzzle scientists are working on.

Summer steelhead and bull trout are a different story. With the least human intervention, the fish have recolonized the river all the way to near its headwaters; increased in abundance, and resumed their seagoing ways now that the river’s connectivity, from headwaters to sea, is restored, Brenkman said.

“The Elwha River is recovering, and provides an excellent example of ecosystem restoration,” he said. It’s still early days, Brenkman noted, of a recovery project that was expected to take 20 to 30 years.

There have been setbacks: Not long after the first intrepid chinook shot past the second dam site, just 10 days after the dam came down, a rockfall tumbled into the river channel, blocking fish passage again. It took repeated blasting in 2015 and 2016 to crumble it to a height of about 6 feet.

It was not until spring of this year that the first class of juvenile chinook went to sea born of parents that spawned after full passage was restored to the river in 2016.

Clues in an ear bone

On a recent fall morning, Washington Department of Fish and Wildlife (WDFW) biologist Joe Anderson knelt in the sand on the banks of the Elwha in the middle river, and pried open the head of a spawned-out chinook.

Digging around, he extracted a bloody prize the size of a pencil eraser: an otolith, or ear bone.

Packed with information, this tiny bone holds some of the clues scientists are gathering as they track how the river and its most famous fish are responding to dam removal.

An ear bone is like the birth certificate for a fish. It can tell scientists how old a fish is, and if it is from a hatchery, which one. In repeat spawners, such as steelhead, it can even reveal how many times the fish has gone out to sea.

Anderson bent over the fish and tugged off a scale for genetic analysis, and opened its body cavity to see if the fish had released her eggs. Her big golden eye was still clear, and her jaws agape, bristling with teeth. “She has done her job,” Anderson confirmed.

Fins stuck out of the water where more chinook were still holding in the current, guarding their nests. The long-distance travelers, back to their home river after at least three years at sea, were beat up, covered with white fungus spots, and shrunk down after living off their body fat for weeks. (Salmon don’t eat once they hit fresh water.)

These were the warriors of their tribe, escaped from all the perils they had faced, from seabirds to seals and sea lions, to fishermen and the shredding teeth of orcas. Endangered southern resident orcas already have been seen prowling the Strait of Juan de Fuca near the mouth of the Elwha, just as the big kings are coming back. It didn’t take them long to get wise to the return of their favorite food.

The teal green river danced and purled, pure, cold and fast. Autumn-gold cottonwood leaves kited through sunbeams. It smelled, everywhere, of fish, nice and stinky. Just like it should on a salmon river in the spawning season. Just like this river always used to.

These spawner surveys are just part of the scientific study underway to track recovery in the Elwha.

Sonar is being used to estimate the numbers of adult returns to the river. Squads of scientists have packed in 1,000 pounds of gear by mule train for riverscape surveys, counting fish in every riffle, glide and pool.

Elwha dam removal is a grand experiment. Salmon were fenced out of most of their spawning habitat for more than a century. Two dams with no fish passage blocked not only salmon migration, but also stopped the natural flow of sediment and wood that builds the side channels, spawning beds, riffles, pools and log jams that salmon need.

Elwha Dam, the lower of the two, was 108 feet high, and built just 5 miles from the river mouth in 1910, to power industrial development of the Olympic Peninsula. Glines Canyon Dam, 210 feet tall, was built 8 miles upriver in 1927. With the dams out, a true mountains-to-sea recovery is happening in a 318 square mile watershed, 83% of which is permanently protected within the Olympic National Park. It is a unique opportunity to start over, and Washington residents have a front seat and endless opportunities to explore one of the most closely watched ecosystem recovery project anywhere.

There are five stages to the recovery program: preservation, recolonization, local adaptation, and establishment of viable, naturally spawning populations. So far, Elwha recovery is still in early days: preservation of fragile fish runs through the process of dam removal, which released enough sediment to the river to fill nearly 2 million dump trucks.

By now the sediment has mostly reached the sea, where it is nurturing a renewal of the near shore ecology and has formed Washington’s newest beach. In the river, the beginnings of the second phase, recolonization, have begun.

To understand how recovery is going, scientists look at four key aspects: abundance, productivity, distribution and diversity. The vision guiding recovery is a population robust enough to eventually support fishing that is naturally producing, rather than reliant on a hatchery.

Rewilding the hatchery-dominated population of the Elwha chinook run, to once again become 100% naturally producing, is a significant challenge.

Do hatchery fish have mettle to reach upper watershed?

Nearly all of the chinook coming back to the river today are hatchery fish. They are descended from Elwha chinook used in a state hatchery program since the 1930s. The Elwha stock of chinook is unusual in Washington, in that it is not mixed with the genes of chinook from other rivers, as happened in so many other hatchery programs around Puget Sound.

“There is sort of a big cloud in Puget Sound, with a big homogenized gene pool,” Anderson, of WDFW, said. “But Elwha and the neighboring Dungeness are unique.”

However, the hatchery origin of these fish could be one reason so few chinook are making it to the upper reaches of the river, upstream of the Elwha’s Grand Canyon, scientists posit.

Do these hatchery chinook have the chops to ascend to the heights of the watershed?

The historic upriver stock was likely spring run, locally extinct on the Elwha, said Mike McHenry, habitat biologist for the Lower Elwha Klallam Tribe, in an email. The hatchery fish that dominate the chinook run today are from summer chinook, which may not have all the attributes of the spring run fish.

They may be spawning lower in the river for several reasons. One, that is where the hatchery is located, so some fish are homing there. The new hatchery was part of the dam removal project and was controversial.

But density is also likely part of the picture. “The number of fish to date had plenty of habitat to select and tend to use what they find,” McHenry said. “I’ve seen that when densities are very high the competition for spawning sites forces fish upstream.”

The tribe has proposed, on a 5-year basis, relocating some chinook to the uppermost reaches of the river to jump-start colonization there. But could that defeat the evolutionary processes needed for a strain of super salmon to re-emerge, thrashing through the falls and canyons to get to their high mountain redoubt, all on their own? Or, is that perhaps a small risk, given that any fish planted in the upper reaches of the river that can’t cut it simply won’t persist anyway?

Those questions, raised in a report by the tribe to Olympic National Park officials, remain unresolved.

One thing is for sure, though: Summer steelhead are already showing this river can startle.

The return of a summer steelhead thought to be lost to the river was a shocker. Steelhead in the river today were thought to be only winter steelhead, descended from Elwha River stock bred in the tribe’s hatchery. But after the upper dam came down, scientists in 2016 started seeing something new: summer steelhead that genetic analysis showed are aligned with natural origin rainbow trout from the upper reaches of the watershed.

John McMillan, steelhead science director for Trout Unlimited, said he has never, in two decades of snorkel surveys in the Quillayute and Hoh Rivers, ever seen steelhead like he’s already seen in the Elwha. The survey counted more than 340 summer steelhead in 2019 — after none at all were counted in surveys before dam removal.

Bull trout also more than doubled in counts taken before and after dam removal. Rainbow trout truly went off once the dams came down. In the 2008 survey, 3,218 were counted. The total in 2019 was 24,896.

Summer steelhead in the river today are believed to be the product of some of those rainbow trout, re-expressing their long bottled-up ability to go to sea as steelhead.

“This is as close to Lazarus as you can get,” McMillan said. “It is a shock these fish came back. It’s really fun to be surprised.”

All fishing for salmon and steelhead is still shut down, as it has been since 2011, to let the river recover. One day it is hoped fish will storm the river by the hundreds of thousands, as they did before construction of the dams.

“This is one of the few times a parent can take a child and say, 50 years from now you are going to have a much better chance of catching a fish here than I ever had,” McMillan said. “It’s a sliver of hope and that is why we do this. Humanity needs hope.”

Lynda V. Mapes: 206-464-2515 or lmapes@seattletimes.com; on Twitter: @LyndaVMapes. Lynda specializes in coverage of the environment, natural