Welcome to the Snake and Columbia River Hot Water Report, Week 5. This weekly report during Summer 2019 will present conditions - including water temperatures and status of salmon and steelhead returns - on the lower Snake and Columbia rivers via graphs, analyses, and stories. The harmful effects on struggling fish populations caused by federal dams and their reservoirs is now being exacerbated due to a warming, changing climate.

Each week’s report gives a real-time update on water temperatures in the lower Snake and Columbia river reservoirs, the highest weekly temperature in each reservoir, and the status of adult returns for different species as they make their way back toward their natal spawning grounds. We’ll hear from scientists, tribal fishers, fishing guides, and salmon and river advocates about the challenges facing the Columbia and Snake rivers - and the opportunities to improve their health and begin to rebuild healthy, resilient fish populations and the many benefits they deliver to Northwest culture, economy and ecology.

MEAN DAILY WATER TEMPERATURES ON THE SNAKE AND COLUMBIA RIVERS

The daily mean temperature at the forebay - the upstream side of each dam - is represented with solid lines, while the 10-year average (2009-2019) for each reservoir is represented by the dashed line of the same color. For this initial report, 10-year historic data was only available for 4 of the 8 dams we will be monitoring. Finally, the dotted line across the top of the graph represents the upper end of the 68° “comfort zone” for juvenile and adult salmon. 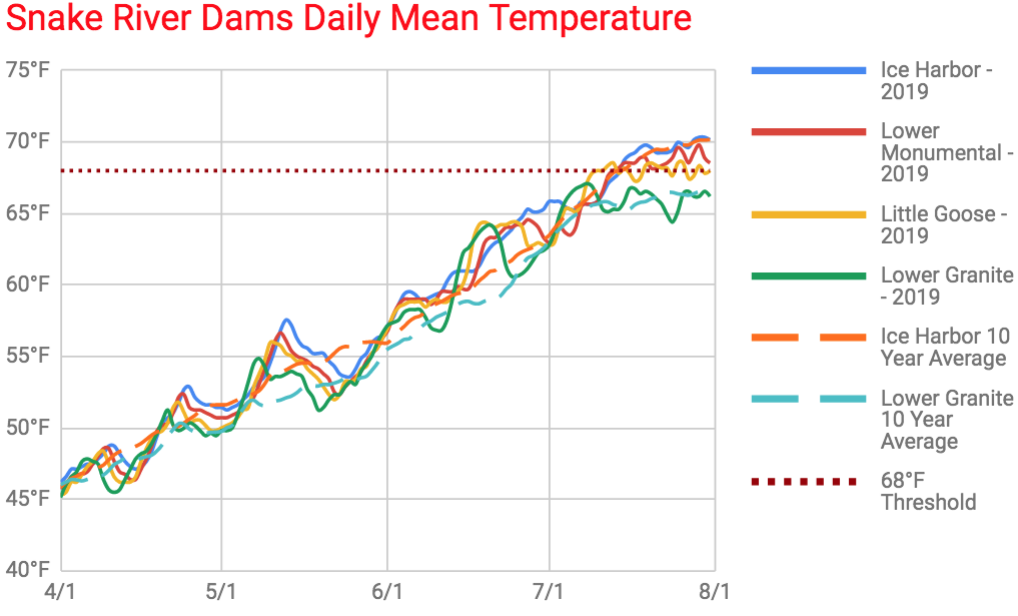 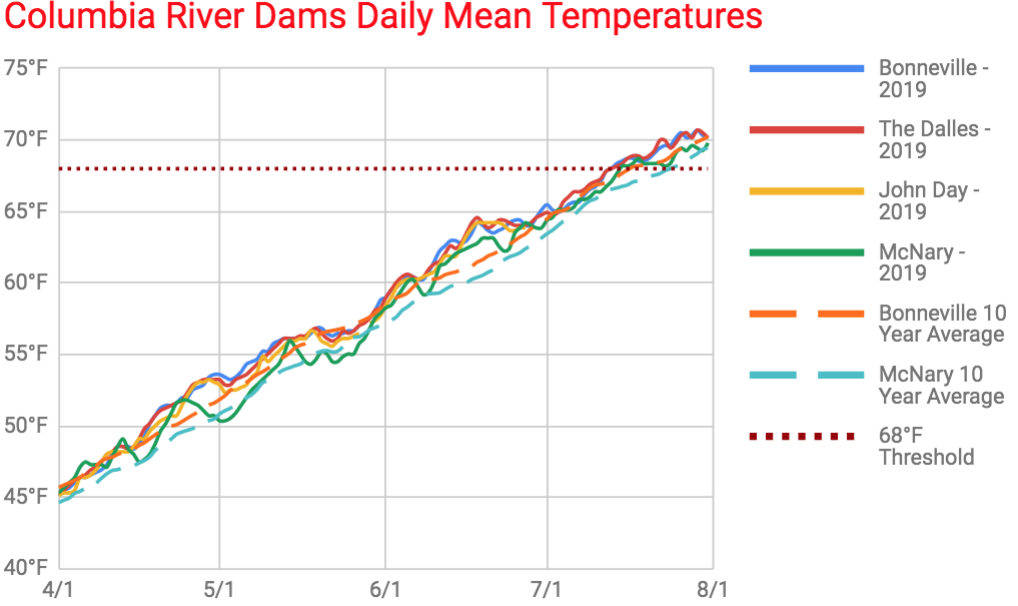 Water temperatures in the Columbia River continue to climb, with little relief in sight. Every day for the past week, the four lower Columbia River dam reservoirs exceeded 68°F threshold, with average temperatures at Bonneville, The Dalles and John Day exceeding 70°F all week. 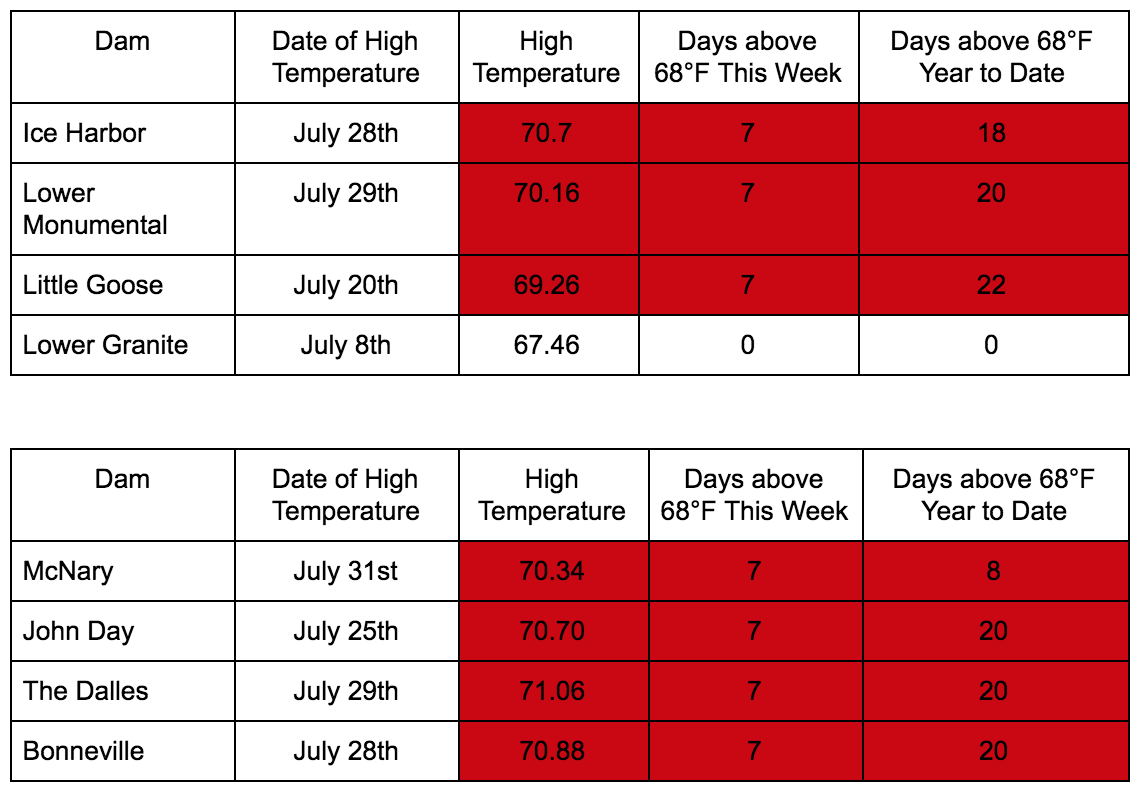 Every day this week, all the reservoirs apart from the Lower Granite dam reservoir had average temperatures above 68°F. Remember, the longer and higher that temperatures remain above this threshold, the more the negative impacts on salmon accumulate. The dams not only create warmer waters in the slack-water reservoirs but are road-blocks for adult salmon, lengthening the amount of time they spend traveling upstream. By the time they reach the “cooler” waters of the Lower Granite reservoir, these fish have already spent significant amounts of time in the hot waters of the previous seven. 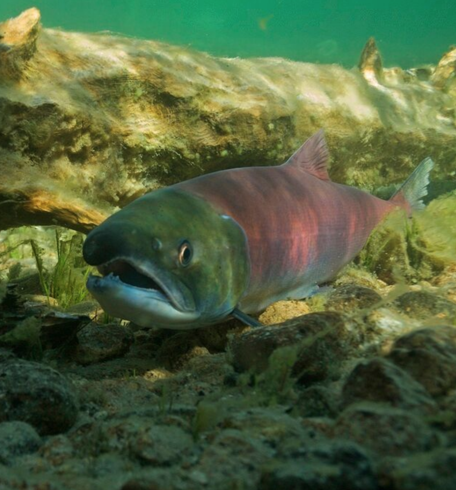 This week, we are returning to check in on sockeye salmon returns to the Columbia/Snake Basin. In Issue 3, we looked at the year-to-date returns for sockeye returning to the Columbia Basin. Sockeye salmon, fish that typically return to the basin between June 1st to August 1st, are now reaching the tail end of their migration period. This week, we will look at the 2019 end-of-season returns and compare that to fisheries agencies’ 2019 pre-season predictions as well as to the 10-year average return.

If the earlier report on spring/summer chinook returns was dismal, be forewarned, the following is downright depressing.

When looking at percent returns from forecasts made by fisheries managers at the start of the season (red bar) and comparing it to the actual returns (yellow bar), only 66% of pre-season predictions of Columbia Basin sockeye actually returned to Bonneville dam, and only 37% of pre-season predictions for Snake River sockeye returned to Lower Granite dam. It is important to keep in mind that this year’s forecasts for sockeye were grim to begin with, and we did not even reach that extraordinarily low benchmark.

Claire McGrath of NOAA Fisheries told the Columbia Basin Bulletin “Relative to the 10-year average, this year is a very low return of sockeye, particularly Snake River sockeye,” she said. And she is right. Sockeye returns to the Bonneville dam are just 20% of their 10-year-average rates, and returns to Lower Granite dam were less than 5% of the 10-year average.

Snake River Sockeye have been listed under the Endangered Species Act since 1991. The population goal for delisting is 2,500 natural-origin (not hatchery-origin) fish returning to their spawning beds in the Stanley Basin (ID) for 8 consecutive years. Clearly, if we are going to save this iconic species, we need to make big changes quickly.

In last week’s edition of the Hot Water Report, we explored how a restored river and salmon and steelhead runs in the Columbia Basin would boost recreational and commercial fishing economies from coastal Washington, to southeast Alaska, to inland Idaho. This week, we further investigate the economic opportunities the region is missing by exploring the river recreation and tourism that a free-flowing river would create.

Inland river-based activities have helped create thriving tourism economies in many towns in Washington State like Leavenworth and Winthrop, where the rapids of the Wenatchee and Methow attract rafters, kayakers, inner-tubers and more. But when comparing tourism-related economic gains over the last ten years to these and other nearby cities, Clarkston is the only one that has experienced a decrease in associated revenue. 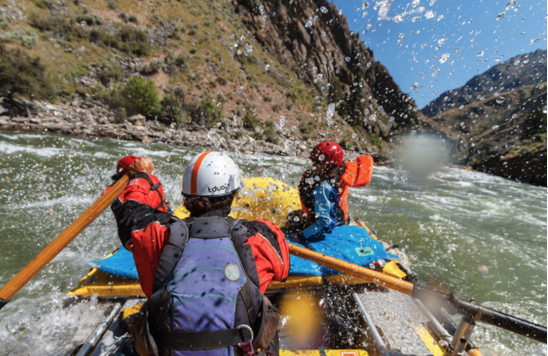 A free-flowing Snake River would deliver a new, consistent and predictable source of revenue and jobs in an area that today lacks a river-based outdoor recreation industry. “An undammed lower Snake River would provide one to seven-day river trips a short drive from Walla Walla, Wenatchee, and the Tri-Cities,” according to Jacob Schmidt, a guide based in Central Washington. “Flows on the Snake would provide whitewater opportunities for the entire season, bringing a tourism boom to the communities in southeast Washington.”

Lana Weber of the Idaho Conservation League spoke of how towns in Idaho like Salmon, Riggins and Orofino that “rely on recreation and tourism have already begun to experience economic hardship. . . eventually this may cause tackle shops and outfitters to close, and tourism and commerce in these areas to nose dive.”

But restoration of the lower Snake River and its whitewater recreation could help support and revitalize towns like these. A new economic analysis by ECONorthwest found that dam removal could result in an increase of almost 100,000 recreational river trips to the Lower Snake River by 2026, and up to 1,000,000 by 2039. This would result in an associated increase in recreational value of up to $545 million by 2045 for the region. Nearby communities would also reap the benefits, as visitors spend money with local guides, outfitters, restaurants, and other businesses. 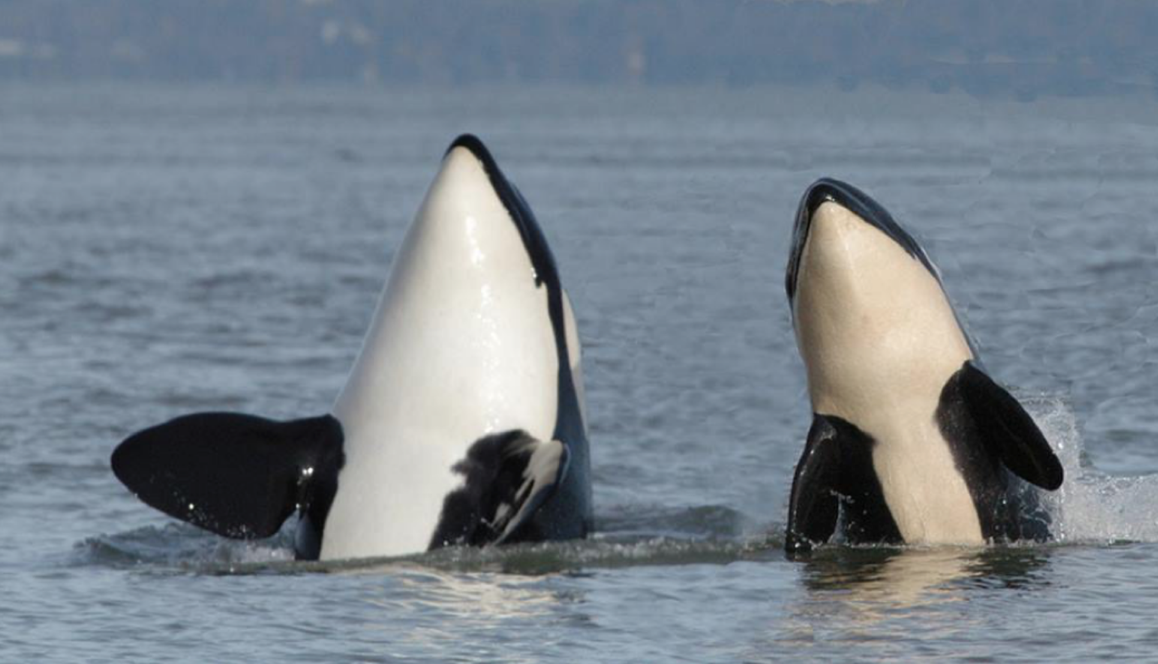 Coastal communities also depend on the resources - salmon - that literally pour out of the Snake and Columbia river to feed a major tourist attraction – Southern Resident orcas. The whale watching industry brings in tens of millions of dollars in tourism revenue to many small, coastal communities. The presence of this industry delivers important benefits to these towns, as tourists who come for these ventures also visit local shops, museums, hotels,  and restaurants.

An additional benefit of whale watching tours - whether land or boat based - is the impact they have on participants. These tours are a powerful way for both locals and tourists to become acquainted with the whales, the threats they face, and the ways that each individual can become an advocate working towards greater protections for these magnificent mammals and other wildlife. Unless chinook salmon populations rebound quickly, we will likely lose the Southern Resident orcas.

The situation on the lower Snake River today is costly, risky and uncertain. Its put two of the Northwest’s most iconic species on the edge of extinction and it is causing economic hardship for fishing and tourism-based economies and communities across the Northwest - from inland Idaho to coastal Oregon and Washington to southeast Alaska. Restoring this river and its native fish populations would create new outdoor recreation opportunities, rebuild sport and commercial fisheries, and help to greatly expand tourism opportunities to benefit small-town economies and local businesses throughout the region.