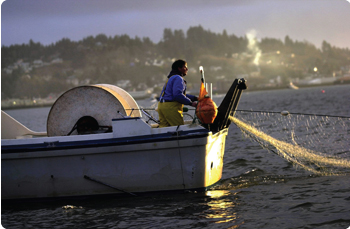 Treaty platform fishing and commercial treaty gillnetting will begin this month for summer chinook and sockeye salmon. Tribes had not had a commercial gillnet fishery during the spring chinook run.

Preseason forecasts for these fish are predicted to be lower than actual returns in 2018 and that is reflected in the lower allocation for summer chinook (6,450) and sockeye (6,608) allowed for all treaty summer fisheries.

Only steelhead are forecasted to return at a slightly higher rate than last year, with a preseason estimate of 126,950 fish. Last year the actual count for the fish, which includes both the earlier Skamania stock and the upriver A- and B-Index run, was 100,483.

The two-state Columbia River Compact met Wednesday, June 12, to put their seal of approval on the treaty fishing. Commercial hook and line platform fishing upstream of Bonneville Dam will begin June 24 and continue through the end of the summer season, July 31. Commercial hook and line platform fishing downstream of the dam follows the same schedule.

Commercial gillnetting also will begin 6 am, Monday, June 24 and continue for 2.5 days to 6 pm, Wednesday, June 26.

The Yakama Nation Zone 6 commercial fishery will begin June 24 and will continue until further notice at Drano Lake, and the Wind and Klickitat rivers.

Some 66,668 spring chinook have passed Bonneville as of June 12, or about one-third the 10-year average.

The summer season begins June 16, according to the Compact Summer Fact Sheet No. 1. The latest U.S. v Oregon Technical Advisory Committee, which sets preseason forecasts and adjusts those forecasts in-season, recently downgraded its preseason forecast of spring chinook from 99,300 to 75,000.

Steelhead over Bonneville Dam as of June 12 was 2,467 (1,159 wild). The 10-year average for that date is 6,728 fish (2,046 wild). Based on the 10-year average timing, the total run would normally be about 30 percent complete and the unclipped run would be about 26 percent complete at Bonneville on June 10. While TAC has not yet reviewed the Skamania run size, the total run and unclipped run are tracking less than forecast based on average timing, the Fact Sheet says.

There is no specific harvest rate limit for steelhead in summer season treaty fisheries, but harvest of steelhead is low in the summer and is expected to remain within recent average rates.

TAC will begin to update run sizes in late June or early July. Actual allowed fishery impacts are based on actual not forecast run sizes. Actual allowed catches will be determined in-season.