Welcome to the Snake and Columbia River Hot Water Report, Week 3. This weekly report during Summer 2019 will present conditions - including water temperatures and status of salmon and steelhead returns - on the lower Snake and Columbia rivers via graphs, analyses, and stories. The harmful effects on struggling fish populations caused by federal dams and their reservoirs is now being exacerbated due to our warming, changing climate.

Each week’s report will give a real-time update on water temperatures in the lower Snake and Columbia River reservoirs, the highest weekly temperature in each reservoir, and the status of adult returns for each species as they make their way back toward their natal spawning grounds. We’ll also hear from scientists, tribal fishers, fishing guides, and salmon and river advocates about challenges facing the Columbia and Snake rivers - and the opportunities to improve their health and begin to rebuild healthy, resilient fish populations and the many benefits they deliver to Northwest culture, economy and ecology.

The daily mean temperature at the forebay - the upstream side of each dam - is represented with solid lines, while the 10-year average (2009-2019) for each reservoir is represented by the dashed line of the same color. For this initial report, 10-year historic data was only available for 4 of the 8 dams we will be monitoring. Finally, the dotted line across the top of the graph represents 68° - the upper end of “comfort zone” for juvenile and adult salmon. 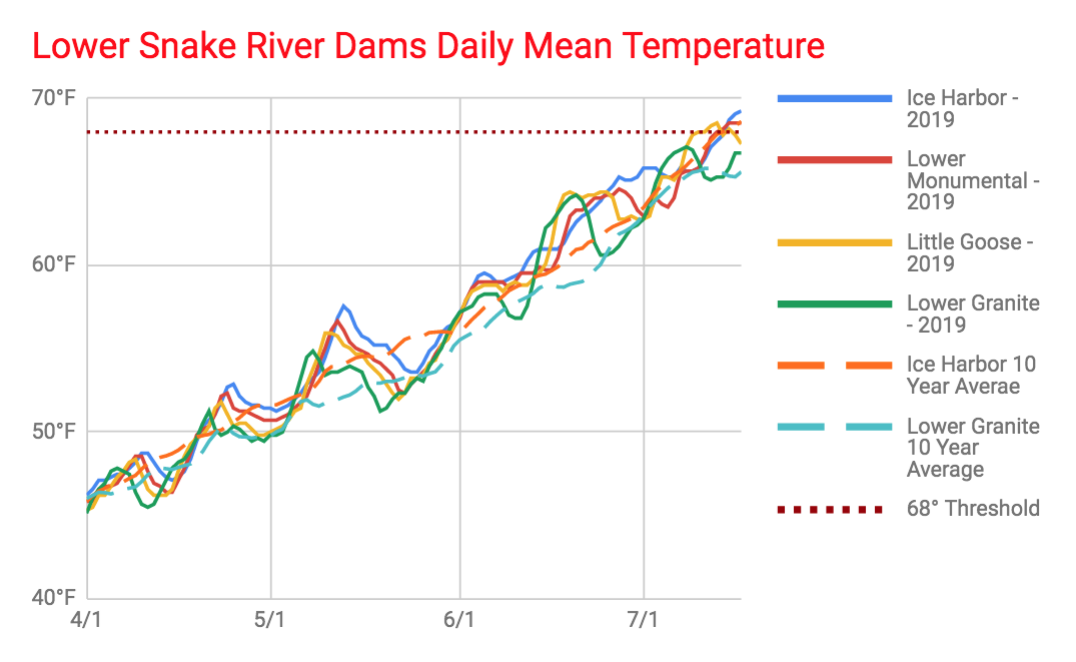 Harmful water temperatures reached in the lower Snake and lower Columbia river reservoirs: The first three dams along the Snake River from the Columbia have peaked over the threshold (68 degrees) this week. Lower Granite dam reservoir dipped this week before climbing once more, which aligns with the Army Corps of Engineers implementation of water release from Dworshak dam to cool down the reservoir (read last week’s Hot Water Report to learn more about this process). 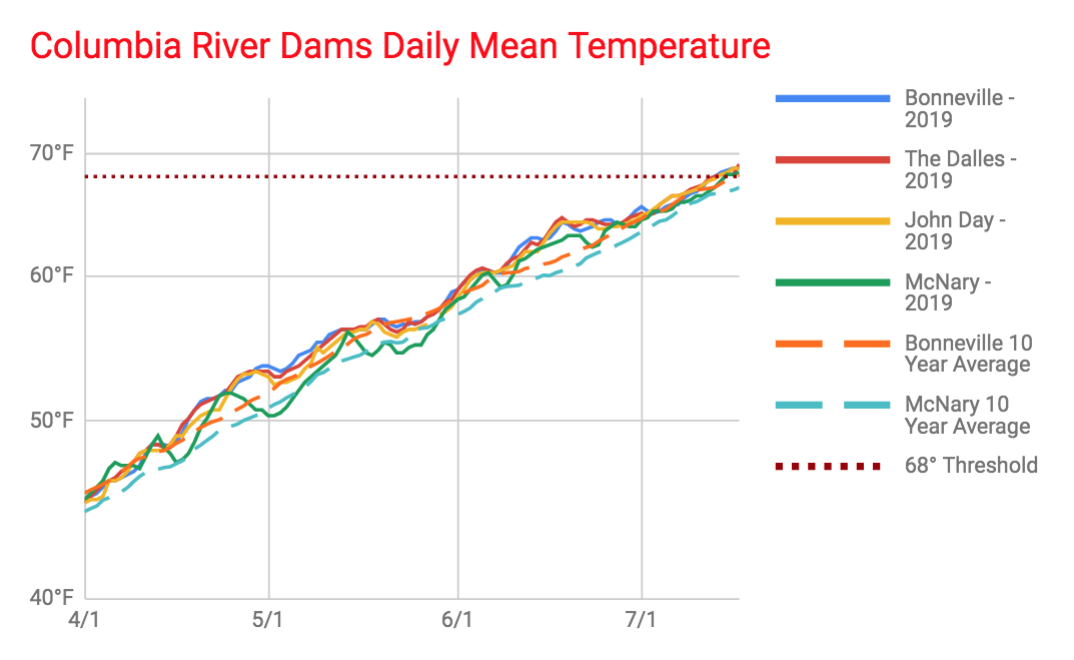 The Columbia River dams have all peaked over the threshold temperature and hovered around 69°F for the entire week. 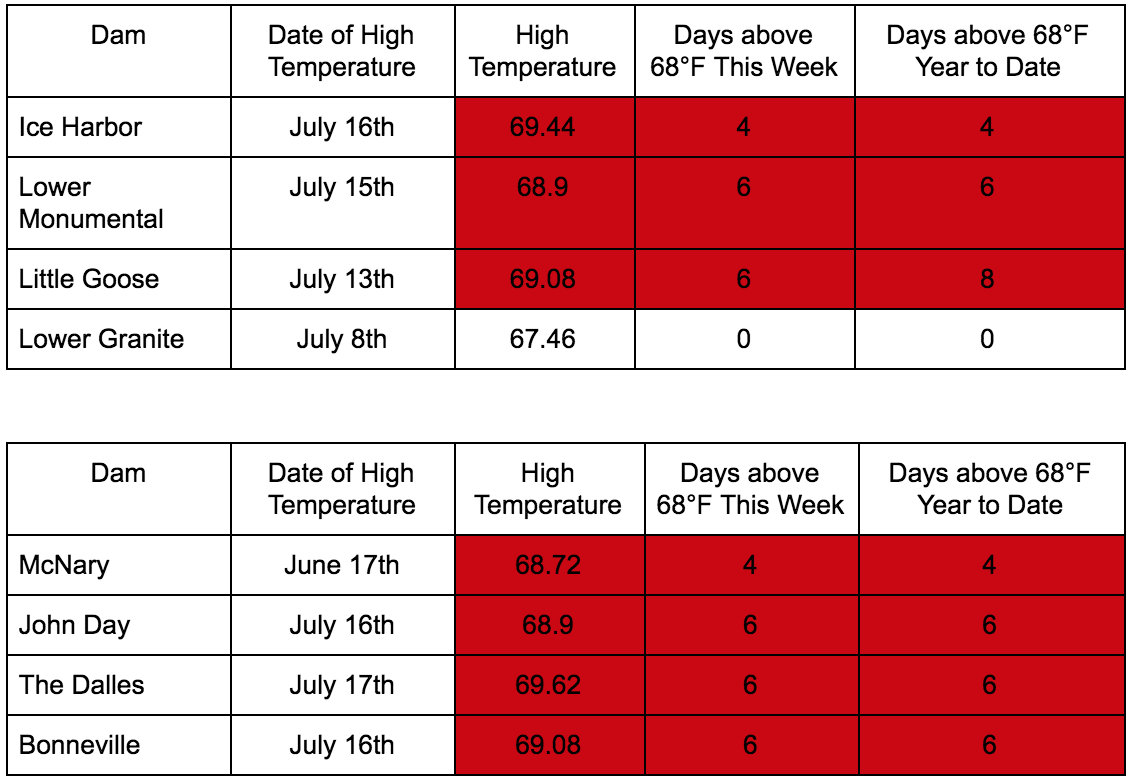 Lower Granite was the only dam reservoir to benefit from the increased water release from the cool Dworshak reservoir and not have temperatures exceed the 68°F threshold. The first three dams on the Columbia moving east reached above-threshold temperatures for 6 of the last 7 days.

FEATURED FISH: Snake River Sockeye – our most endangered salmon in the Columbia Basin 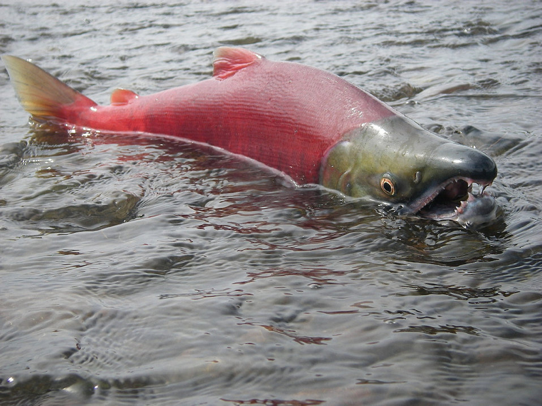 Sockeye salmon, when spawning, are striking in their appearance. Both males and females transform their silver, ocean-tuned bodies into bright red freshwater ones, with males developing a green hooked nose to fend off potential rivals at the spawning grounds. Beautiful? Frightful? Whatever you think, they are a symbol of the Pacific Northwest. From tribal art to city murals, storm drain signage to statues, sockeye are everywhere.

These beautiful endangered fish will be our focus this week as most of the Snake River sockeye run has migrated past the confluence of the Columbia and Snake Rivers in south-central Washington, and are now traversing the lower Snake River. That said, this year’s seasonal sockeye return is dismal – just 19 fish have been counted as of July 17, 2019 passing Lower Granite dam near Lewiston ID – the last dam they must pass headed home.

Sockeye are the third most common of the Pacific salmon species due primarily to still-abundant Alaskan populations whose habitats are largely unobstructed and intact. Snake River sockeye, however, are far from common. They were the first salmon population (in 1991) anywhere in the United States to be listed as endangered. A century ago, scientists estimate ~150,000 sockeye salmon returned to the Snake River and its tributaries - spawning in natural lakes in the Wallowa Basin in northeast Oregon and Stanley Basin in central Idaho. Today tells a far different story. In 2017 and again in 2018, only 11 natural-origin sockeye survived the 900-mile, 6,500 vertical foot swim from the Pacific Ocean to central Idaho’s Redfish Lake.

Redfish Lake in the Sawtooth Mountains was named for the brilliant color of the sockeye salmon that historically returned en masse from the ocean to spawn and die. More than 35,000 fish once returned to this lake. The construction of dams and other human activities in recent decades have decimated this once prolific run.

In 1992, a single fish survived the 900-mile journey back to Redfish Lake. “Lonesome Larry” brought new attention to the plight of Snake River sockeye salmon. A partnership of state, tribal and federal fish managers initiated a conservation hatchery program to save the Redfish Lake Sockeye Salmon population. While the program may have prevented extinction, the species remains at extreme risk. According to NOAA – the federal agency charged with sockeye protection programs - “Snake River Sockeye Salmon cannot be said to be recovered until it is made up of natural-origin fish spawning in the wild and surviving their two-way journey in far greater numbers.” We need to make some big changes quickly in order to protect this population from extinction and to recover it; the population goal for delisting is 2500 natural fish.

Sockeye are persistent.  Unlike steelhead and chinook, which will rest in cool water to recuperate during their journey home, sockeye never take a break when they return to the river. This attribute, coupled with the unique timing of their return upriver in July, August and early September, when dammed sections of the Columbia and Snake Rivers become overheated - makes them especially vulnerable to hot water-caused mortality over the course of the 900-mile migration.