Welcome to the Hot Water Report 2019. This weekly report during Summer 2019 will present the conditions - like water temperatures and status of salmon and steelhead returns - on the lower Snake and Columbia rivers via graphs, analyses, and stories. The harmful effects on struggling fish populations caused by federal dams and their reservoirs is now being exacerbated each year due to warming waters and a changing climate.

Each report will provide an update of water temperatures in the lower Snake and Columbia river reservoirs, the highest weekly temperature at the forebay of each dam, and the status of adult returns for each species as they make their way back in search of their natal spawning grounds. We’ll also hear first-hand from scientists, tribal fishers, fishing guides, and salmon and river advocates about challenges facing the Columbia and Snake rivers - and the opportunities to improve their health and begin to rebuild healthy, resilient fish populations and the many benefits they deliver to the Northwest’s culture, economy and ecology.

In 2015, hot waters caused by low snowpack and high temperatures killed more than 250,000 adult salmon returning to the Columbia Basin. High sustained summer reservoir temperatures are now routine in the basin during summer months. Salmon and steelhead begin to suffer harmful effects when water temperatures exceed 68° Fahrenheit. The longer temperatures remain above 68° and the farther the temperatures rise above 68°, the greater the harm, including increased metabolism, increased susceptibility to disease, reduced fecundity or reproductive potential, and/or death.

Furthermore, one of the key threats facing the region’s critically endangered Southern Resident orca is a lack of prey. These incredible mammals depend mainly on chinook salmon, which comprise roughly 80 percent of their diet. As numbers of chinook salmon dwindle in Northwest coastal waters - and especially Snake River spring chinook - the Southern Residents population has also plummeted. Just 75 individual whales survive today - they are struggling to survive and reproduce; they need more food.

The daily mean temperature at the forebay - the upstream side of each dam - is represented with solid lines, while the 10-year average (2009-2019) for each reservoir is represented by the dashed line of the same color. For this initial report, 10-year historic data was only available for 4 of the 8 dams/reservoirs we monitor. Finally, the dotted line across the top of the graph represents the 68° “comfort zone” for juvenile and adult salmon. 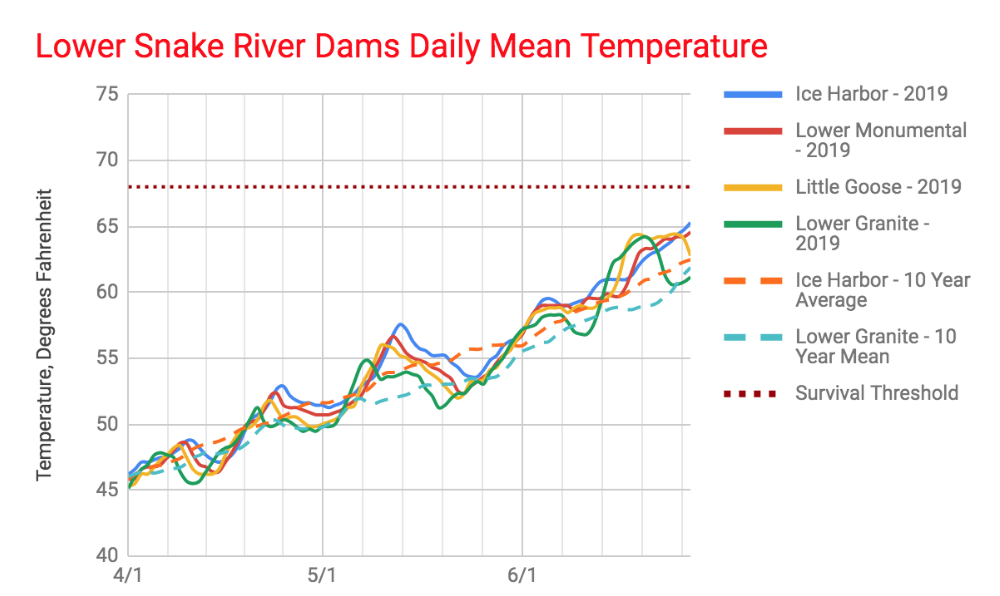 Apart from a dip in mid April, temperatures in the forebays have either hovered at or above the 10-year average, with notable spikes occurring in mid-May and late June. 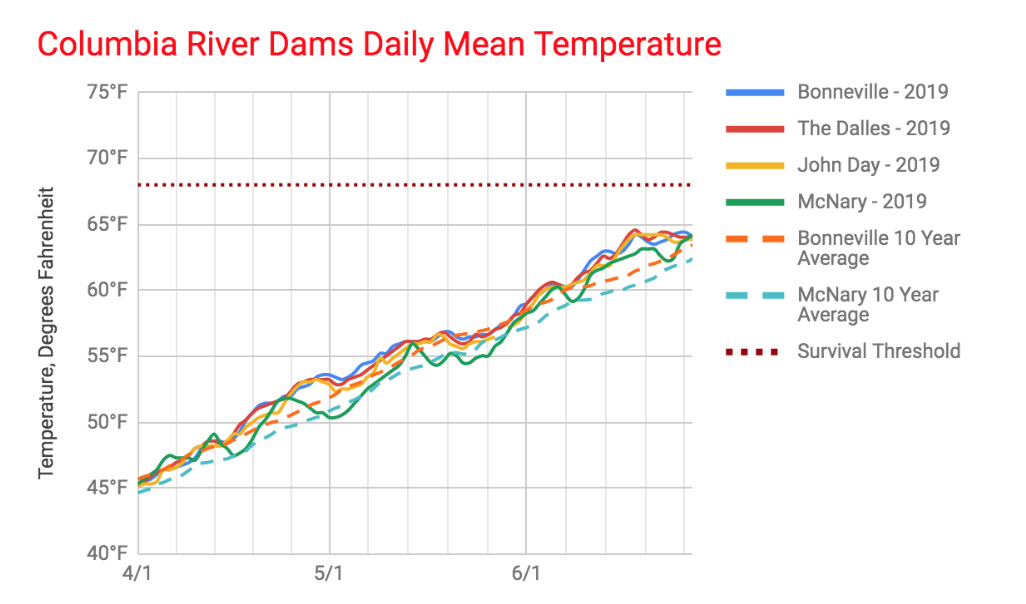 The lower Columbia shows considerably less fluctuation as it has a higher volume, lower grade, and a more temperate climate than the lower Snake.

Ice Harbor Dam registered the highest instantaneous temperature on the Snake River this week at 65.3° with The Dalles Dam just downstream registering the high for the Columbia at 64.58°.

Above average spring temperatures have become the norm on the lower Snake River, as the large reservoirs created for shipping traffic slow the river to a crawl and absorb solar radiation.

A free flowing river is varied and dynamic with pockets of cold water that fish navigate between as they rest, hunt, or travel. Lower Snake river reservoirs, however, spread water temperatures uniformly throughout, effectively eliminating cold water refuges that are an essential part of healthy, resilient salmon habitat. Along the whole 320 miles of slackwater from Bonneville Dam to Heller Bar on the Snake River, where the river flows free once again, there is precious little cold water in summer. As climate change pushes regional temperatures higher and reduces snowpack in Northwest mountains, we can expect migration conditions - and salmon mortality - to worsen. 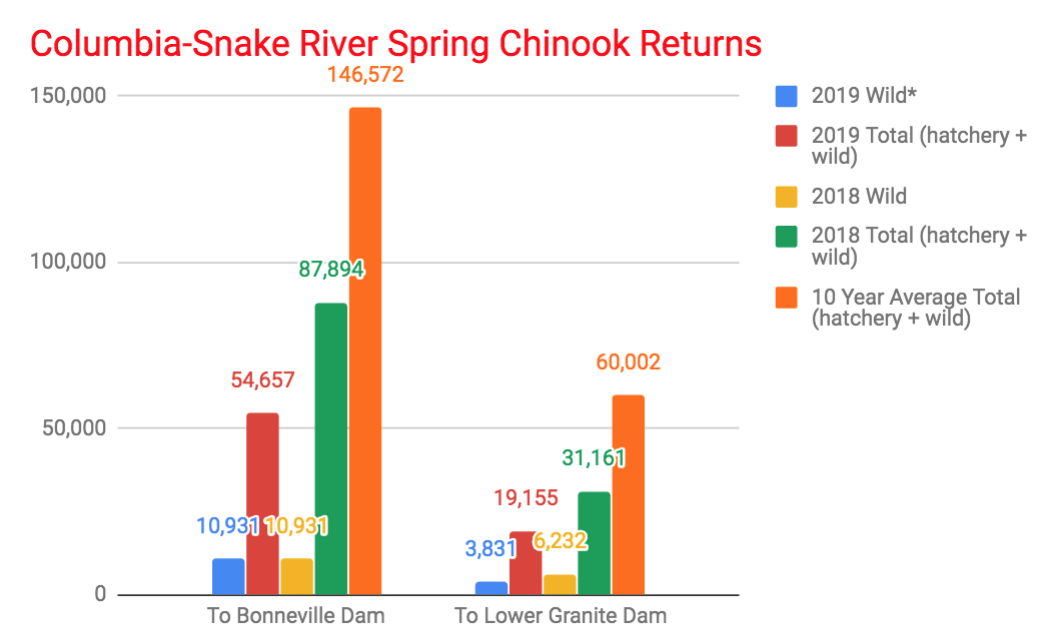 As the first major salmon run of the year, spring chinook hold special significance for many Northwest Native American Tribes and their first salmon ceremonies. Fisheries scientists see them as an initial indicator of the overall status and condition for adult returns in any given year.

Chinook, or King salmon, are the largest and richest of the salmonid species and are thus prized by many commercial and sport fishers. They are also notably the primary food resource (roughly 80 percent of their overall diet) of the critically endangered Southern Resident orcas. Columbia Basin chinook spend up to seven years in the ocean and are caught as far away as the waters of northern Japan before returning to freshwater to spawn.

The Snake River Basin once produced nearly half of the two million adult spring chinook that flooded into the mouth of the Columbia River each year. Much of this Snake River Basin habitat is still in excellent condition. Upstream of the lower Snake River dams are cool waters flowing through millions of acres of wilderness and thousands of miles of pristine rivers and streams. Due to its historic productivity, protected status, high elevation (thus cool temperatures) and excellent condition today, fisheries biologists highlight this basin for its very high recovery potential.

Spring chinook returns this year were below even the record-low numbers forecasted. This has resulted in fishing closures on the lower Columbia in Washington and lower Snake in Idaho and Washington (see links below).

The urgent plight of critically endangered Southern Resident orcas has recently captured the attention of millions of people in the Northwest and the nation. Last summer, the region watched with breaking hearts as J35 (Tahlequah) bore her dead calf for 17 days through the waters of the Salish Sea in a public procession of grief. This unique community of whales is suffering first and foremost from a lack of prey. 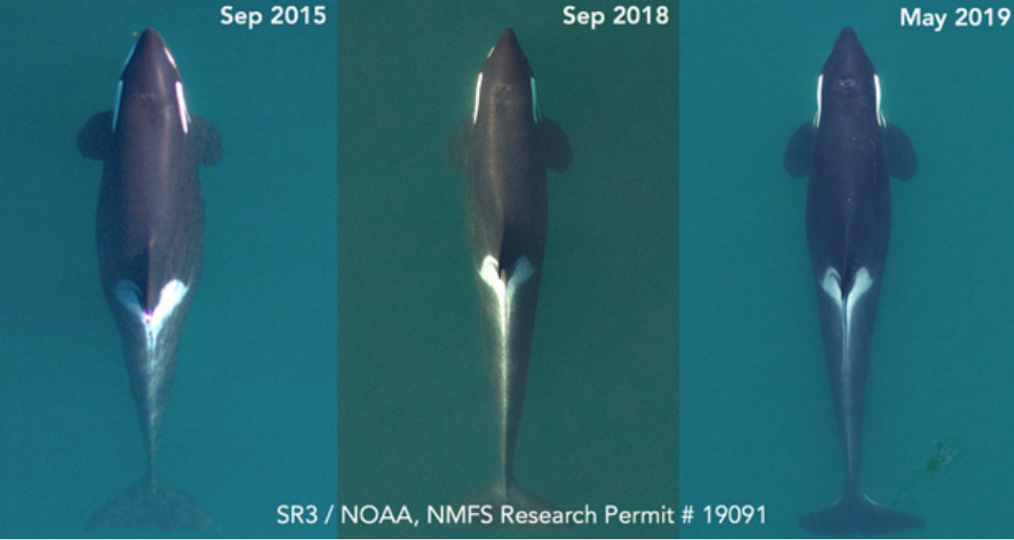 These whales need a plentiful supply of salmon year-round., The Columbia Basin – and especially the Snake River – historically produced the largest numbers of Spring Chinook anywhere on the West Coast – and provided critical food for orcas in the winter months when other Chinook populations are especially scarce. In its 2008 Orca Recovery Plan, NOAA acknowledges that orcas’ historic reliance on Columbia Basin chinook and describes its population declines as “[p]erhaps the single greatest change in food availability for resident killer whales since the late 1800s...”

Orca scientists have documented the orca malnutrition with aerial photographs. These images reveal many of the whales suffering from a condition known as “peanut head,” where the outline of the whale’s typically blubber-covered skull becomes visible.

Without a commitment in the Northwest to make some big changes very soon to restore and reconnect freshwater habitat critical to salmon recovery, orcas will continue to struggle to find sufficient quantities of chinook needed to survive and begin to recover. Over the course of this summer, the Hot Water Report will periodically check in on these whales whose fate is so deeply intertwined with the salmon.