Welcome to the Snake and Columbia River Hot Water Report, Week 4. This weekly report during Summer 2019 presents conditions - including water temperatures and status of salmon and steelhead returns - on the lower Snake and Columbia rivers via graphs, analyses, and stories. The harmful effects on struggling fish populations caused by federal dams and their reservoirs is now being exacerbated due to our warming, changing climate.

Each week’s report gives a real-time update on water temperatures in the lower Snake and Columbia River reservoirs, the highest weekly temperature in each reservoir, and the status of adult returns for different species as they make their way back toward their natal spawning grounds. We’ll hear from scientists, tribal fishers, fishing guides, and salmon and river advocates about challenges facing the Columbia and Snake rivers - and the opportunities to improve their health and begin to rebuild healthy, resilient fish populations and the many benefits they deliver to Northwest culture, economy and ecology.

High sustained summer reservoir temperatures in the Columbia and Snake rivers are now routine in the basin during the summer months. Salmon and steelhead begin to suffer harmful effects when water temperatures exceed 68° Fahrenheit. The longer temperatures remain above 68° and the farther the temperatures rise above 68°, the greater the harm, including increased energy expenditure, increased susceptibility to disease, reduced fecundity or reproductive potential, and/or death.

The daily mean temperature at the forebay - the upstream side of each dam - is represented with solid lines, while the 10-year average (2009-2019) for each reservoir is represented by the dashed line of the same color. For this report, 10-year historic data was only available for 4 of the 8 dams we will be monitoring. Finally, the dotted line across the top of the graph represents upper end of the 68° “comfort zone” for juvenile and adult salmon. 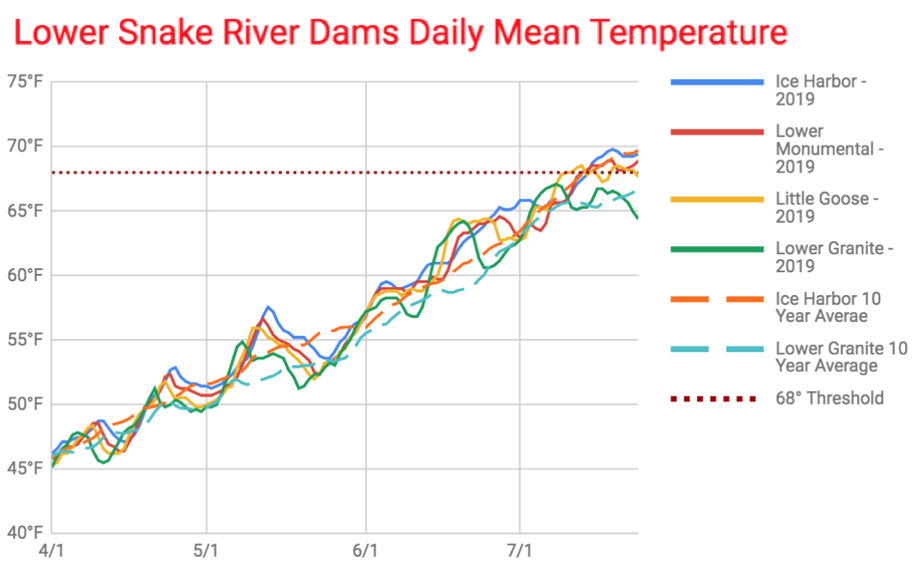 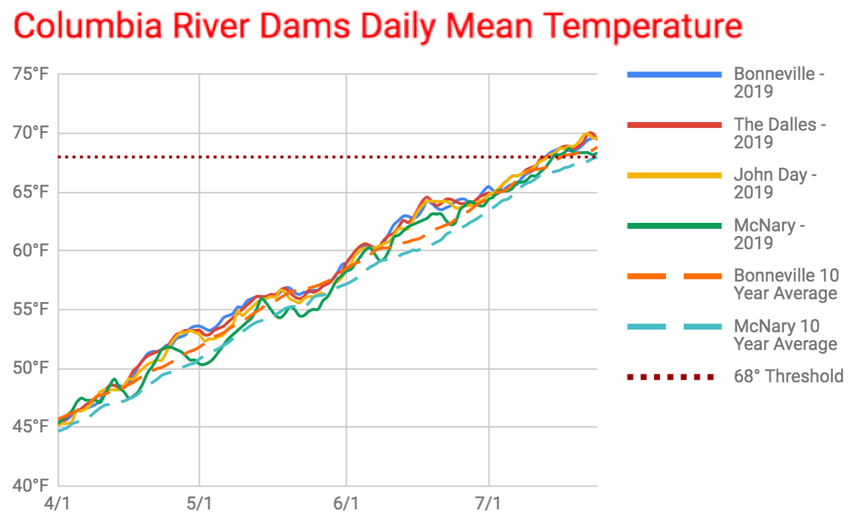 Every day for the past week, the four lower Columbia River dam reservoirs exceeded 68°F threshold, and the Dalles and John Day both exceeded 70°F for multiple days. 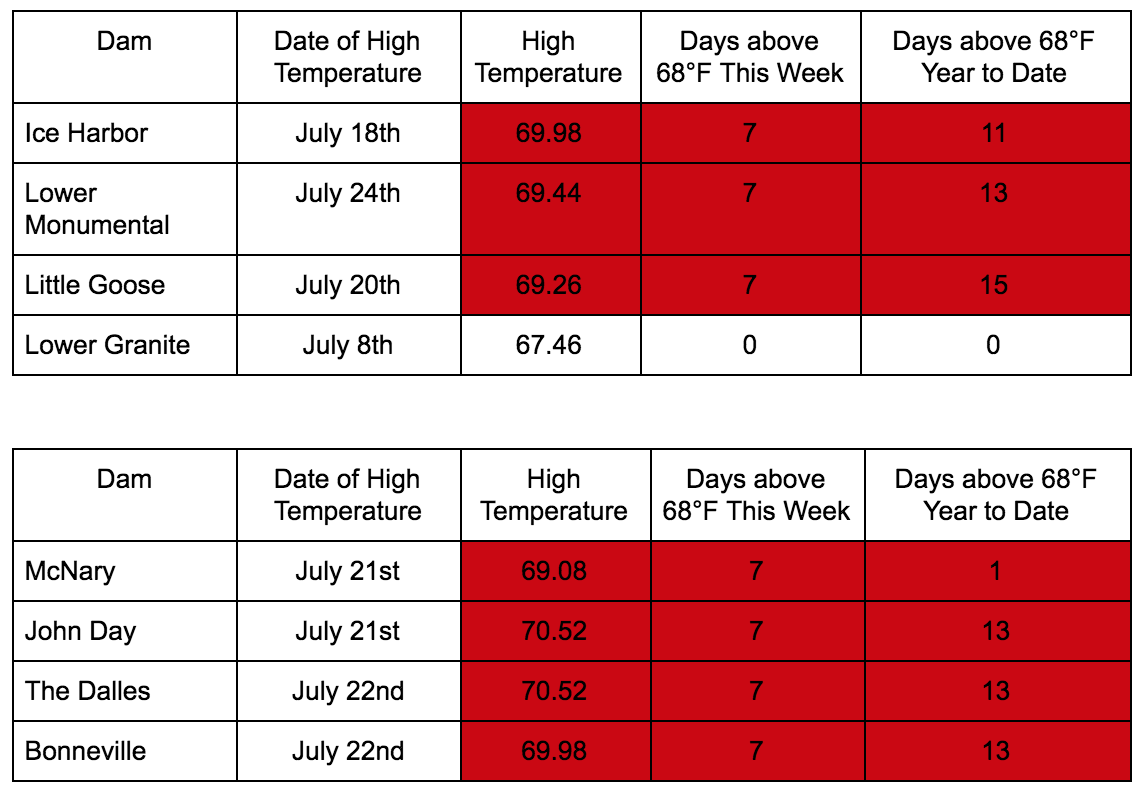 Apart from Lower Granite dam, every reservoir in this system reached temperatures every day this past week that are above the “safe” level for salmon and steelhead. Remember, the longer and higher that temperatures remain above 68°F, the more the negative impacts on salmon and steelhead accumulate. If temperature trends remain this way for the end of August, we should expect to see wide-spread harms, including disease and death, of adult (headed upstream) and juvenile (headed downstream) salmon and steelhead migrating through these reservoirs. 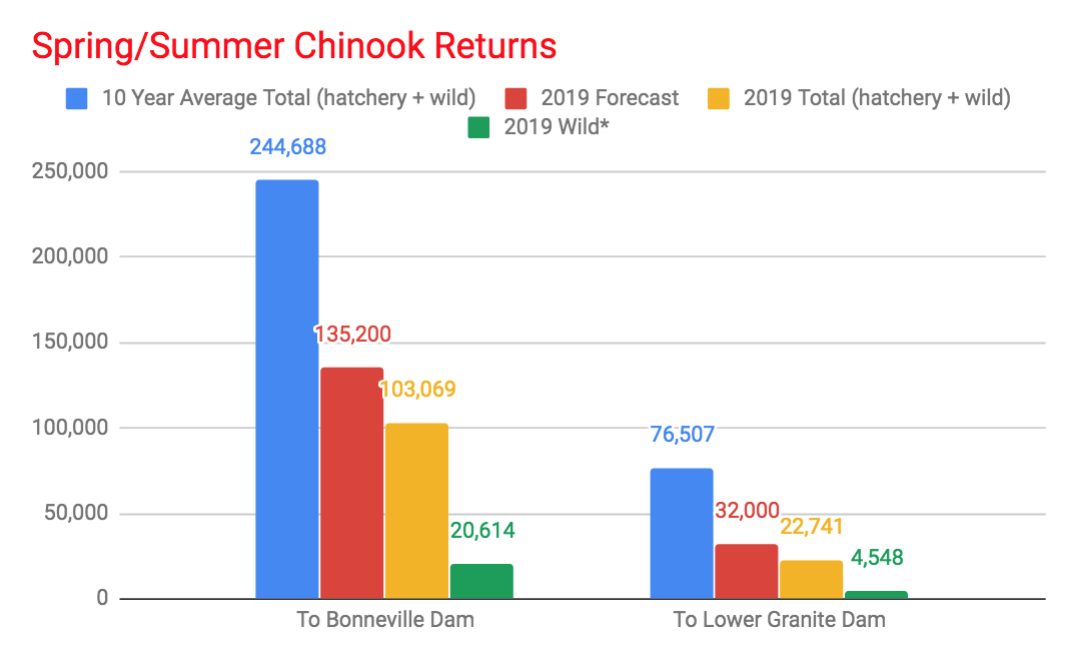 This week, we are returning to check in on chinook salmon returns to the Columbia/Snake Basin. In Issues 1 and 2, we looked at year-to-date returns for spring and summer chinook, respectively. We are now seeing the tail-end of these runs, as these salmon are classified as those that return between April 1st and July 31st. This week, we look at the 2019 end-of-season returns and compare that to fisheries agencies’ 2019 pre-season predictions as well as to the 10-year average return.

Neither comparison is encouraging. Spring-summer Chinook salmon returns this year fall FAR below the 10-year average and well below the pre-season estimates.

The extremely low returns this year resulted in early chinook fishing closures in both Idaho and Washington, inflicting new economic harms to the coastal and river communities that depend on these fish for their livelihoods.

Restoring Rivers to Revitalize Communities – Part 1: Fishing Economies in the Columbia/Snake Basin and Beyond

Healthy, abundant salmon populations not only deliver innumerable ecological benefits to the Northwest, but are also integral to cultures and economies - tribal and non-tribal - of the region. And when salmon disappear, communities suffer due to a lack of opportunity that these fish would otherwise provide. In this week’s issue, we briefly explore some of the impacts that a restored river - and salmon and steelhead - will provide to commercial and recreational fishing communities. Next week, we will examine how the region’s tourism and river recreation would further be revitalized with the return of a free flowing river and sustainable, fishable salmon returns. 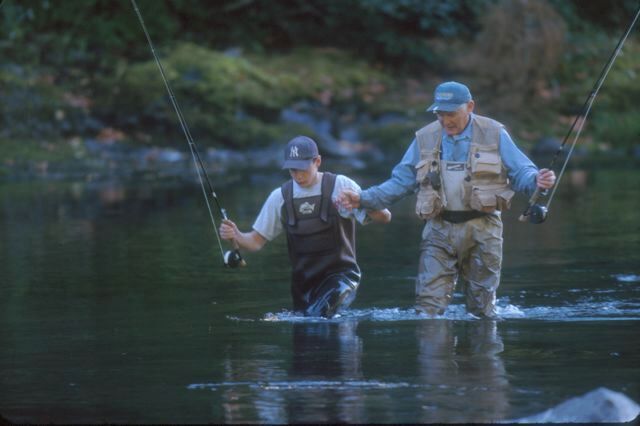 The economic benefits that a restored salmon run would provide to inland communities are huge. According to Stephen Pfeiffer, Conservation Associate at Idaho Rivers United, “while Snake River salmon and steelhead returns drop, Idaho continues to miss out on an economy worth more than half a billion dollars, which would support towns and citizens across the state.” Pfeiffer is referencing a 2005 economic study found that fully restored salmon and steelhead runs could deliver as much as $550 million to Idaho alone, $300 million of which would go to small rural communities.

Of course, communities in Oregon and Washington would also reap big benefits from a restored river and salmon. Restoring the lower Snake River would generate new economic activity in Washington State worth approximately $470 million in the sport fishing sector and $72 million in commercial fishing each year. Along the lower river near Vancouver (WA) and Portland (OR), thousands of salmon-dependent jobs and hundreds of thousands of anglers have fished the river for generations. And Northeast Oregon would see dramatic increases in salmon and steelhead returns in historic rivers like the Grand Ronde, Umatilla and Imnaha. Economists estimate that healthy fish populations would bring in hundreds of millions of dollars to each of the Northwest states annually, and help revitalize often-rural communities and economies around the region.

Among stakeholders who are connected to salmon and watersheds they inhabit, fisherman have made some of the greatest sacrifices to date. Coastal communities have traditionally relied heavily on fisheries for livelihood and economic development, but declines of salmon originating in the Columbia/Snake Basin have constrained fishing opportunities, closed seasons, and reduced incomes and eliminated jobs.

A report by the Institute for Fisheries Resources estimates that full recovery of Columbia River Basin stocks could generate $637 million per year for commercial fishing industries, $127.4 million which would be directly attributable to Snake River stocks. And commercial fishing communities as far away as southeast Alaska would benefit. Alaskan salmon trollers catch Columbia Basin king salmon, and their fisheries quotas have been reduced over the last few decades to protect endangered fish stocks that swim among the healthy, harvestable populations. 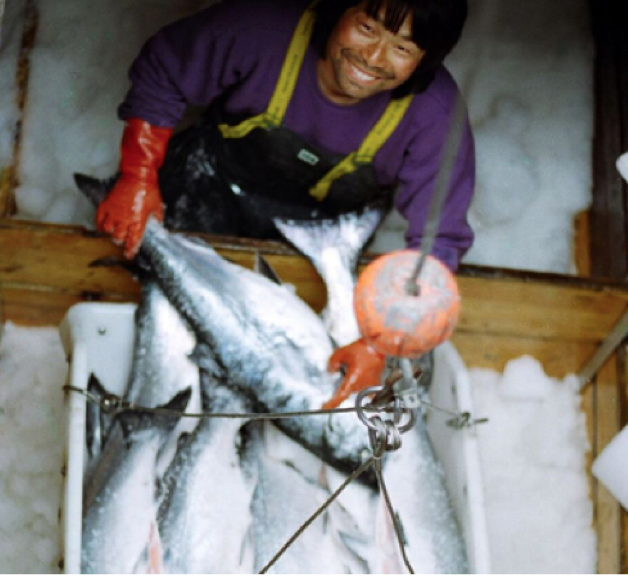 For decades, the federal agencies in the Northwest have insisted on policies that pit important food producers – fishermen and farmers – against each other. Salmon fishermen continue to suffer from loss of opportunity, while grain growers receive small benefits from lower Snake River dams through subsidized grain transportation and small amount of irrigation. Wild salmon and Inland Northwest wheat are both highly valuable resources to the people of our region, and we need new policies that can sustain both communities.

Under current conditions, Northwest communities are missing economic and other opportunities that healthy, sustainable salmon populations provide. Restoring the lower Snake River and its endangered  salmon and steelhead populations will revitalize struggling fishing-based economies in the Pacific Northwest - from the Oregon Coast to inland Idaho, and all the way up to Southeast Alaska.