Welcome to the Hot Water Report, Week 7. This weekly report during Summer 2019 will present conditions - including water temperatures and status of salmon and steelhead returns - on the lower Snake and Columbia rivers via graphs, analyses, and stories. The harmful effects on struggling fish populations caused by federal dams and their reservoirs is now being exacerbated due to our warming, changing climate.

Each week’s report gives a real-time update on water temperatures in the lower Snake and Columbia River reservoirs, the highest weekly temperature in each reservoir, and the status of adult returns for different species as they make their way back toward their natal spawning grounds. We’ll hear from scientists, tribal fishers, fishing guides, and salmon and river advocates about challenges facing the Columbia and Snake rivers - and the opportunities to improve their health and begin to rebuild healthy, resilient fish populations and the many benefits they deliver to Northwest culture, economy and ecology.

The daily mean temperature at the forebay - the upstream side of each dam - is represented with solid lines, while the 10-year average (2009-2019) for each reservoir is represented by the dashed line of the same color. For this initial report, 10-year historic data was only available for 4 of the 8 dams we will be monitoring. Finally, the dotted line across the top of the graph represents the upper end of the 68° F “comfort zone” for juvenile and adult salmon. 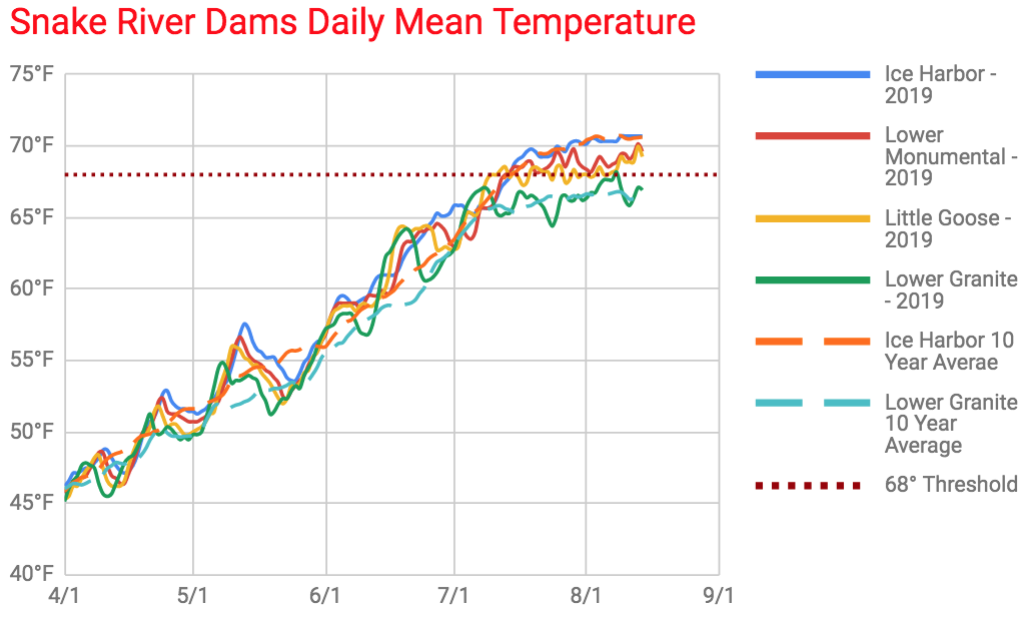 Harmful water temperatures continue in the lower Snake and lower Columbia river reservoirs: Temperatures on the lower Snake River are continuing their upward trajectory, although luckily this week the increase was not as dramatic as it has been in the previous weeks. That being said, three of the four reservoirs had average temperatures that were well above the safe 68°F threshold for salmon. The reservoir at Lower Granite, the furthest upstream and the one that receives cool water benefits from cold water inflow from Dworshak reservoir, spent most of the week below this threshold, but still is primarily at temperatures that exceed the 10-year averages. 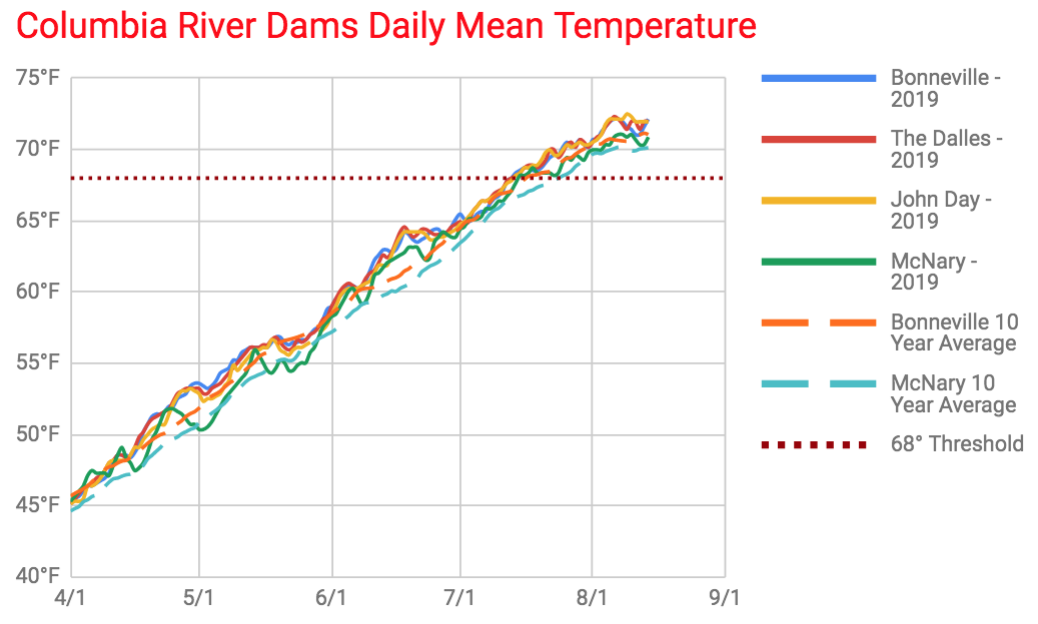 Columbia River temperatures have also begun to slow their dramatic increase. However, all reservoirs experienced average temperatures that were at least 2.5°F over the safe threshold of 68°F. And remember, the longer and higher that temperatures remain above this threshold, the more the negative impacts on salmon accumulate. 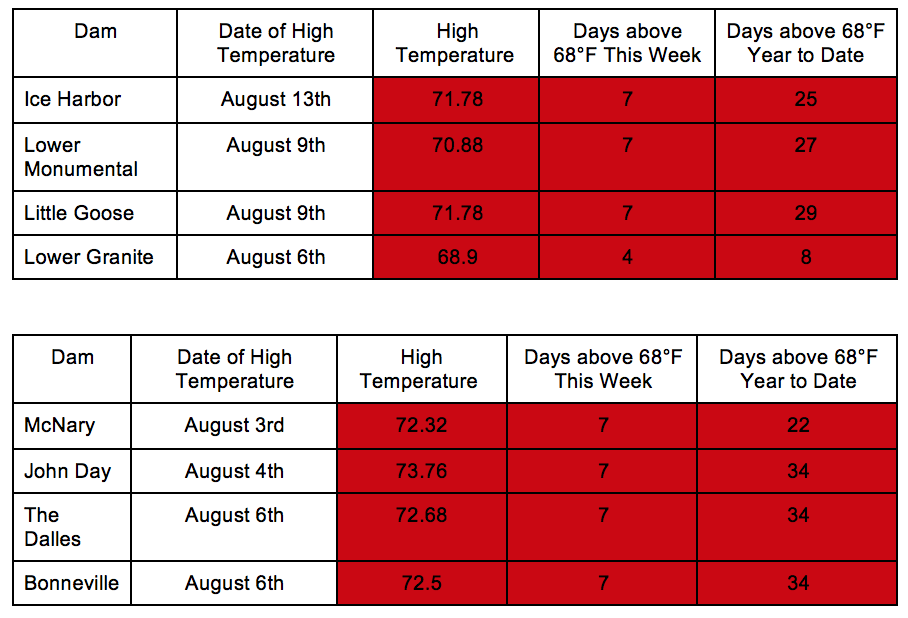 High temperature trends this week are eerily similar to what we saw last week, with seven of the eight dams reaching temperatures above what is considered safe for salmon and steelhead every day this past week. The first three dam reservoirs on the lower Snake River beat out their high temperature records for this year. And although temperatures this week along the Columbia did not exceed the blisteringly hot ones observed last week, each of the reservoirs remained well above the safe 68° degree threshold.

Forecasts for this year are less than 50% of the 10-year average, but we’ll be lucky if we see even that many fish return. Last year’s combined forecast for steelhead was 182,400 fish, but the actual return to the Columbia Basin was far lower at 94,000 fish (with roughly 75% hatchery-origin).

So far, steelhead returns to both Bonneville Dam (on the lower Columbia) and Lower Granite Dam (on the lower Snake) are trending lower than last year, and are dramatically depressed when compared to 10-year averages. As of August 15th, both dams have only had return rates of 30% of what is typically seen by this date. Unless we see a sudden upswing in steelhead returns (unfortunately not likely), the 50% prediction set by fisheries managers may prove a lofty goal.

Last week, orca scientists declared that three more southern resident orcas – one from each pod - are missing and presumed to be dead, bringing the entire population down to only 73 individuals. J17 was the mother of Tahlequah (J35), who spent 17 days last summer carrying and mourning her dead calf. K25 had been displaying signs of starvation since last winter, orca scientists stated, and there had been concerns regarding his survival for some time. But the death of L84 may be the most tragic of all, as his death marks the loss of an entire matriline.

These three deaths, and Southern Resident orcas’ struggle for survival today, is largely attributed to a lack of food – particularly chinook salmon. 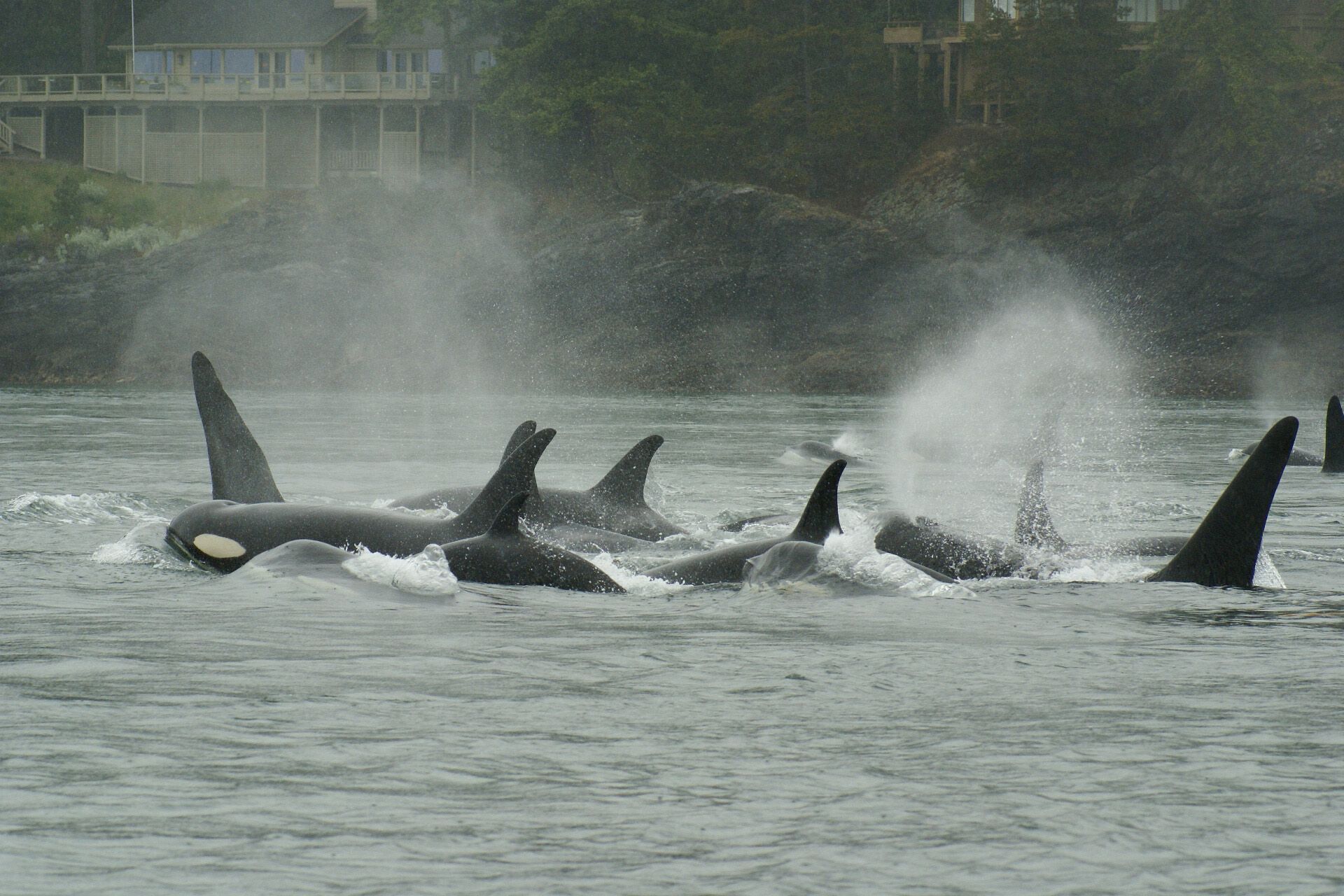 Chinook are the foundation of the Southern Resident orca diet. Orca scientists have determined that, at a minimum, the current population needs 317,000 chinook per year to sustain current numbers. But with chinook runs occuring at record low rates, the orcas will continue to struggle to find enough to eat. Furthermore, these fish are getting smaller - in the last 34 years the average chinook has shrunk by 20% in weight. This is forcing the orcas to hunt longer and harder in order to meet their nutritional needs.

Southern Resident orcas have historically been found in the waters surrounding the San Juan Islands in the Salish Sea during the summer months, feeding mainly on chinook returning to the Fraser River. This summer, however, the orcas have only rarely seen.

Scientists hope the whales have found - and are feeding on - abundant salmon elsewhere, but this has not been confirmed and remains hopeful speculation. Around the region, chinook returns have been at an all-time low. “We have seen chinook populations decline for the past number of years, but this year is the worst. It is a real challenge and a great concern,” said Jocelyn Lubczuk, spokeswoman for the Department of Fisheries and Oceans Canada told the Seattle Times.

Northwest people and policymakers must commit to making some big, bold changes - and quickly - if we are going to recover abundant salmon populations and protect the Southern Resident orcas from extinction. Scientists have told us that without many more salmon, we will lose the Southern Residents forever. Due to its historic productivity, large amounts of high quality habitat and high restoration potential, the restoration of chinook salmon in the Columbia Basin - and in the Snake River Basin in particular - is a critical, urgent piece of this puzzle.