Welcome to the Hot Water Report, Week 6. This weekly report during Summer 2019 will present conditions - including water temperatures and status of salmon and steelhead returns - on the lower Snake and Columbia rivers via graphs, analyses, and stories. The harmful effects on struggling fish populations caused by federal dams and their reservoirs is now being exacerbated due to our warming, changing climate.

Each week’s report gives a real-time update on water temperatures in the lower Snake and Columbia River reservoirs, the highest weekly temperature in each reservoir, and the status of adult returns for different species as they make their way back toward their natal spawning grounds. We’ll also hear from scientists, tribal fishers, fishing guides, and salmon and river advocates about challenges facing the Columbia and Snake rivers - and the opportunities to improve their health and begin to rebuild healthy, resilient fish populations and the many benefits they deliver to Northwest culture, economy and ecology.

The daily mean temperature at the forebay - the upstream side of each dam - is represented with solid lines, while the 10-year average (2009-2019) for each reservoir is represented by the dashed line of the same color. For this initial report, 10-year historic data was only available for 4 of the 8 dams we will be monitoring. Finally, the dotted line across the top of the graph represents the upper end of the 68° “comfort zone” for juvenile and adult salmon. 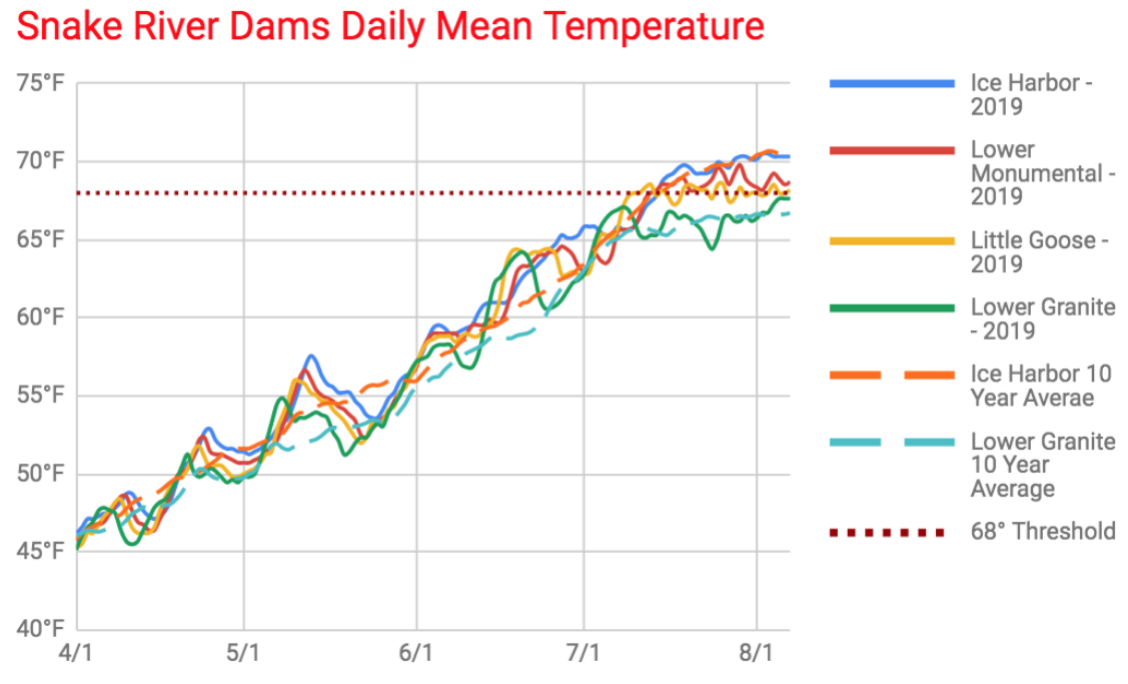 Harmful water temperatures continue in the lower Snake and lower Columbia river reservoirs: For the second week in a row, the lower three dams/reservoirs on the lower Snake River had daily average temperatures above 68°F - the temperature at which salmon begin to experience negative heat-related impacts to their health - all seven days. Lower Granite also peaked above 68 degrees for the first time this summer, despite continual inflow of cool water from Dworshak reservoir upstream. When comparing temperatures to the 10-year averages, the reservoir at Ice Harbor spent the majority of the week at temperatures above what has historically been seen. 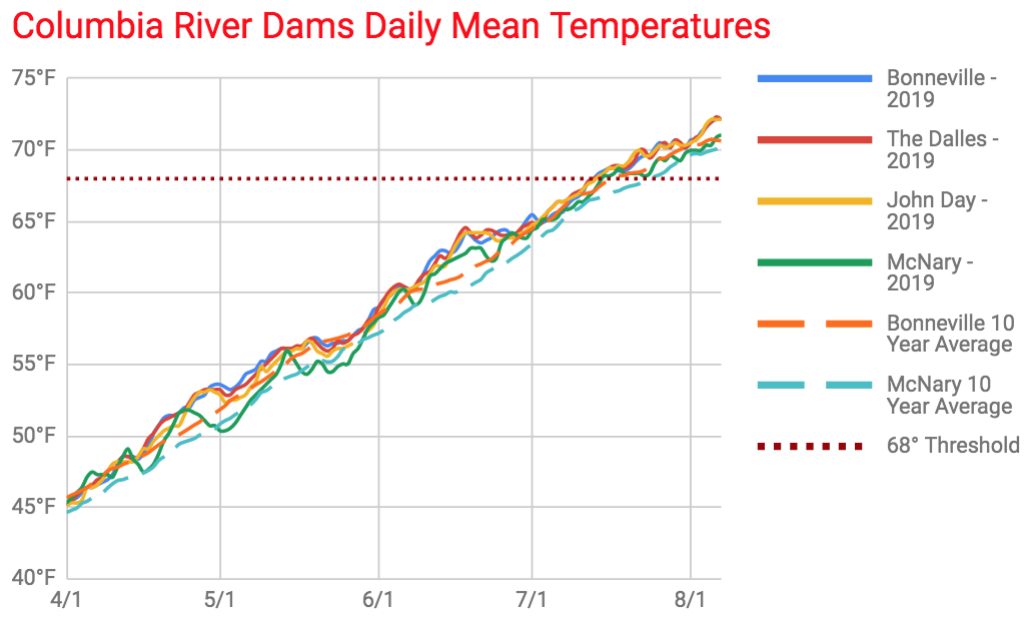 Columbia River temperatures continued their upward trajectory this week. Average daily temperatures at all four dam reservoirs exceeded 70°F for the majority of the week, and the reservoirs at both Bonneville and McNary dams continue to trend higher than the 10-year averages. 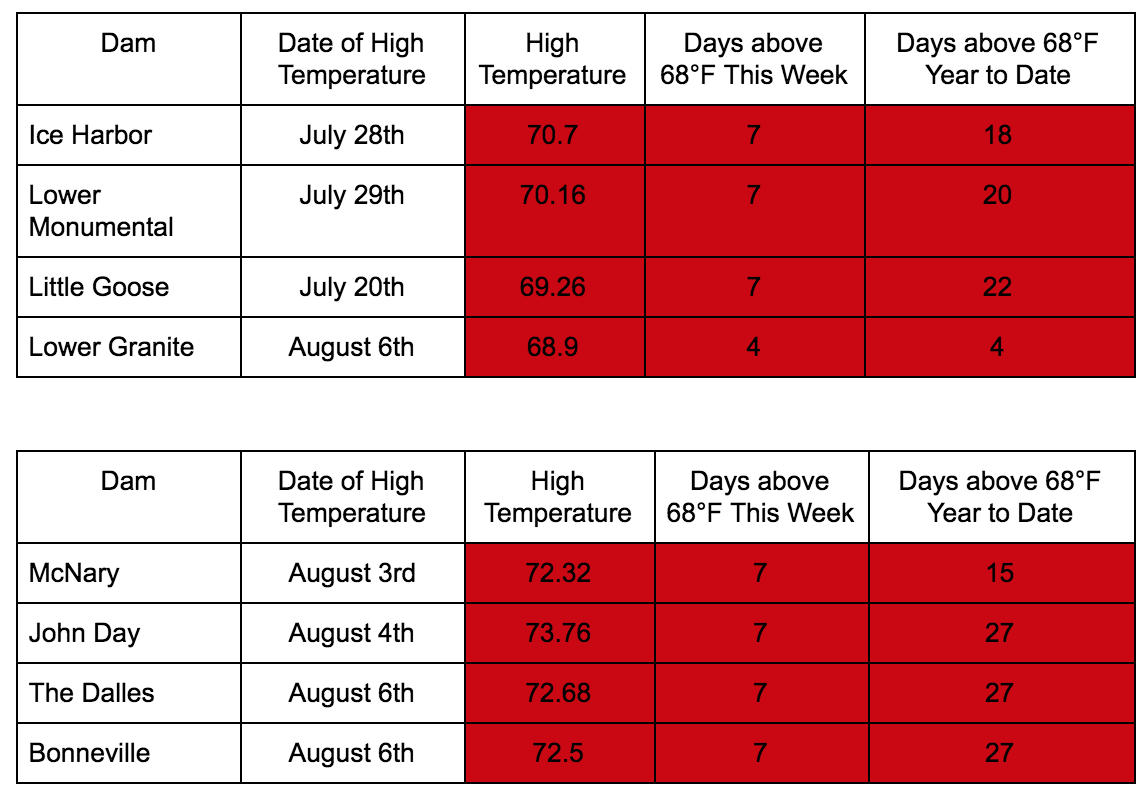 This is the first week that Lower Granite reservoir has joined the other seven in the above-68°F-club. This has occurred despite the Army Corps of Engineers implementation of water release from Dworshak dam to cool the reservoir waters. For the other dams, this is the second week that all seven days have reached temperatures above what is considered safe for salmon. And remember, the longer and higher that temperatures remain above this threshold, the more the negative impacts on salmon accumulate.

FEATURED FISH: Steelhead - a salmon or a trout?

**Unclipped steelhead are a subset of total steelhead counts, and provide an estimate for wild fish, although not 100% of hatchery steelhead have been clipped

Steelhead salmon are rainbow trout that exhibit an anadromous lifestyle - they migrate to the ocean as juvenile fish and return to fresh water as adults to spawn. 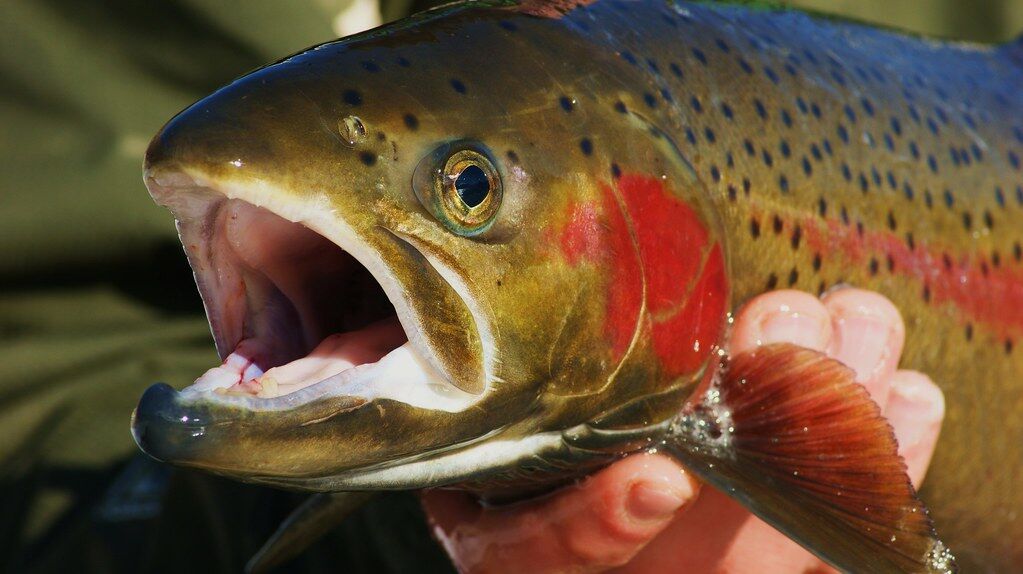 Steelhead in the Snake River are divided into A-run and B-run. A-run salmon return earlier in the year, typically June - August and are typically smaller than the B-run salmon that usually spend two years in the ocean and start their migration in late August - September.

Steelhead salmon are one of the top five recreationally fished species in North America, and in particular the larger B-run salmon are prized by recreational fishermen throughout the Columbia Basin.

Unfortunately, Idaho Department of Fish and Game is anticipating devastatingly low returns of these fish this year. A-run returns have been dismal, and B-run fish are predicted to be even worse. 5,600 fish expected to return this season, of which only 665 are wild fish. The number of steelhead that pass July through August is expected to be 46 percent of the 10-year average, while the number of fish that pass Bonneville August through October — fish that primarily return to Idaho waters — is expected to be just 24 percent of the 10-year average.

Despite the already low predictions, Terry Thompson of  Idaho Department of Fish and Game told KMTV that “we can predict with pretty good certainty that our returns are going to be less than what we had hoped for." Fishing regulations will be set later in the month once the IDFG can make their recommendation to the Fish and Game commission. For now, anglers and enthusiasts are encouraged to keep their steelhead fishing aspirations for the season low.

Climate, Courts, and the Columbia-Snake Basin

In 2016, a federal judge in Oregon, Michael Simon, concluded that the agencies responsible for managing the federal dams on the Columbia and Snake rivers (Army Corps of Engineers, Bureau of Reclamation, and Bonneville Power Administration) were operating under an invalid Columbia/Snake Salmon Plan. He concluded that their methods of operation violated the Endangered Species Act and National Environmental Policy Act (NEPA) in numerous ways.

In his ruling, Judge Simon stated that the 2014 plan “continues down the same well-worn and legally insufficient path taken during the last 20 years. … It also fails to adequately consider the effects of climate change.”

This was the fifth time a court had tossed out as illegal the federal government’s plan for managing the dams. But when compared to previous rulings, Judge Simon’s rejection was the most thorough. As part of his 2016 ruling, the Judge ordered the agencies to develop a new Environmental Impact Statement (EIS) for Columbia Basin salmon by 2021 (the Trump Administration recently shortened this timeline - the new date for plan completion is September 2020) that looks at the impacts of climate change and includes specific actions to address or mitigate these impacts. They must also include an alternative that carefully investigates the impacts of removing the four lower Snake River dams in order to restore this river and its salmon. 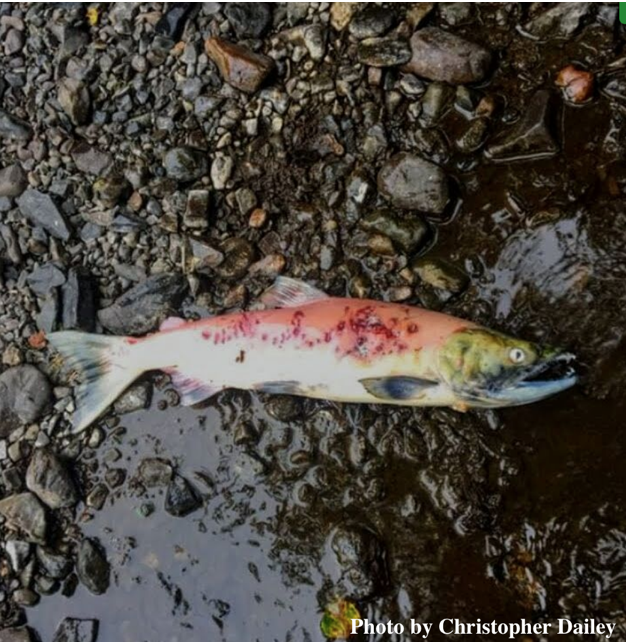 In the 2016 ruling, the court highlighted the fact that the federal agencies failed (again) to address climate impacts. “When the agencies prepare a new plan, if they do not identify actions to address the impacts of climate change, they proceed at their peril,” stated Todd True of Earthjustice. “It is critical that agencies, and all of us, recognize the effects of climate change on salmon survival - and address them with effective, urgent action now. The federal agencies have so far failed to do this.”

In early winter 2020, the federal agencies in charge will release their court-ordered Draft Environmental Review (or environmental impact statement). Early signals, however, indicate that the agencies may again choose to ignore good science and their legal responsibilities. “Information provided by the agencies so far does not indicate the kind of robust plan that is needed to actually address climate impacts on salmon and their river habitat,” according to Mr. True, "especially since those impacts are happening now and will get worse over time."

Despite irrefutable scientific evidence, including from federal agencies like NOAA, the dam agencies (BPA, ACOE, USBR) continue to downplay the harmful effects that climate change is having on water temperatures, snowpack and river flows - and therefore salmon. Based on what advocates have learned so far, Northwest people cannot rely on the federal government’s upcoming environmental review to deliver full, fair information or make scientifically defensible recommendations that are needed to protect and restore endangered salmon and steelhead populations. Leadership from elected officials in the Northwest is essential to prevent another failed federal salmon plan.  Regional policymakers must work with each other, key stakeholders and the public to develop a comprehensive, science-based solution that protects and restores endangered salmon and orcas - and invests in all of the communities that depend on the Snake and Columbia Rivers.