Speak up for salmon! The Draft EIS for Columbia and Snake River Salmon – A Resource Page

*** First and foremost, please observe the advice and guidance of local health professionals and do all you can to protect the health of your family and our communities at this unprecedented time.

*** Public hearings originally scheduled for March have been cancelled due to the rapid spread and community health risks associated with the coronavirus. "Virtual" meetings via phone have been scheduled in lieu of hearings. See details below.

*** SOS' advocacy workshops and other SOS-sponsored events are canceled for the foreseeable future.

*** Check back here regularly for updates and new developments. Thank you and take good care. 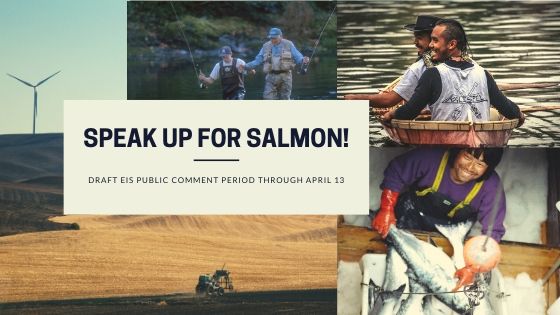 Introduction to the Feb. 2020 Draft Environmental Impact Statement for Snake-Columbia River Salmon and Steelhead: Produced by federal agencies under a 2016 court order, the Draft EIS analyzes several options for the future management of federal dams in the Columbia Basin, including one option that would remove the four dams on the Lower Snake River.

Unfortunately, despite the DEIS' recognition that restoring the lower Snake River would deliver the greatest survival benefits to Snake River fish compared to any of the other options, it instead recommends a Preferred Alternative with only minor modifications to a longstanding approach that has proven to be illegal, costly and ineffective over 25 years.

The scope of this EIS process is simply too narrow to deliver the kind of changes required to meet the needs of imperiled salmon populations and fishing and farming communities facing loss and uncertainty. Citizens in the Northwest and across the country must work together to use the current public comment period to contact elected officials in the Northwest and call for their urgent leadership and solutions.

We have a unique window of opportunity today for an unprecedented conservation and community success story in the Northwest: to restore the lower Snake River and recover its endangered salmon and steelhead populations and the benefits they bring to the people of the Northwest and nation.

Unfortunately, neither the federal agencies nor the Draft EIS will deliver the solution Northwest salmon and communities need. Right now, we need the urgent engagement and leadership of the region's policymakers working with stakeholders, sovereigns and citizens to develop and deliver a lawful, science-based solution that recovers salmon and steelhead populations and meets the needs of communities. What is the DEIS? DEIS is a Draft Environmental Impact Statement and it is being developed in accordance with the National Environmental Policy Act (NEPA) by the U.S. Army Corps of Engineers, Bonneville Power Administration, and the Bureau of Reclamation to assess the impact of the 14 federal dams on the survival of wild salmon and steelhead populations in the Columbia-Snake River System.

We're going through this process now because in 2016, the U.S. District Court in Portland (OR) rejected federal government's the 5th consecutive Columbia-Snake salmon plan. The court ordered the federal agencies to develop a new plan and to complete a NEPA review that considers lower Snake River dam removal as a key salmon recovery alternative.

Many stakeholders and sovereigns across the region are eager to avoid more litigation, however it seems likely given that the new plan is likely to include many of the previous plans' mistakes. In order to save salmon and the communities that rely on them, we must contact our elected leaders in the Northwest and demand their leadership and a lasting resolution. We need your help to do this!

The NEPA review began in Fall 2016; the Draft EIS was released on February 28th, 2020. Following the DEIS release, there is a (too short!) 45-day comment period for the public to provide feedback input. The series of six public hearings originally scheduled in March across the Northwest have been canceled due to the serious public health risks from the coronavirus. Virtual phone meetings have been scheduled in lieu of the hearings.

Given the fact that neither the federal agencies nor the DEIS process is capable of meeting the needs of Northwest salmon and communities, SOS is recommending a comprehensive solution that addresses three urgent issues. And we need Northwest policymakers working urgently to bring people together to develop a lawful, science-based plan that:

Here is what is happening in March and April and how you can get more involved:

(1) Submit your comments on the Draft EIS here!

(2) Phone into a one or more of the 'virtual public meetings'. The three leading agencies are hosting public call-in meetings in March to hear from the public about these important issues. March 17, 18, 19, 25, 26 and 31. Phone lines open 3:45-8:00 p.m PST. Toll free number: 844-721-7241. After calling the number above, enter this access code: 599-8146#. Speaking order will be determined once participants are connected and if they indicate interest in providing comments (3 minute time limit).

(3) Call and write your elected officials - especially the four Northwest governors and Northwest members of Congress: Right now, Northwest elected officials have an especially critical role to play to bring people together and to develop and then deliver a comprehensive plan that meets the needs of endangered salmon and orcas, and the region's communties and energy system. They need to hear from you today! Questions? Contact:

Here are some links to recent press coverage on this next phase in salmon recovery: