Wild Salmon & Steelhead News is produced by the Save Our wild Salmon Coalition. Read on to learn about the Columbia-Snake River Basin’s endangered wild salmon and steelhead, the many benefits they deliver to the people and ecosystems, and the extinction crisis they face today. Learn about our campaign to restore health, connectivity and resilience to the rivers and streams they depend upon in the Columbia-Snake Basin, and how you can get involved help protect and restore healthy, abundant and fishable populations.

Contact Carrie if you have questions or to discuss how to get more involved.

NOTE: Our 2020 work at SOS started off fast and furious. Before the arrival of COVID-19 pandemic, we were hard at work participating in Washington State Gov. Jay Inslee’s public meetings as part of his Lower Snake River Stakeholder process, reacting to Gov. Kate Brown’s letter to Inslee re: Snake River salmon recovery and the need for Northwest solutions; and preparing for the release of the federal government’s Draft Environmental Impact Statement for Columbia-Snake salmon and dams and the public comment period now underway. More on all of these priorities below.

TABLE OF CONTENTS:
1.  On the Coronavirus
2.  SOS Action Alert – Submit your comments to the federal government and Northwest policymakers re: the shortcomings of the 2020 Snake-Columbia Salmon Draft EIS - and need for a comprehensive Northwest solution
3.  About the Snake-Columbia River Salmon Draft EIS
A. Why the DEIS fails and what we need to replace it
B. Public Comment in the time of the COVID-19 pandemic: No public hearings. No extended comment deadline.
C. Emerging Northwest stakeholder and policymaker leadership
4. Other news and developments
A. Predicted Columbia and Snake river salmon and steelhead returns
B. Governor Inslee releases Washington State’s Final Lower Snake River Dams Stakeholder Forum Report

1. A few thoughts on the Coronavirus

The pandemic is now in full stride moving across the United States and the planet. A top priority for Save Our wild Salmon at this time is to ensure the health and safety of our staff, partners, supporters and communities. As we do our part to ‘flatten the curve’ and slow the infection rate, SOS staff is continuing to work – but we are at home, sheltering in place and following the guidance of local health experts and elected officials. This is a very difficult time for everyone – we’re out of our normal routines, our interactions with others are limited – and increasingly mediated by phones and the internet. It is disorienting, unsettling, and uncertain. We, our families and friends and communities face an unprecedented health emergency. The information and circumstances and best practices keep changing. At this difficult time, we hope that you and yours are well and that you are able hunker down with your loved ones and be safe.

2. SOS' Snake-Columbia Salmon and Dams Draft EIS Action Alert: Send your comments to the federal agencies and Northwest policymakers today!
The Snake-Columbia Draft Environmental Impact Statement comment deadline is April 13. Read on below to learn a lot more about the federal government’s inadequate roadmap for managing the federal hydrosystem for salmon recovery, but PLEASE ACT NOW to speak up for salmon, orca, fishing and others communities. SOS is collecting signatures and will deliver them to the federal agencies and the elected officials in the Pacific Northwest who are needed to bring people together and lead us toward real, lasting, science-based solutions for everyone involved – including a restored lower Snake River! 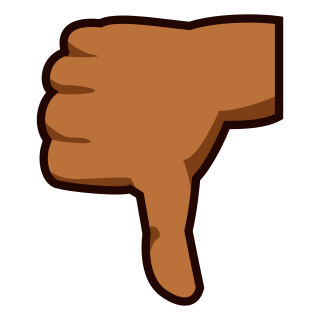 A. Why the federal government’s “new” salmon plan for Columbia Basin salmon and dams fails salmon, orca and communities - and what we need to replace it.
The federal government’s “new” roadmap (Columbia River System Operations Draft Environmental Impact Statement – or CRSO DEIS) for protecting and recovering endangered Snake and Columbia river salmon and steelhead – and the irreplaceable benefits they bring to people and ecosystems – was released on Feb. 28. It disappoints but does not surprise: this latest effort recommends at best modest tweaks to an approach that has failed Snake and Columbia river salmon and Northwest communities for more than two decades. Calls for “a major overhaul” dating back to the 1990s from the courts, salmon and fishing advocates, Tribes, scientists and many others continue to go unheeded.

Northwest people and taxpayers have spent $17B on Columbia-Snake salmon recovery efforts; the U.S. District Court in Portland has rejected five consecutive federal plans; we have not recovered a single salmon population and today, salmon returns are among some of the lowest on record today. Salmon and steelhead and the people and businesses of the Pacific Northwest urgently need a dramatically new approach.

Even if the federal agencies – BPA, Army Corps and Bureau of Reclamation – wanted to step up and develop a comprehensive solution that finally and truly addresses this salmon/community crisis, they don’t have the mission or the authorities to do so. The comprehensive solution that Northwest salmon and people need requires big changes and the engagement and leadership of our elected officials. Without political leadership, the costs, pain, losses, and uncertainty of the status quo will persist and very likely escalate.

The long-term comprehensive solution salmon and people need must:

But the agencies can’t do this. This requires Northwest people working together with the support and active leadership of Northwest elected officials. And there's encouraging news on this front. We’re beginning to see the requisite political leadership emerge – with, for example, Rep. Mike Simpson, Gov. Kate Brown and Gov. Inslee (see links to further information below). And we’re seeing stakeholders fed up with the status quo beginning to talk and work together about new approaches and solutions that can bring everyone forward together.

But we still need more – constructive, urgent engagement by policymakers, stakeholders and sovereigns. 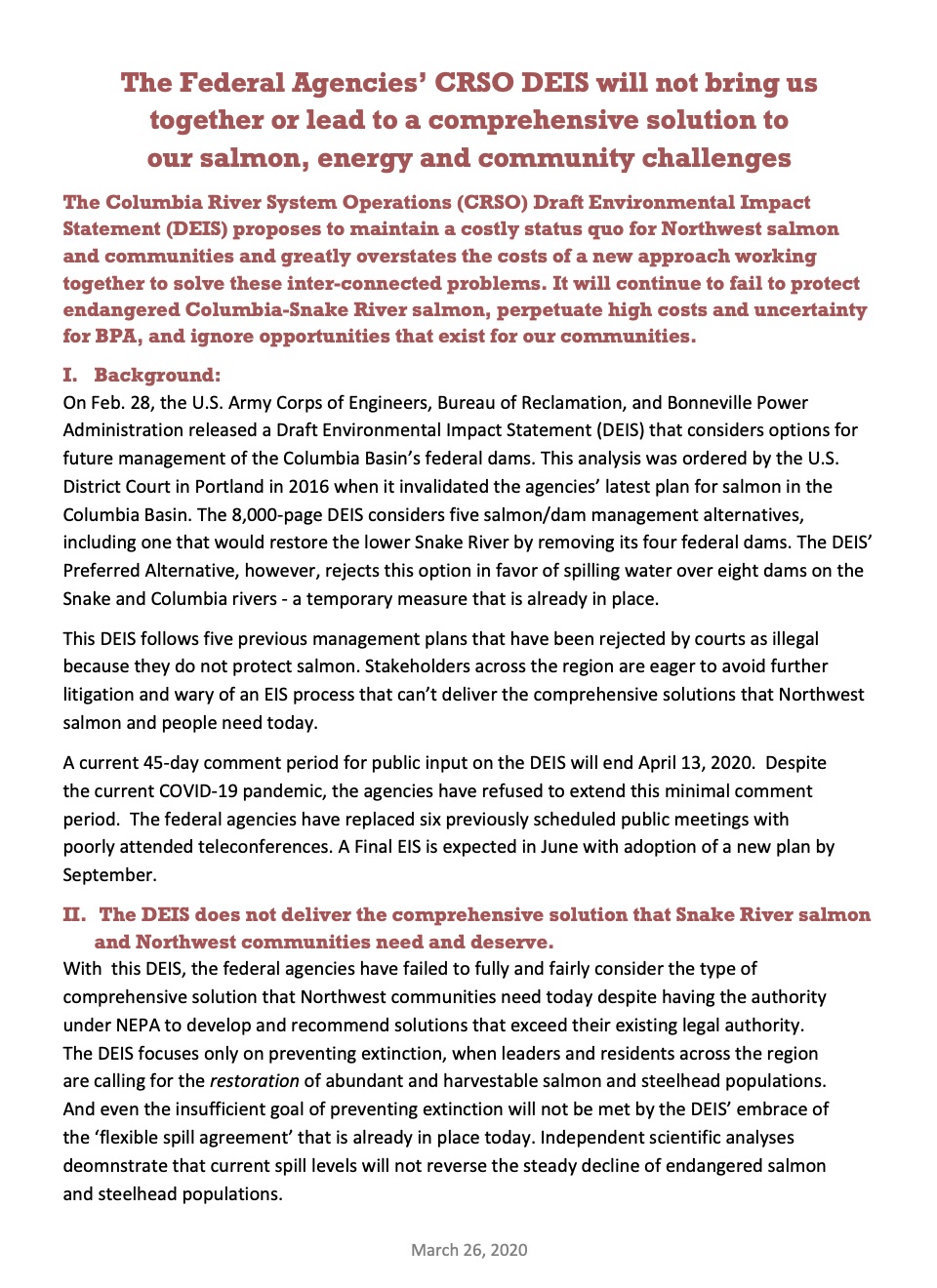 You can help by calling and writing your Governor and members of Congress. Click HERE for their numbers and suggested messages.

And here are some links to further information on the “new” DEIS, the public comment period and emerging political and stakeholder leadership:

- SOS Factsheet #1 on the DEIS’ shortcomings.

B. Public Comment during the COVID-19 pandemic? No public hearings. No extended comment deadline.
On Feb. 28, the federal government released its 8,000 page Draft EIS and opened a 45-day public comment period. The shortest that is legally allowed. Under pressure, the agencies eventually canceled six regional public meetings and replaced them with call-in opportunities. But that is the only change the agencies have made to the DEIS public comment process. In the face of an unprecedented pandemic requiring unimaginable risks and disruption, the federal government has refused to extend the comment deadline or postpone and reschedule the public hearings.

SOS led the charge in March – organizing three separate NGO sign-on letters addressed to the federal agencies and appealing to them to modify and extend the public comment period in response to the COVID pandemic. The issues at the heart of the DEIS - salmon and orca extinction, and the health and future of Tribal and non-tribal communities - are too important and the implications too great to senselessly rush this process. To date, we have not heard back from the agencies in response to our three letters. At this time, we expect the public comment period to close, as originally scheduled in just two weeks - April 13.

C. Emerging Northwest stakeholder and policymaker leadership
In contrast to a stubborn, cynical and short-sighted federal government, there are signs of hope in the Northwest - emerging stakeholder and policymaker leadership and support for a new, collaborative way forward for salmon and communities. Below find links to some recent letters, articles and guest opinions in Northwest newspapers reflecting growing momentum from Northwest stakeholders and political leaders calling and pushing for a new approach and a comprehensive solution for salmon and communities.

We are making progress - see the links below - but more is urgently needed.

- On February 11, Gov. Kate Brown (OR) sent a letter to Gov. Inslee (WA) offering her help and seeking his partnership in support of comprehensive, collaborative regional solutions, including the restoration of the lower Snake River through dam removal.

On Feb. 24, Save Our wild Salmon's Joseph Bogaard co-signed a letter from 17 leaders from utilities, conservation organizations and a port to the four Northwest governors letter calling for an inclusive regionally-led effort to develop a plan that recovers salmon, invests in communities, supports an affordable, reliable energy system and upholds our nation's tribal treaty responsibilities.

On March 13, in the Statesman Journal (OR) - a guest opinion by farmer and fishing guide Grant Putnam: Bring our salmon back, make our energy clean and affordable, and strengthen communities.

On March 14, in the Register Guard (OR) - a guest opinion by Chris Daughters: Leadership casting for a brighter future.

On March 15, 12 central Idaho community leaders sent a letter to Gov. Little and Idaho Congressional delegation members urging swift action to recover salmon and steelhead populations that are critical to their economies. Read about it here in the Idaho Statesman.

On March 23, in the Spokesman Review (WA) - a guest opinion by Joseph Bogaard (SOS) and Chad Jensen (Inland Power and Light): Snake River decision must provide solutions for all sides. 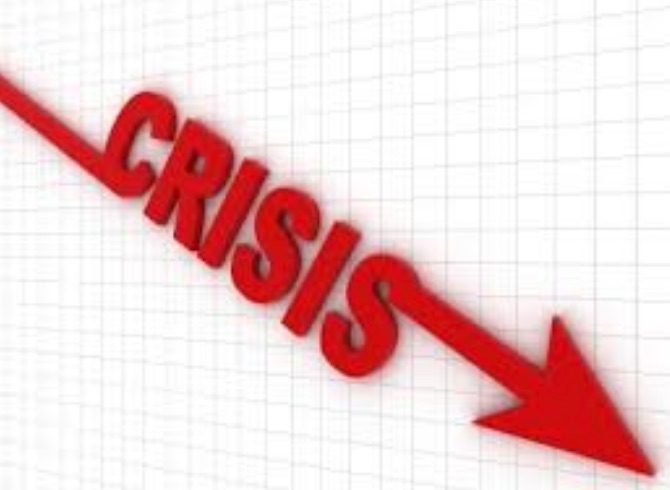 A. Predicted 2020 Columbia and Snake river salmon and steelhead returns - another grim year.
As if we need any new reminders about the urgent need for action and grim state of affairs today for endangered wild salmon and steelhead populations in the Snake and Columbia rivers, here are some links to information from fisheries managers in Washington and Oregon re: predicted fish returns in 2020.

Ironically - or tragically - on the same day (Feb. 28) that the federal government released its indisputably inadequate Draft EIS, Washington State Department of Fish and Wildlife released its predictions for adult returns for Columbia Basin salmon and steelhead in 2020: "Fishery managers say the coming year may be another tough one for anglers in Washington, with low salmon returns expected again in 2020...still well below the most recent 10-year average...a sharp decrease from the 2019 forecast...salmon fisheries will likely be more constrained than last year." 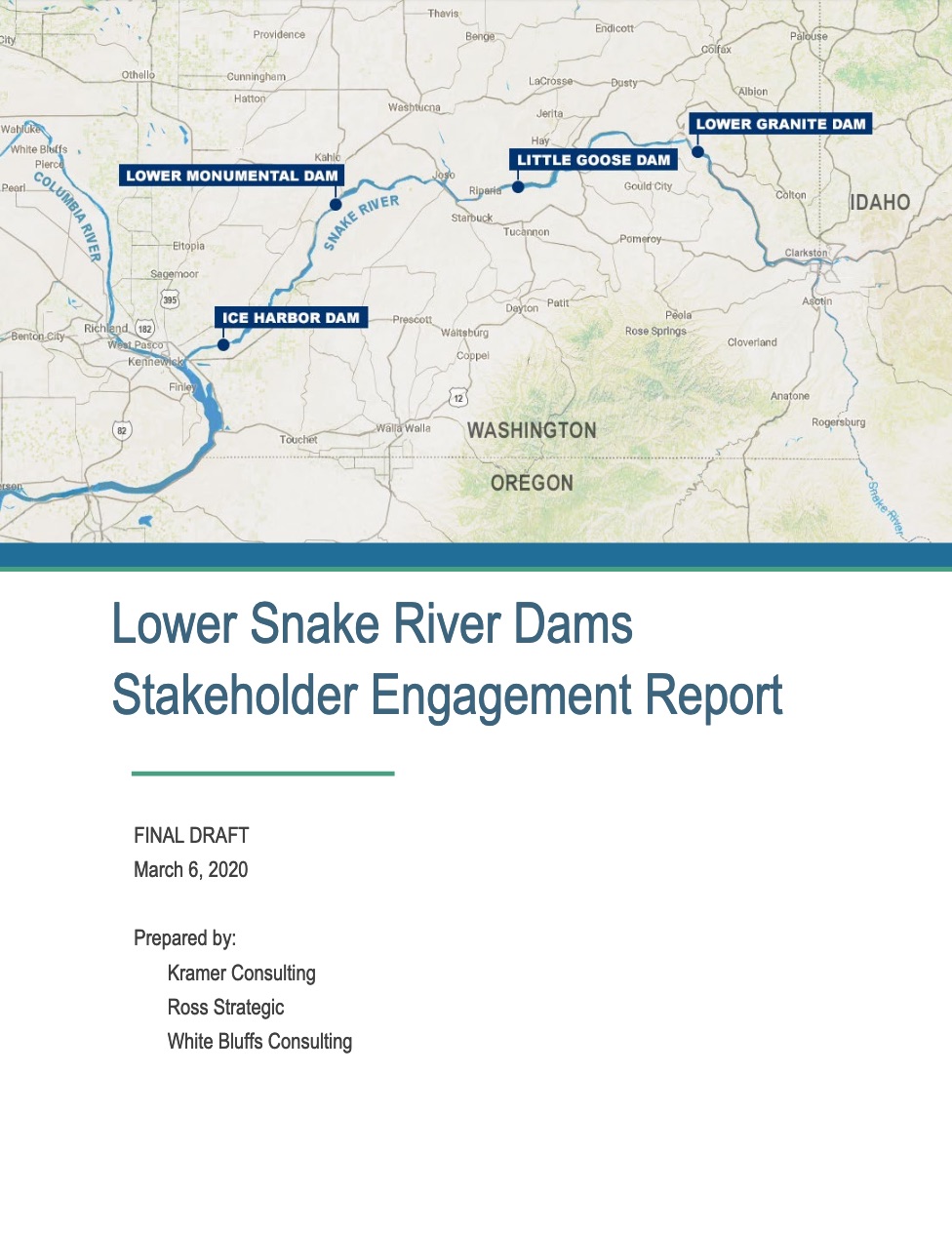 In early March, though largely lost amid the escalating coronavirus pandemic, Gov. Inslee released the final report for the Washington State Lower Snake River Dams Stakeholder Process. The final report looks very similar to the Draft version from December. Notably, there is a little more attention paid to the economic communities - sport and commercial fishing businesses on the coast and inland that have made big sacrifices over time in terms of fishing opportunity, business activity, lost income and jobs in order to help meet conservation goals and reverse declining salmon and steelhead populations. No other communities - save Northwest Tribal communities of course - have made such dramatic sacrifices over time. SOS and its conservation and fishing member groups appreciate the increased attention to these communities and their sacrifices in recent decades.

SOS also greatly appreciates the Washington State legislature for providing full funding for the LSR stakeholder process in the 2019 legislative session and to Governor Inslee and his team for effective implementation of the process in Year 1. The 90+ interviews, the three public meetings, and the Final Report all demonstrate the Washington and Northwest citizens are able and interested in discussing difficult topics - like the fate of the lower Snake River dams - and exploring together possible solutions that will recover endangered salmon and steelhead populations AND take care of and invest in important, affected communities at the same time.