Unsustainable and indefensible: the new economics of the lower Snake River dams

The lower Snake River dams were originally conceived to establish a 140-mile shipping corridor that would connect to the Columbia River and create an inland seaport in Lewiston, Idaho. The dams’ energy capacity was added late in the planning process by the Army Corps of Engineers to increase the project’s overall economic benefit and improve the chances of Congressional approval - and appropriations.

While the dams’ anticipated impacts on salmon and steelhead populations was held understood - they were opposed at the time by all Northwest state’s fish and game departments - the net positive economic benefit asserted by the Army Corps went largely unchallenged in the 1960s. More recently, however, steeply declining salmon populations, a series of expensive, ineffective and illegal federal salmon plans, a determined lack of transparency by the federal dam agencies, and the rapidly changing market forces in the energy and transportation sectors has attracted new scrutiny about these four dams overall costs and benefits. Independent observers and a series of reports in recent years makes it increasingly difficult to justify further investment in these high-cost, low-value dams on the lower Snake.

Built last century, the four lower Snake River dams produce less than 1,000 aMW of electricity each year - about 4 percent of the Northwest’s supply. More recently, the cost of wind and solar has plummeted, the capacity from renewables expanded, and the regional electric grid is rapidly evolving. We’ve become much smarter about how we generate, consume, and manage electricity.

Our region, for example, has recently developed 2,500+ average megawatts (aMW) from wind, solar, geothermal and biomass energy - with more currently under construction. And we’ve saved 5,500+ aMW of electricity in the last several decades through smart investments in energy efficiency. While the cost of renewables has plunged, the cost of maintaining and operating these four aging federal dams is steadily rising.

Trends on the transportation corridor are similar: decreasing demand and increasing costs. Shipping on the lower Snake River has declined by 70% in the last two decades. Private/public investments are expanding rail networks locally and helped facilitate a shift by many farmers and other businesses to transport their products by train rather than barge.

Our greatest asset is our ingenuity and ability to adapt. We don't have to choose between wild salmon, affordable low-carbon energy and reliable transportation. Working together, the people of the Northwest and the nation can craft a lawful, scientifically- and economically-sound plan that restores our wild salmon and meets the energy and transportation needs of the region’s communities. 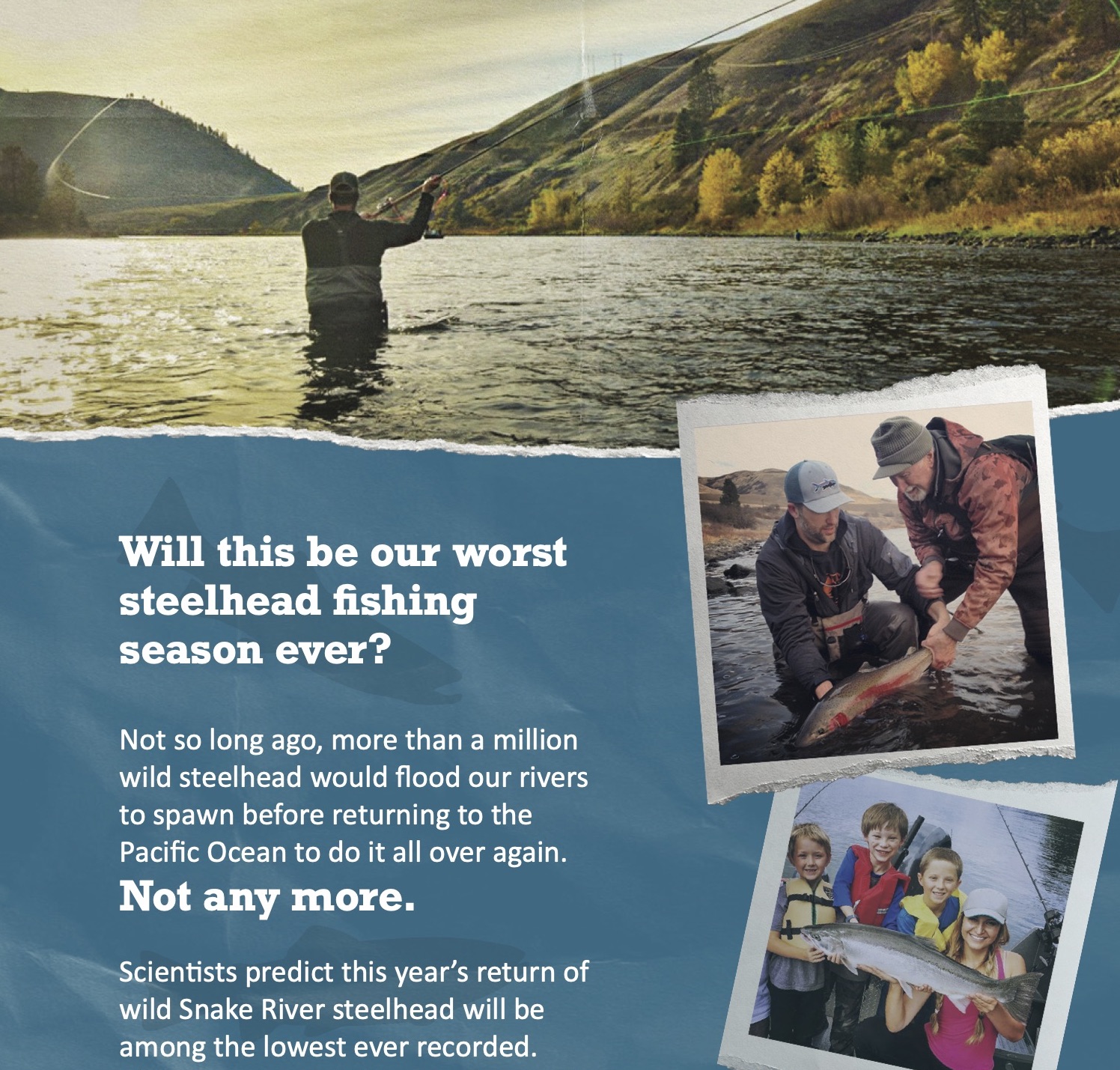 ACT NOW: Help seize a once-in-a-lifetime opportunity to protect steelhead from extinction, keep people fishing, and invest in our Northwest communities and economy!

Not long ago, more than a million wild steelhead would flood into the Snake and Columbia rivers to spawn before returning to the Pacific Ocean to do it all over again. 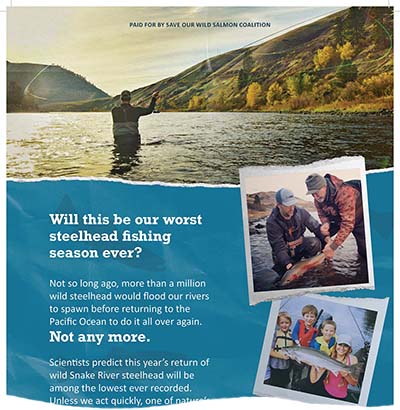 Scientists are predicting this year’s return of wild Snake River steelhead will be among the lowest ever recorded. Unless we act quickly, one of nature’s recurring miracles in the Northwest will fade away for ever.

As a result of these devastating returns, fishing seasons are being curtailed and closed across the Snake and Columbia River Basin. Hundreds of businesses in scores of communities are paying the price.

Time is running out and we need urgent action - before steelhead, our livelihoods and our traditions go extinct forever.

Fortunately, earlier this year, Idaho Congressman Mike Simpson proposed a plan to invest big in the Northwest — to protect, restore and reconnect endangered fish populations and their habitats and to support agriculture, transportation, clean energy, and new, local jobs at the same time.

His groundbreaking proposal has launched a conversation about collaborative, regional solutions to restore the lower Snake River and its fish and invest billions of dollars into jobs, communities and infrastructure.

To seize this opportunity, we now need other public officials in the Northwest to step up as well.

Call and write your U.S. senators - in Washington State, Oregon and Idaho. Tell them we need bold, urgent leadership to protect Snake and Columbia river steelhead and salmon populations from extinction - and the businesses, communities and ways of life they support.

CONTACT YOUR SENATORS IN WASHINGTON, OREGON AND IDAHO: "Time is running out. Now is the time to act!”

Follow this link to send a pre-written, editable letter to our senators in  Washington State, Oregon and Idaho.

SEND AN EMAIL TO YOUR SENATORS (in WA, OR, ID)

You can also pick up the phone and call your senators –  let them know that we need their urgent leadership protect Snake and Columbia River steelhead from extinction, invest in our communities and economy, and preserve our region's special way of life.

FURTHER INFORMATION: Follow these links to additional information about Columbia and Snake River steelhead returns and its impact on anglers, businesses and communities across the Northwest.

E&E News: A Republican wants to breach dams. Where are Democrats? (March 23)

Oregon Public Broadcasting: Northwest Salmon And Steelhead In Peril, And Efforts To Save Them Scale Up In Idaho (Jan. 23, 2020)

Visit these websites of allied business and non-profit organizations to learn about what they do, how you can support them - and how to get more involved. 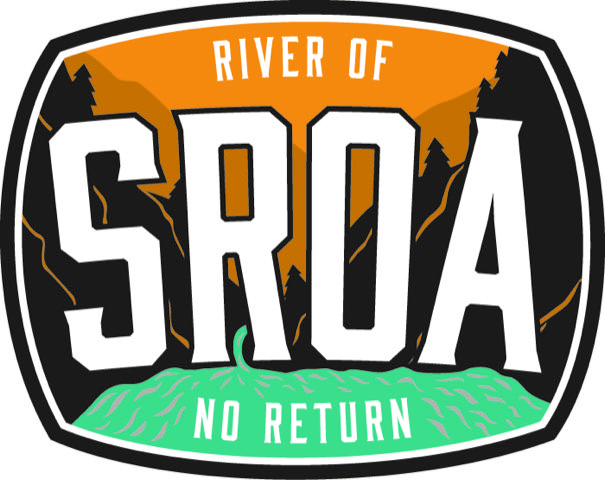 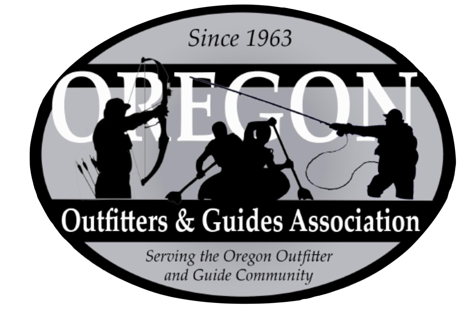 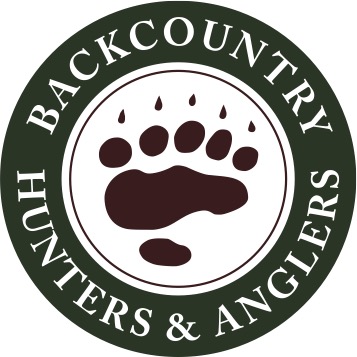 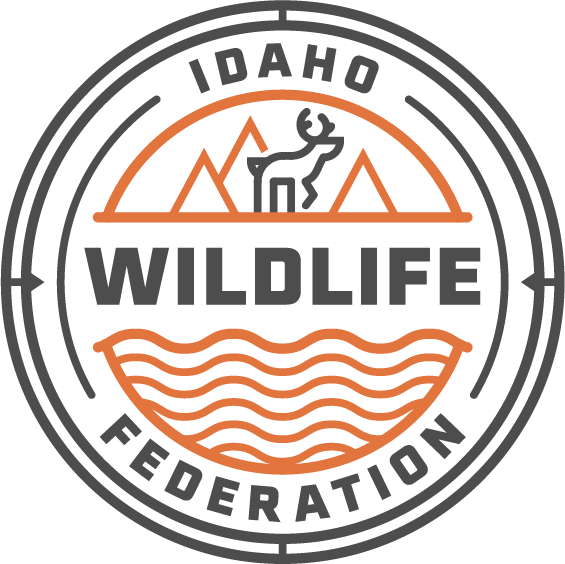 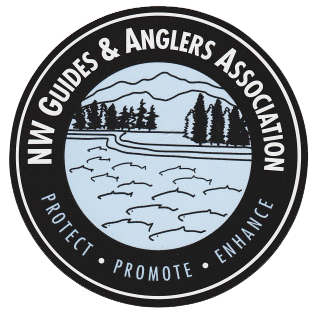 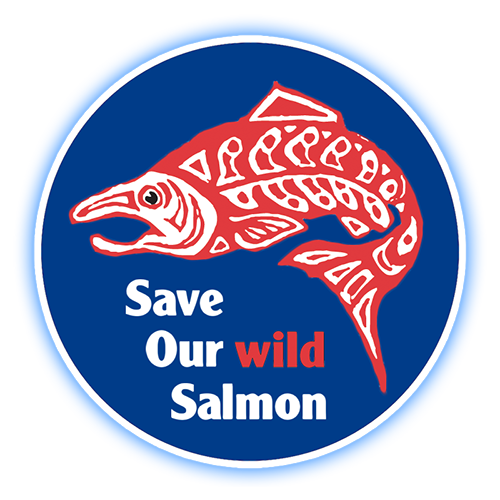 Idaho Statesman: Acidic oceans and warm rivers that kill Idaho’s salmon might be norm in 50 years

STANLEY, ID. What is the future of the Columbia River and its salmon? Look to 2015.

That year’s extraordinary combination of overheated river water and low flows killed hundreds of thousands of returning sockeye salmon, devastating a run that had rebounded from near-extinction.

Millions of new sockeye and steelhead smolts migrating the opposite way, to the Pacific, died throughout the river system; only 157 endangered sockeye made it back to the Sawtooth Valley this year.

By the middle of this century, scientists suggest, the temperatures we saw in 2015 will be the norm. The low snowpack and streamflows were examples of what the Pacific Northwest should expect at the end of this century due to rapid climate change caused by the burning of fossil fuels, climatologists say.

“2015 will look like an average year in the (2070s) and there will be extremely warmer years than that,” said Nate Mantua, a NOAA atmospheric scientist in Santa Cruz, Calif.

Scientists, politicians and energy officials have argued for decades over the best way to restore troubled salmon runs along the Columbia and Snake. Their focus has largely been on the dams and human development that reshaped the rivers. But regardless of what other steps we take for the fish, climate change could catch up with them in the coming decades and pose a major threat.

Already, scientists have seen regional snowmelt reach rivers an average of two weeks earlier than historical records indicate. The average temperature of the Columbia River and its tributaries has risen more than 1 degree Fahrenheit since 1960.

Climate modelers at the University of Washington’s Climate Impacts Group predict  <https://cig.uw.edu/resources/special-reports/> that the Pacific Northwest’s average annual temperatures will rise a total of 4 to 6 degrees Fahrenheit by 2050. High estimates suggest the increase could exceed 8 degrees, said Joe Casola, the group’s deputy director.

Salmon and steelhead that migrate in the summer and those that spawn and rear in lower-elevation tributaries to the Columbia may not survive these temperatures. In water of just 68 degrees, salmon will begin to die.

About the Restoring the Lower Snake River Project

Save Our wild Salmon is leading a coalition of conservation, fishing, clean energy, orca and river advocates to protect and restore abundant, self-sustaining populations of wild salmon and steelhead in the Columbia-Snake River Basin for the benefit of people and ecosystems. Our coordinated legal, policy, communications and organizing activities focus on holding the federal government accountable by requiring Northwest dam agencies (Bonneville Power Administration, Army Corps of Engineer) and NOAA to craft and implement a legally valid, science-based Salmon Plan (or Biological Opinion/”BiOp”) for the Columbia-Snake Basin.

Since 1998, SOS has led a dynamic campaign to restore a natural, freely-flowing lower Snake River in southeast Washington State, expand spill on the federal dams that remain, and other necessary measures, based on the law and best available science.

The removal the four lower Snake dams must be a cornerstone of any lawful salmon restoration strategy in the Columbia Basin. Lower Snake River dam removal will restore 140-mile river and 14,000+ acres of riparian habitat and bottomlands. It will cut dam-caused salmon mortality by at least 50% and restore productive access for wild salmon and steelhead to 5,500+ miles of contiguous, pristine, protected upriver habitat in northweast Oregon, central Idaho and southeast Washington State. Much of this immense spawning/rearing habitat found above the lower Snake River is high elevation and thus provides a much-needed coldwater refuge as a critical buffer against a warming climate. Restoring a freely-flowing lower Snake River will deliver tremendous economic, ecological and cultural benefits to the tribal and non-tribal people of the Northwest and the nation.

Climate change increases the urgency to remove these four dams and restore this river. High harmful water temperatures in the lower Snake River’s four reservoirs are now routine. Their frequency, duration and intensity have been steadily growing in the last several decades – with increasingly devastating impacts on out-migrating juvenile fish and adults returning from the Pacific Ocean to spawn. In 2015, for example, just 1% of 4000 adult Snake River sockeye that entered the Columbia’s mouth reached their Idaho spawning gravels; others perished in warm reservoir waters impounded by federal dams on the lower Snake and lower Columbia Rivers. A restored lower Snake will dramatically lower water temperatures and again offer diverse habitats found in living rivers, including additional coldwater refugia currently lost as a result of these reservoirs today.

Increased spill at all federal dams is needed today as an immediate, interim measure to buy time for these endangered populations until a more effective and a lawful strategy is in place. Spill – water releases during the juvenile salmon out-migration to the ocean in the spring and summer - increases juvenile survival by reducing migration time, exposure to warm waters, predation and the overall numbers of barged (artificially transported) fish. Increased juvenile survival boosts adult returns in subsequent years – benefiting marine/terrestrial/freshwater wildlife and coastal/inland fishing communities.

These policies will substantially increase fish populations with corresponding impacts on the 125+ species that benefit from salmon. They will increase resilience for wild salmon and steelhead, the ecosystems they inhabit, and human communities they impact. And they will deliver critical economic, recreational and cultural benefits to the communities of the Northwest and the nation.

Our coalition recognizes that the removal of the four federal dams on the lower Snake River will affect the communities that currently use them – especially the communities of Lewiston (ID) and Clarkston (WA) and the energy, commercial and irrigation sectors. Based on the significant data on these dams, their modest services and the availability of efficient, cost-effective alternatives, salmon advocates are ready to sit down with both sovereigns and stakeholders to craft a responsible plan that removes these costly dams and replaces their services with alternatives.

The problem and the solution in five bullets:

A lawful federal salmon plan must restore a freely flowing lower Snake River by removing its four costly dams and increase water releases or ‘spill’ over the dams that remain.

In 2016, a federal judge rejected the federal dam agencies’ latest plan for protecting Columbia-Snake River salmon. This is the fifth plan rejected now by three judges over two decades. Our government has spent $15B+ but has yet to recover a single population. It’s past time for a new approach. A lawful, science-based plan must include the removal of the four costly federal dams on the lower Snake River. We need a Northwest plan that works for the region’s ecology and its economy, for fishermen and farmers, for taxpayers and energy bill payers.