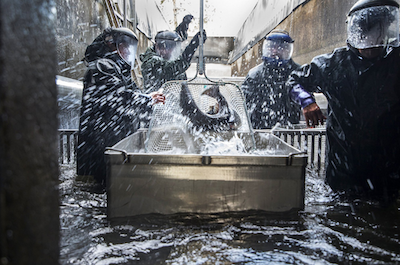 For nearly three decades, the region has been stuck in unending litigation and spiraling costs as salmon in the Columbia and Snake rivers decline toward extinction. But in a sweeping $34 billion proposal from an unlikely source, at an auspicious moment, comes a chance for a fresh start.

Could Congressman Mike Simpson, a Republican from a conservative district in eastern Idaho, have launched a concept that will forever alter life on the Columbia and Snake — and finally honor tribal treaty fishing rights in the Columbia Basin?

His proposal includes removing the earthen berms adjacent to all four Lower Snake River hydroelectric dams to let the river run free, to help save salmon from extinction, while spending billions of dollars to replace the benefits of the dams for agriculture, energy and transportation.

Such a colossal proposal coming from a relatively unknown Republican is a shocker and the delegation is already giving it a look.

All four Democratic senators from Washington and Oregon issued a joint release Friday evening stating: “All communities in the Columbia River Basin and beyond should be heard in efforts to recover the Northwest’s iconic salmon runs while ensuring economic vitality of the region. Any process needs to balance the needs of communities in the Columbia River Basin, be transparent, be driven by stakeholders and follow the science.”

Rep. Cathy McMorris Rodgers, R-Spokane, put out a statement in staunch opposition. “These dams are the beating heart of Eastern Washington,” she said in a press release. “Spending $33 billion to breach them — with no guarantee that doing so will restore salmon populations — is a drastic, fiscally irresponsible leap to take.” Washington’s three GOP House members also joined with a representative from Idaho on a proposed resolution supporting existing hydropower dams, and seeking expansion of hydropower in the region.

But Simpson has captured the ear of others who normally would pile on. Instead, they are listening, with caveats and caution, to be sure.

Simpson is careful to point out that what he has released is an overall concept that provides only broad spending targets for key initiatives. What he wants is a regional conversation about a new vision for the Northwest. What if we stopped debating whether the Lower Snake River dams are valuable, and recognize that they are, then figure out together how to replace those benefits?