Here's an update on (1) recent progress on Governor Inslee’s Southern Resident Orca Task Force, and (2) to share some media and public actions by SOS and friends, and (3) keep you posted on what’s ahead.

First, THANKS to all of you that submitted comments recently on the latest set of Task Force recommendations. The extremely short public comment period generated thousands of comments and demonstrated overwhelming support for urgent action to protect and restore the healthy rivers and habitats that orca and salmon rely upon. The three actions that received the most public support:
(1) Restore a freely-flowing lower Snake River (Rec. 9 - 91% strong support)
(2) Increase ‘spill’ at federal dams (Rec. 8 - 90% strong support), and
(3) Protect and restore freshwater, estuary and marine habitat across the region (Recs. 1-4 - 72% strong support).

These recommendations are also top SOS' priorities! Unambiguous public support like this is critical to advance our work on the ground at the Task Force and in other venues. Thank you for taking action and speaking out!

ACT NOW: Call the Governor - Speak Up for Orca and Salmon

You helped send a clear message to the Task Force, Governor Inslee and other policymakers in the Northwest that there's public demand for bold, urgent action. Importantly, the science also strongly supports these three priority actions to help endangered salmon and orca. It’s a perfect match and one we'll highlight as we move forward.

Second, the Orca Task Force’s final public meeting took place on Nov. 6. The Task Force's goal for the meeting was to finalize any outstanding recommendations and approve them. That is exactly what happened - and here is a quick report:

SOS’ top two recommendations – (1) increased spill at Columbia-Snake dams and (2) the establishment of a lower Snake River dam removal planning forum – were both discussed and debated. Some Task Force members challenged these recommendations and their language, but many supported and advocated for them.

Eventually, Task Force members settled on final language and added them with the other recommendations. By late afternoon, the Task Force had finalized and approved 36 recommendations. They are now scheduled for delivery to Governor Inslee in Olympia on Friday, Nov. 16. (we don’t have the final set of recommendations to share at this time; we have to wait until 11.16)

Third, here are several thoughts on the Task Force and its recommendations at this important juncture:

Fourth, take a look at some recent press coverage: 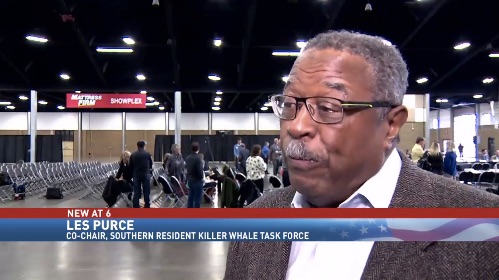 (i) Seattle Times has published the first installment in a special series, Orca in Peril, by environment reporter Lynda Mapes:
Hostile Waters: Orca thrive in a land to the north. Why are Puget Sound’s dying?

Fifth, follow the links below to several public actions organized this weekend that help maintian the drumbeat on behalf of endangered orca and the chinook salmon populations they depend upon. Huge thanks to our friends at the Backbone Campaign for their partnership on behalf of orca, salmon and our communities.

Human Orca Mural in Bellingham - Save Our wild Salmon and the Backbone Campaign (Saturday, Nov. 10)