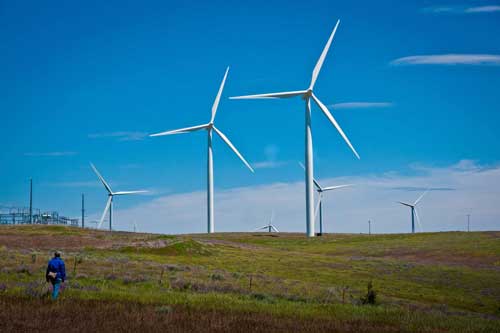 You’ve likely noticed an increase in posts on our website and blog about wind energy, the Bonneville Power Administration (BPA), the Federal Energy Regulatory Commission (FERC), and strange, Orwellian phrases like “oversupply management” and “power over-generation.” And you might be asking: what does this have to do with saving wild salmon? Turns out: A LOT. Our efforts at restoring the lower Snake River for threatened salmon and steelhead populations, and improving salmon passage at Columbia River dams, have a lot of overlap with Northwest electricity, since the largest killer of fish is our hydroelectric dams. And it’s why our Coalition is proud to work alongside groups like the NW Energy Coalition, that are leading the development of renewable energy and energy efficiency.

The truth is that saving salmon and developing innovative renewable power sources like wind, solar, and energy efficiency provide an opportunity to achieve mutually beneficial goals. More power generated by renewables means less power needed from the hydrosystem, which in turn means restored fish, more jobs, and cleaner energy for the Northwest. But the current policies of the Bonneville Power Administration run counter to this opportunity, and counter to important priorities of the Obama administration. Too much hydropower? We’re lucky in the Northwest to have abundant renewable power sources. In fact, last year we had so much snow that our rivers filled and huge amounts of water pushed through the 200+ hydroelectric dams of the Columbia and Snake River basins. We actually had TOO MUCH hydropower in the spring last year (this will likely be the case into the near future). So BPA regularly turned off wind farms’ access to the transmission grid over a 2-month period, depriving them of millions of dollars in revenue. BPA framed this issue in the media as an oversupply problem – “too much wind” which the agency simply couldn’t keep up with. But the base problem was too much hydro, a predictable situation BPA had several years to plan for that it did not take good advantage of. BPA blames fish. BPA’s justification for cutting off wind energy last year was that it was "necessary" to protect endangered salmon. This is false. Salmon have higher survival when the river runs like a river; not surprisingly, their odds of surviving their downstream journey increase if they’re washed over the tops of dams rather than sucked through power turbines or physically collected and trucked or barged downstream. It’s true that too much water spilling over the tops of dams can create harmful gas levels in the water, but the science has long been clear that salmon largely benefit from additional spill. Indeed, our analysis showed that even the high levels of gas last spring and summer were a minor issue for migrating salmon. That’s why SOS’s fishing and conservation groups are urging BPA to adopt policies that increase spill, thus helping both salmon and the wind industry. (read the full breakdown) National media takes note - Congress begins to weigh in. BPA’s decision to cut off wind and blame salmon has received national media attention. Recently, New York Times – Green Blog reporter Matthew Wald published an update on the issue. Wald’s article highlights the disconnect between BPA’s proposals and the Obama administration’s clean energy priorities. The U.S. Department of Energy’s goal is to produce 20% of America’s electricity from wind power by 2030. BPA’s policy needlessly discourages wind industry growth essential to achieving that goal. Members of Congress have also taken note. In early 2011, before BPA initiated their wind cut-off policy, Senator Jeff Merkley (D-OR) and Congressman Earl Blumenauer (D-OR) sent a letter to BPA expressing concern over the policy and urging the agency to delay formal adoption and allow for alternative approaches. Then in May of 2011, Congressman Ed Markey (D-MA) sent a letter to Energy Secretary Steven Chu. "I strongly encourage DOE [Department of Energy] to work with BPA to consider all potential alternatives," Markey wrote in the letter. "I ask that BPA pursue options that may be available to avoid a situation that could severely limit current wind production and future development in the Pacific Northwest as well as set a negative precedent nationally for addressing future renewable energy integration challenges," Markey continued. Markey’s comments make clear that BPA’s policies are deserving of this national attention and oversight. Opportunity, not “Problem” As mentioned, this issue isn’t going away. Odds are good we’ll again have too much power this spring. But the situation offers an opportunity – not a problem – for our regional and national leaders to take actions this year, and in the next 5-10 years, that benefit fish, clean energy, jobs, and ratepayers. We will continue to fight for better BPA policies that seize this opportunity, starting this spring. Here’s a timeline of the last year to help illustrate what’s happened so far: Winter 2010-11: Heavy snows pack our mountains. Spring 2011: Snow pack begins melting, increasing water levels in NW rivers to very high levels. February 18, 2011: BPA issues “Draft Record of Decision on Environmental Redispatch and Negative Pricing Policy,” the oddly-named proposal to shut down wind power in high water conditions. May 12, 2011:Op-Ed by SOS executive director Pat Ford runs in the Seattle Times. May 13, 2011: BPA issues final Record of Decision, thereby implementing the so-called “Environmental Redispatch” policy. May 18, 2011: First wind farms curtailed as a result of the policy. June 11, 2011: Wind industry members file official complaint with FERC against BPA. July 10, 2011: Last of the curtailments of wind occur and wind farms resume normal operation. July 18, 2011: SOS intervenes in the complaint to FERC on the side of salmon . September 21, 2011: SOS releases report on the impact of dissolved gas on salmon following the curtailment policy and finds NO BIOLOGICAL BASIS for the policy. December 7, 2011: FERC rules in favor of the wind industry and salmon. February 7, 2012: BPA publicly presents a new draft protocol for 2012 in response to the ruling from FERC. February 7 - February 21, 2012: Nearly 90 groups submit comments on BPA’s draft protocol, nearly all in opposition. March 6, 2012: BPA formally submits its protocol to FERC, ignoring the vast majority of the comments submitted. March 27, 2012: SOS files an official protest and comments with FERC, again citing the lack of biological basis for BPA’s curtailment policy, and instead proposing practical solutions that benefit both salmon and clean energy.