Take Action on this issue. 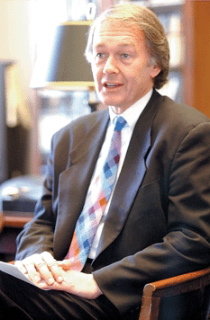 In recent months, BPA has claimed that legal constraints for salmon may force it to shut off wind energy production in the Northwest when there’s too much water in the rivers (a so-called “over-generation” situation). BPA has therefore proposed a “Record of Decision on Environmental Redispatch,” which outlines its approach for dealing with the issue. This plan, which BPA will likely implement very soon as spring runoff increases river flows, will undermine renewable energy in the Northwest, threaten salmon, and contradict the policies of the Obama administration and the Department of Energy.

In his letter, Rep. Markey writes that he is aware that changes in power systems will present new challenges to energy managers. However, he asks that BPA utilize resources such as the Department of Energy to create sound policies, instead of shutting off wind. Sen. Jeff Merkley (D-Ore.) and Rep. Earl Blumenauer (D-Ore.), as well as Rep. Jay Inslee (D-WA), also sent letters to BPA recently, asking it to reconsider its Record of Decision and expressing their concern that it would “cause significant problems for renewable energy development in our region.”

While over-generation situations do occur, the salmon aren’t forcing BPA to order reduced spill; BPA is largely making that decision on its own. Currently, BPA follows Washington State’s dissolved gas standard (water spilled over the dams increases the amount of dissolved gas in the river, moderate levels of which salmon can readily handle), which allows a dissolved gas level of 115%. If Washington adopted or federal agencies implemented Oregon’s standard, maximum dissolved gas levels would increase to 120%. This shift could allow more spill and significantly lessen the need to curtail wind energy. It also would be better for salmon - in fact, more protective – by easing their migration past these dams. See our previous blog post on this issue

Rep. Markey presented four additional alternatives to address these high-runoff scenarios in his letter last week: displacing thermal electricity generation in the West; managing the transmission grid more effectively and efficiently; creating better weather forecasting techniques to be able to predict when these situations may occur; and evaluating options for exporting excess power to other regions. Of course, in our opinion the best option (which didn’t come up in Rep. Markey‘s letter) would be to remove the four dams on the lower Snake River. By removing these dams, salmon would be reconnected to the best habitat left in the continental United States, BPA’s alleged “salmon constraints” would largely be lifted, and salmon would thrive. Many scientists and economists agree that removing the four lower Snake River dams is the best, most cost-effective, and perhaps only option to protect and rebuild endangered Snake River salmon populations.

Salmon are amazing animals that travel thousands of miles in their migration from mountain streams to the Pacific Ocean and back again. They play a key role in the culture, economy, and ecology of the Pacific Northwest – feeding us, our ancient forests, and more than 150 additional animal species. Save Our Wild Salmon thanks Senator Merkley and Representatives Markey, Blumenauer, and Inslee for their leadership on both salmon protection and clean energy development – two things that we think go hand in hand here in the Northwest. We are grateful for their efforts to draw more attention to this issue and hope that their words encourage Secretary Chu and others to re-examine BPA’s proposed plan. This issue is expected to come to a head in the coming days, as warming spring temperatures will lead to increased water levels at the dams.

Let’s hope BPA decides to listen to the leadership of the Northwest on this issue.