During the summer, this weekly report will provide an update on real-time water temperatures in the lower Snake and Columbia River reservoirs via graphs and analyses, a summary on the highest weekly water temperatures at the forebay/reservoir of each dam, and the status of adult returns for different salmon and steelhead populations as they make their way back to their natal spawning grounds. We’ll hear first-hand from scientists, Tribal members, fishing guides, advocates, and other experts about the challenges facing the Columbia and Snake rivers - and our opportunities to improve and restore them - in order to recover healthy, resilient fish populations and the benefits they deliver to the Northwest’s culture, economy, and ecology.

Today, these harmful hot water episodes above 68°F in the Columbia and Snake Rivers are increasing in duration, frequency, and intensity. Our changing climate is making a bad situation for the Northwest’s iconic fish worse. Our region and nation must take urgent action to re-establish cool water temperatures - or we will lose these species forever. Restoring a freely flowing lower Snake River by removing its four federal dams is likely our only option to address high water temperatures in this 140-mile stretch of river running through southeast Washington State. Restoring the Snake River is one essential element of what must be a larger regional strategy to protect and rebuild healthy, abundant salmon and steelhead populations in order to benefit other fish and wildlife populations, including critically endangered Southern Resident orcas, to uphold our nation’s promises to Native American tribes, and to ensure prosperous communities across the Northwest.

Introduction: The daily mean temperature at the four reservoir forebays (immediately upstream from the dam) in the lower Snake River (above) and the lower Columbia River (below) for 2022 is represented with solid lines and their 10-year average (2012 - 2022) temperatures with dashed lines of the same color. The dotted line across the graph represents the 68°F “harm threshold” for adult and juvenile fish. Salmon and steelhead begin to suffer harmful effects when water temperatures exceed 68° Fahrenheit. The longer temperatures remain above 68°F and the higher the temperatures rise above 68°F, the more severe the potential effects, including: increased metabolism, increased susceptibility to disease, reduced fecundity or reproductive potential, and/or death (see Issue 1 for more detailed information).

On the lower Columbia River, the reservoirs behind the Bonneville Dam registered the highest temperature at 67.1°F.

In 2015, high water temperatures driven by hot weather and a low snowpack killed more than 250,000 salmon in the Columbia and Snake rivers. This incident of mass mortality inspired SOS member organization Columbia Riverkeeper to produce a report—Columbia Riverkeeper White Paper: Computer modeling shows that Lower Snake River dams caused dangerously hot water for salmon in 2015—evaluating what the water temperatures of the lower Snake would have been during the summer of 2015 if its four federal dams did not exist. 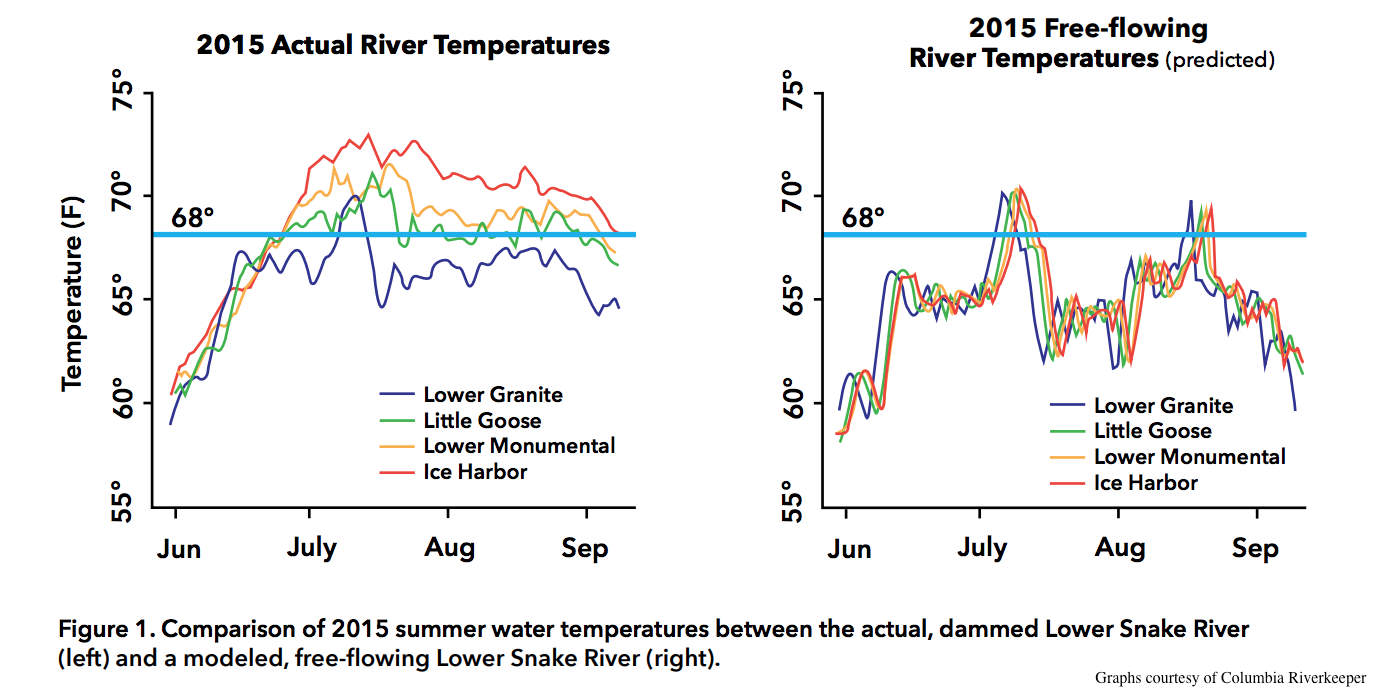 Using a U.S. Environmental Protection Agency (EPA) water temperature model, Columbia Riverkeeper found that each of the four reservoirs behind the dams increased the river temperature by about 2°F. The reservoirs create large, stagnant pools that steadily absorb heat from the sun. When warm water from one reservoir moves downstream to the next pool, the already-warmed water is stopped again by the next dam and continues to heat up. The model indicates clearly that this effect would be absent from the free-flowing lower Snake River.

Since Columbia Riverkeeper published its study in 2017, federal science agencies have released more information corroborating its findings. First, the U.S. Army Corps of Engineers used EPA’s model, as well as another water temperature model, to recreate Columbia Riverkeeper’s study—and got similar results.1 Second, the EPA released a study showing that, in warm years, water flowing into the lower Snake River is cool enough for fish, but water flowing out of the lower Snake River is too hot, and the dams cause much of this heat pollution.2

A free-flowing lower Snake River would not absorb the same amount of solar radiation. Considerably cooler waters deliver big benefits to migrating juvenile and adult salmon and steelhead populations—leading to increased survival and reproductive success. A free-flowing lower Snake River would also extend the benefit of cold water released from Dworshak reservoir upstream on the Clearwater River in the hot summer months. 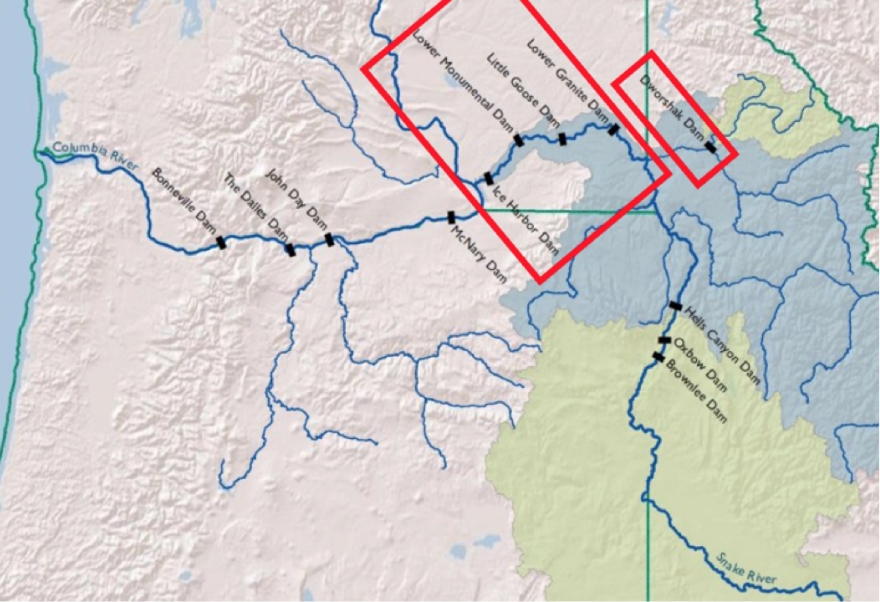 Dworshak Dam’s large reservoir is used today to deliver cold water into the Clearwater River, just upstream from its confluence with the Snake River at Lewiston, Idaho. As long as these four dams remain in place, however, the benefits of Dworshak’s cold flows into the lower Snake River are highly limited and serve only as a local, short-term solution to cooling water temperatures to the Lower Granite Dam’s reservoir.

By restoring this 140-mile stretch of the lower Snake River through dam removal, EPA models used in Columbia Riverkeeper’s report show that, while temperatures in a freely flowing river may spike above 68 degrees periodically, they will quickly return to the cool temperatures that salmon and steelhead need to survive and migrate. With a restored LSR, cold summer flows from behind Dworshak Dam would further help keep temperatures healthy for fish from Lewiston (ID) all the way downstream to where the Snake River joins the Columbia River in south-central Washington State near the Tri-Cities.

In summarizing findings of the study, Miles Johnson, senior attorney at Columbia Riverkeeper, notes that "removing the four lower Snake River dams would keep the river cooler and help salmon reach their spawning areas. This is critical for healthy salmon and a healthy river—especially as the changing climate tightens its grip on our waters in the Northwest. It's time for bold action to protect the Northwest's fishing traditions, orcas, and salmon. It’s time to restore the lower Snake River."

The federal government’s latest Columbia-Snake salmon plan—developed during the Trump Administration by Bonneville Power Administration, and Army Corps of Engineers—fails to contain any effective strategy to maintain cool, salmon-friendly water temperatures in these reservoirs during the summer months. The Trump Plan has been challenged in court by the Nez Perce Tribe, the state of Oregon, and more than a dozen conservation and fishing organizations (and members of the Save Our wild Salmon Coalition). Notably, this litigation was paused last October to allow the parties time to negotiate a solution to restore the fish and end the litigation. This pause will expire on July 31st, unless the parties agree to an extension, subject to court approval.

Big news broke last week when the Biden Administration announced two new reports to help inform the restoration of Columbia River Basin salmon and long-term energy planning in the Pacific Northwest. 'Rebuilding Interior Columbia Basin Salmon and Steelhead' from NOAA confirms the actions needed to restore salmon and steelhead in the Columbia Basin, including lower Snake River dam removal. In the press release announcing these reports, CEQ Chair, Brenda Mallory said, “Business as usual will not restore the health and abundance of Pacific Northwest salmon. We need a durable, inclusive, and regionally-crafted long-term strategy for the management of the Columbia River Basin." The second report from USDOE and BPA focuses on energy replacement. This analysis confirms what several other studies show: we can develop a portfolio of clean energy resources to feasibly and affordably replace the dams’ energy services. Studies and analyses continue to accumulate and reinforce each other re: the urgency and opportunity to restore salmon and steelhead in the Columbia Basin - including the removal of the lower Snake River dams and launching a comprehensive energy replacement planning process.

Finally, for a clear, compelling summary of how hot water harms and kills salmon and steelhead, view this 2-minute video produced by National Wildlife Federation Outdoors.