The Biden administration released two reports finding dam removal is needed on the Lower Snake to recover salmon to fishable levels in the Columbia and Snake rivers and that replacing the energy produced by the Lower Snake River dams is feasible.

The reports were made public at 6 a.m. Tuesday and are sure to turn up the volume on the dam removal debate roiling the region. The release by the Council on Environmental Quality on behalf of four agencies inserts the Biden administration more prominently into what has been a largely regional issue.

The administration also weighed in on the dam removal debate last March in a blog post signed by multiple top agency officials that — while not taking a position on dam removal — took note of the call by Native tribes for dam removal and of the loss of salmon in the rivers.

The draft report by scientists at the National Oceanic and Atmospheric Administration found sweeping changes are needed to restore salmon to fishable levels, from removal of one to four dams on the Lower Snake to reintroduction of salmon to areas entirely blocked by dams.

“Business as usual will not restore the health and abundance of Pacific Northwest salmon. We need a durable, inclusive and regionally crafted long-term strategy for the management of the Columbia River Basin,” said CEQ Chair Brenda Mallory, who is coordinating a federal interagency effort, launched in October 2021, to develop information and analyses in support of federal and regional decision-making in the Columbia River System.

“These two reports add to the picture — that we are working alongside regional leaders to develop — of what it will take over the decades ahead to restore salmon populations, honor our commitments to Tribal Nations, deliver clean power and meet the many needs of stakeholders across the region.”

The report relied in part on science from the Nez Perce Tribe and state of Oregon, in addition to federal research.

Today 13 runs of salmon and steelhead are at risk of extinction in the Columbia and Snake and runs have declined to a fraction of historic abundances. Salmon in the Snake Basin are particularly hard-hit with only about 50 fish coming back to some drainages in an area that used to produce half the Chinook salmon in the Columbia Basin. 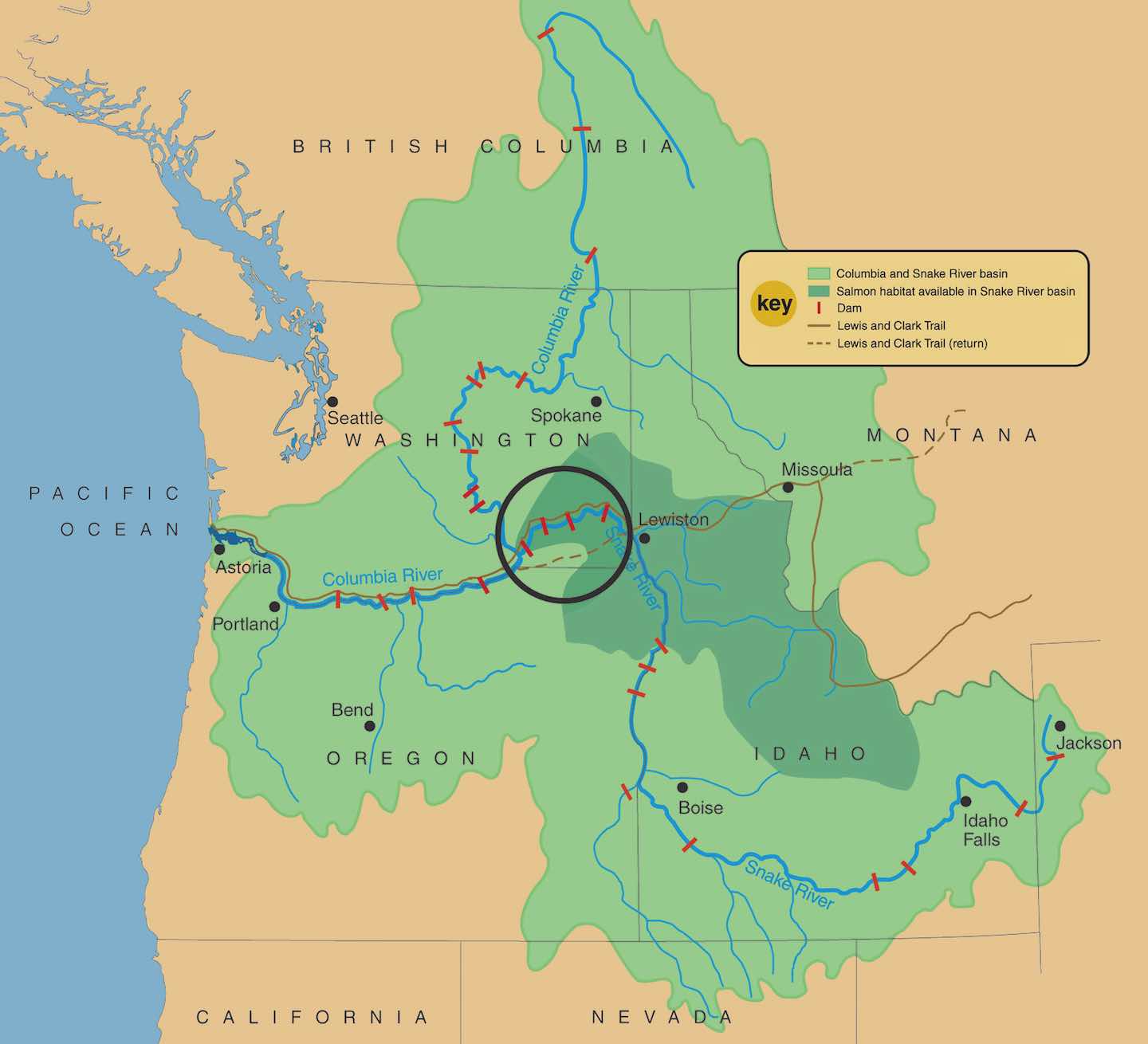 The region has spent billions of dollars on salmon and steelhead recovery but the fish continue to decline. It is time for a big step outside the status quo, according to the report. Dam breaching has long been opposed by grain shippers, irrigators, power producers and other industrial river users.

But recovery is not resulting from multiple efforts over decades, including habitat restoration, massive hatchery releases and passage fixes at the dams. “We need to go to larger-scale actions,” NOAA scientist Chris Jordan said in a briefing on the report Monday.

“We are at a crucial moment for salmon and steelhead in the Columbia River Basin when we’re seeing the impacts of climate change on top of other stressors, and this draft report delivers our scientific assessment of what we must do to make progress towards rebuilding the ‘healthy and harvestable’ fish populations in the Columbia Basin…,” said Janet Coit, assistant administrator for NOAA Fisheries.

The report on replacement power put an $11 billion to $19 billion price tag on the cost of replacing power from the dams, depending on the method and the time frame, cost estimates that are within the range of other similar reports.

The administration has not endorsed the actions in the reports, but it is “carefully considering this information and ongoing regional efforts as it assesses long-term pathways for the Columbia River Basin,” the news release on the reports stated.
Some heralded the reports.

“The information that is being developed confirms much of what we have been saying for a long time,” said Joseph Bogaard, executive director of the Save Our Wild Salmon Coalition. “The dams are replaceable. We need a political solution. Salmon are in deep trouble and we need to move quickly.”

Kurt Miller, executive director of Northwest RiverPartners, which represents utilities, shippers and other industrial river users, was skeptical of the findings. With Chinook salmon in decline throughout the West Coast region — including on some undammed rivers — he disagreed dams were the main issue in recovery. Reducing the amount of hydropower generation also could lead to greater reliance on fossil fuel and stoke global warming that is a grave risk to salmon, Miller said.

After more than two decades of court battles and debates over the Lower Snake River dams, the reports add to momentum for removal, Bogaard said, even though the Biden administration has yet to take a position.

“The conversation has significantly advanced, accelerated and diversified,” Bogaard said.

GOP Congressman Mike Simpson of Idaho kicked the dam removal bees’ nest in 2021, by putting a $34 billion price on removal and replacement of the dams’ services in order to save salmon. Now U.S. Sen. Patty Murray, a Democrat, and Washington Gov. Jay Inslee also are taking stock of comments on another report on dam removal, with their recommendation expected later this summer.

The reports come as tribes and their allies are heading to Washington, D.C., to advocate for dam removal on the Lower Snake to boost recovery of salmon and endangered southern resident orcas, which rely on salmon for their diet.

So do tribes, who are suffering ill health because of the loss of their traditional foods, including salmon, said Andrew Joseph Jr., chair of the Confederated Tribes of the Colville Reservation, where salmon passage is blocked by the Chief Joseph and Grand Coulee dams.
“Our bodies were made for eating that salmon,” Joseph said. “For thousands of years, it was 80% of our diet. Now our immune system is weaker, and we have the worst health disparities.”

His family today has to travel two hours each way to try to catch salmon below Chief Joseph Dam.

The Nez Perce Tribe has long been at the forefront of the push for dam removal on the Lower Snake. Tribal Vice Chair Shannon Wheeler called the reports “definitely encouraging.”

“This administration is taking the climate crisis and the salmon extinction crisis seriously,” Wheeler said.

The science report will be circulated to state and fish managers for review over the next 30 days. The report on replacement power will be considered at a public meeting of the Northwest Power and Conservation Council at 3:30 p.m. Tuesday that can be watched online.