On the lower Columbia River, all reservoirs peaked over 68°F. The reservoirs behind the John Day Dam and The Dalles dam registered the highest temperature: 71.96°F.

Wild salmon and steelhead are long-migrating fish that spend significant parts of their lives in freshwater and in saltwater ecosystems. The condition of each - saltwater and freshwater - affects fish survival. However, there’s a misleading narrative advanced by defenders of the status quo that ocean conditions, rather than the four lower Snake dams, are the real obstacle to recovering healthy, abundant populations of Snake River salmon and steelhead. This is false - Northwest salmon and steelhead all swim in the same ocean, but the mortality rates they experience in freshwater increase significantly with the number of dams and reservoirs they encounter. Specifically, endangered Snake River salmon and steelhead have to cross eight dams and reservoirs to reach the ocean and then again as they return to their spawning grounds. And these fish suffer from the highest mortality rates, and lowest smolt-to-adult return ratios, compared to other fish that spawn lower in the watershed and encounter fewer dams and reservoirs.

Salmon and their ecosystems:

Ocean conditions do play a significant role affecting salmon and steelhead survival. When ocean conditions are good (abundant food availability for salmon and steelhead to eat), salmonid survival in the ocean increases, and we see increased survival of juvenile fish as they enter the ocean and increased adult salmon returns back into the Columbia-Snake Basin. When ocean conditions decline (reduced food availability), we often see adult returns (survival) decline too. The ocean has a long-running and well-documented cyclic pattern of good conditions followed by bad conditions.

It should surprise no one that the condition of freshwater ecosystems also significantly affect salmon and steelhead survival and reproduction. In the Columbia-Snake Basin, the construction of the federal hydro system - the dams and their reservoirs - has profoundly degraded available fish habitat and also profoundly reduced access to historic habitat. The federal hydro system in the Columbia Basin is far and away the largest single source of human-caused mortality for salmon and steelhead. Dams and reservoirs destroy spawning and rearing habitat; they warm waters, slow currents, increase energy expenditures by young migrating fish, significantly increase predation by invasive and other fish that thrive in these stagnant warm-water reservoirs. The more dams and reservoirs that these fish encounter in their life, the greater their mortality. And, importantly, a significant number of dams completely block access to once-highly productive habitat in the Columbia and Snake Rivers and their tributaries.

Dams are the major case of salmon and steelhead deaths:

The science demonstrates clearly that salmon and steelhead who live in the same Pacific Ocean have drastically different mortality rates depending on how many dams and reservoirs they encounter on their journey to and from the ocean. Fish who encounter four dams or less return at comparatively higher levels and are far more able to sustain themselves. Salmon and steelhead in the Snake River, however, encounter eight dams and reservoirs and are not sustaining themselves today. 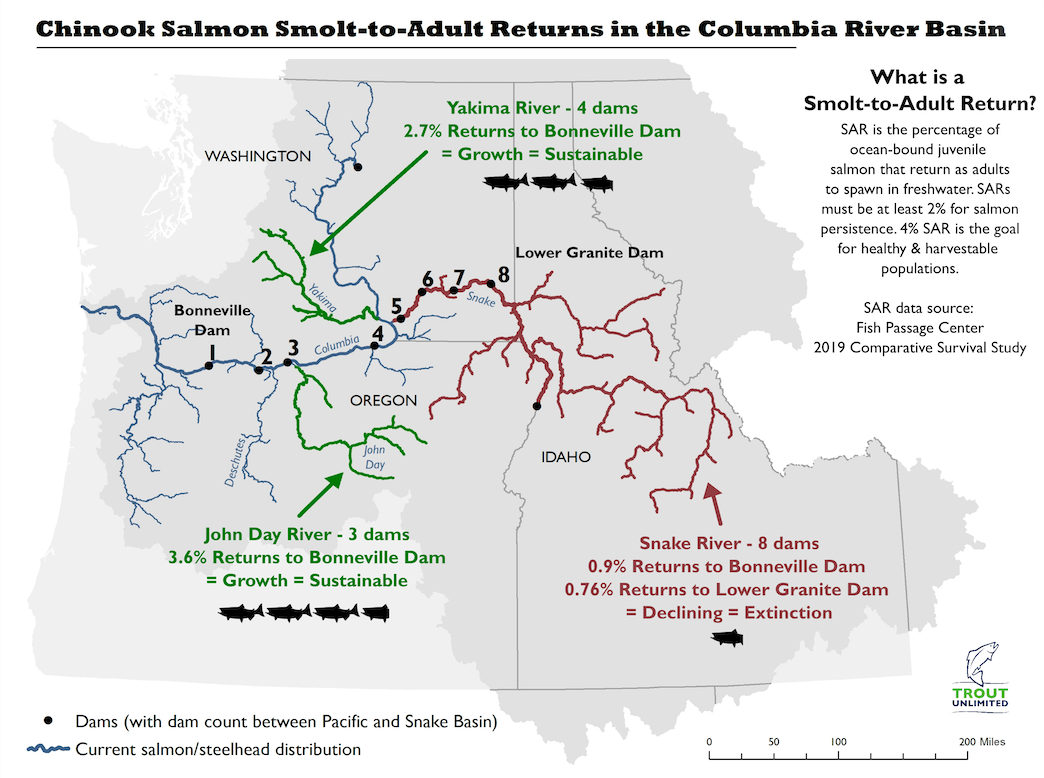 How do we know dams are the primary source of mortality for Snake River fish? Let’s look at the smolt-to-adult ratio of these populations. Smolt-to-adult ratio - or SAR - reflects the percentage of ocean-bound juvenile fish that return as adults to spawn in freshwater.

SAR is crucial as it’s the only metric that captures most of the cumulative impacts of the hydro system on salmon and steelhead, telling us how sustainable the returns of adults are over time. This is critical because even if high-quality habitats produce a lot of smolts, the population can only sustain if those smolts can make it out to the ocean and survive to return and spawn as adults at sufficient SAR.1

Before the last three Snake River dams were completed in the mid-1960s (Ice Harbor was in place, as were the Columbia dams), SAR for Snake River spring/summer Chinook salmon ranged from 3.5 to 6.5 percent (average 4 percent from 1964-1968).2

Rebuilding Snake River salmon and steelhead populations will require increasing their SAR. The Northwest Power and Conservation Council determined long ago that a SAR of 4 to 6 percent (that is, for every 100 smolts that head out to the ocean, 4 to 6 adults must successfully return to spawn) is needed to recover and maintain healthy, harvestable populations.2 Further, scientists have concluded that removing the four lower Snake River dams allows the fish to consistently achieve 4 to 6 percent SAR.2

Restoring the Snake River and its fish:

While both ocean and freshwater habitat conditions affect salmon survival and recovery, there is one big difference. Our decisions and policies - past, present and future - have a huge influence on the condition of freshwater habitat. By restoring the Snake River through dam removal, we will significantly increase salmon survival in freshwater and significantly decrease mortality caused by the dams and their reservoirs.

The science is clear: The four dams on the lower Snake River are the single-biggest source of human-caused mortality for the salmon and steelhead that call the Snake River Basin home. And removing the lower Snake River dams is the single most important action we can take to recover these fish and improve the quality of freshwater rivers and streams and help them survive their time in the ocean - regardless of its condition at any given time.