Welcome to Save Our wild Salmon’s Hot Water Report 2021, Week 12, our final issue for this summer!

This summer, we’ve provided updates on real-time water temperatures in the lower Snake and Columbia River reservoirs via graphs and analyses, a report on the highest weekly water temperature at the forebay/reservoir of each dam, and the status of adult returns for the different salmon and steelhead populations as they return to their natal spawning grounds. We heard first-hand from scientists and other experts about challenges facing the Columbia and Snake rivers - and the opportunities we have to restore health to these rivers, and help recover healthy, resilient fish populations and the many benefits they deliver to the Northwest’s culture, economy, and ecology.

The once-abundant anadromous native fish populations that call the Columbia-Snake River Basin home are struggling to survive in large part due to multiple harmful effects caused by the system of federal dams and reservoirs. The federal hydro-system creates conditions that harm and kill both juvenile and adult salmon and steelhead, including by elevating water temperatures in large, stagnant reservoirs in the summer months. As cold water species, these fish begin to suffer harmful effects when water temperatures exceed 68° Fahrenheit. The longer and higher temperatures rise above 68°F, the greater the harm, including migration disruption, increased metabolism, increased susceptibility to disease, reduced fecundity or reproductive potential, suffocation (warm water carries less oxygen) and in the worst case - death.

These harmful hot water episodes above 68 degrees in the Columbia and Snake rivers are increasing in duration, frequency, and intensity. Our changing climate is making an already bad situation for the Northwest’s emblematic fish even worse. Our region and nation must take urgent action to lower these high temperatures or scientists tell us that we will lose these species forever. Restoring a freely flowing lower Snake River by removing its four federal dams is almost certainly our only option for lowering water temperatures in this 140-mile stretch of river in southeast Washington State. Restoring the Snake River is one essential element of what must be a larger regional strategy to protect and rebuild healthy, abundant salmon and steelhead populations in order to benefit other fish and wildlife populations, including critically endangered Southern Resident orcas, to uphold our nation’s promises to Native American tribes, and to ensure prosperous communities across the Northwest. 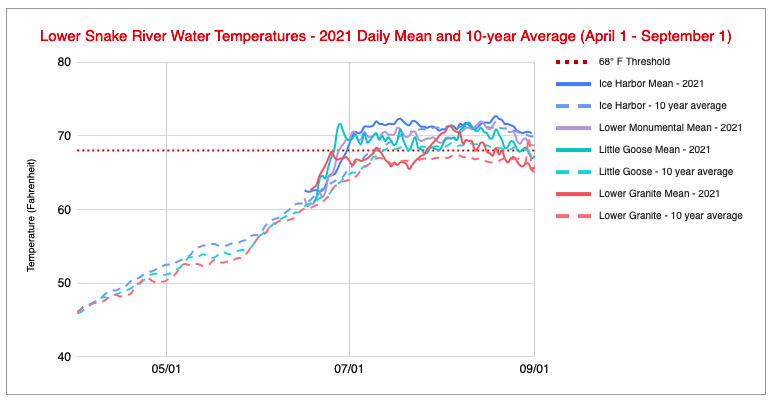 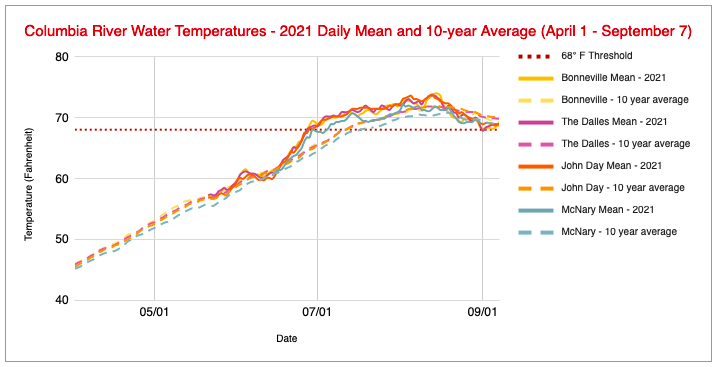 Another summer of brutally hot water, low salmon returns, and graphic fish kills points to an uncomfortable conclusion: the Columbia-Snake river hydro-system as it is currently operated by BPA and the Army Corps is incapable of complying with the Endangered Species Act and the Clean Water Act. In other words, the status quo is not only not working, it’s not even legal. Let’s cut through the fog of legal citations and lawyer-speak and look at what two of our nation’s most important environmental laws mandate with respect to Columbia Basin salmon. The Endangered Species Act essentially prohibits federal agencies (like BPA and the Army Corps) from making species go extinct. But that is precisely what the dams are doing, most dramatically with respect to Snake River salmon and steelhead. The rate at which Snake River fish survive their journeys down, and then back up, the dammed river is simply too low to prevent extinction or achieve recovery. That problem, in a nutshell, is why courts have repeatedly rejected federal plans (called “biological opinions” in ESA-speak) attempting to justify the dams’ compliance with the Endangered Species Act. Some backers of the Snake River dams have acknowledged this reality and asked past presidential administrations to remove salmon from the Endangered Species List. BPA and the Army Corps have taken a less direct approach: repeatedly putting forward plans that maintain the status quo but clearly violate the ESA, and defend those plans in court while salmon and steelhead inch closer to extinction. As multiple federal judges have hinted, only a major overhaul of the hydrosystem and its status quo operations will bring BPA and the Army Corps into compliance with the Endangered Species Act.

As required by the Clean Water Act, Oregon and Washington have set limits on Columbia and Snake river water temperatures to keep these rivers cool enough for salmon and steelhead. A recent report by the U.S. Environmental Protection Agency (EPA) details how dams on the Snake River make the water too hot for salmon and exceed the Clean Water Act’s temperature limits. The Army Corps has fought for decades to keep the dams from being regulated under the Clean Water Act, and there’s a reason: dams on the Lower Snake River will continue violating water quality standards absent profound changes to their configuration and operation. Those changes may be coming, however, as EPA and the Washington Dept. of Ecology seem poised to issue new Clean Water Act permits that will force the Army Corps to consider ways to keep the rivers cool.

Historically, abundant Snake and Columbia River salmon and steelhead delivered vast cultural, economic, nutritional, and ecological benefits to the people and fish and wildlife of the Pacific Northwest. Not long ago, the Columbia Basin would experience millions of adult salmon and steelhead that flooded into the Columbia River Basin each year. Chinook, or King salmon, are the largest and richest of the salmonid species. They are also notably the primary food source (roughly 80 percent of their overall diet) of the critically endangered Southern Resident orcas. Columbia Basin chinook can spend five or more years in the Pacific Ocean before they return to freshwater to spawn.

Snake and Columbia Basin fish, however, are in crisis - thirteen distinct populations in the Columbia Basin are at risk of extinction today. The health of these populations has plummeted over time from historic levels that were once in the hundreds of thousands or millions, depending on the particular population. Snake River salmon and steelhead populations have been in a steady decline for many years; they are returning this year at some of their lowest levels ever.

Climate change increases the urgency to remove these four dams and restore this river. The frequency, duration, and intensity of high harmful water temperatures in the four lower Snake River’s reservoirs have been steadily increasing within the last several decades – with increasingly devastating impacts on out-migrating juvenile fish and adults returning from the Pacific Ocean to spawn. In 2015, for example, due to the combined effects of extremely hot air and water temperatures, low 2014-15 snowpack that led to low 2015 runoff, and the presence of dams and their reservoirs, at least 96% of endangered returning adult Snake River sockeye salmon died - a species with an already low population level - during their upriver migration through the lower Columbia and Snake Rivers.

Rising temperatures in the four lower Snake River’s reservoirs along with climate change impacts have resulted in lower survival and reproductive success for endangered salmon and steelhead. Earlier in July, Columbia Riverkeeper released video footage and images that show heat-stressed sockeye salmon returning to the Columbia and Snake rivers. These sockeye have large, open lesions and fungus and it is predicted that these sockeye would not be able to spawn, and will instead die of heat stress and disease. As of August 24, just 1 sockeye has returned to Idaho. This year, given the extremely low returns of sockeye, the Idaho Fish and Game are trapping the sockeye that arrive at Lower Granite Dam and hauling them by truck to an Idaho Fish hatchery as a precautionary conservation measure, resulting in 28 sockeye that have been trapped and hauled.

This summer, we have seen low numbers of chinook, steelhead and sockeye returns to the Columbia River and Snake River. We cannot let low returns of salmon and steelhead continue as extinction of these fish are near. We have an opportunity to make critical changes that ensure the survival of wild salmon and steelhead, and increase the resilience of rivers and our climate, and meet the needs of people and communities across the Pacific Northwest. Upon decades worth of scientific research, it is clear that restoring the lower Snake River will dramatically lower water temperatures and restore 140-mile of the river and 14,000+ acres of riparian habitat and again offer diverse habitats found in living rivers, including additional cold water refugia currently lost as a result of these reservoirs today.

Restoring the lower Snake River is our very best opportunity to restore endangered salmon and steelhead to abundance in the Northwest. Removing the four lower Snake River Dams will restore the Northwest’s native fish, help feed starving orcas, will save American taxpayer and Northwest energy consumer dollars; create thousands of jobs regionally and invest in communities; and sustain a clean, reliable and affordable energy system. Removing these costly dams and restoring this historic river and its wild fish is our nation’s greatest river and salmon restoration opportunity today.