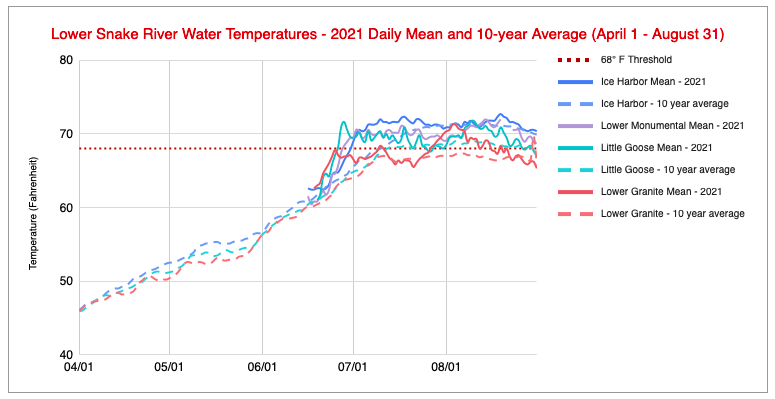 Fortunately, water temperatures have begun to drop but at this time they still remain high - and harmful - for salmon and steelhead in the lower Snake and lower Columbia River reservoirs: On the lower Snake River, the waters in the Ice Harbor, the Lower Monumental, and the Little Goose reservoirs continue to exceed the ‘harm threshold’ (68 degrees) this week. On August 25th, the Ice Harbor reservoir had a high mean temperature of 71.24°F and the Lower Monumental reservoir had a high mean temperature of 70.52°F. 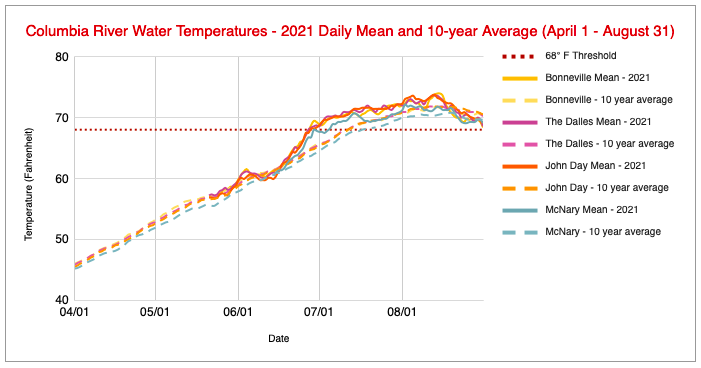 As we near the conclusion of the Hot Water Report for 2021, this week we present the latest information regarding the status of native fish returns for Snake River (1) wild Spring/Summer Chinook, (2) wild steelhead, and (3) wild/natural sockeye. As part of this review, we will look at how the current numbers of returning adults compare to established recovery goals - the adult returns deemed necessary to recover these populations and remove them from the Endangered Species Act list.

In summary - Snake River salmon and steelhead populations have been in a steady decline for many years, they are returning this year at some of their lowest levels ever. They are teetering today on the precipice of extinction. Without immediate and meaningful conservation actions, we will lose these populations forever.

The health of these populations has plummeted over time from historic levels that were once in the hundreds of thousands or millions, depending on the particular population. The four federal dams and their reservoirs on the lower Snake River in southeast Washington State continue to be a main obstacle to recovery. The rising temperatures caused by these stagnant reservoirs and reductions in snowpack in recent decades due to climate change are contributing to lower survival and reproductive success for already endangered salmon and steelhead. As a result, wild Snake River Chinook, steelhead, and sockeye are much closer to extinction than established recovery goals.

Despite spending billions of dollars on recovery projects, long-term trends for these populations have left these species at grave risk of extinction. Below, you will find the high-end recovery goals for wild Snake River salmon and steelhead that have been set to reflect the healthy run levels that returned to Idaho in the 1950s - before the dams were constructed. These goals represent self-sustaining, harvestable populations that currently available, high quality habitat in the Snake River Basin upstream from the dams could support. Restoring abundant populations will allow salmon to once again to play their essential role as a keystone species, feeding countless other animals and plants, and supporting Northwest cultures and economies. Restoring the lower Snake River through dam removal is our very best river and salmon restoration opportunity anywhere in the nation today. And, for the survival and recovery of Snake River populations, dam removal is an essential piece of a larger recovery strategy. Scientists predict it can regularly produce up to and more than a million adult salmon and steelhead entering the mouth of the Columbia River annually in the spring and summer months.

Spring/summer chinook were once the Pacific Northwest’s most widely distributed and abundant salmon, numbering in the millions. The Salmon River alone produced 39 percent of the spring chinook and 45 percent of the summer chinook in the entire Columbia River Basin.1 Currently, an estimated 7,062 wild spring/summer Chinook have returned from the ocean to their upriver spawning grounds in Idaho.

In 2020, just 8,556 wild spring/summer Chinook returned to Idaho. Compared to the 4,152 wild Chinook that returned in 2019, this may seem like a strong improvement and a sign of a population on the right track. However, the oscillating nature of salmon returns means that variation from one year to the next is normal. The recovery goal for wild spring/summer chinook calls for a 10-year average of 127,000 returning fish. Notably, the 2020 adult return is less than 7% of this recovery target, and the 10-year average is just 11% of that target.

Sockeye salmon spawn in the glacial lakes of the Sawtooth Valley and, historically, a few other high elevation lakes in central Idaho.1 Historic runs to Idaho’s high mountain lakes used to be 100,000+ sockeye per year but have also severely declined over the years.1 In the early 1990s, there were no adult returns for sockeye salmon due to harmful conditions the lower Snake River dams produced and as a result the sockeye were first listed as an endangered species under the Endangered Species Act in 1991.2

The 10-year average for sockeye returning to the Stanley Basin in central Idaho is just 94 fish, 1% of the recovery goal of 9,000 wild sockeye per year. As of August 24, just 1 sockeye has returned to Idaho. This year, Idaho Fish and Game are trapping the sockeye that arrive at Lower Granite Dam and hauling them by truck to an Idaho Fish hatchery as a precautionary conservation measure, given the extremely low returns, resulting in 28 sockeye that have been trapped and hauled.3

Since the completion of the Columbia Basin’s last major dams on the lower Snake River in the 1970s, salmon survival rates have fallen far short of minimum levels every year. This trend continues today. Earlier this year, The Nez Perce Tribe’s Department of Fisheries Resources Management presented their latest analysis: “Snake Basin Chinook and Steelhead Quasi-Extinction Threshold Alarm and Call to Action.” This report shows that nearly half of the wild spring chinook populations in the Snake River Basin have crossed a critical threshold known as the Quasi-Extinction Threshold (QET), signaling they are nearing extinction and without immediate intervention, many will not persist. In addition, the river’s steelhead populations also face alarming threats to their continued existence. QET means 50 or fewer spawners on the spawning grounds for 4 consecutive years, and the QET also signifies that adult salmon abundance in a population nearing absolute extinction and the probability of recovery is low without substantial intervention.4

This year’s record low numbers of steelhead returns to the Columbia River and Snake River has caused Oregon and Washington’s Departments of Fish and Wildlife to adopt new immediate protective measures.6 ODFW announced that Oregon rivers connected to the Columbia system will be closed to steelhead retention from Wednesday, September 1st, to December 31st.6 Specifically, the lower Umatilla, Deschutes, and John Day Rivers including the Walla Walla River (starting at the Oregon-Washington border) will be closed to steelhead fishing.7

WDFW commissioners plan on shutting down steelhead fishing from the Snake River delta at Burbank to the Idaho-Washington border at Clarkston.6 The department has not yet released an official announcement regarding measures to protect wild steelhead runs on the Walla Walla River on the Washington side of the border.6