Welcome to Save Our wild Salmon’s Hot Water Report 2021. During the summer, this weekly report is providing updates on real-time water temperatures in the lower Snake and Columbia river reservoirs via graphs and analyses, reports on the highest weekly water temperature at the forebay/reservoir of each dam, and the status of adult returns for different salmon and steelhead populations as they make their way back to their natal spawning grounds. We’ll share information from scientists, fishers, guides, advocates, and other experts about the challenges facing the Columbia and Snake rivers - and opportunities we have to restore healthy rivers and to recover abundant fish populations and the many benefits they deliver to the Northwest’s culture, economy, and ecology.

The once-abundant anadromous native fish populations that call the Columbia-Snake River Basin home are struggling to survive primarily due to multiple harmful effects caused by the system of federal dams and their reservoirs. The federal hydro-system creates conditions that harm and kill both juvenile and adult fish, including by elevating water temperatures in large, stagnant reservoirs, especially in the summer months. As cold water species, salmon and steelhead begin to suffer harmful effects when water temperatures exceed 68° Fahrenheit. The longer and higher temperatures rise above 68°F, the greater the harm, including disruption in their migration, increased metabolism, increased susceptibility to disease, reduced fecundity or reproductive potential (by reducing egg viability), suffocation, and in the worst case - death. 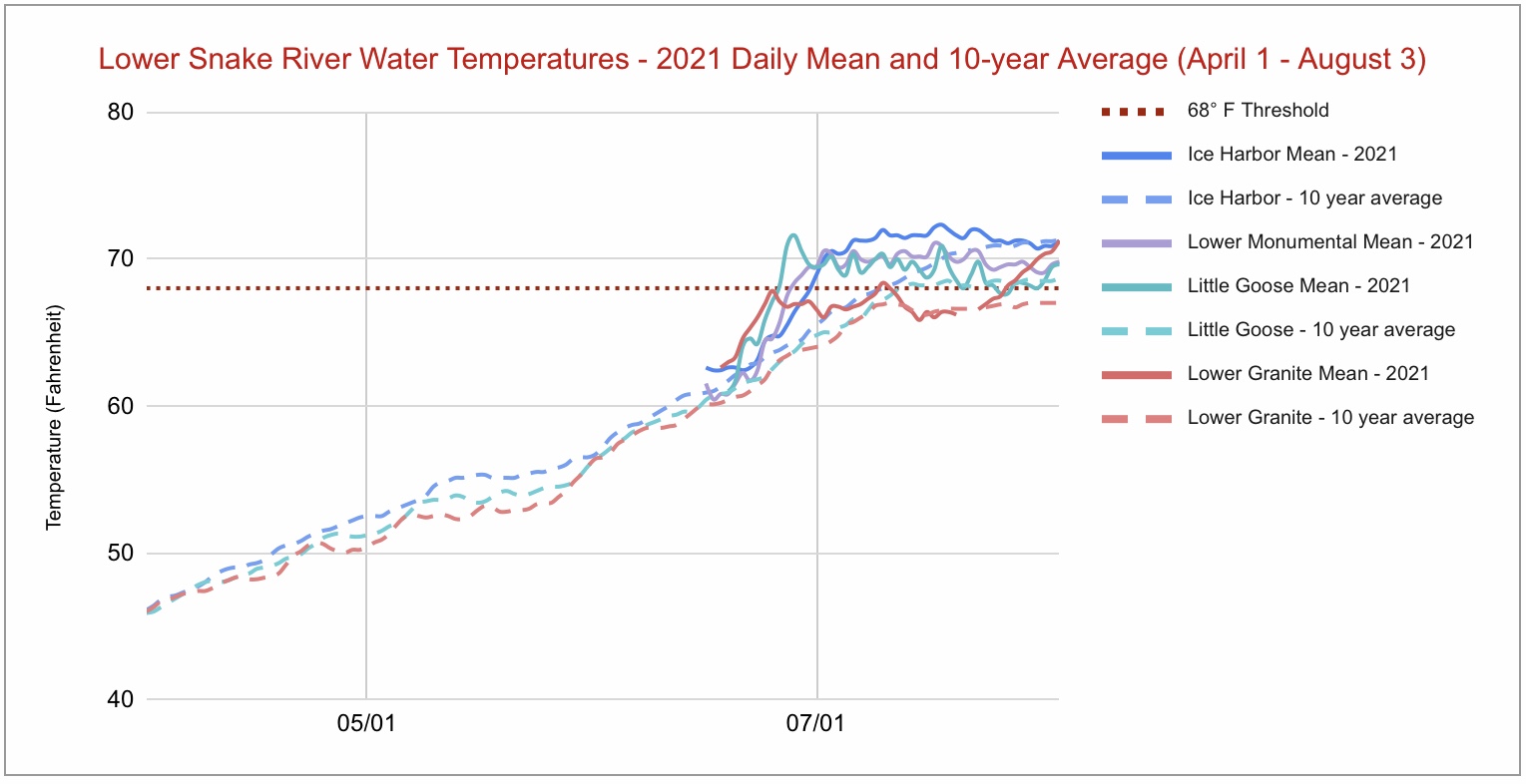 The daily mean temperature at the four reservoir forebays (immediately upstream from the dam) in the lower Snake River (above) and the lower Columbia River (below) for 2021 is represented with solid lines and their 10-year average (2011-2021) temperatures with dashed lines of the same color. The dotted horizontal line across the graph represents the 68°F “harm threshold” for adult and juvenile fish. Salmon and steelhead begin to suffer harmful effects when water temperatures exceed 68° Fahrenheit. The longer temperatures remain above 68°F and the higher the temperatures rise above 68°F, the more severe the potential effects. 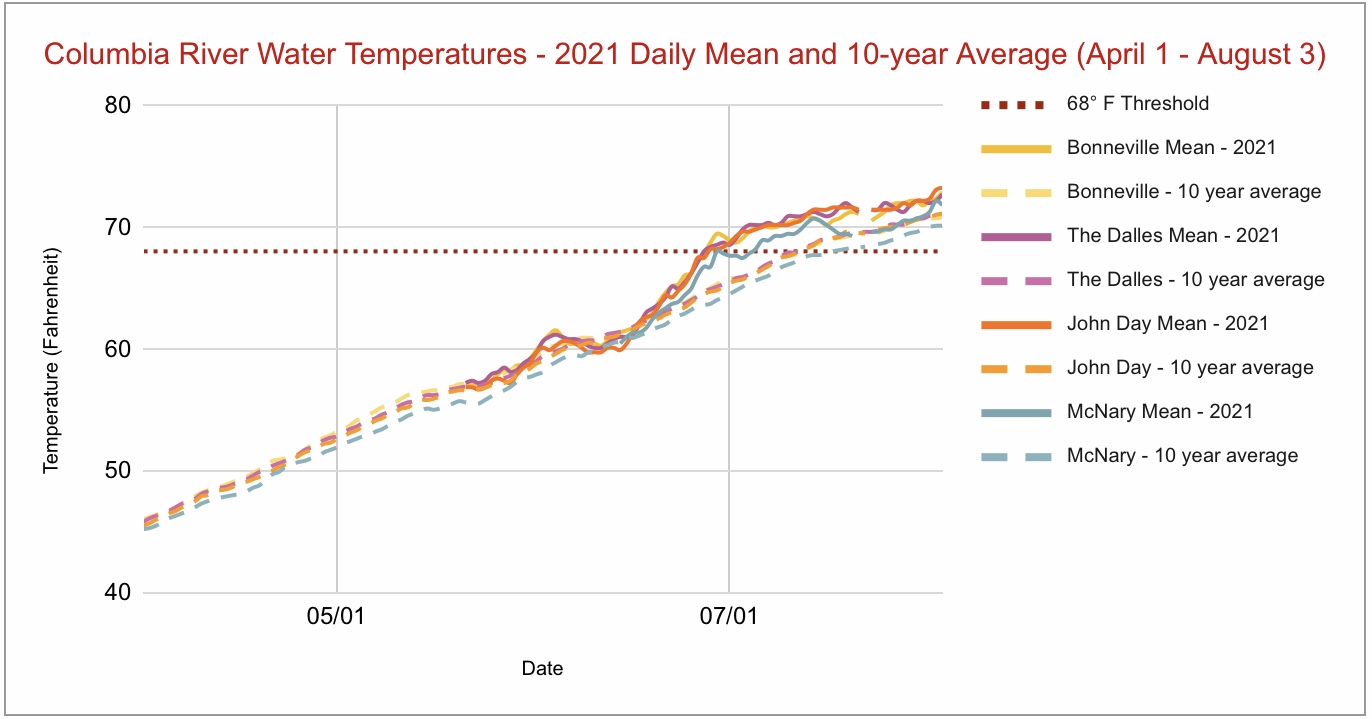 On the lower Columbia River, all reservoirs registered high temperatures above 70°F for multiple days. The reservoir behind the John Day Dam had the highest temperature this week at 73.58°F, followed closely by the rest of the dams with a high temperature of 73.04°F

This week, we have a special addition to the Hot Water Report focusing in on the current status of imperiled Snake River salmon and steelhead populations. This article was contributed by Stephen Pfeiffer, Conservation Associate at Idaho Rivers United - an SOS member organization based in Boise, ID.

The Snake River's anadromous fish populations are continue to teeter on the brink of extinction. These salmon and steelhead face multiple obstacles, including intolerably hot water in the summer months in the Snake River reservoirs. Below, we present background information on and current status of native fish returns, including (1) wild Snake River Spring/Summer Chinook, (2) wild steelhead, and (3) wild/natural sockeye. We will also look at how the current numbers of returning adults compare to established recovery goals - the adults returns deemed necessary to recover these populations and remove them from the Endangered Species Act list.

What Are Wild Salmon and Steelhead Returns?
The size and condition of a given population of salmon or steelhead is determined by the number of adult fish that return from the ocean to their upriver spawning grounds each year. The most straightforward method to measure the size of a salmon run is to count the fish as they pass upstream. These counts today occur at the dams themselves.

Snake River salmon and steelhead runs are counted at Lower Granite Dam, the last impediment on the river before the fish enter hundreds of miles of tributary spawning and rearing habitat in central Idaho and eastern Oregon, and southeast Washington State. Returning salmon have been counted at the farthest upstream dam on the lower Snake River since Ice Harbor Dam was first completed in 1962. This dataset of 60+ years, coupled with informed estimates of run sizes before the dams were constructed, provides valuable insight into the precipitous declines wild salmon and steelhead have experienced in the last 4-5 decades.

Historical Context
The dire situation Snake River wild salmon face can be lost on the public when a return increases from one year to the next. Enthusiasm about an uptick in returns in a given year is a symptom of the “shifting baseline syndrome” where the perception of what constitutes a healthy population is based only on recent reference points. These benchmarks are very low already as a result of population declines that have steadily worsened across decades. The result is that our collective perception of what constitutes a healthy salmon run continually shifting downward. Put simply, the Snake River Basin historically (before the dams) produced many millions of returning adult salmon and steelhead. It produced nearly half of all the spring chinook that returned annually to the Columbia Basin overall. Notably, Columbia-Snake River spring chinook are very important to hungry Southern Resident orcas because they have been available as large, numerous and fat-rich prey in Northwest coastal waters during winter months when few other fish are.

Recovery Goals: Informed By the Past, Potential for the Future
High end recovery goals for wild Snake River salmon and steelhead have been set to reflect the healthy runs that returned to Idaho in the 1950s. The goals represent self-sustaining, harvestable populations that currently available, high quality habitat in the Snake River Basin could support. Restoring abundant populations will allow salmon to once again function as keystone species, feeding countless animals and plants, and supporting Northwesterners' cultures and economies. Restoring the lower Snake River through dam removal is our very best river and salmon restoration opportunity anywhere in the nation today. Scientists predict it can regularly produce more than a million adult salmon and steelhead entering the mouth of the Columbia River in the spring and summer months.

Current Status of Snake River Returns
Wild Snake River chinook as well as sockeye and steelhead, are much closer to extinction than recovery. In 2020, just 8,556 wild spring/summer Chinook returned to Idaho. Compared to the 4,152 wild Chinook that returned in 2019, this may seem like a strong improvement and a sign of a population on the right track. However, the oscillating nature of salmon returns means that variation from one year to the next is normal. The recovery goal for wild spring/summer chinook calls for a 10-year average of 127,000 returning fish. Notably, the 2020 adult return is less than 7% of this recovery target and the 10 year average is just 11% of that target. We have a long way to go to recover these stocks and it will require some big changes to accomplish it.

Hot Water Impacts
The hot, dry conditions of summer 2021 are forecast to become increasingly the norm due to climate change. Periods of prolonged hot water in the Columbia-Snake River reservoirs are lethal to these coldwater species returning to the Snake River. Hot water particularly impacts sockeye which migrate upstream during peak heat in July and August.

The 10 year average for sockeye returning to the Stanley Basin in central Idaho is just 94 fish, 1% of the recovery goal. This year, the fish aren’t even being given the chance to return to spawning grounds in central Idaho's mountain lakes. Idaho Fish and Game is trapping the sockeye that arrive at Lower Granite Dam and hauling them by truck to an Idaho fish hatchery as a precautionary conservation measure.

Hot water this year is jeopardizing the existence of this already very fragile sockeye run. Last week, video footage and images showed sockeye with large, open lesions and fungus caused by hot water conditions from the lower Snake and lower Columbia River reservoirs. Restoring the lower Snake River will significantly help to address many of the problems that these fish face today - hot water, a slowed current, increased predator populations, increased susceptibility to disease, and increased juvenile salmon migration times. Restoring this historic salmon river is essential for protecting these fish from extinction and rebuilding the many benefits they provide for the people of the Northwest and our nation.