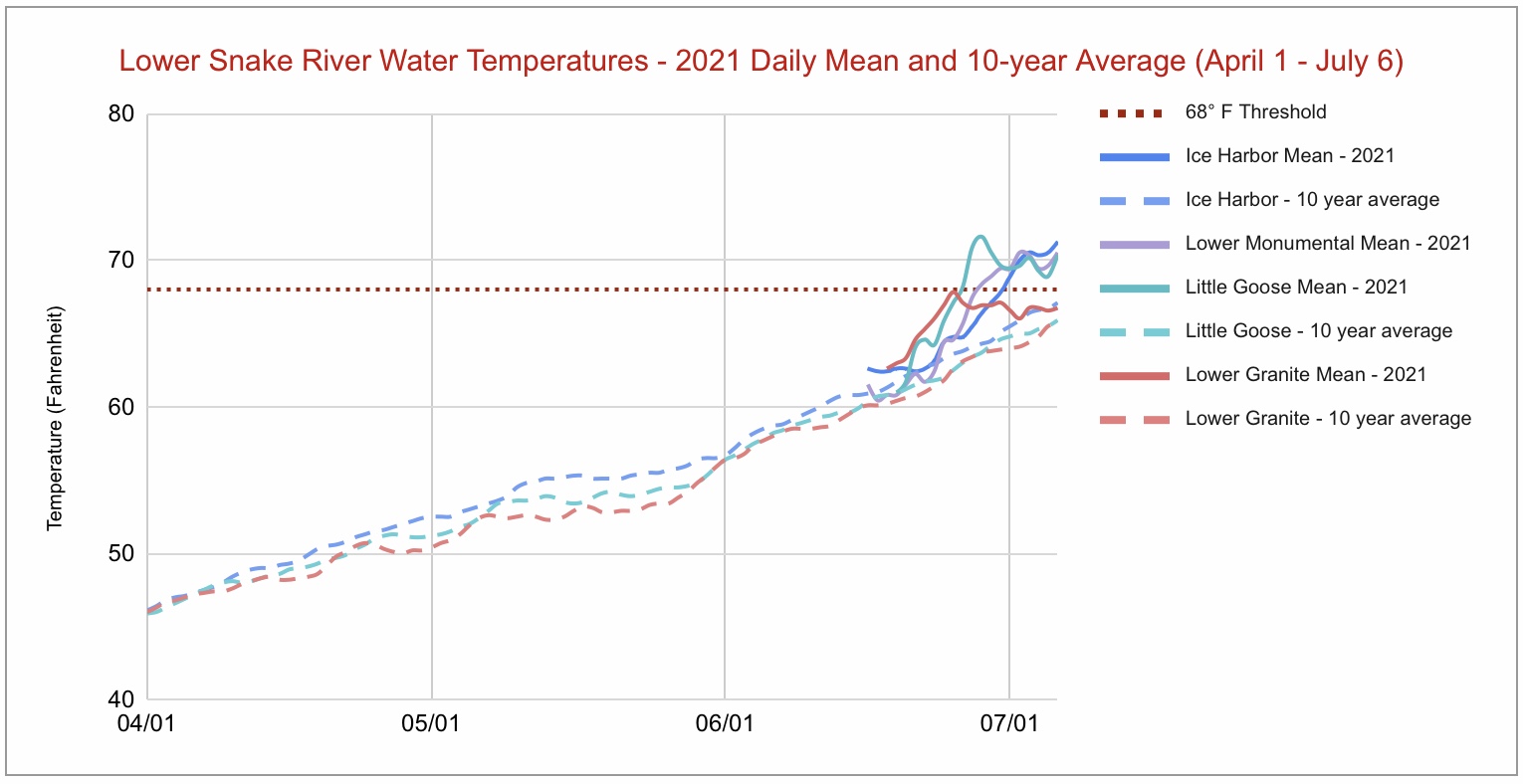 Harmful water temperatures continue to rise in the lower Snake River reservoirs: This week, all reservoirs exceed the 10-year average for this time of the year. On the lower Snake River, the Ice Harbor, Lower Monumental, and Little Goose reservoirs have all peaked over the threshold (68 degrees) this week. On July 1st, the Ice Harbor’s reservoir significantly peaked above the 68°F threshold and continued to peak throughout this week, with a high mean temperature of 71.24°F.

This week, Lower Granite Dam's reservoir had mean temperatures just below the 68 degree threshold. Temperatures in this reservoir in the summer months are typically slightly cooler than the three downstream reservoirs on the lower Snake because the U.S. Army Corps of Engineers releases cold water from behind Dworshak Dam into the Clearwater River (tributary to the lower Snake River) in early July. However this year, on June 22nd, due to the extreme heat wave in the Pacific Northwest, the Army Corps began to release 43-degree Fahrenheit (6-degree Celsius) water from Dworshak Dam to prevent the water temperature from reaching 68 degrees Fahrenheit in the Lower Granite Dam’s reservoir near Lewiston (ID) and Clarkston (WA). Despite the release of cold water from the Dworshak reservoir since late June, all reservoirs immediately downstream from the Lower Granite Dam continue to experience temperatures above 68°F. As long as these four dams remain in place, the benefits of Dworshak’s cold flows are limited and serve only as a short-term solution to cooling water temperatures to the Lower Granite Dam’s reservoir. EPA models show that a freely flowing lower Snake would carry these cooler waters all the way downstream to its confluence with the Columbia River near the Tri-Cities (WA) (see Issue 2 for more information). 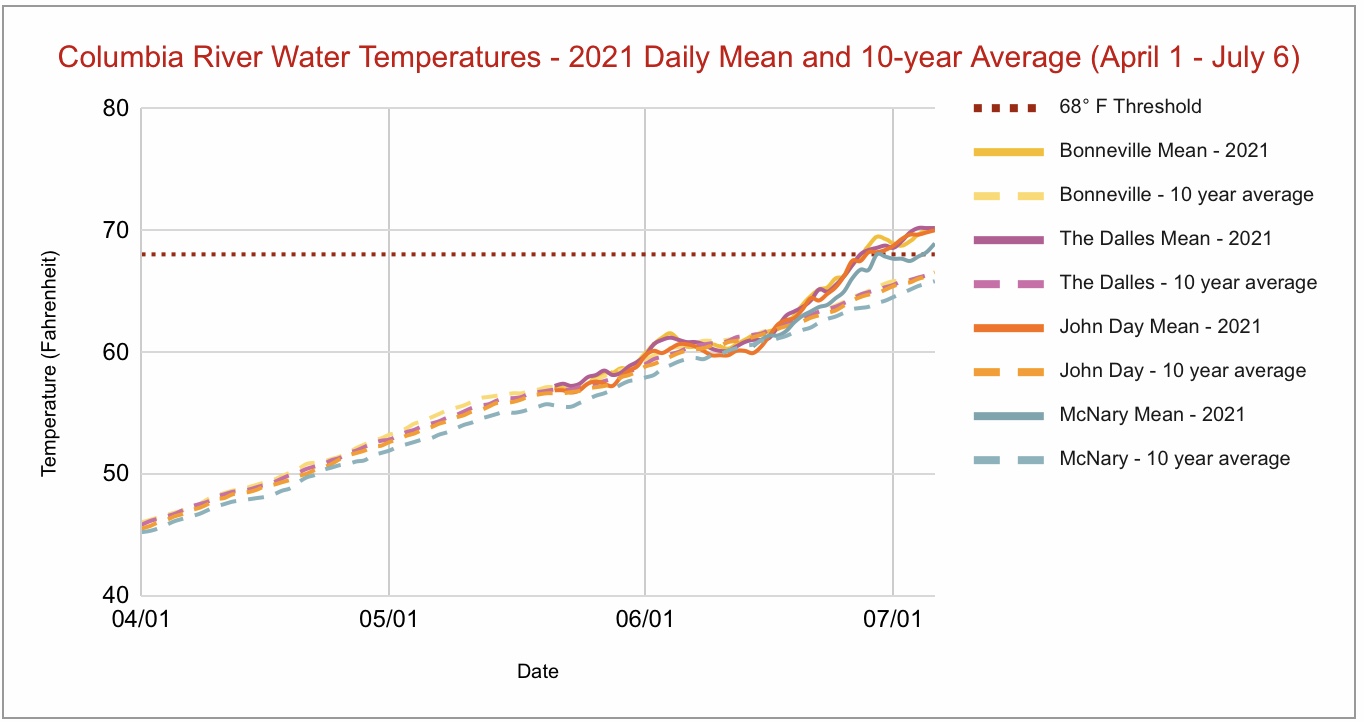 Like the lower Snake River, current reservoir temperatures in the lower Columbia River are above the 10-year average for this time of the year. Additionally, all four reservoirs registered temperatures above 68°F. The longer temperatures remain above 68°F and the higher they rise above this key threshold, the more severe the stresses and harms. (see Issue 1 for more information).

IV. A Review of 2015 Hot Water and Fish Kills in the Lower Snake and the lower Columbia Rivers 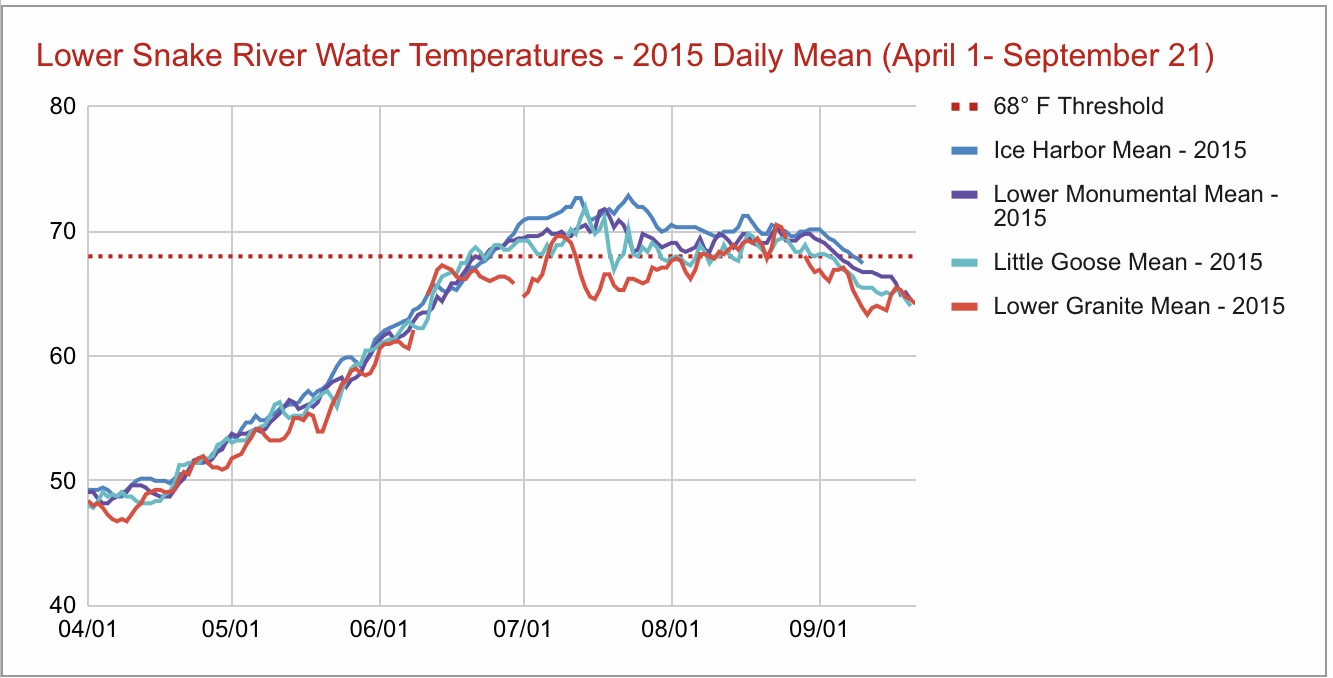 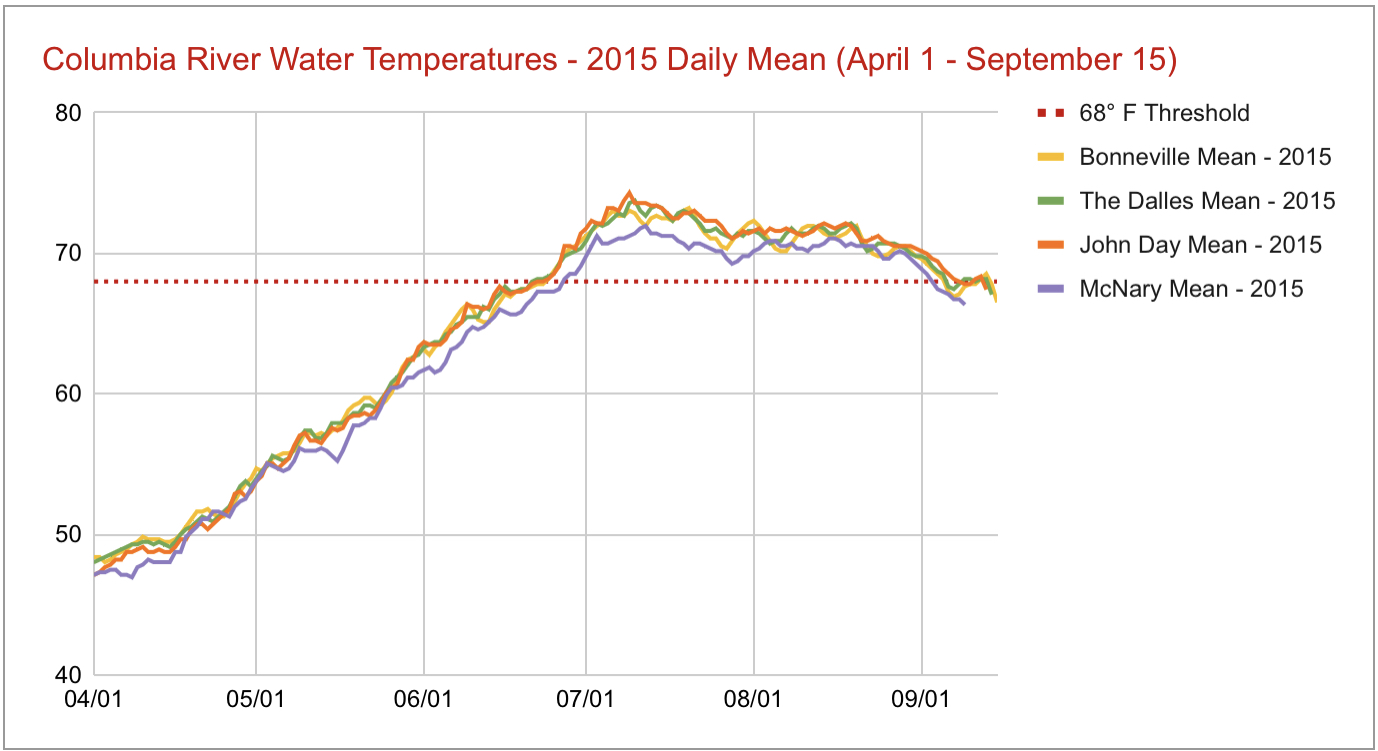 *Note on 2015 Lower Snake and Columbia River Temperatures Graphs: The daily mean temperature at the four reservoir forebays in the lower Snake River and the lower Columbia River for 2015 is represented with solid lines. The mean water temperature data from these reports comes from the USGS Current Conditions for Washington State.

Beginning in late June of 2015, the Columbia-Snake Basin began to experience what ultimately became 70 days of sustained hot water that killed an estimated 250,000 adult sockeye salmon as they returned from the Pacific Ocean en route to their natal rivers and streams in the Columbia-Snake Basin. It was an unprecedented and devastating fish die-off. Early in the migration season, sockeye experienced record hot water temperatures above 68°F on June 24th at Bonneville Dam on the Columbia River and on June 22nd at Ice Harbor Dam on the lower Snake River. In July, reservoirs in the lower Columbia and lower Snake River reached temperatures of 72-73°F for a period of several weeks. Notably, the Ice Harbor reservoir on the lower Snake reached a high water temperature of 73.40°F on July 12th, 2015. Also, the Bonneville reservoir reached 73.40°F on July 9th and July 10th, and July 19th-July 21st. The hot river waters continued through August into early September, when temperatures finally dropped below 68°F.

Due to the combined effects of extremely hot air and water temperatures, low 2014-15 snowpack that led to low 2015 runoff, and the presence of dams and their reservoirs, at least 96% of endangered returning adult Snake River sockeye salmon died - a species with an already low population level - during their upriver migration through the lower Columbia and Snake Rivers. Before 2015, the Snake River sockeye and other Snake River salmon (sockeye, spring/summer Chinook, fall Chinook, and steelhead) already experienced reduced migrations and high mortality due to high water temperatures above 68°F (20°C).2 Each year, steelhead, fall Chinook, and sockeye have greater exposure to high temperatures than adult spring/summer Chinook because they migrate later in the summer when temperatures are highest.2 Snake River sockeye and other Snake River salmon faced deadly conditions in 2015, and climate change exacerbates these extreme conditions - lower water flows and hotter water temperatures - causing the reservoir to become dangerous environments for endangered and threatened salmon species each year.2,3

2021's water temperatures in the Snake and Columbia rivers are shaping up to be as bad or worse as 2015. A recent Idaho Statesman article, “This is worse’ than 2015: Northwest weather heats rivers, puts Idaho sockeye in danger” highlights that “salmon in the Columbia, Snake and even Salmon rivers are swimming into lethally hot waters that are at even higher temperatures than when nearly all of the Columbia and Snake sockeye died in 2015.” In late June this year, water temperatures in the reservoir behind the Little Goose dam on the lower Snake River of a high maximum temperature of 73.04°F and a high mean temperature of 71.60°F on June 28th. This week, Ice Harbor is the last reservoir to have reached above 68°F, with a high maximum temperature of 71.60°F on July 6th, which strongly indicates that salmon are experiencing hot water temperatures earlier than in 2015. Unfortunately, so far this summer, water conditions are continuing above 68°F (20°C), and without comprehensive solutions, endangered salmon will continue to suffer high death rates.2

Through the years, scientists have raised the alarm about the pressing threat that hot waters represent to salmon and steelhead. Most recently in February this year, 68 salmon and fisheries scientists wrote a letter to Northwest policymakers with actions necessary to protect and restore abundant salmon and steelhead runs to the Columbia-Snake River Basin.

In the letter, fish scientists noted the cumulative impacts of the 8 dams Snake River salmon must navigate migrating as both smolts headed downstream and adults returning to their home rivers have thwarted salmon and steelhead recovery. The lower Snake River dams create a lethal corridor blocking salmon from high quality spawning habitat found in the Snake River basin, and opening access to thousands of miles of pristine habitat provides the highest likelihood of restoring salmon to healthy numbers. Furthermore, to prevent salmon species from migrating through dangerous water temperatures and to prevent fish deaths like in 2015, we need Congressional leadership in 2021 to make long overdue investments to: (1) restore salmon and protect orcas; (2) honor commitments to Northwest tribes; (3) strengthen our energy and transportation infrastructure, and (4) sustain more just and prosperous communities across the region. Restoring the lower Snake River is our very best opportunity to restore endangered salmon and steelhead to abundance in the Northwest.4

References:
1. Lessons from the 2015 Columbia-Snake Salmon Kill From the desk of Pat Ford (2016).
2. Letter from fifty-five scientists to Northwest policymakers: Science-based solutions are needed to address increasingly lethal water temperatures in the lower Snake River (2019).
3. Earthjustice, WHY IS IT DIFFERENT THIS TIME? Why the removal of the four Snake River dams is a feasible and necessary action to save wild salmon.
4. Letter from 68 scientists to Northwest policymakers: Scientists’ letter on the need for lower Snake River dam removal to protect salmon and steelhead from extinction and restore abundant, fishable population (2021).