Welcome to Save Our wild Salmon’s Hot Water Report 2021. During the summer, this weekly report will provide an update on real-time water temperatures in the lower Snake and Columbia river reservoirs via graphs and analyses, a report on high weekly water temperature at the forebay/reservoir of each dam, and the status of adult returns for the different salmon and steelhead populations as they make their way back to their natal spawning grounds. We’ll also hear first-hand from scientists, anglers, guides, advocates, and other experts about challenges facing the Columbia and Snake rivers - and the opportunities we have to restore the healthier river conditions needed to support abundant fish populations and the many benefits they bring to the Northwest’s culture, economy and ecology.

The once-abundant anadromous native fish populations that call the Columbia-Snake River Basin home are struggling to survive today primarily due to harmful effects caused by the system of federal dams and their reservoirs. The federal hydro-system creates conditions that harm and kill both juvenile and adult salmon and steelhead, including by elevating water temperatures in the large, stagnant reservoirs, especially in the summer months. As cold water species, these fish begin to suffer harmful effects when water temperatures exceed 68° Fahrenheit. The longer and higher temperatures rise above 68°F, the greater the harm, including disruption in their migration, increased metabolism, increased susceptibility to disease, reduced fecundity or reproductive potential (by reducing egg viability), and in the worst case - death.

These hot water episodes above 68 degrees in the Columbia and Snake Rivers are increasing in duration, frequency, and intensity. Our changing climate is making a bad situation for the Northwest’s iconic fish worse. Our region and nation must take urgent action to lower these high temperatures or we will lose these species forever. Restoring a freely flowing lower Snake River by removing its four federal dams is our best and likely only option for lowering water temperatures in this 140-mile stretch of river in southeast Washington State. Restoring the Snake River is one essential part of what must be a larger regional strategy to protect and rebuild healthy, abundant salmon and steelhead populations in order to benefit other fish and wildlife populations, including critically endangered Southern Resident orcas, to honor tribal rights, and to ensure prosperous communities across the Northwest. 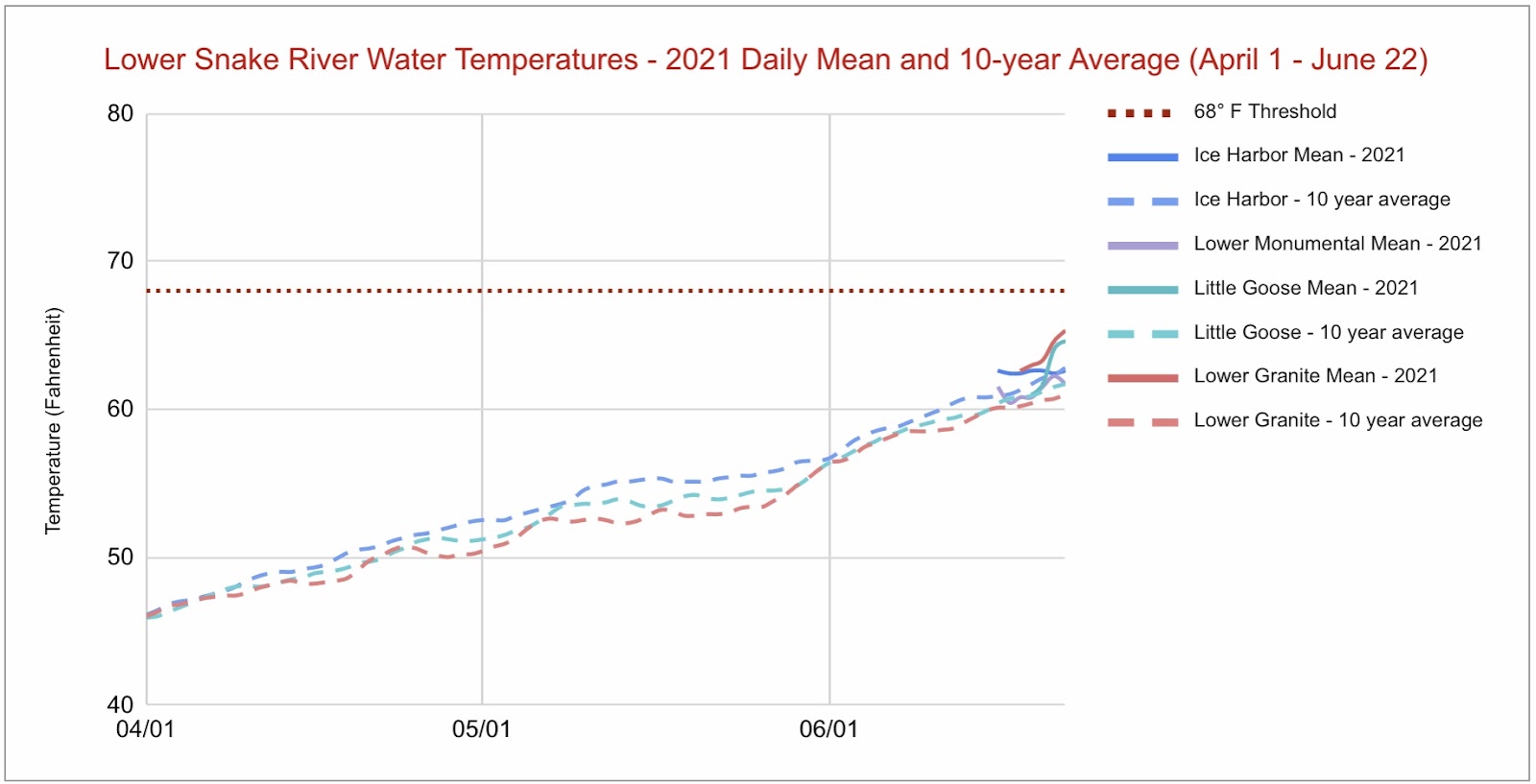 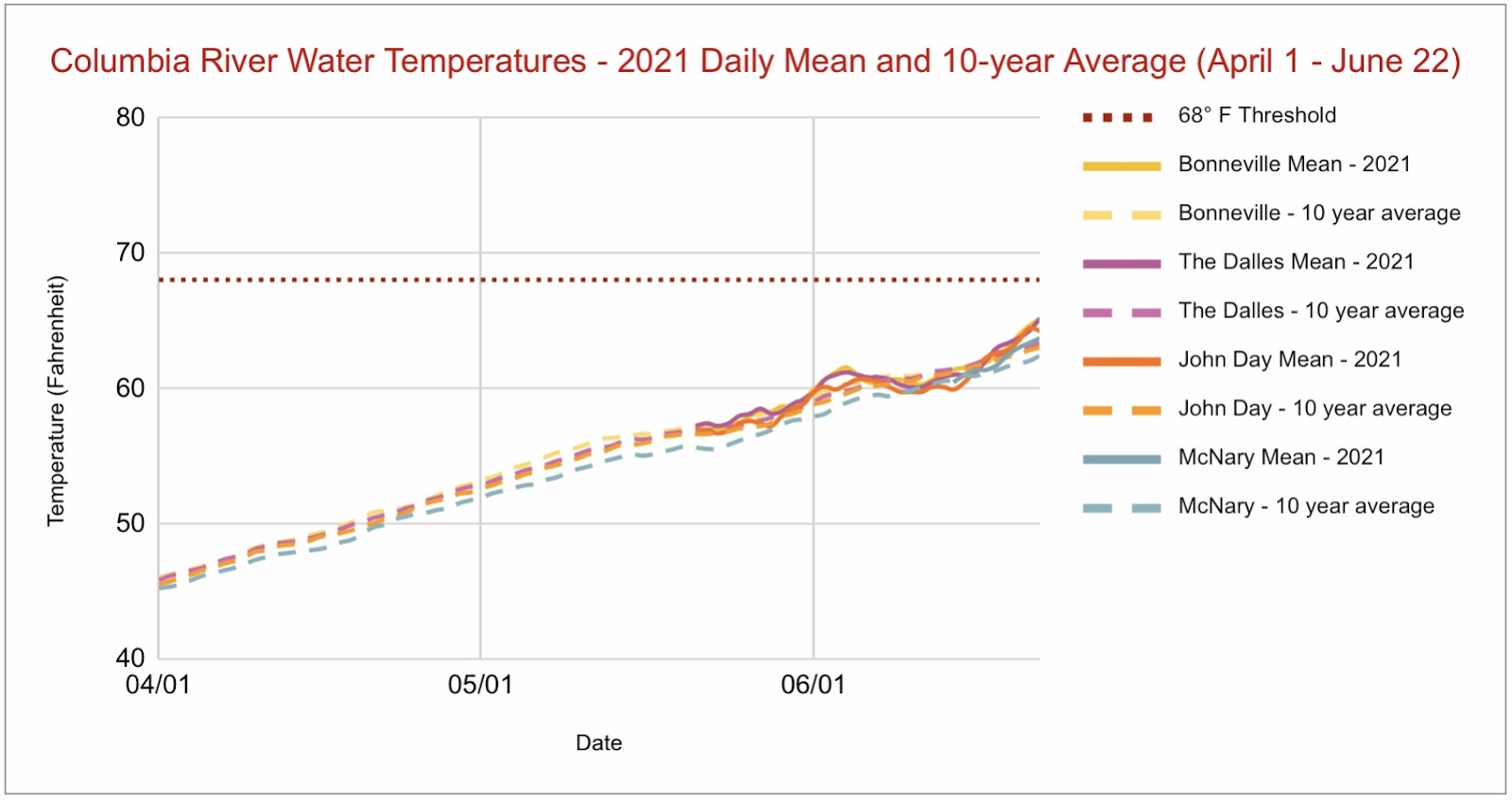 The McNary Dam registered the highest temperature on the lower Columbia River this week at 65.48°F. The Dalles and the Bonneville Dam also registered a high temperature at 65.3°F.

IV. How the Snake and Columbia River reservoirs impact cold-water species of salmon and steelhead. 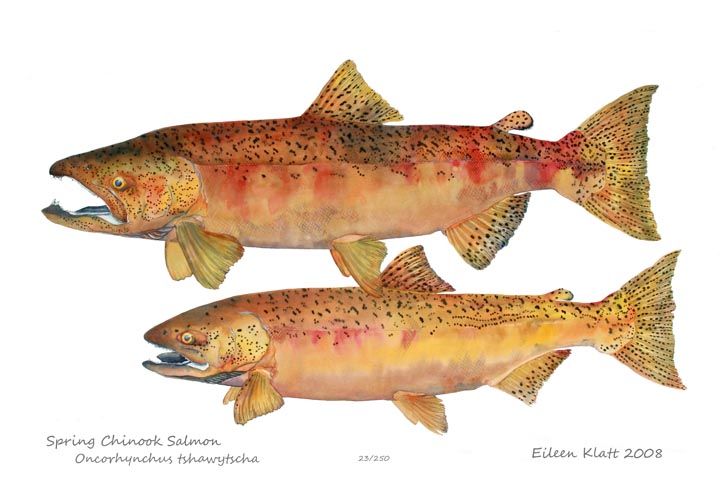 Historically, abundant Snake and Columbia River salmon and steelhead delivered vast cultural, economic, nutritional, and ecological benefits to the people and fish and wildlife of the Pacific Northwest. Not long ago, the Columbia Basin would experience millions of adult salmon and steelhead that flooded into the Columbia River Basin each year. Chinook, or King salmon, are the largest and richest of the salmonid species. They are also notably the primary food source (roughly 80 percent of their overall diet) of the critically endangered Southern Resident orcas. Columbia Basin chinook can spend five or more years in the Pacific Ocean before they return to freshwater to spawn.

These fish, however, are in crisis - thirteen distinct populations in the Columbia Basin are at risk of extinction today. The elevated water temperatures caused by the reservoirs and made worse by a changing climate must be addressed or scientists tell us we will lose these fish forever. Reservoirs created by these dams warm water above the temperatures of freely flowing rivers by slowing the current and creating large pools that absorb large amounts of solar radiation. These bodies of water inundate and destroy diverse micro-habitats that healthy rivers support, including cold-water refuges that salmon and steelhead rely upon during their migration in summer months. When available, these vital pockets of cold water can enable adult (moving upstream) and juvenile fish (moving downstream) to rest and recover before continuing their migration. Rising temperatures and reductions in snowpack in recent decades due to climate change has resulted in lower survival and reproductive success for endangered salmon and steelhead.

How temperature affects salmon behavior, reproduction, and survival: According to the National Wildlife Federation, the optimum water temperature range for most salmon is approximately 55 to 64 degrees Fahrenheit. While different stocks and species of salmon and steelhead may have different requirements and temperature tolerances, the National Ocean and Atmospheric Administration indicates that Chinook salmon, for example, prefer/require certain water temperatures for all phases of their life history: spawning, egg survival, smoltification, and migration:

Influence of water temperatures on smoltification by Chinook salmon:

The lower Snake and Columbia river dams have disrupted the salmon’s life cycle in various ways, including by driving water temperatures past 68°F in the summer for weeks at a time. This week, the dams in the lower Columbia River and the Little Goose and Lower Granite dams in the lower Snake River are reaching the above optimum water temperature range of 55 to 64 degrees Fahrenheit.

Restoring the lower Snake River is our only feasible option for addressing its dangerously high water temperatures. River restoration will also help address other problems created for fish by the dams. It will, for example, significantly reduce predator populations and by increasing current velocity, significantly decrease juvenile salmon migration times to the estuary. All things considered, bypassing the lower Snake River dams is an essential ingredient for protecting salmon and steelhead from extinction and for rebuilding their populations and the many benefits they provide for the people and ecosystems of the Pacific Northwest and nation.

V. ABOUT THE SAVE OUR WILD SALMON COALITION

Founded in 1991, Save Our wild Salmon (SOS) is a diverse coalition of organizations working together to secure policies to protect and restore healthy, self-sustaining and fishable populations of salmon and steelhead in the marine- and fresh-waters of the Pacific Northwest. As many as 16 million salmon and steelhead once returned to the Columbia-Snake River Basin annually. Today in the Snake River Basin, all four remaining populations face extinction. The steep losses of this keystone species in the Columbia Basin and across the Northwest has had devastating effects on many communities, cultures, economies and other fish and wildlife populations.