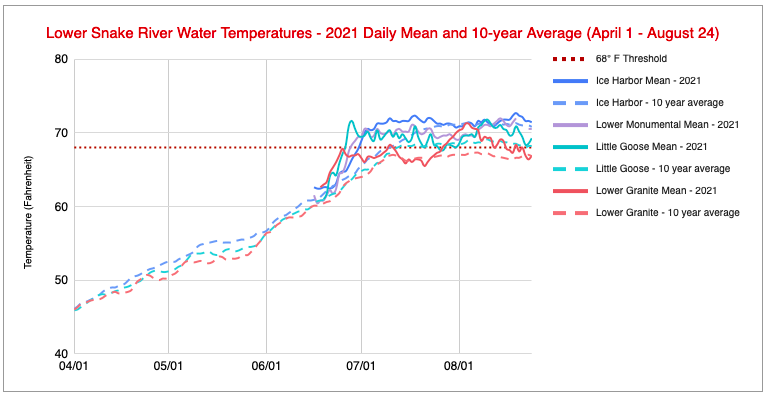 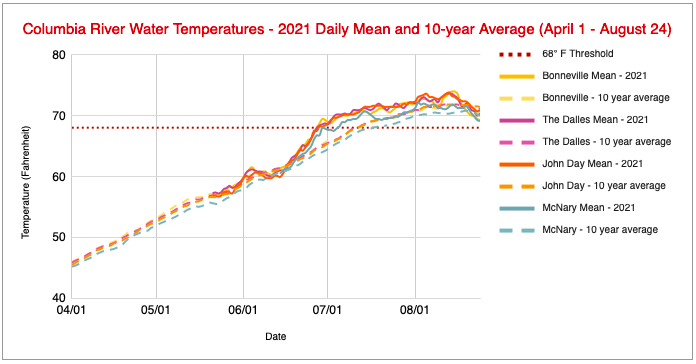 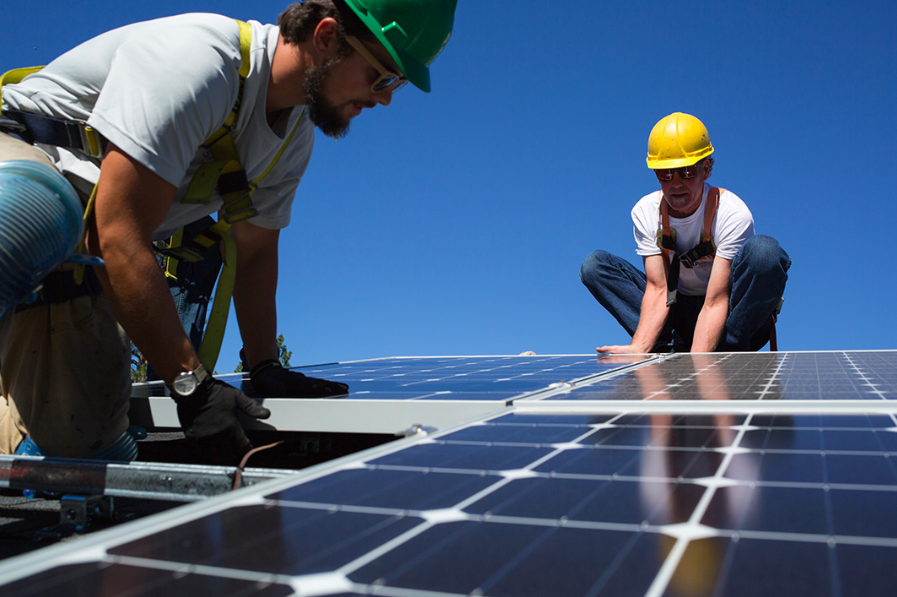 In the Pacific Northwest (and everywhere else), we are experiencing the deadly effects of climate change.
It is, among other impacts, reducing snowpack that our region’s hydropower production depends on. With the recent IPCC report, science strongly indicates that the Pacific Northwest is expected to have more extremely hot days and diminished snowpacks, causing rivers to have lower flows and higher temperatures.1 Climate change is already creating these extreme conditions and causing reservoirs to be more dangerous for endangered and threatened salmon species each year.2,3

As global warming worsens, the lower Snake River Dams will become progressively less reliable as an energy source – especially in summer. And the shallow, slow-running river will become even warmer, further reducing salmon survival and abundance. Scientists predict that removing the four lower Snake River dams and restoring a free-flowing river can help to significantly mitigate climate impacts on salmon and steelhead and help ensure a healthy, sustainable future for endangered salmon and steelhead - and the communities that rely upon them.4

Washington is the fourth state to enact legislation to drastically reduce climate change impacts by adopting a plan and timeline for transitioning to 100 percent carbon-free electricity.5 The Washington Clean Energy Transformation Act commits Washington to aggressively transform its electricity system to carbon-neutral electricity by 2030 and 100 percent clean electricity by 2045.6 Washington State is now on a pathway to replace its non-renewable energy resources with carbon-free, renewable, affordable, and salmon-friendly alternatives.7 Removal of the lower Snake River dams and replacement of their energy services must become part of this plan.

We have an opportunity - and necessity - today to make critical changes in the Northwest to protect, restore and reconnect the freshwater habitats that salmon and steelhead depend upon. At the same time, our salmon recovery strategies must also (1) help address larger regional efforts to significantly reduce carbon emissions and transition to carbon-free, renewable and ecologically-sustainable resources; (2) address the harmful effects (altered hydrograph, hot river temperatures, etc) created by the federal hydro-system and now made worse by a changing climate in order to increase the resilience of these river systems and the fish themselves; and (3) help support and maintain an affordable energy system for Northwest people and communities.

The four federal dams on the lower Snake River in Washington State — Ice Harbor, Lower Monumental, Little Goose, and Lower Granite were built between 1955 and 1975. They are now in need of extensive maintenance and upgrades to the dams’ hydropower turbines, which are estimated to cost the Bonneville Power Administration (BPA) and its ratepayers over a billion dollars.8 The U.S. Army Corps of Engineers, which operates the dams, announced a $58 million project in 2016 to upgrade just two of the six turbines at Ice Harbor, indicating the significant investments required to upgrade and maintain these dams moving forward. The four dams supply just 4% of the region’s electricity.9,10 These investments would be better spent on carbon-free, renewable, and ecologically-sustainable energy alternatives.

Each year, the four lower Snake River dams produce less than 1,000 average megawatts (aMW). Most of their energy is produced in the spring during the snowmelt – a time of high supply and low price.11 In winter and late summer, when electricity is most needed and most valuable, these four dams generate less than 425-525 megawatts because there is very little water available in the river to spin turbines.11 Climate experts predict we’ll have less water available in the years ahead, which means these aging dams will produce less power while costing more to repair.

A highly dynamic energy sector today also means that the electricity these four dams produce can be easily and affordably replaced. Studies conclude that the economic benefits of salmon and steelhead recovery exceed the costs to replace the dams’ seasonally limited power.11 With renewable energy technologies expanding and evolving, we can integrate new renewable resources and invest in energy efficiency projects to replace the modest energy services the dams provide today.

Two earlier studies also found promising results: we can replace the power from the four LSR dams at little additional cost to customers through new, renewable energy, purchases of clean energy from existing sources, and smart planning and system coordination.13,14 Decades of research also show that replacing hydropower energy with renewable resources like wind and solar has little to no increase in household bills or greenhouse gas emissions. In addition, developing wind and solar replacement for the dams on the lower Snake River will provide thousands of jobs across Northwest communities.9

Cold waters required by migrating salmonids are extremely limited in the Columbia-Snake River hydrosystem today; there are no additional resources available that can significantly cool the river. Restoring the lower Snake River will significantly reduce mainstem water temperatures on a long-term basis, and is likely the only action that can do so to avoid the extinction for the Northwest’s native fish and the many benefits they bring to our region.