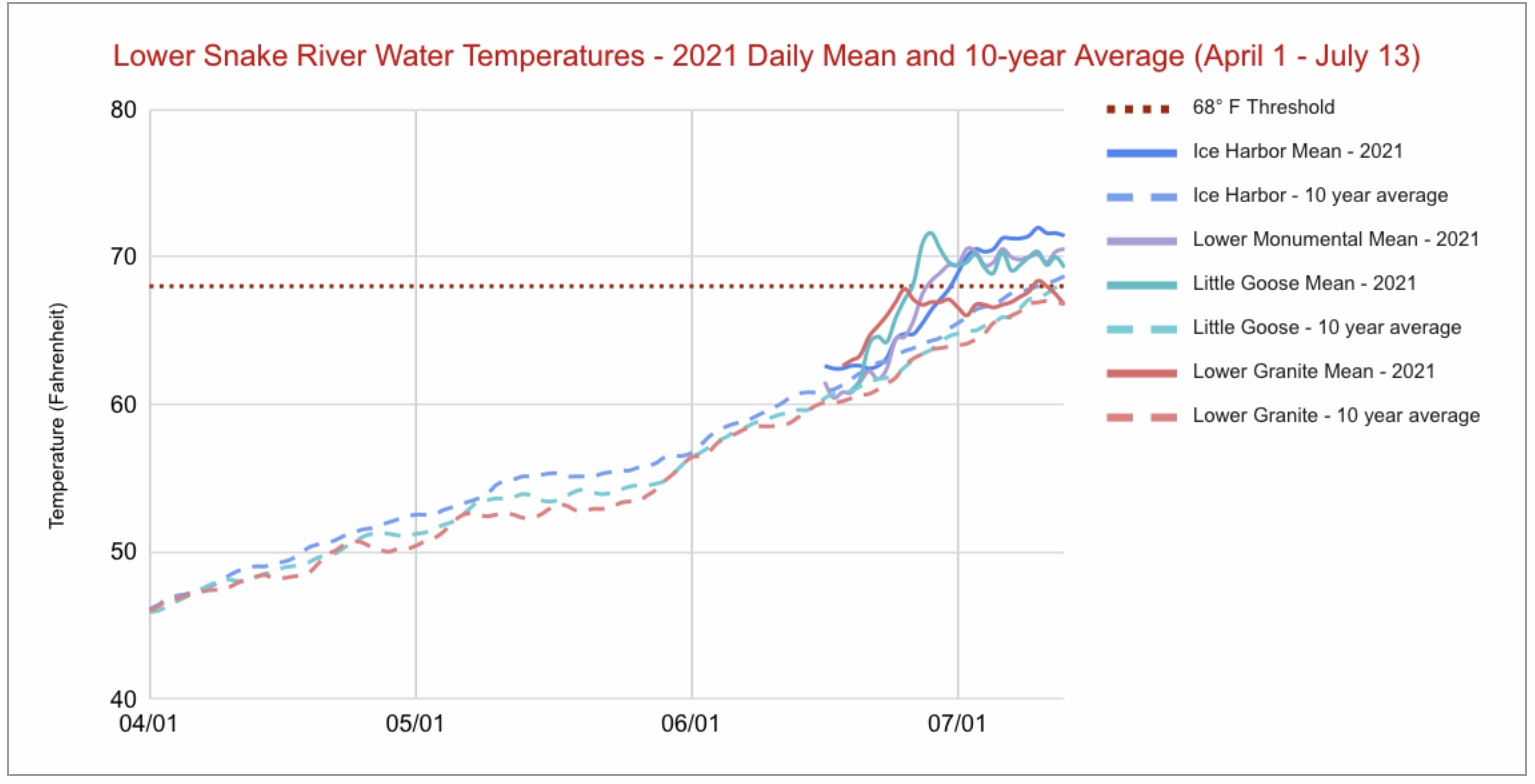 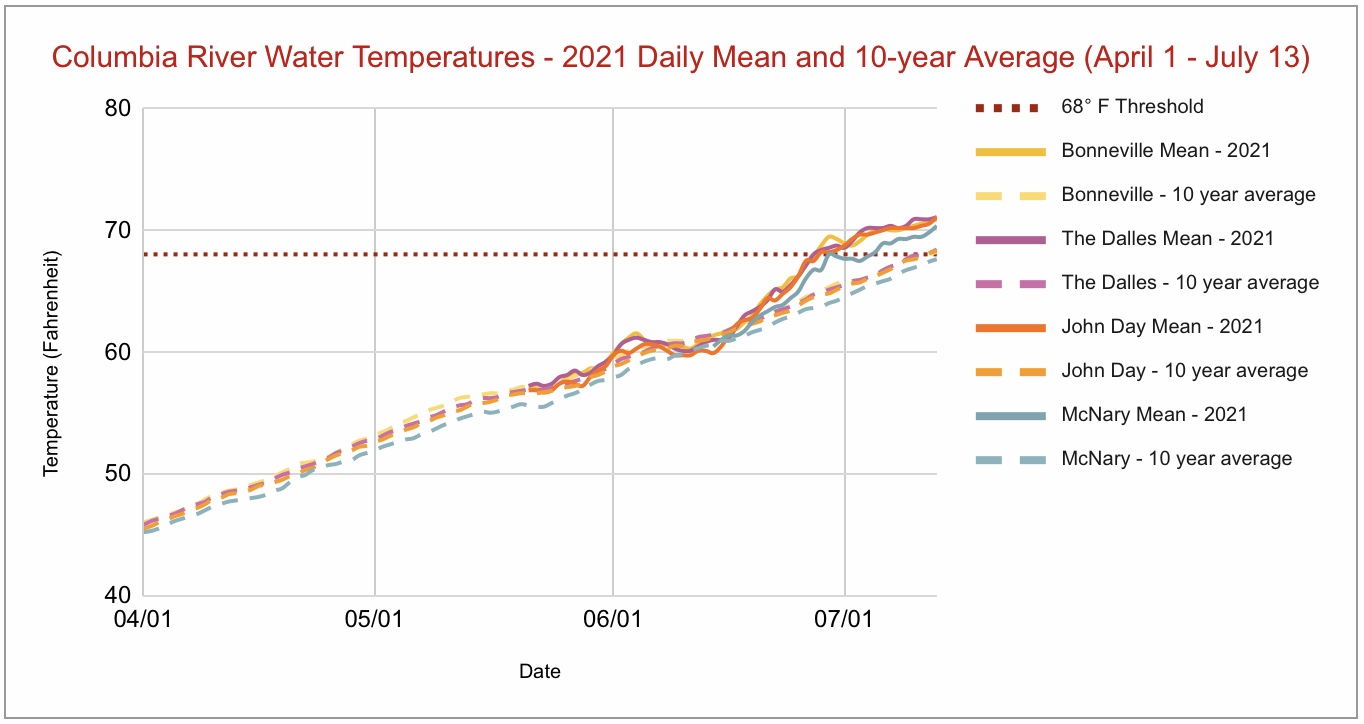 On the lower Columbia River, all reservoirs registered high temperatures above 69°F for multiple days. The Dalles and the John Day Dams had the highest temperature this week at 71.42°F, followed closely by the Bonneville Dam with a high temperature of 71.24°F.

Since time immemorial, the Nez Perce Tribe, also recognized as the Nimiipuu people, have been “connected to the lands and waters of modern-day Idaho, Washington, Oregon, and Montana long before the creation of the Nez Perce Reservation.”1 As a sovereign nation within the United States, the Nez Perce Tribe retains the “inherent right to fish at usual and accustomed fishing stations, and hunt, gather, and graze livestock on open and unclaimed lands, all outside of the reservation boundary.”1 However, due to “colonial encroachment, dam construction, and non-tribal fishing,” the numbers of traditional fishing sites for the Nez Perce Tribe and the number of fish have declined.2 The Nez Perce Tribe’s Department of Fisheries Resources Management is a critical program that protects and enhances fishing rights reserved by the Tribe in its treaties with the United States.3 Notably, the Department of Fisheries Resources Management successfully managed to bring back Snake River Fall chinook from the brink of extinction, re-established coho salmon, once extirpated from the Snake River Basin, and has become one of the largest and most successful tribal fisheries programs in the United States.3

Earlier this year, the Department of Fisheries Resources Management presented their analysis called “Snake Basin Chinook and Steelhead Quasi-Extinction Threshold Alarm and Call to Action.” The analysis indicates that nearly half of the wild spring chinook populations in the Snake River Basin have crossed a critical threshold known as the Quasi-Extinction Threshold (QET), signaling they are nearing extinction and without intervention, many may not persist. In addition, the river’s steelhead populations also face alarming threats to their continued existence.

To understand what Quasi-Extinction Threshold (QET) means, the department outlined several definitions including: QET means 50 or fewer spawners on the spawning grounds for 4 consecutive years, and the QET also signifies that adult salmon abundance in a population nearing absolute extinction and the probability of recovery is low without substantial intervention.4 During the ‘Salmon Orca Summit’ in July 2021, Dave Johnson, Manager of the Nez Perce Tribe’s Department of Fisheries Resources Management, presented this analysis and stated, “Quasi-Extinction means, aside from biological terminology, you are running out of options. When you have fewer than 50 fish on spawning grounds, the genetic diversity is really limited. Your ability to pull these fish out of inbreeding depression and other stochastic type risks is really limited. Any type of environmental hazard can cause havoc when you have fish populations that are so low. We are certainly running out of management options.”5 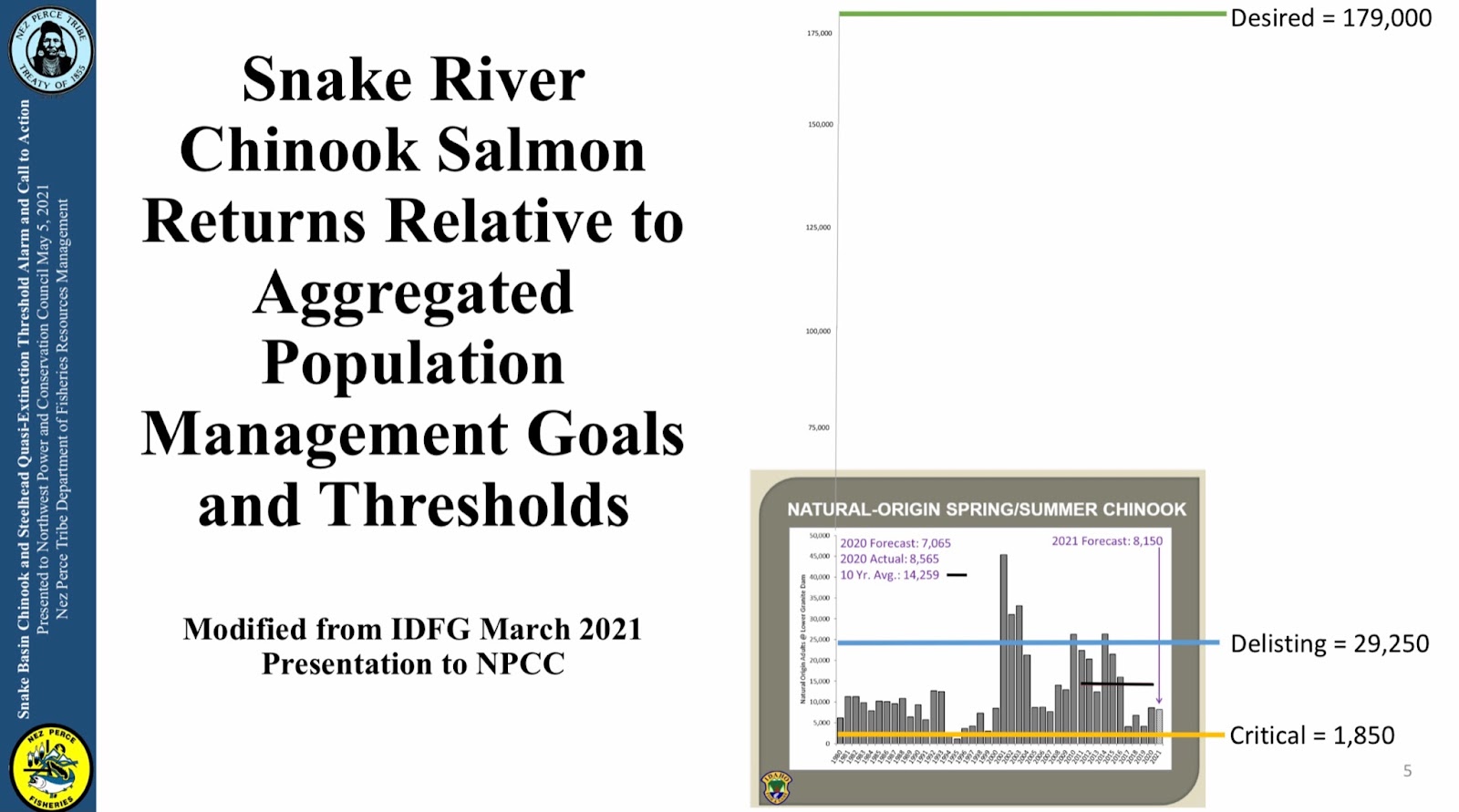 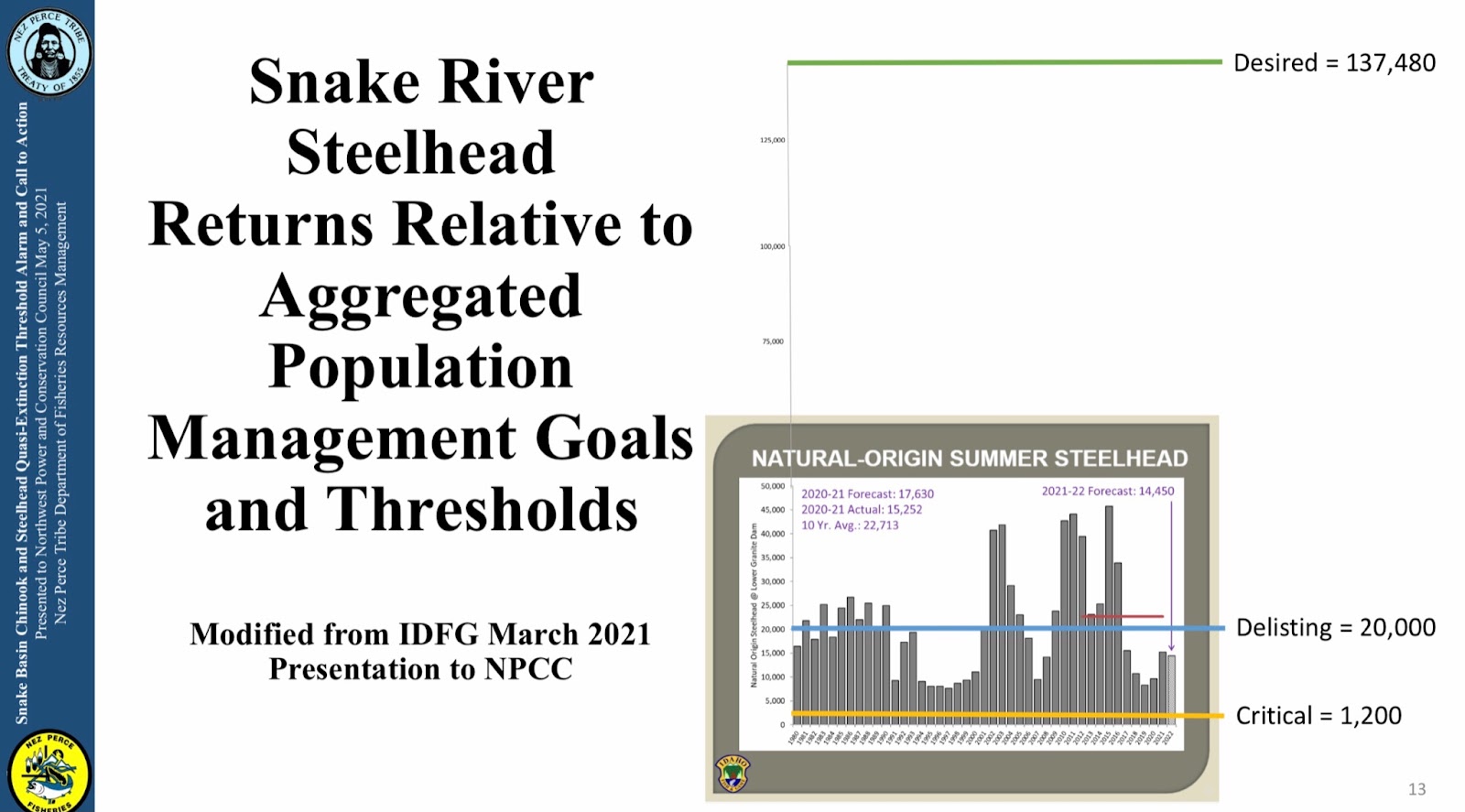 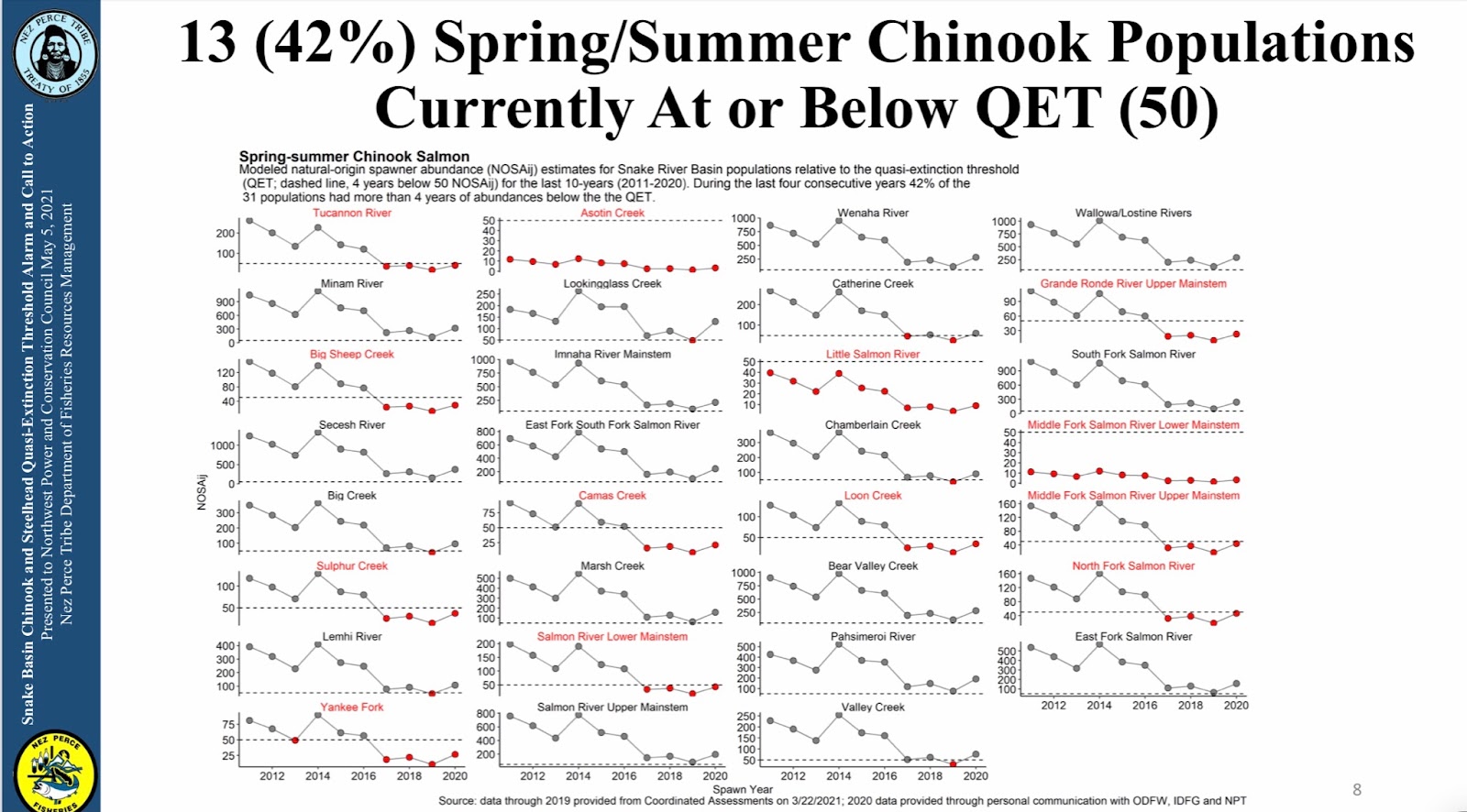 For the spring and summer chinook populations, the graph above reflects the numbers of spawners in all 31 populations listed under the Endangered Species Act in the Snake River Basin. The department modeled the natural-origin spawner abundance estimates for Snake River Basin populations relative to the QET (dash line meaning 4 years below 50 fish) for the last 10-years (2011-2020).4 The dots on the graph signifies how many spawners were on the spawning grounds in that year.5 The red dots indicate that there were 50 or fewer spawners, but more importantly, the red title for that population indicates that there have been 50 or fewer natural origin spawners on the spawning grounds for four consecutive years.5 During the last four consecutive years, 13 (42%) of the 31 populations had more than 4 years of abundances below the QET.4 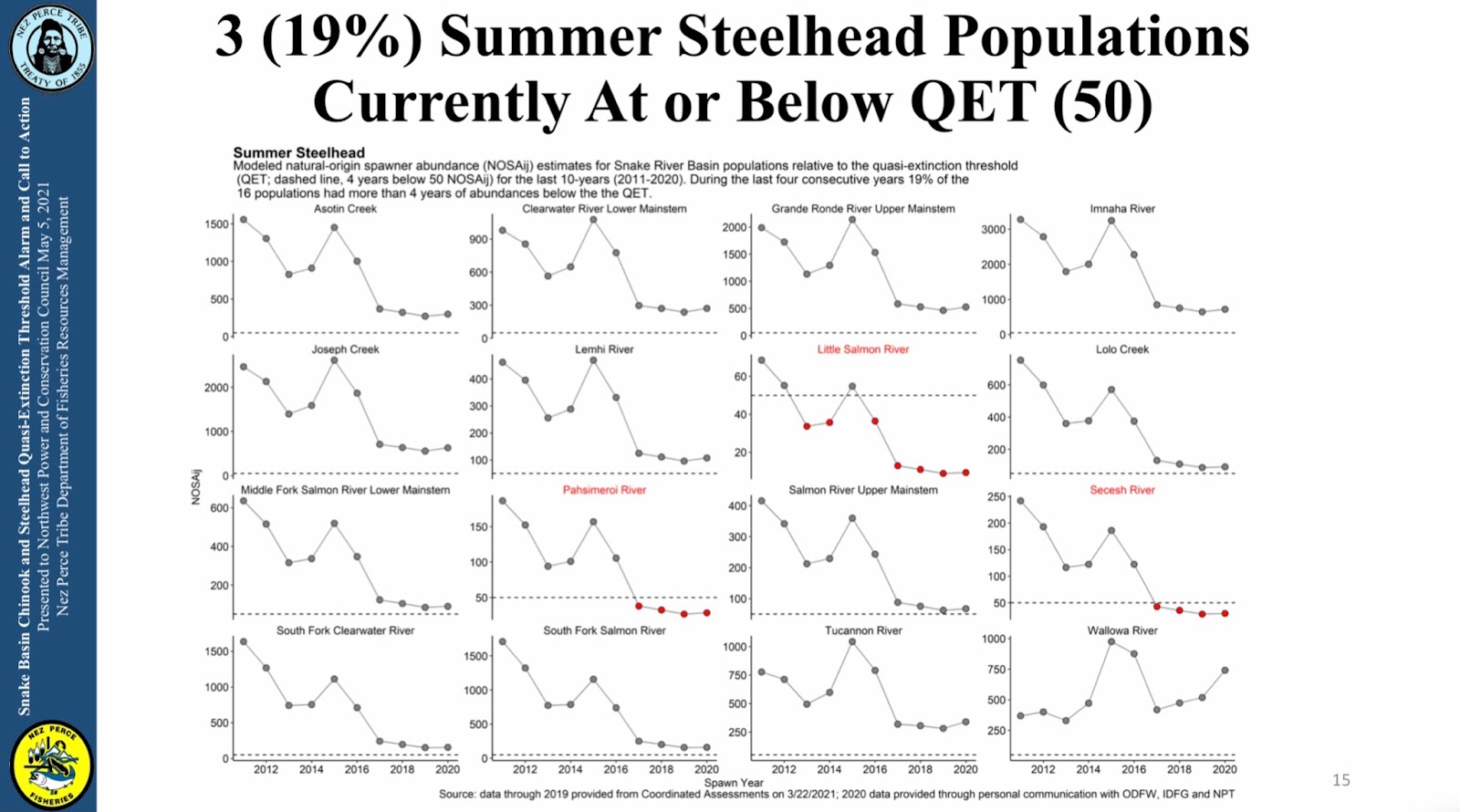 Similar to the analysis above, for the Summer Steelhead populations, these graphs reflect the numbers of spawners in all 16 populations, for which there was data, of the 25 listed under the Endangered Species Act in the Snake River Basin. The department modeled the natural-origin spawner abundance estimates for Snake River Basin populations relative to the QET for the last 10-years (2011-2020).4 During the last four consecutive years, 3 (19%) of the 16 populations had more than 4 years of abundances below the QET.4 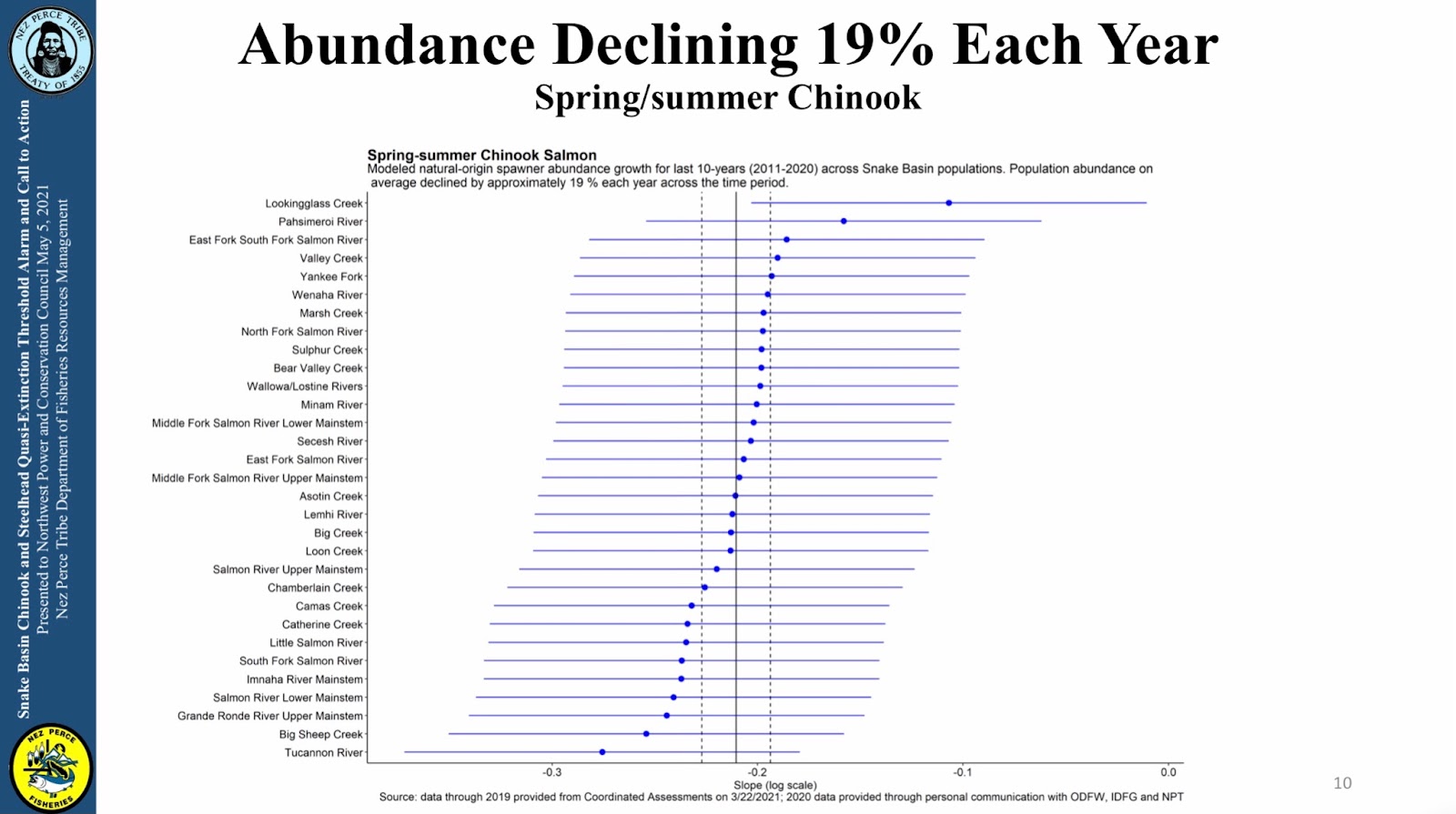 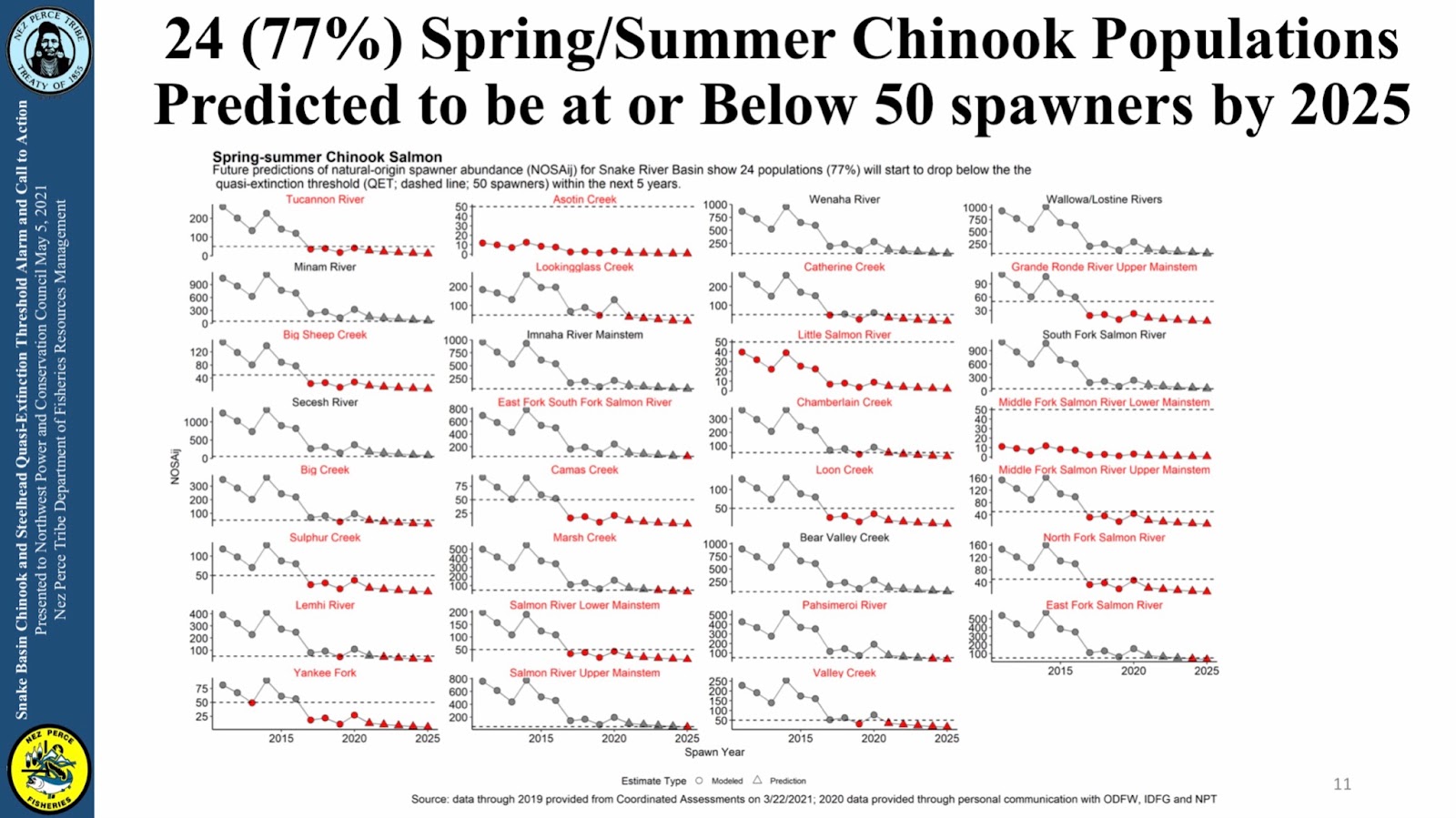 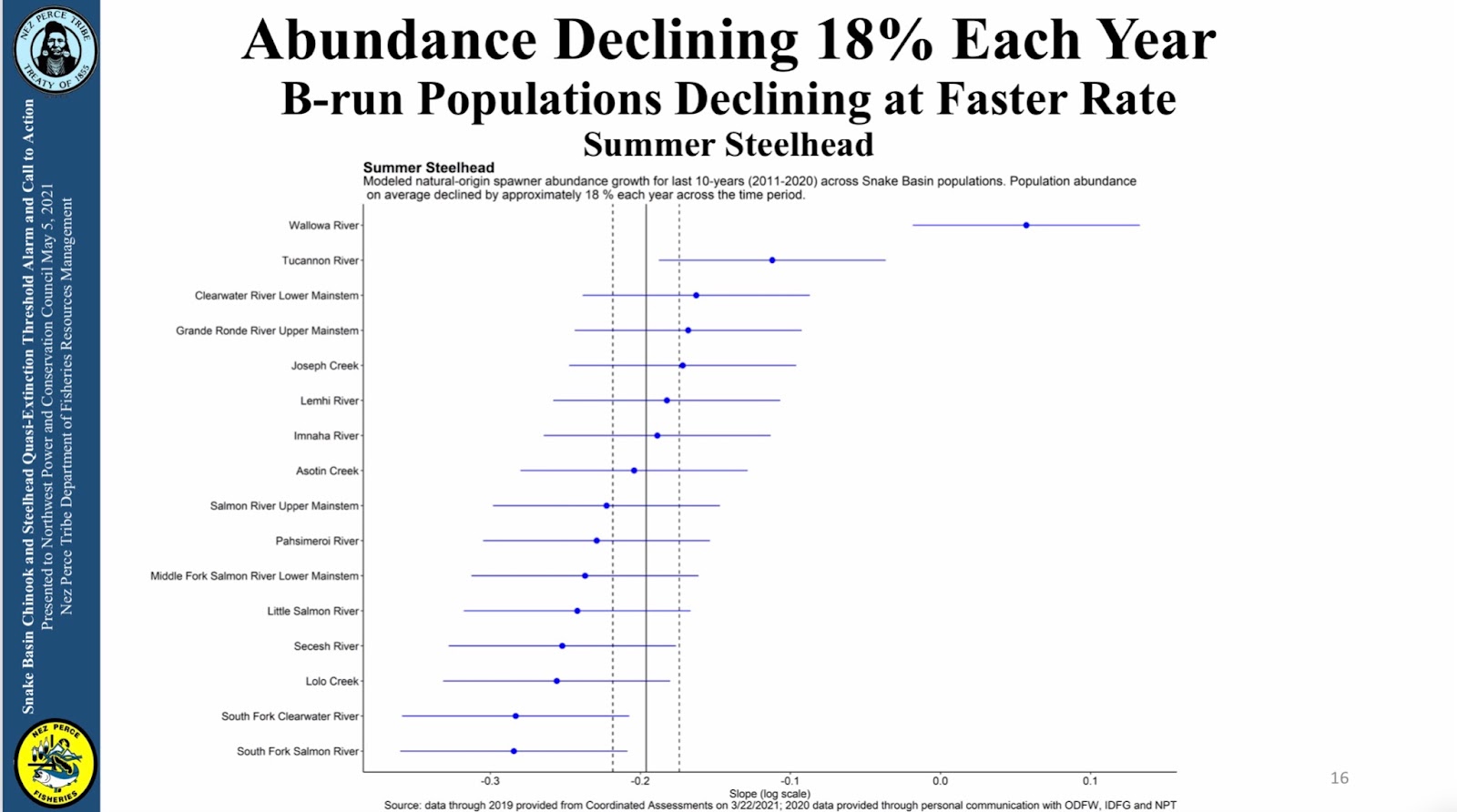 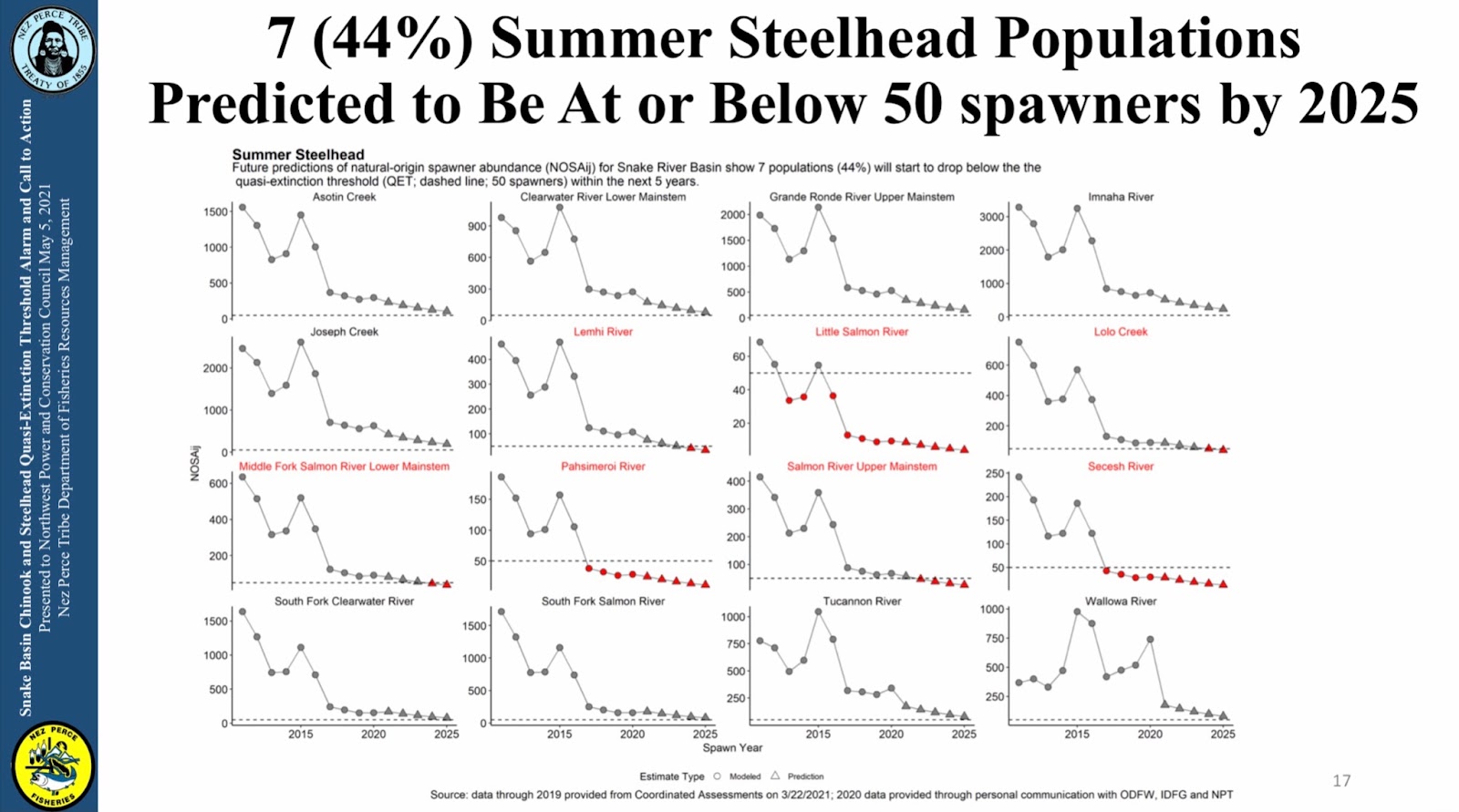 The Snake and Columbia River Basin contains the best available habitat for salmon populations to recover to any significant level of abundance. However, with predictions pushing the populations below 50 spawners, the four Snake River dams are a major factor preventing salmon from reaching spawning grounds. They also kill significant numbers of juvenile (smolts) and adult fish, as the dam’s reservoirs create large, stagnant pools that absorb heat from the sun, reaching lethal temperatures for salmon. Notably, they also support large populations of predatory fish such as bass and pikeminnow that eat out-migrating smolts.

In his presentation at last week’s ‘Salmon Orca Summit,’ Dave Johnson stated, “We are going through some big problems now. It’s been 100 plus degrees in the Snake River Basin. There are really hot temperatures, and the flows are down to 60% of what they should be, so it’s very hot and dry conditions out there for the fish. And with the stochastic risks, the demographic risks that fish face right now, you got one bad year like this...you don’t have any fish left.”5

The department ends its analysis with a series of recommended actions, including “improving survival at multiple life stages needed and seeking actions sufficient to address the current crisis and help salmon thrive,” such as the Rep. Simpson’s Columbia Basin Initiative.4

For more information about Rep. Simpson’s Columbia Basin Initiative and the regional conversation that he’s triggered with it, please visit SOS’ Urgency and Opportunity Resource Page.