Welcome to the Hot Water Report, Week 8. This weekly report during Summer 2019 will present conditions - including water temperatures and status of salmon and steelhead returns - on the lower Snake and Columbia rivers via graphs, analyses, and stories. The harmful effects on struggling fish populations caused by federal dams and their reservoirs is now being exacerbated due to our warming, changing climate.

Each week’s report gives a real-time update on water temperatures in the lower Snake and Columbia River reservoirs, the highest weekly temperature in each reservoir, and the status of adult returns for different species as they make their way back toward their natal spawning grounds. We’ll hear from scientists, fishers, guides, and salmon advocates about challenges facing the Columbia and Snake rivers - and the opportunities to improve their health and begin to rebuild healthy, resilient fish populations and the many benefits they deliver to Northwest culture, economy and ecology.

The daily mean temperature at the forebay - the upstream side of each dam - is represented with solid lines, while the 10-year average (2009-2019) for each reservoir is represented by the dashed line of the same color. For this initial report, 10-year historic data was only available for 4 of the 8 dams we will be monitoring. Finally, the dotted line across the top of the graph represents the upper end of the 68° F “comfort zone” for juvenile and adult salmon. 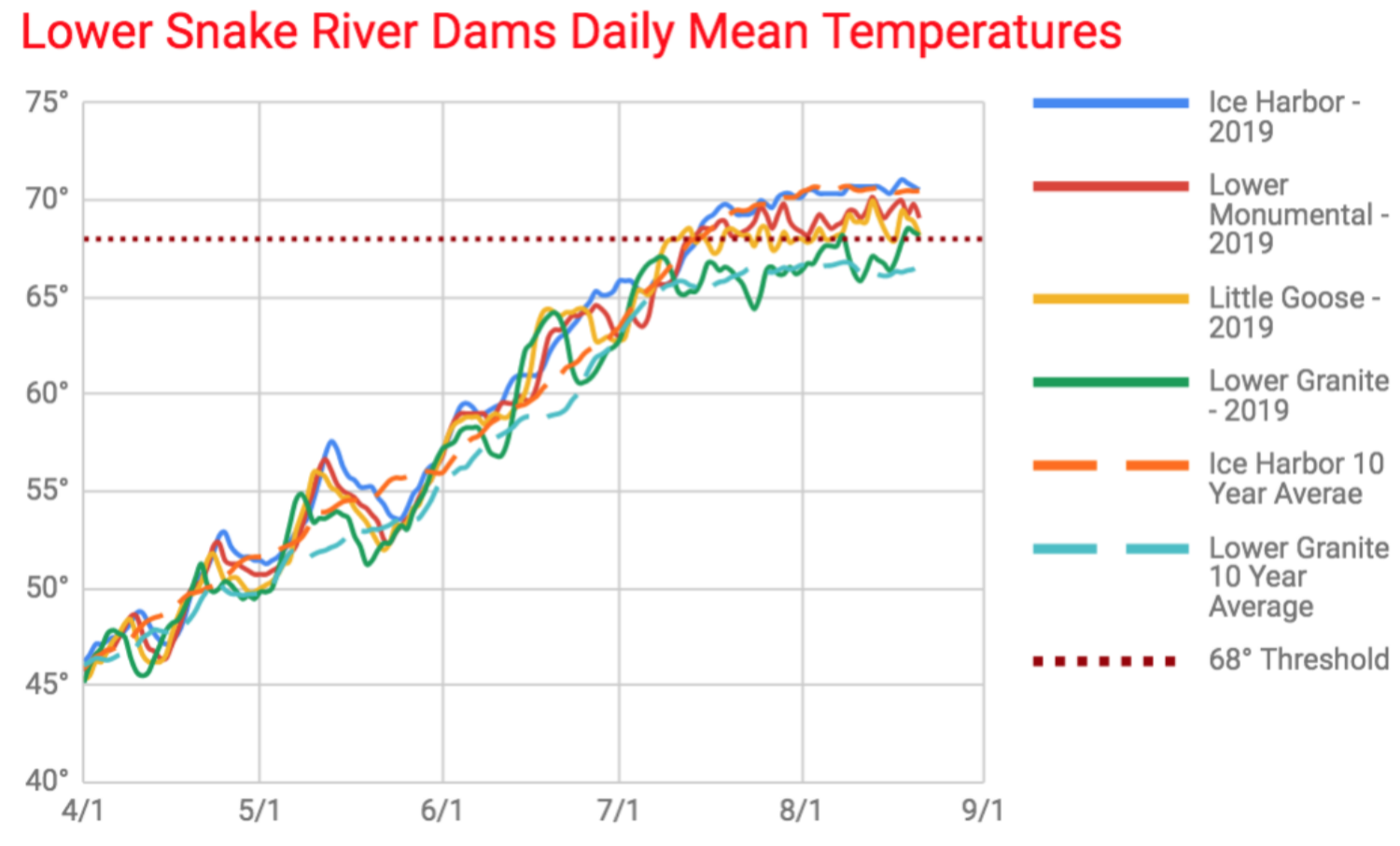 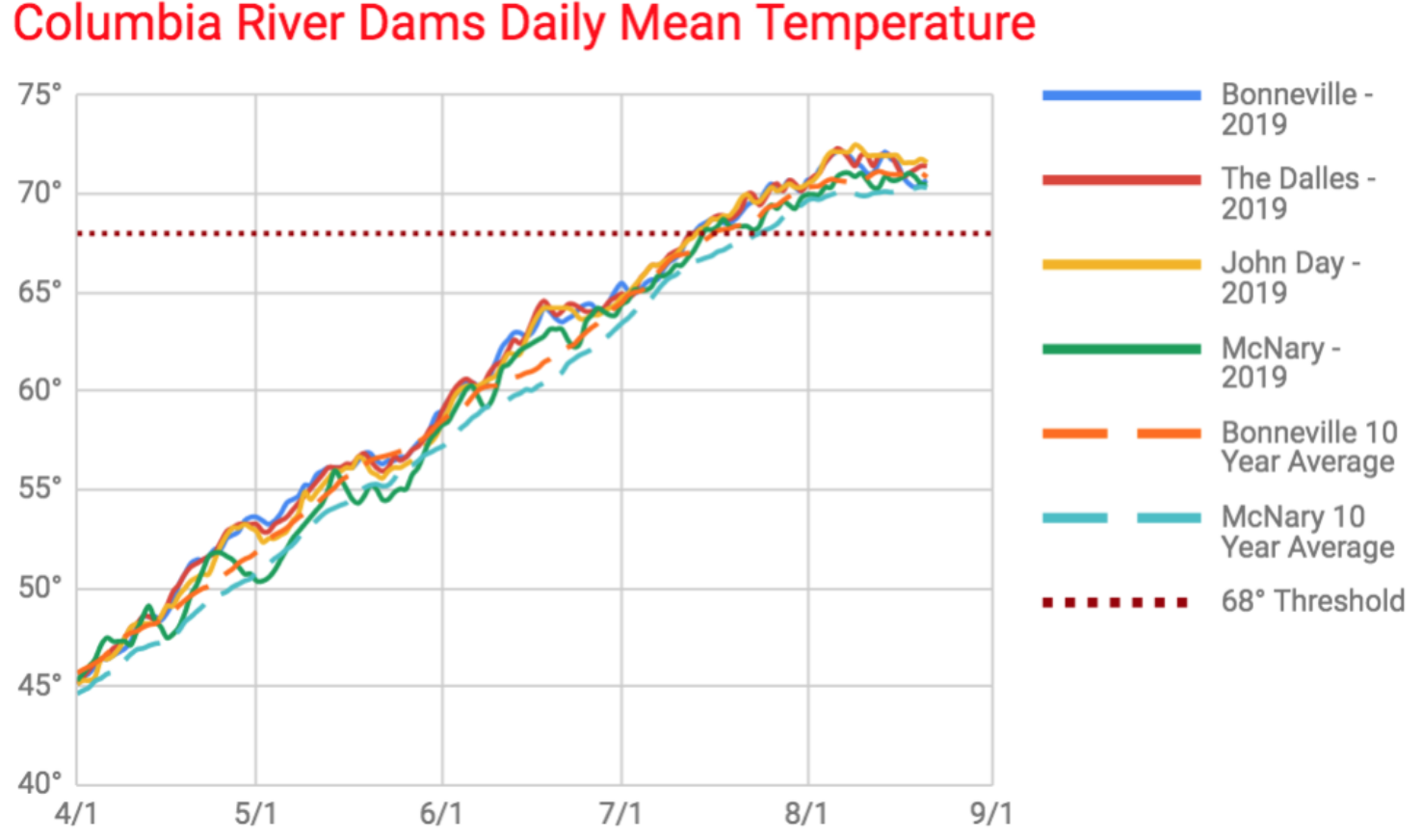 Temperatures on the Columbia River have also begun to level off and converge around 71.5°, 3.5° above safe temperatures for salmon. 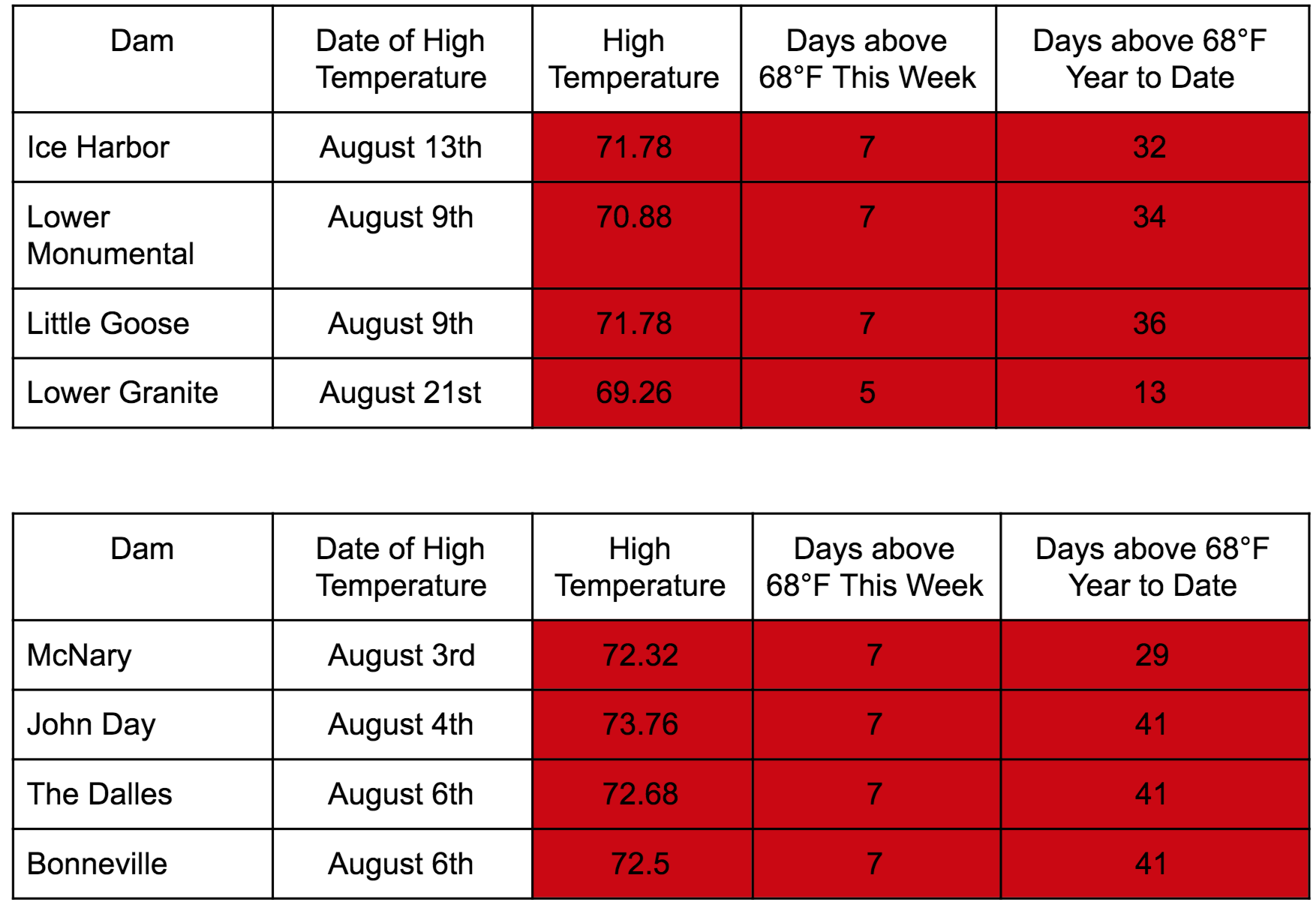 With the exception of Lower Granite on the lower Snake, none of the other reservoir temperatures this week have beat their “record high” for this year, although they did all spend the entire week well outside of the temperature range that is considered safe for salmon and steelhead. At this point, all of these reservoirs have spent 4 weeks almost consecutively above 68°F. And remember, the longer and higher that temperatures remain above this level, the more the negative impacts accumulate for salmon and steelhead that are in the river at these times. 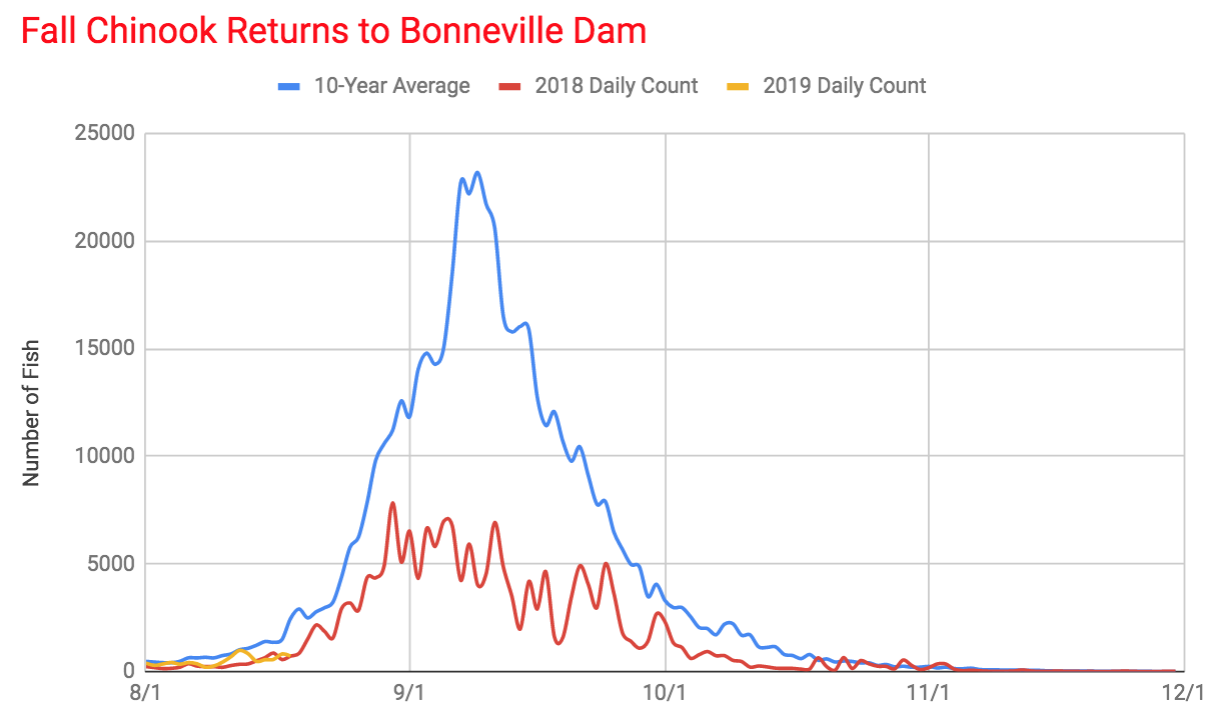 After August 1st, all chinook that pass into the Columbia-Snake river system are designated as part of the fall chinook run. We are just beginning to see these salmon cross over Bonneville dam. There have not yet been sufficient returns to Lower Granite dam to display in a graph, as the run just began.

It is still early in the season for these fish, but pre-season estimates for these stocks are low. Projections for fall chinook returning to the Columbia and Snake Rivers in 2019 are just 350,000 - 67% of what have returned on average over the last 10 years. The vast majority of these will return to the Columbia River rather than the Snake. So far, returns are tracking more closely to 2018’s dismal numbers than to the 10-year averages. We’ll need more time and information before we know how this year’s actual fall chinook return.

THE COLUMBIA-SNAKE SALMON NEPA REVIEW: Illegal Dam Operations and the environmental review now under way. Is the fix already in?

Over the past two decades, the federal government has produced five consecutive plans under the Endangered Species Act that are supposed to ensure salmon-safe dam operations in the the Columbia-Snake River Basin. Federal judges, however, have invalidated all five plans as inadequate and illegal. The most recent plan was rejected in 2016. The judge determined that the federal agencies’ (BPA, ACOE) plan violated the law (ESA and NEPA) in numerous ways, and he ordered them to produce a new plan and to complete a new comprehensive environmental impact statement (EIS) by 2021 (see issue 6 for more detail) that examines all credible salmon recovery alternatives, including the removal of the four lower Snake River dams.

Salmon and fishing advocates were initially encouraged by this court order. The development of an up-to-date environmental review represented a huge opportunity to inform a new, legally-valid, science-based plan that truly and finally protects healthy salmon and steelhead populations in the Columbia and Snake rivers. Done well, this review could drive and inform a much-needed dialogue among policymakers, stakeholders and the public about the needs of salmon, orca and Northwest communities. With salmon returns in recent years in steady decline (2019 returns are among the lowest on record and three orca deaths occurred earlier this summer), there is no time to waste.

The Northwest urgently needs an effective, lawful plan that protects endangered salmon and orcas and invests in affected communities. The federal agencies could have seized this opportunity - and conducted a full and fair environmental review and laid the foundation for a lawful, science-based plan that truly works for salmon, orcas, and communities. But that is not what it appears they are doing.

Unfortunately, the evidence today indicates that the agencies are doing all they can to produce another failed, costly, risky and illegal status quo plan that will perpetuate conflict, increase costs and uncertainty for communities, and push salmon and orca ever closer to extinction.

If salmon advocates’ fears are realized, this court-ordered NEPA review will be one more painful missed opportunity for critically endangered salmon and orcas, and for the people of the Northwest and the nation. Increasingly, the focus must turn to the region’s elected officials and other policymakers whose engagement and leadership working with each other, with stakeholders and with the public is needed to finally craft an effective plan that protects salmon and the benefits they bring to the Northwest in a manner that also invests in affected communities and brings everyone forward together.