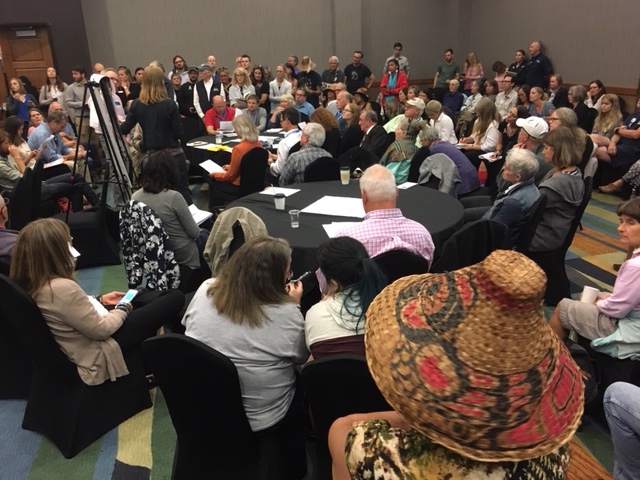 This fall, Governor Inslee began an important project in Washington State to interview stakeholders and gather information about the lower Snake River dams, salmon and communities to better understand people’s perspectives and to identify the kinds of transitions that will be needed if/when we remove the four lower Snake River dams.

Scientists have told us for many years that restoring the lower Snake River by removing its dams is essential in order to protect and rebuild its endangered salmon and steelhead populations, help feed starving orcas, and restore the benefits these native fish deliver to people and ecosystems across the Northwest. With thousands of miles of pristine, protected habitat upstream from these dams, this is our nation’s very best river/salmon restoration opportunity anywhere on the West Coast today.

Washington State is sponsoring a conversation about restoring the lower Snake River and its salmon by removing its four federal dams. This is a critical opportunity to learn more about this issue and ensure your voice is heard!

Here’s what’s happening in December and January - and how to get more involved:

(1) Fill out the Stakeholder Process Questionnaire: An online questionnaire asks questions and seeks comments about the lower Snake River and its roles and importance for salmon recovery and communities. Comment deadline: Jan. 24 at 5:00 pm.

(2) Submit your comments on the Draft Report (coming soon): In mid-December, Governor Inslee’s team will release a draft report based on interviews and fact-finding and seek public comment about it. Comment deadline: TBA.

(3) Attend a public workshop in Clarkston (Jan. 7), Vancouver (Jan. 9) and Tri-Cities (Jan. 13). The Governor’s office is hosting three public workshops in early January to present the draft report, hear from select stakeholders, and encourage citizen dialogue on these important issues.

Tri-City Herald: Republicans, outraged by no dam-breaching session in Tri-Cities, get their way - After complaints and demands by Republican leaders, the Tri-Cities will get its own workshop on a state study on the impacts of breaching the lower Snake River dams (Nov. 17, 2019).