1.   A Year-end Fundraising Update:
First, we want to thank all of you that were able to generously contribute to support our work in the new year. We had a very active, successful 2016. With your generosity in December, we’re now better prepared to carry that momentum into 2017. Congress and the incoming administration are sure to present big challenges. And we’re ready to work with our partners and allies regionally and nationally to protect wild salmon, wild rivers, and wild places – and the many communities that rely on them.

As you may recall, we announced a $7500 1:1 match on Dec. 26 - thanks to a donor/supporter from Portland, Oregon. We’re happy to report that we more than met the match. Thank you to all who helped us seize this opportunity - and double your money. 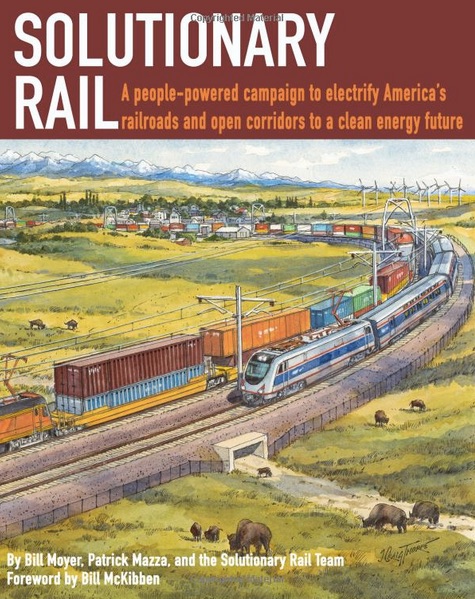 We also want to announce our 2016 Year-end raffle winners! Our raffle prizes this year: Three copies of Solutionary Rail – written by Bill Moyer and Patrick Mazza, recently published by the Backbone Campaign, and with a forward by renowned climate activist Bill McKibben. These copies are signed by co-author and BBC executive director Bill Moyer. Solutionary Rail explores how electrifying and expanding our nation’s rail transport system presents a series of interconnected solutions and opportunities for shipping goods, moving people, attacking climate change, and - in the Northwest – can be part of the solution to protect wild salmon and restore healthy rivers!

Congratulations! Thank you again. And look for your book in the mail later this month.

Finally – if you have ordered a shirt/hat/poster with your SOS donation last month, but have not yet received it, do not despair. We’ll be working on fulfillment through the month of January. And if you ordered a t-shirt, but have not sent me your size – please do so ASAP: joseph@wildsalmon.org

2.   Update on the court-ordered NEPA Review for Columbia/Snake salmon and dams 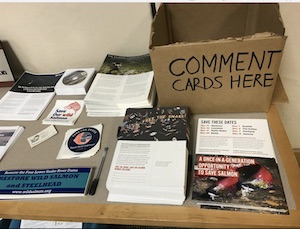 First, thanks to all of you who have submitted your comments, attended a rally for wild salmon and a free-flowing Snake, written a letter-to-the-editor, contacted your elected officials, educated your friends and family, or otherwise have helped to build awareness and support for restoring wild salmon and healthy rivers.

Second, more than 30 organizations and business associations sent a letter to the so-called Action Agencies (InAction Agencies perhaps?) last fall seeking a vastly improved public meeting format, an extended comment deadline, and additional meetings to better allow participation and representation of fishing communities along the West Coast from California to Alaska whose jobs and livelihoods depend on these foot-dragging agencies finally getting it right!

Well, we just got word that the agencies have decided to extend the comment deadline...by just three weeks. We had asked for 60 additional days to better ensure that people have sufficient time to understand the issues and provide their input.

Additional meetings on the coast to better allow fishermen to participate? Not one. Fifteen of sixteen meetings hosted by the feds have occurred far from the coast. Just one – in Astoria (OR) will occur on the coast, in a single fishing community. (It has been rescheduled for 1/9 – join us if you have to be in the area on the 9th – contact joseph@wildsalmon.org for details).

The dam agencies in the Northwest just don't seem to get it!

View a GALLERY OF PHOTOS from our rallies and public meetings this fall.

How can you help now?
-- SUBMIT YOUR COMMENTS before 2/9 in support of wild salmon and healthy rivers. So far, more than 250,000 salmon and river and orca and taxpayer advocates have delivered their comments to the Action Agencies supporting meaningful, cost-effective salmon restoration that includes the removal of the four costly dams on the lower Snake River. Make you’re your voice is heard! Let's double this number!

-- SPREAD THE ACTION LINK widely – to your friends, family, colleagues, and networks via email and social media.

-- CONTACT YOUR ELECTED OFFICIALS – ask them to support wild salmon, healthy orcas, freely-flowing rivers – and to insist (and verify) that the agencies are honest and transparent, and fully and fairly consider all recovery options including lower Snake River dam removal.

2016 was a devastating year for the Southern Resident Killer Whales of the Pacific Northwest. Six orcas from the J-pod and L-pod died in 2016; two very recently. J-34, an adolescent male, was recently found on the coast of British Columbia. His necropsy suggest the 18-year old male orca died of blunt force trauma caused by a boat. We’re awaiting the release of further details in the weeks ahead.

On Tuesday, January 3, the Center for Whale Research announced its determination that Granny, the oldest known orca on the planet and matriarch for the SRKWs, had died. She’s not been seen for several months. Granny was thought to be more than 105 years old. 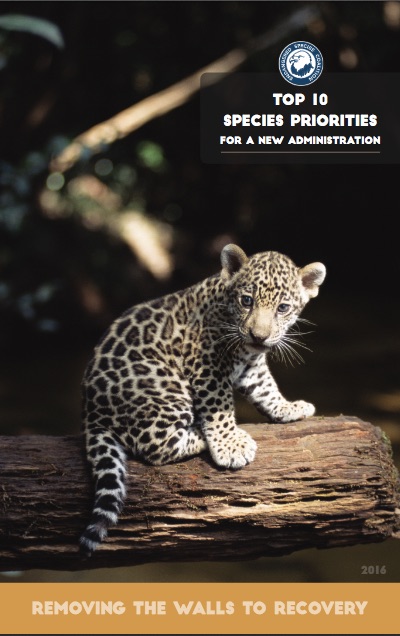 In December the Endangered Species Coalition (ESC) released its annual "Top Ten List" of imperiled species in need of greater protections to halt their decline and restore populations.

Removing the Walls to Recovery: Top 10 Species Priorities for a New Administration included the Snake River's endangered spring/summer chinook salmon, which migrate hundreds of miles from the ocean to the many river tributaries in the Snake basin.  This report highlights the need for lower Snake dam removal to restore salmon populations, a vital food source for Puget Sound orcas, and increasingly threatened by the impacts of climate change.

“We nominated Snake River chinook for this report because with climate change, these four money-losing dams become deadlier each summer, when reservoir water temperatures become lethally hot, causing fish kills” said Save Our Wild Salmon Inland Northwest Director Sam Mace.  “But if we free the Snake River of these dams, wild salmon will once again access thousands of miles of pristine, high-elevation habitat that can provide an ark for salmon in a warming world.”

Snake River chinook salmon are among the longest and highest-migrating salmon on the planet – some swimming nearly 1,000 miles upstream and climbing more than 6,000 feet in elevation to reach their spawning grounds. More than 130 other species depend upon salmon, including ESA-endangered orcas.

“Since Northwest rivers began to flow, a population of orcas known as the Southern Residents have relied on Columbia basin salmon to sustain them.  Spring chinook that spawn in the Snake River basin are especially critical for survival of this unique and now endangered orca community.  Unfortunately, the lower Snake River dams have decimated this critical food source.  The impact these dams have on this precious, but dwindling, population of orcas, must be addressed.” said Howard Garrett, Board President of Orca Network.

Mark your calendars: the 3rd annual Free the Snake Flotilla has been set for Saturday, September 9.th. More than 350 people took to the water in a wide variety of watercraft last year—kayaks, traditional tribal canoes, rafts, dories and pontoons--for a fun community paddle on the lower Snake in support of removing four outdated dams.

Exact location and details of this year’s paddle are still to be determined, as are associated events. But it’s guaranteed to be an inspiring day on the water.

Please contact Sam Mace at sam@wildsalmon.org or if you want to be added to the email list for event updates, if your organization or business would like to be sponsor, or you would like to help out.  And check out www.freethesnake.com in late winter for additional details.

6.   Salmon Mean Business! A Chinook-sized “thank you” to these businesses for their support for SOS