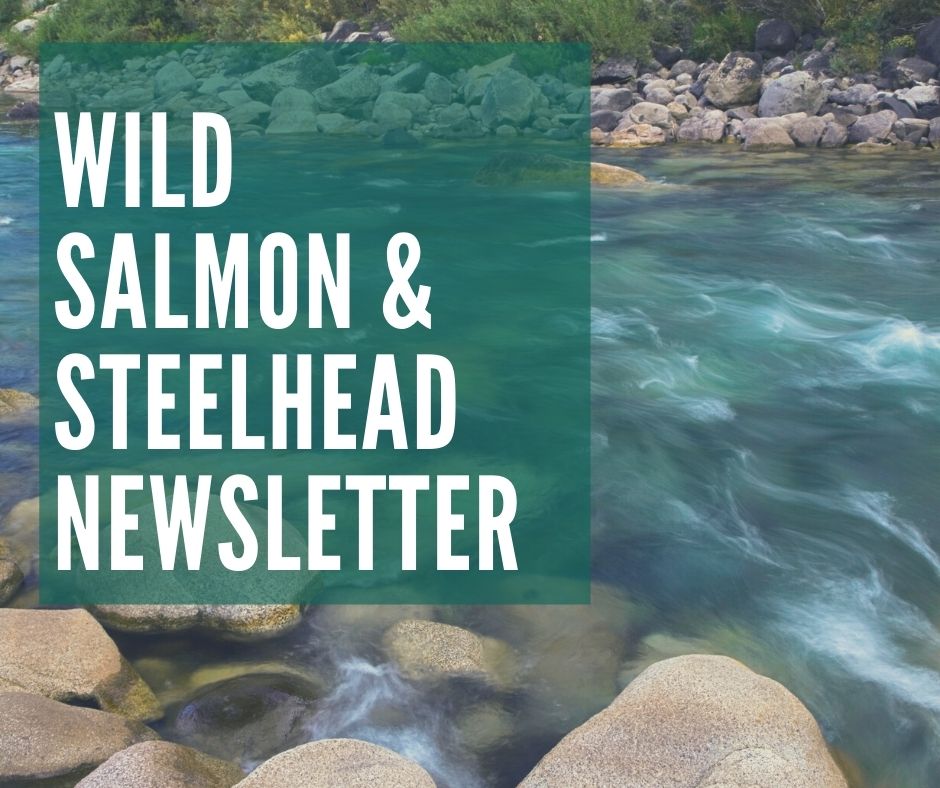 Wild Salmon & Steelhead News is published monthly by the Save Our wild Salmon Coalition. Read on to learn about the Columbia-Snake River Basin’s endangered wild salmon and steelhead, the many benefits they deliver to people and ecosystems, and the extinction crisis they face today. Find out how SOS is helping lead efforts to restore health, connectivity, and resilience to the rivers and streams salmon depend upon in the Columbia-Snake Basin and how you can get involved to help restore healthy, abundant, and fishable populations and sustain more just and prosperous communities. To learn more and/or get involved, contact Carrie Herrman.

1. Hundreds Rally for the River on August 7 - call for leadership and urgent action 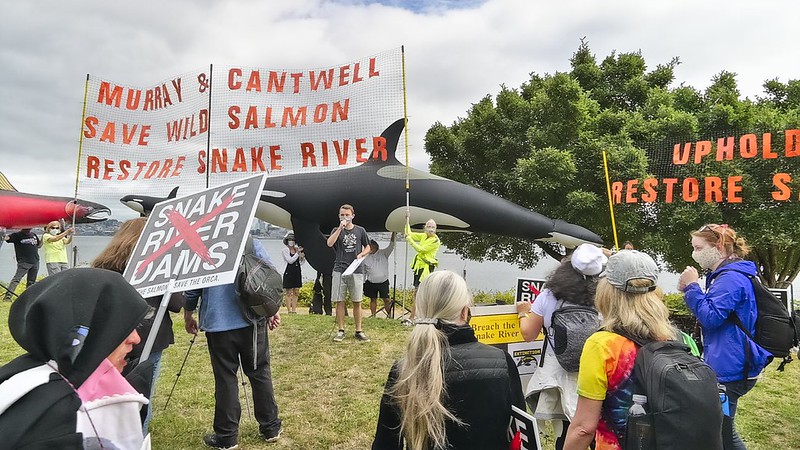 On Saturday August 7th salmon, steelhead, orca and river advocates and allies from all over the Pacific Northwest came together to host a series of Rallies for the River to demonstrate strong public support for salmon recovery and the restoration of a freely flowing lower Snake River by removing its four costly dams. Across the region, people called on Northwest governors and members of Congress to bring the people of the region together to develop a comprehensive plan that restores salmon in the Snake River and beyond, helps feed hungry endangered orcas and invests in communities and critical infrastructure.

The rallies were held in six different locations: Seattle, Spokane, Portland, Eugene, Corvallis, and Boise hosted by the Association of Northwest Steelheaders, the Whale and Dolphin Conservation, Endangered Species Coalition, Save Our wild Salmon, and the Idaho Conservation League. To read news coverage of these events and see photos, visit our Rally for the River webpage. 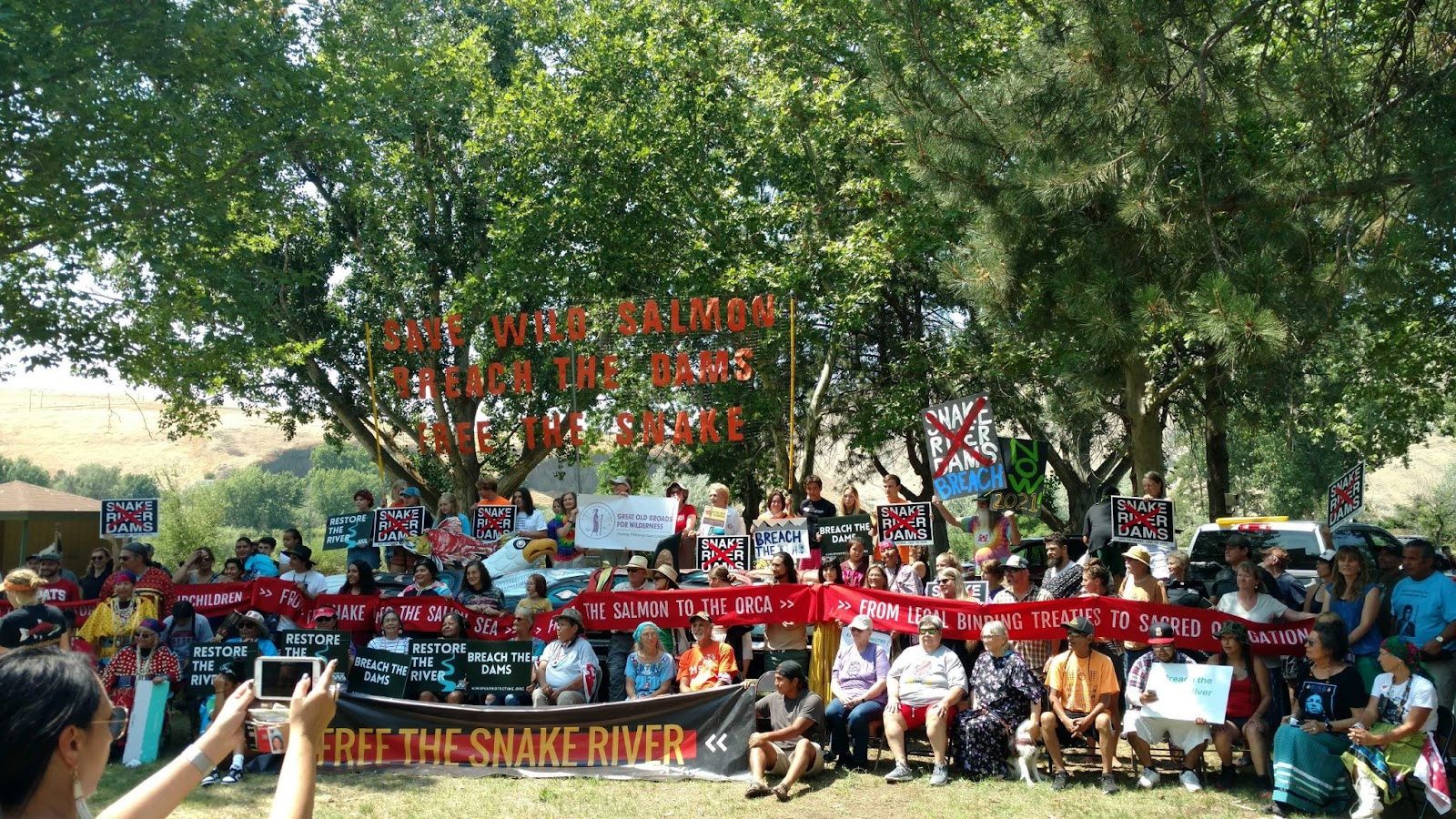 As July came to an end, so did the two-week, 20,000 mile totem pole journey that was the Red Road to D.C. organized by the House of Tears Carvers, Native Organizers Alliance, The Natural History Museum, Se'Si'Le, and IllumiNative. The journey made stops for seventeen blessing ceremonies across the nation, at sites of cultural importance to tribes who are at the forefront of a fight to protect threatened ancestral lands, waters, tribal sovereignty, and treaty rights.

The first stop on this historic journey was on the banks of lower Snake River - hosted by Nimiipuu Protecting the Environment. The event centered around tribal-led efforts to restore critically endangered salmon and steelhead populations to their traditional spawning grounds by restoring a freely flowing lower Snake River. People came together from around the Northwest to acknowledge the steep decline of these species and to stand in solidarity with the tribes who’ve been fighting for dam removal for several generations. At each stop along the way the Red Road to D.C. connected people and communities like this to highlight the need to protect endangered sacred places, waters and species.

After concluding it’s journey and being presented to the U.S. Secretary of the Interior Debra Haaland on the National Mall, the totem pole found it’s resting place on public display in front of the Department of the Interior in Washington, DC.. There is also a display, viewable all summer long, at the Smithsonian National Museum of the American Indian - 'Kwel' Hoy: We Draw the Line' - about the Lummi totem pole journey for all those able to check it out! To learn more about the Totem pole journey visit Red Road website.

SOS and Defenders of Wildlife partnered up earlier this year to launch an interactive website as part of the Snake River Vision Project. This is a project SOS launched in 2020 in order to reimagine what a free-flowing lower Snake River could mean for the people, waters and lands of the Inland Northwest, including the recreation economic and environmental benefits it will provide to local communities and the region. Since its release, the Vision Project has been endorsed by many local conservation and recreation groups.

The interactive map highlights historical photos of the canyons, wildlife habitat, small towns and undammed river that were lost to reservoirs when the dams were constructed. It also imagines what a free-flowing river corridor could look like, including the 14,000+ acres of currently inundated riparian and bottom lands that will be recovered when the dams are breached and the river restored. Historically, these lands supported rich agriculture, abundant bird and wildlife populations, as well as boating, hunting fishing and outdoor recreation. They also include many sites of great cultural and historical significance to a number of Northwest tribes.

SOS began engaging Inland NW residents a decade ago by building a collection of beautiful historical photos that reminded people what had been lost under the reservoirs. While there are many older residents who remember the sandy beaches, phenomenal fishing and hunting, picking fruit in orchards, and boating, with the last dam built in 1975, most people have no memories of what was - and what could be again.

When Idaho Congressman Mike Simpson released his Columbia Basin Initiative earlier this year, a bold proposal to remove the lower Snake River dams, replace their benefits with modern alternatives and invest in the region, it ignited new interest in looking at what a restored river corridor could provide to people, wildlife and communities. Simpson offered up his own idea: create a new National Recreation Area along the river, with investments in recreation infrastructure, tourism promotion and cultural resource protection. This would be a boon to the people of the Inland Northwest and many communities near the river.

What would you like to see as part of a newly restored river? What values are important to you? The SRVP map provides an opportunity to share feedback and sign up for regular updates. The map will soon be expanded with more content, personal stories and information. Stay tuned!

For more information and to get involved, contact Sam Mace at sam@wildsalmon.org

4. Thanks to Upper Columbia River tribes - after 111 years - salmon return to the Little Spokane River. 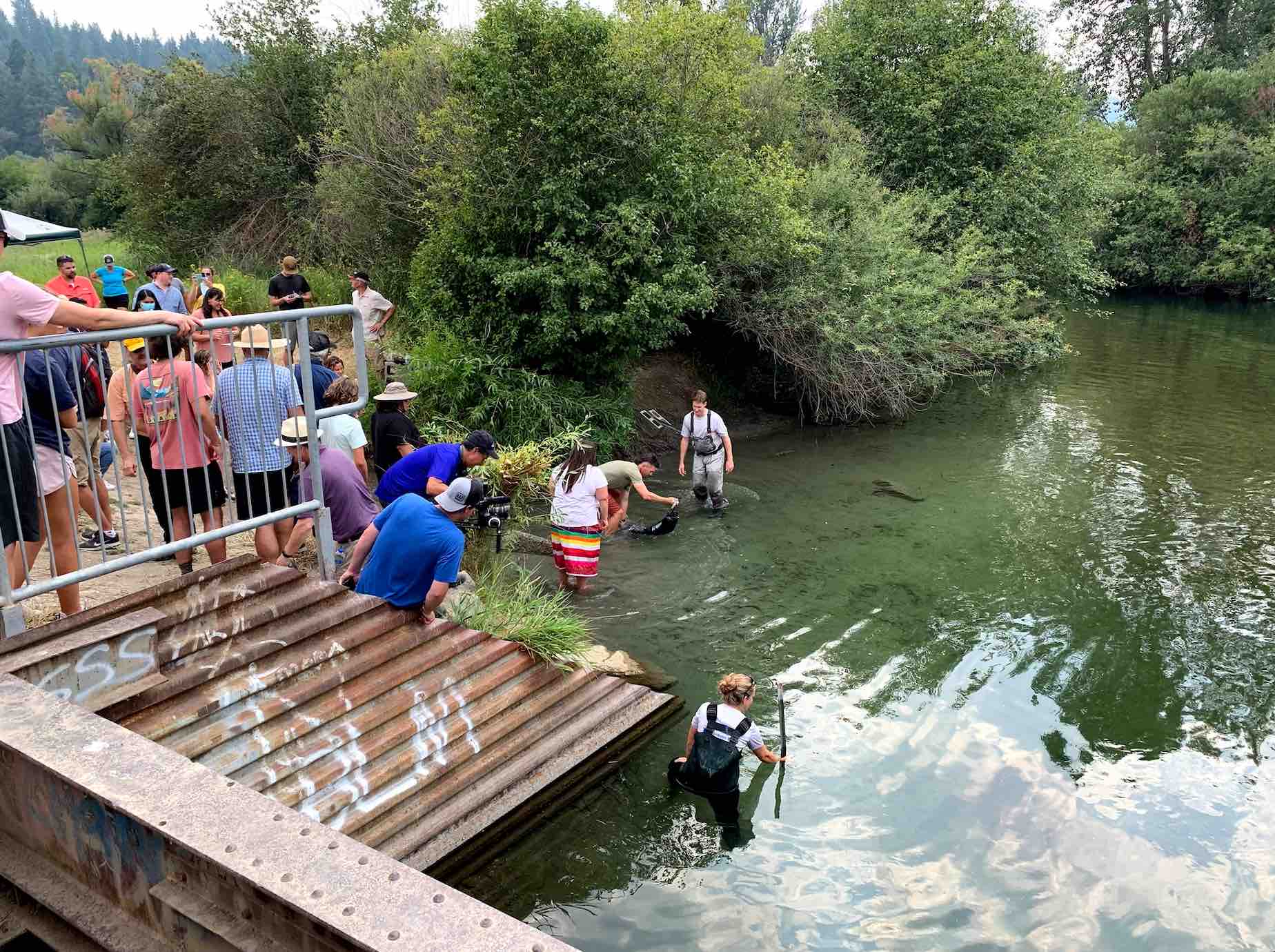 For the first time in more than a century, salmon are swimming in the Little Spokane River, a tributary of the Spokane River in northeast Washington State.

On August 6th, the Spokane Tribe released 51 adult Summer Chinook into the river, with support from Washington Department of Fish and Wildlife and the Inland Northwest Land Conservancy.

The Spokane River and its tributaries once supported abundant salmon runs, including the famous “June Hogs" - chinook salmon that reached more than 100 pounds. The construction of Little Falls dam on the Spokane, followed by the construction of Grand Coulee and Chief Joseph dams on the Columbia completely blocked salmon from accessing their ancestral spawning and rearing grounds in the upper Columbia River Basin, a devastating loss to Tribes.

The Spokane Tribe held a moving ceremony to honor this historic release and reintroduction, which was attended by Tribal members, agency staff, conservationists and the public at large. There was much to celebrate.

In addition to being a cultural milestone for the Tribe, the salmon release is also part of a large-scale effort to reintroduce salmon back into the Upper Columbia and secure fish passage over the dams. Tribal biologists will monitor the fish, observe where they spawn and the habitat they use. This data collection will be used to help guide the multi-year effort for bringing salmon back to thousands of miles of river habitat blocked to them for more than a century.

Idaho Rep. Mike Simpson’s Columbia Basin Initiative includes funding for restoring salmon to blocked areas in the Upper Columbia as well as elsewhere in the Basin in addition to restoring salmon through removing the four lower Snake River dams.

Read more:
The Spokesman: It’s been over a century, but salmon are back but summer chinook are back in the Little Spokane River: ‘It’s kind of a spiritual experience’ (August 11)

5. Southern Resident orca - K21 - has disappeared and is presumed dead. 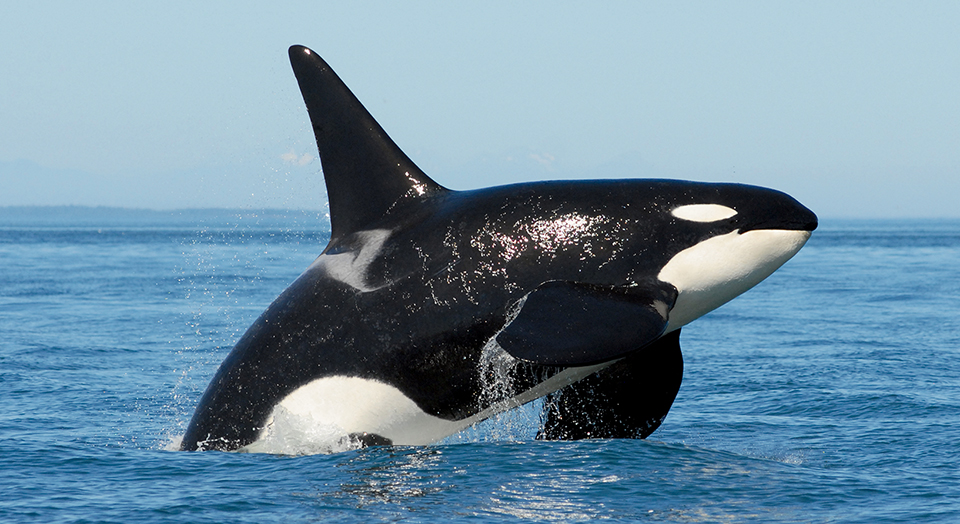 K21, also known as Cappuccino, was last seen July 28 near Race Rocks in the Strait of Juan de Fuca in the coastal waters between Washington State and Vancouver Island, B.C. K21 was in poor body condition, emaciated and with a fully collapsed dorsal fin.

According to the Center for Whale Research, K21 had been the oldest male Southern Resident killer whale since the death of L41 in 2019. Born in 1986, K21 had one confirmed sibling, K46, and two probable siblings in females K40 and K17. K21’s mother, K18, died in 2004, and the last of his close maternal relatives, K40, died in 2012. Since the loss of his family, K21 has traveled with K16 and her son K35, together forming what became the most socially independent subgroup within K pod.

This death means that the critically endangered community of Southern Resident orcas now numbers just 74 individuals. They were listed for protection under the Endangered Species Act in 2005, though their numbers have continued to decline. Scientists attribute lack of prey as the leading cause of decline, in combination with toxins and boat noise. Rebuilding abundant chinook salmon populations, including in the Snake and Columbia rivers, is essential for protecting this population from extinction.

And here’s some related and more hopeful news:

On July 30, the National Oceanic and Atmospheric Administration announced that it is expanding designated critical habitat for endangered Southern resident killer whales. The dwindling population’s protection area will now include most coastal waters from Washington to Monterey Bay in California — formerly it encompassed only most of the inland waters of Washington. This new designation includes waters where we now know that the Southern residents hunt for salmon from West Coast Rivers and other marine species.

Notably, this expanded designation explicitly and properly recognizes the tremendous importance the coastal waters of Washington State, Oregon and California (including of course one of the places they spend a lot of time – near the mouth of the Columbia River) for the Southern Residents. These whales spend at least half of their time (and considerably more recently) cruising along the West Coast from B.C. to California and everywhere in between in search of big, rich chinook salmon, their favorite meal. 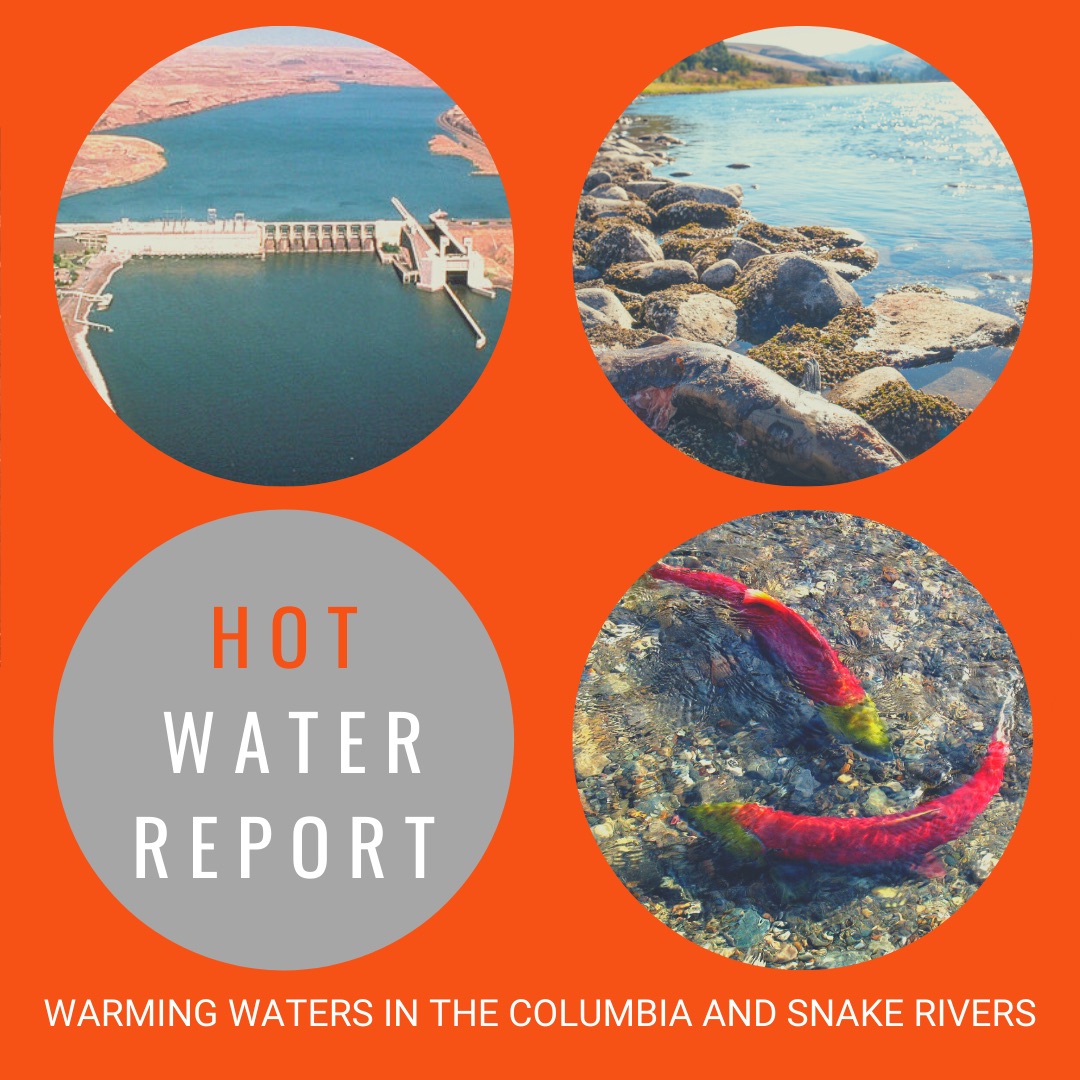 The hot, dry conditions of summer 2021 are jeopardizing the existence of endangered salmon and steelhead populations, and these conditions are forecasted to becoming increasingly common due to climate change. Recently, Columbia Riverkeeper released video footage and images showing sockeye salmon with large, open lesions and fungus caused by hot water conditions from the lower Snake and lower Columbia River reservoirs. Periods of prolonged hot water in the Columbia-Snake River reservoirs are lethal to these coldwater species. Restoring the lower Snake River will significantly help to address many of the problems these fish face today - high water temperatures, stagnant waters, increased predator populations, increased susceptibility to disease, and increased juvenile salmon migration times. Read our reports for an update on real-time water temperatures in the lower Snake and Columbia River reservoirs via graphs and analyses and a report on the highest weekly water temperature at the forebay/reservoir of each dam during this summer.

Each issue of the Hot Water Report also explores related issues and urgently needed solutions and the opportunities they can bring for Northwest communities, economy, and environment. Read our current featured articles in the report, which include, how hot water is devastating sockeye salmon returning to the Columbia and Snake Rivers, an in depth look at Snake River Wild Salmon and Steelhead returns, and a brief history and update from the Klamath River Basin located between California and Oregon. Follow us on Instagram, Facebook, and Twitter to read and share the Hot Water Reports to your networks!

7. Big thanks to Lyf Gildersleeve and Flying Fish in Portland, Oregon! 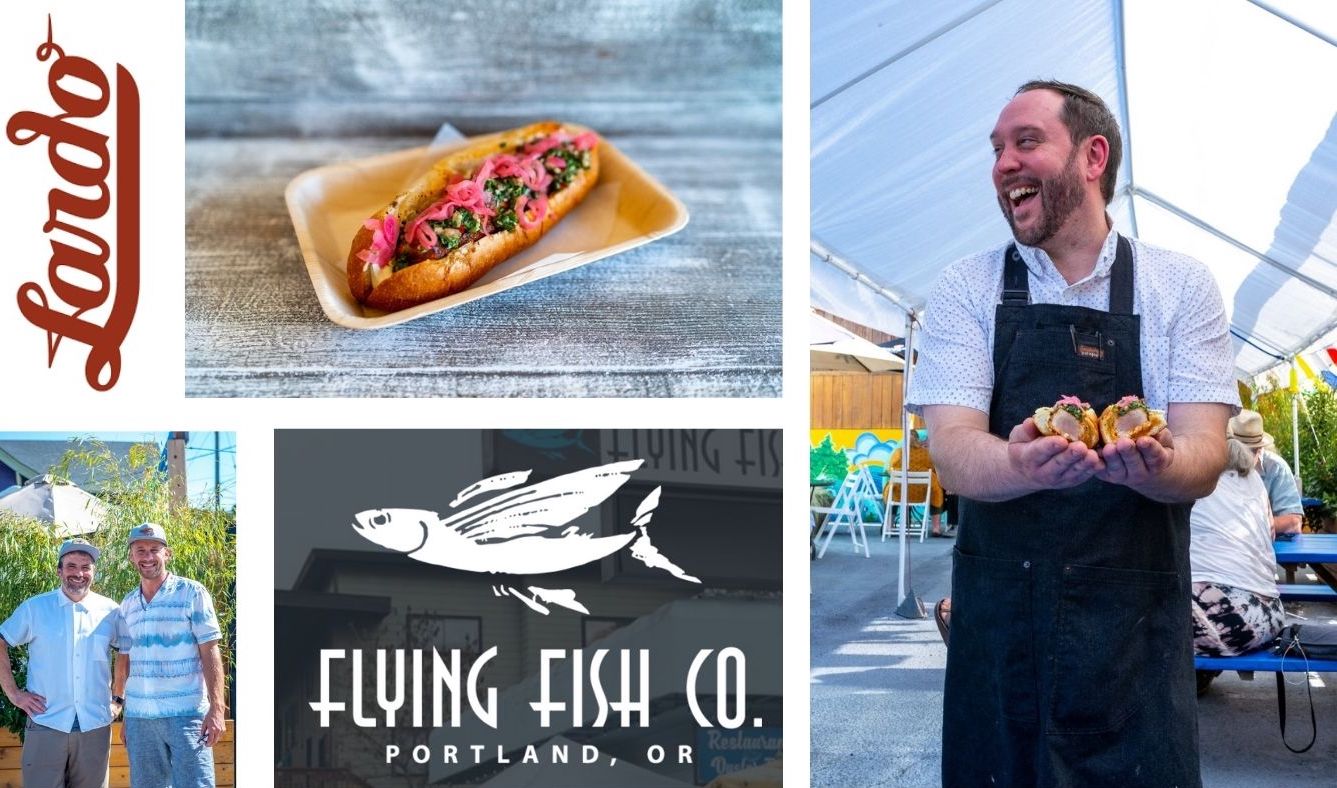 A big shout-out to Lyf Gildersleeve and his chef Erik Englund at Flying Fish in Portland, OR. This month, Flying Fish has teamed up with Lardo for an “August Chefwich”. It is a delicious fundraiser to support our work at Save Our wild Salmon. If you live in the Portland area, you can both eat well and support SOS – all month long!