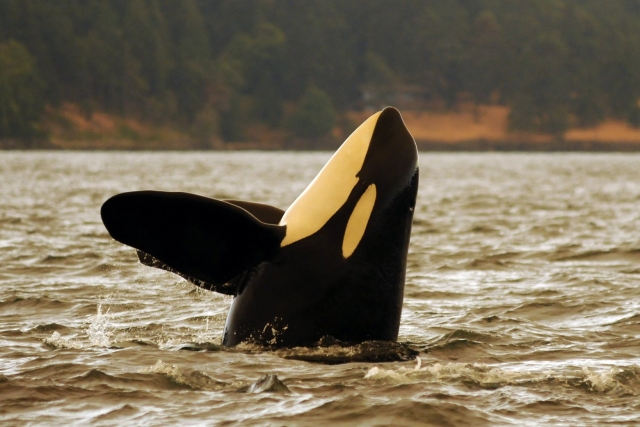 OLYMPIA, Wash. -- The state's southern resident killer whale task force handed its plan to save the endangered animals to the governor Friday.

The plan consists of 36 recommendations - decided after months of debate and compromise - that may represent the best hope of ensuring one of the state's most iconic species survives.

Southern resident killer whales' numbers are the lowest they've been in more than three decades, with only 74 left in the Puget Sound. Lead researchers say there are only about five years left until the current southern residents lose their reproductive abilities.

The recommendations are wide-ranging and include ways to boost the Chinook salmon population, reduce boat noise and decrease pollution - all factors detrimental to resident orcas.

No recommendations were made to breach the Lower Snake River dams, considered by some advocates as the only solution left to get enough salmon to the orcas. More than 600,000 people have signed a petition to breach the dams.

Ten of the plan's recommendations will require state legislation to move; a harrowing prospect in a state Legislature not always known for action.

Joseph Bogaard of the Save Our Wild Salmon Coalition called the recommendations a good first step, and he looks on the Legislature to act.

"We appreciate this initial set of recommendations from the task force," Bogaard said in a release. "But now all eyes are on the Governor and the legislature; they need to move quickly to fully fund and implement these actions. We are playing catch up today, and there is no time to waste."

The task force also hopes the state will "more effectively manage" sea lions and other predators, and adjust catch limits for non-native fish like bass.

Limiting boat interaction with southern residents is also a priority.

In perhaps the boldest recommendation, the task force asked the governor to suspend viewing of southern residents by "all boats" in the Puget Sound for the next three to five years. This would require a vote by the state Legislature.

Members also want the governor to ask the state to ask the Navy to limit exposure to sound from Navy aircraft.

The task force received more than 18,000 written comments about the proposed plan during the draft period from the public.

The full report is posted on the governor's web page.