Crosscut - The Orca Task Force finally has a plan. Will it work? 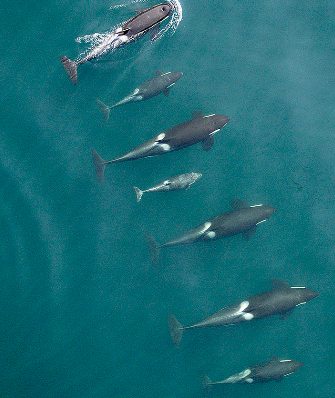 Over the past six months, representatives from Washington’s science, wildlife management, conservation, tribal, government, and business communities have convened to discuss how the state might attempt to reverse the rapid decline of resident killer whales living in Puget Sound.

Now at a 30-year-low, just 74 members remain, with three dying this summer alone.

After Governor Jay Inslee issued an executive order to create the Southern Resident Killer Whale Task Force in March, the group met for seven full-day negotiation sessions across the state, with nearly 150 people attempting to reconcile the needs of Pacific Northwest communities with its directive to produce both immediate and long-term plans for saving the Southern Residents. More than 18,000 citizens sent in public comments, and more than 250 people showed up in person to deliver those comments. The 49-member voting committee presented its final list of recommendations to Inslee this past Friday, releasing and discussing the 30-page document publicly at a press conference at the Seattle Aquarium.

The task force decided on 36 recommendations meant to address three main threats, which all have roots in human activity: lack of food, boat traffic, and chemical exposure. The majority of ideas addressed the orcas’ food shortage, which is the most imminent threat.

Reducing boat traffic Orcas share their home waters with barges, ferries, and whale-watching boats. Orcas waste time and energy avoiding boats rather than hunting, and boat noise interferes with their ability to hunt salmon. The task force recommends options like a limited-entry permit system on all whale-watching, go-slow areas for boats, limitations on shipping and drilling for oil, making ferries quieter and more fuel-efficient, and increasing the minimum distance required for boaters who encounter orcas. Most notably and contentiously, the task force has recommended a five-year moratorium on Southern Resident whale-watching.

Mitigating chemical exposure Stormwater runoff carries toxic chemicals and other forms of pollution from roadways far into Puget Sound and the Salish Sea where it winds up in the tissue of Chinook salmon and ultimately in whale fat stores. Whale starvation exacerbates the danger: Without enough food, whales resort to burning fat for energy, which releases more toxins into their bloodstreams.

Mindy Roberts, Puget Sound program director for the Washington Environmental Council and a member of the task force’s contamination working group, acknowledges that the report’s recommendations might seem overwhelming — but there’s a lot that needs fixing.

“There was a pressure, I would say, to only limit this report to a few recommendations and I actually pressed back on that because I felt like our responsibility in the task force is to be honest about what the orcas need,” says Roberts. “What I'm seeing is a list of very ambitious actions and we are looking forward to turning those recommendations into actions through the legislature next year.”

“I think that on some [recommendations] we could have gone farther, and on others we may have jumped the gun a little fast… [and it] has been cumbersome to some degree, but ultimately it was an overall positive experience to move us in directions that have jump-started work and action certainly by years, if not by decades,” Giles says. “I might have jockeyed the recommendations around in a different order, but given how complicated these issues are, I’m actually pretty happy. Things could be better, but things could be a whole lot worse.”

Giles says the task force’s biggest wins had to do with “huge” habitat protections for salmon and limitations on incidental bycatch (the salmon fishermen are allowed to keep without targeting it). The task force is recommending that orca be taken into further account in the next negotiation of the international Pacific Salmon Treaty, a process which requires federal input.

“Equally gratifying is the way that these people with such disparate backgrounds came together to accomplish that and to agree on a document of this magnitude and heft,” Purce says. “The vast majority of people came to an overall consensus, [and] when you weigh that against the fact that we had 36 recommendations, it's really quite extraordinary.”

But not all task force members came away satisfied, and some abstained from the final vote in protest. This included Center for Whale Research founder Dr. Kenneth Balcomb, who has publicly disagreed with the task force’s approach over the last few months.

“I have to really decide whether or not this task force is for me or not — it doesn't seem to be for the whales so, therefore, I think it's not for me," Balcomb told Q13 Fox News in September.

Balcomb reportedly hoped the task force would push for faster action on the Lower Snake River dams, and he disagreed with the recommended moratorium on whalewatching. He expressed further disapproval with the task force in early November in a Facebook post.

“Frankly, I am embarrassed for the conveners and participants of the Orca Task Force who had to endure blatant and ill-informed political manipulation of a process launched with the good intention of doing something bold to help recover the Southern Resident Killer Whales,” he wrote.

On the day the task force presented its work, a group of activists calling themselves The Remaining 74 Assembly took to the Washington State Capitol’s Temple of Justice holding 74 paper orcas. They demonstrated in support of breaching the four dams along the Lower Snake River before the next legislative session.

"Today, let's wake up our sleepy policy makers, and rebuke the sleepy Orca Task Force. Let's tear down some dams,” said Michelle Seidelman, co-creator of the rally, to an assembled crowd.

"The monster dams are killing fish and orcas, and worst of all, there is no real need for the four deadly dams on the Lower Snake,” argued Howard Garrett, cofounder of Orca Network, at the event. “You’ve gotta undo all this misinformation, and there’s reams of it.”

Scientists we spoke with acknowledged that the task force initially considered recommending Inslee work with the Army Corps of Engineers on dismantling the dams. But with so many stakeholders affected by dam removal, Giles cautioned against forcing the action without buy-in from Eastern Washington communities.

“If they had tried to push this any faster than they did, trying to cram it into Year One, we would have been facing years of litigation, whereas if we have a calm arena in which to bring the science and the science can be hashed out in a safe, non-biased, communal place — I sound like a hippie — I think that’s what it’s going to take,” Giles says. “You have biologists on both sides of the fence. We have to have an unbiased arbiter come and analyze the data and tell us once and for all, what is the economic and ecological impact to all of these different arenas? I’m confident that the science is going to back the removal.”

Roberts points to increased spill from dams as the best immediate course of action.

“To me, that’s the fastest way to get more smolt salmon out to the ocean from the whole Columbia River system, so we are looking forward to that moving forward quickly,” Roberts says.

Others joined Balcomb in criticizing the five-year moratorium on Southern Resident whale-watching. Citing the blow to tourism, the task force representing the Pacific Whale Watching Association voted against the final recommendation.

“I think a lot of folks are questioning if there's science that says this is an absolute problem now,” Roberts says. “At this point, I feel like we should be taking the precautionary approach. And noise is something that we can turn off now that will have immediate impact.”

Now that Inslee has recommendations in hand, some task force members hope the public will continue to pressure state government to act on them quickly enough to make an impact.

“Nobody should take their foot off the gas right now,” Giles says.

But Purce notes that much of the hard work ahead resides with legislators and government officials. Every one of the recommendations requires government input, Purce says — from enacting changes in regulation to increasing enforcement of existing laws and policies.

“We’re very hopeful that the governor will embrace these recommendations, in terms of taking the first steps in providing the resources for what we’ve outlined,” Purce says. “It's tough work for him and his staff. There are sizeable budgetary items that will make the most effect, in regard to the orcas themselves, so, the next steps for us are going to be some really in-depth conversations with the legislature after the governor comes out with the budget and his priorities.”

Whether the orcas can last through typically slow-moving legislation is an open question, but Roberts thinks an engaged public is the orcas’ best shot.

“I do feel like the public has such unprecedented support for these actions — that's what the legislators need to know in order for them to move quickly on this, so we're optimistic,” she says. “We've had conversations with several legislators already and they were waiting for these recommendations and now there will be a ton of work over the next two months to turn those recommendations into legislation. The orcas really can't stand in line any longer. That's why it's so important to take care of their needs in this next bi-annual budget which will kind of set the stage for 2019 through 2021. We can't defer any of the big needs until the following bi-annual budget in 2021 to 2023. We just don't have that time.”

As a researcher, Giles says being able to share and discuss her work directly on even footing with a vast assortment of interest groups felt significant. Being on the working groups allowed Giles to infuse policy discussions with the lived realities of orcas like J50, who carried her dead calf for 17 days over the summer.

“This process has afforded an opportunity for these diverse stakeholders to be in dialogue together in a way that has never happened before,” Giles says. “We’d been going around living our lives while this poor mom is still carrying around her baby, so I let the working group know.  When she ended up dying, I had somebody from Bonneville Power Administration email me a condolence email.”

“I would never have come into contact with this person before the task force,” she says. “If we ever talked, it would have just been my science saying, ‘your organization is running dams that are impacting the food source of the whales that I study that are starving.’”