Will you be on the river this summer? Do you have a story or photo you would like to share? Please send them to Jacob Schmidt 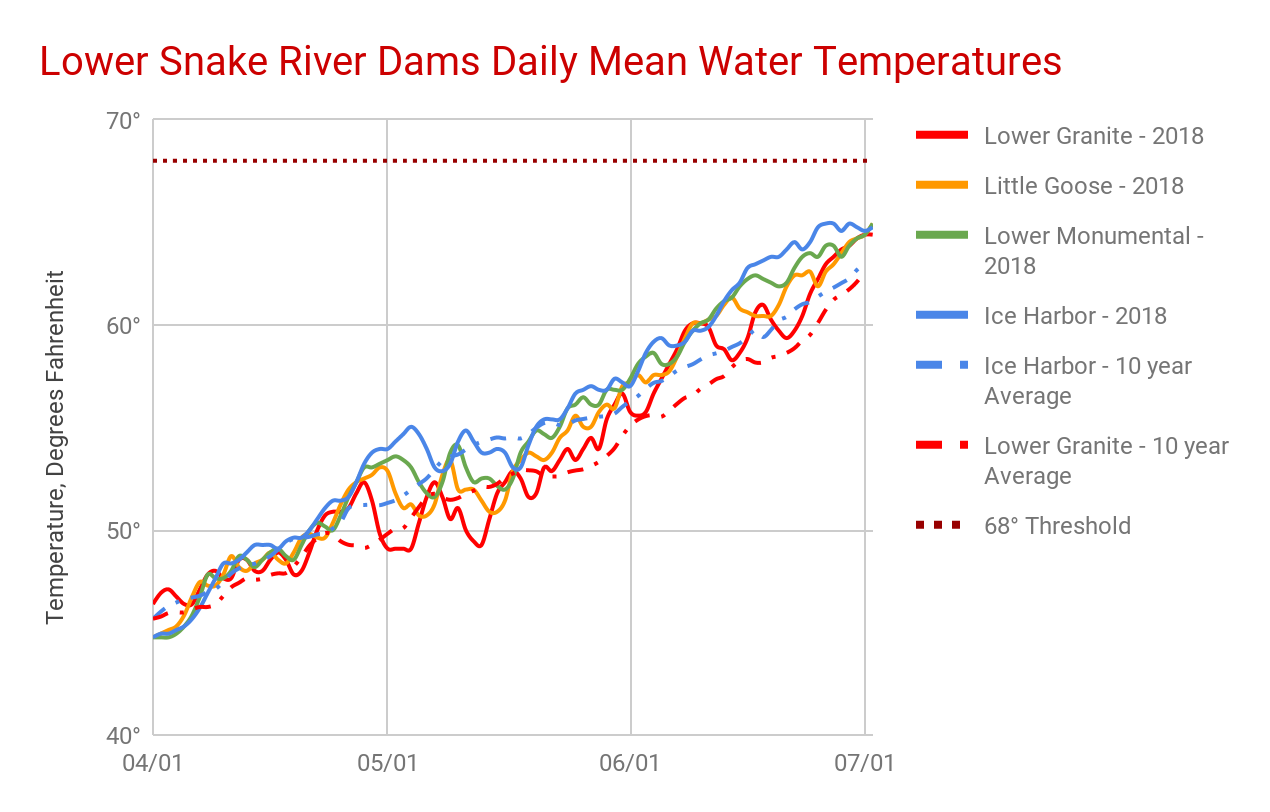 The daily mean temperature at the forebay (upstream reservoir) of each dam is represented in the solid lines, while the 10 year average (2008-2017) for each reservoir is represented by the dashed line of the same color. The dotted line across the top of the graph represents the 68° survival threshold for juvenile salmon. The longer temperatures remain above 68° and the farther the temperatures rise above 68°, the more severe the effects, including: increased metabolism, increased susceptibility to disease, reduced fecundity (reproductive potential), and/or death

Note that all of the lines on the graph are starting to converge. Over the past week, temperatures have evened out across the Lower Snake River. This happens every year around this time once the deep snowpack of central Idaho has melted away. With fewer infusions of cold snowmelt from the upper basin, Lower Granite Reservoir starts to resemble each of the downstream lakes in temperature. However, this year the transition from spring to summer flows has coincided with above average air temperatures, heating up the river far above the 10 year average. The 68° threshold is fast approaching, especially at Ice Harbor. 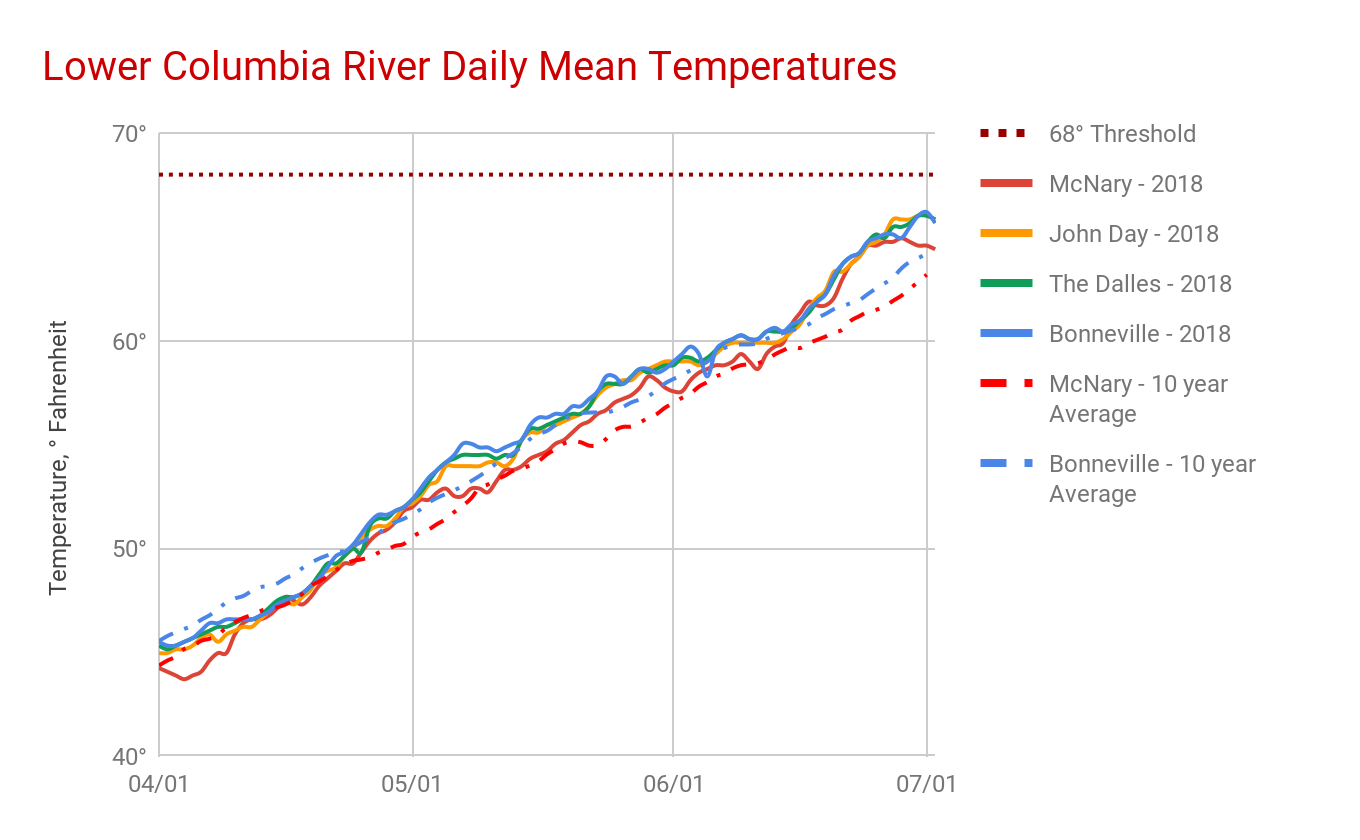 Temperatures on the Lower Columbia River continue to climb with each of the three lowest dams registering a 66.2° for multiple days. McNary Dam is the only outlier, having dipped slightly for a few days. Perhaps the most interesting development of the past week, however is the gap between the temperatures of the past week and those of the past ten years. As mentioned above, Washington state has been experiencing above average air temperatures and below average precipitation. For an in depth look at river flows and water quality, read the Army Corps of Engineers’ recently released report on increased spring spill at Columbia and Snake River dams described in detail here. 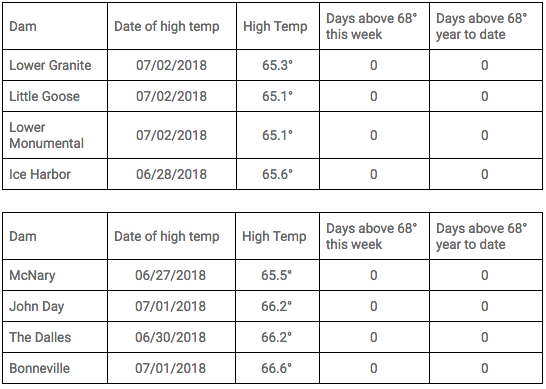 Ice Harbor Dam near the confluence of the Columbia and Snake in Pasco, WA registered the highest instantaneous temperature on the Snake River this week at 65.6°. Each of the other three dams upstream of Ice Harbor are close behind by less than half a degree. Bonneville Dam, the furthest downstream in the system, traded places with McNary Dam, the first downstream of the confluence, this week registering the high for the Columbia at an ominous 66.6°. 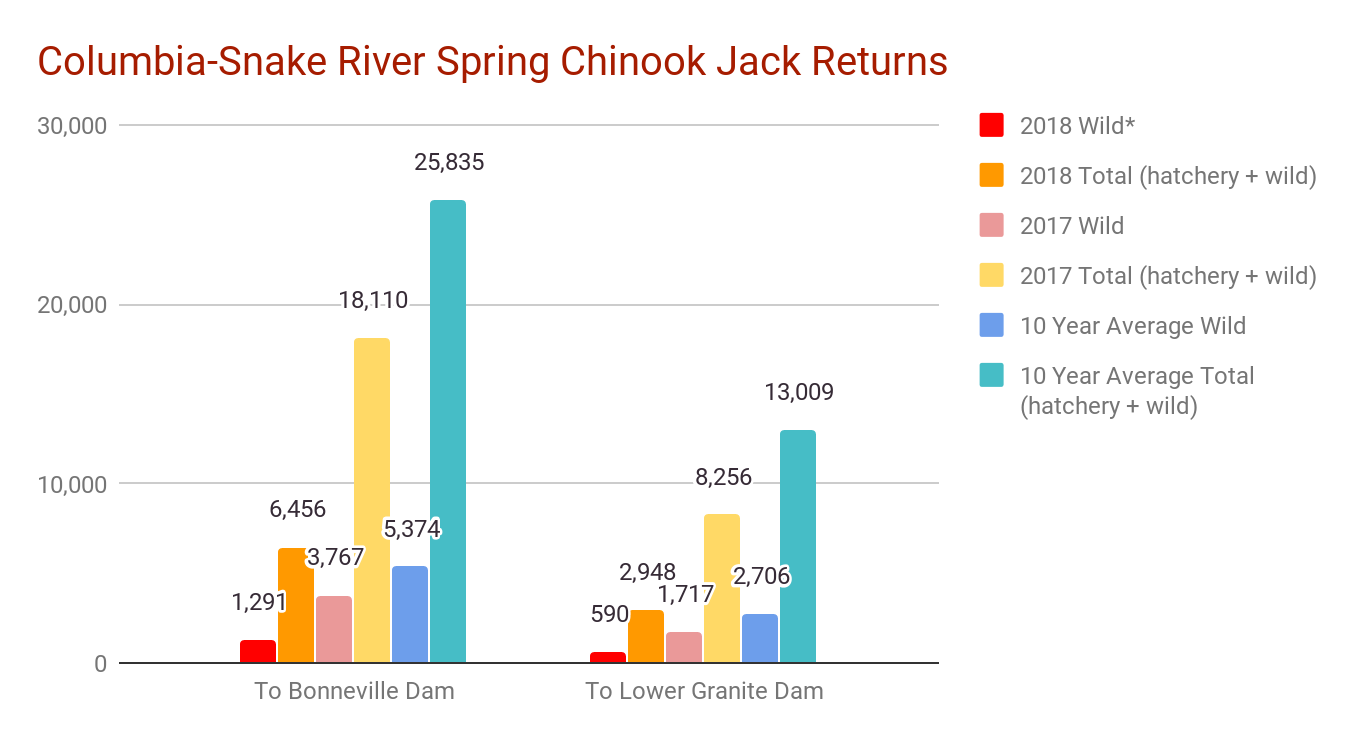 This week we are taking a look at the spring chinook jack returns. This statistic is a little more difficult to grasp and interpret than the full spring chinook return that was featured last week, but it is worth examining here. Male chinook salmon that return to fresh water streams to spawn a year or two earlier than their counterparts are known as “jacks”. These younger, smaller chinook salmon are seen as an early indicator of returns in years to come, although the reliability of jack counts in predicting adult returns in future years is not universally agreed upon.

Looking to the chart above, the number of Jacks that returned this Spring is concerning to put it lightly. The number of jacks that made it back to Idaho by June 1 of this year represents a 64% decline from 2017 and a 75% decline from the 10 year average. A clear culprit in the case of this historically low jack count is the river and ocean conditions of 2015-2016. The jacks returning to spawn this year are those that were born during the drought of 2015, a year which saw unprecedented river temperatures in the Columbia-Snake basin. Those that survived the trip to the ocean that year then lived through the ocean “blob” in the north Pacific, a large mass of nutrient deprived hot water that first appeared in 2013 and expanded until dissipating in 2016. The latent effects of these water conditions will continue to be felt in the rivers over the next several years. 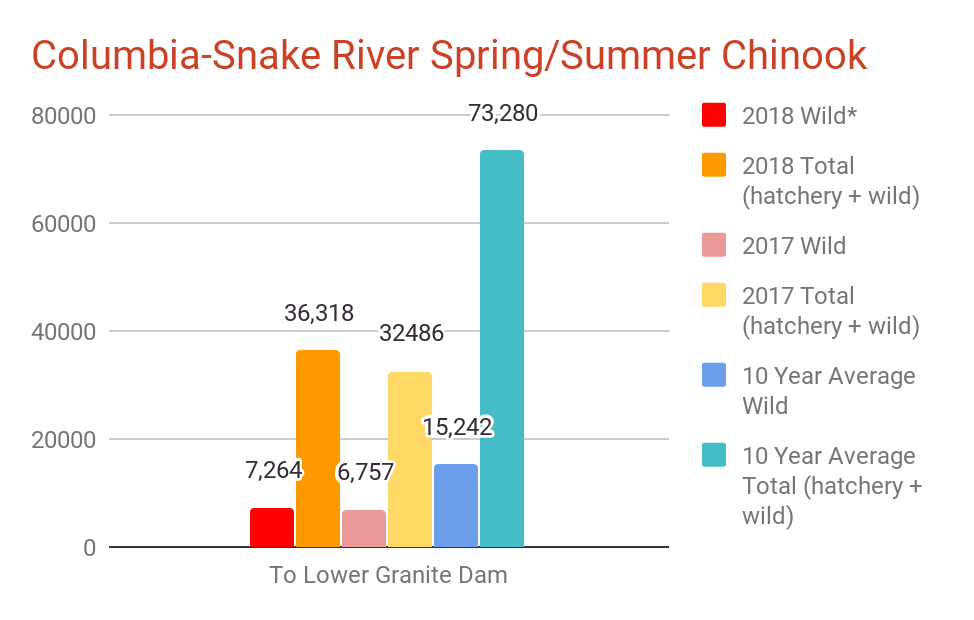 In the coming weeks we will be leaving the chinook behind to look at sockeye salmon, steelhead trout, sturgeon, lamprey, and more, but before doing so, let’s check in on the combined spring/summer chinook count so far. In the last report, we presented wild returns based on the estimate that wild fish make up 20% of the complete run (shown in the graph above), but that estimate slightly overpredicts the number of wild chinook returning to spawn this year. On June 29, Idaho Department of Fish and Game downgraded their forecast for wild spring/summer chinook to 7,000 at Lower Granite dam, down from an earlier forecast of 12,655. The run this year will at best be similar to last year's run or just slightly better, placing it among the worst in decades. Downgrading the forecast has led to the early closure of summer chinook fishing below Bonneville with other upstream fisheries, including the Little Salmon River in Idaho, closing early as well. In addition to the impact that low chinook returns have on recreational and commercial fishing economies in rural communities, the lack of chinook from the Columbia Basin is one cause of the decline of critically endangered Southern Resident Orca population that depend upon chinook for at least 80% of their diet. On the bright side, sockeye fishing season has opened with better than expected early returns, which we will look at in more detail next week.