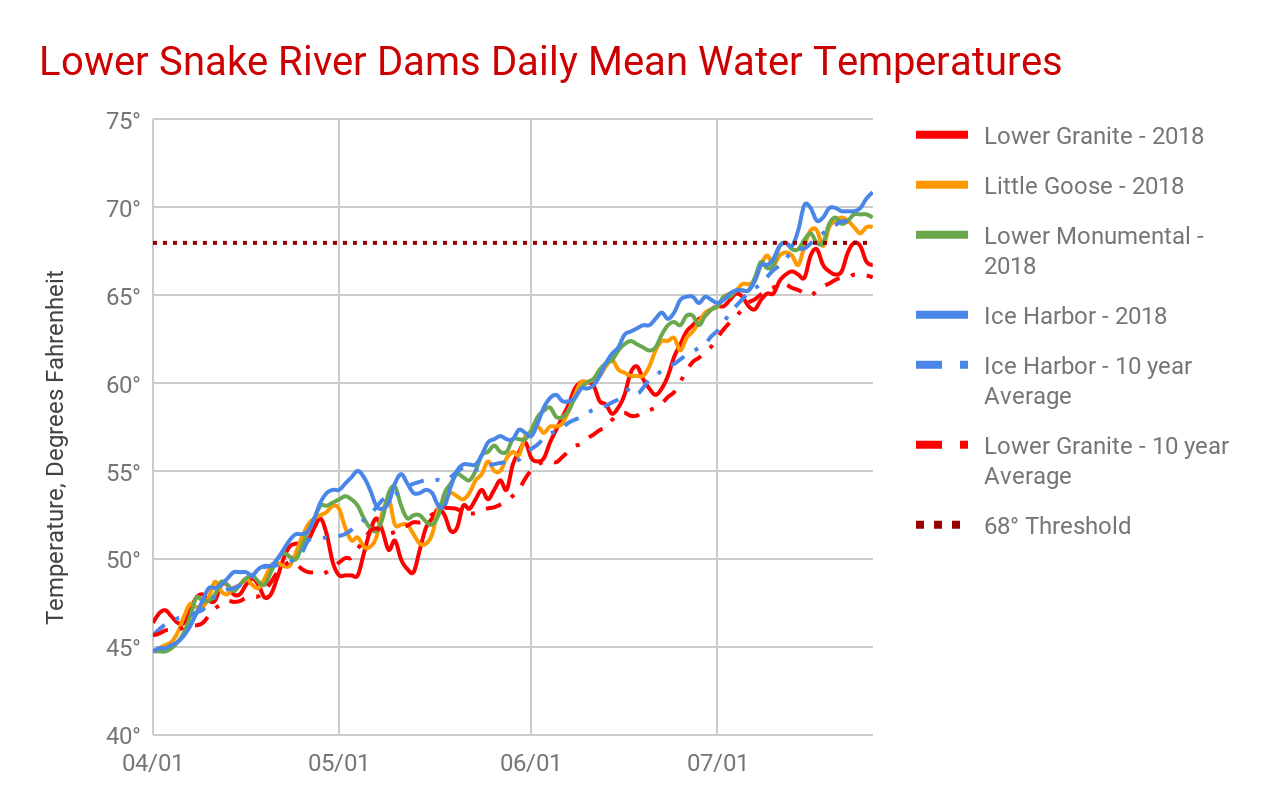 Temperatures at the three downriver dams have begun to level out at around 70° F. With the warm sunny weather continuing for the forecasted future, this long section of the Snake River will likely remain above the survival threshold for migrating salmon. It is difficult to see through all of the converging lines on the graph, but note the 10 year average temperatures for this week at Ice Harbor Dam represented by the blue dotted line. Every year for the past ten, the heat at Ice Harbor has exceeded 68° by the end of July. While that temperature was reached early this season, salmon killing temperatures have become the norm on the Lower Snake for more than a decade.

The temperature at Lower Granite Dam near Clarkston, WA has climbed once again from the temporary infusion of cold water two weeks back. An unexpected error at Dworshak dam caused the cold water infusion to be reduced, causing a near catastrophe at the Nez Perce Fish Hatchery downstream. Cold water from Dworshak takes about three days to reach Lower Granite, so the daily average at Lower Granite will remain above the 68° threshold throughout the weekend, when temperatures in Lewiston are set to exceed 100°. 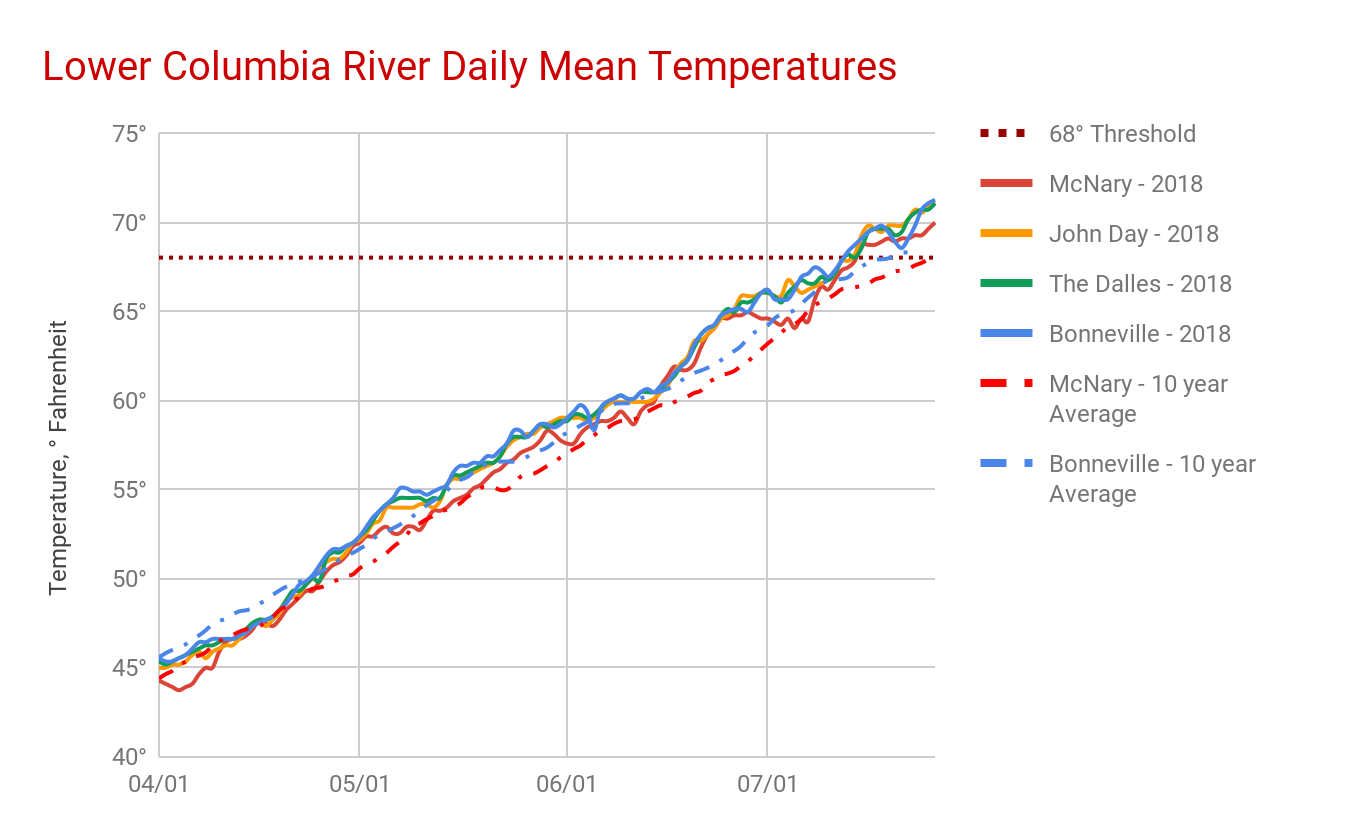 Lower Columbia River Temperatures took a sharp upward turn this week, clearing 70° at all but the furthest upstream dam. Unlike conditions on the Lower Snake, which have begun to match 10 year trends, Columbia River temperatures are more than 2° above average this year. Hot and dry conditions continue across the basin with extreme fire danger in Both Klickitat and Benton Counties along Lakes Umatilla and Wallula--the lakes formed by John Day and McNary Dams respectively. Seven counties in Oregon are now officially under drought conditions, and while streamflows in Washington and Idaho are at or above normal, flows in Oregon--where snowfall was considerably lower this past winter--are at 25-50% of the average. 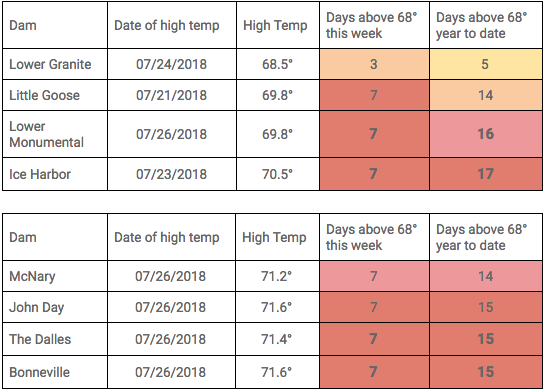 As every recording site along the 253 miles from Bonneville to Lower Granite begins to register daily temperatures above 68°, this section of the report will look more and more red. The same spots on both rivers continue to be the hottest with the addition of Bonneville Dam this week. The long arid stretch of flatwater behind John Day Dam, Bonneville near Portland, and the increasingly ironically named “Ice Harbor Dam” registering this week’s record highs. All sites on the Columbia hit record highs for the season on Thursday.

At times, salmon advocates wish that the endangered species they fight so hard to restore received the love and notoriety that tigers and pandas do; that cuddly stuffed salmon were sold at every toy store. Those who work tirelessly on behalf of the lowly Pacific Lamprey however, would be happy with even public awareness that the species exists. While most Americans today cringe at the idea of catching and eating anything resembling an eel, Native tribes all along the Pacific Coast have been harvesting lamprey for food for centuries. The memory of once abundant lamprey remains in place names like Eel Creek on Idaho’s Lochsa River, and the Eel River in California. While these fish are long and slender like an eel, they are actually much closer related to sharks.

The Pacific Lamprey is an anadromous species, meaning that like salmon, they are born in freshwater rivers, mature in the open ocean for two or three years, and return to the rivers to spawn. Lamprey spend more time in freshwater than salmon, migrating between March and June and spawning between July and September. Juveniles hatch in the cooler fall temperatures, and overwinter inland before heading to the ocean. lamprey are classified as parasites, creatures which survive by leaching energy from a host. These eel-like fish cling to the outside of a larger fish with their three sharp front teeth and drain small amounts of blood from that fish until decoupling and moving on to another. This life cycle led early European settlers of our region to believe that the lamprey were a pest that weakened or killed the more desirable salmon. In the early 20th century, Lamprey were exterminated wholesale in some streams with the use of chemical pesticides. Unsurprisingly to the modern observer of history, this was a destructive policy for the ecosystem and another blow to Indigenous cultures and food systems. If intentionally exterminating lamprey were not enough, fish ladders were not built with lamprey in mind, making them even more vulnerable to the habitat destruction wrought by the construction of hydroelectric dams. Without abundant lamprey to feast on, predators like sea lions rely more heavily on salmon and steelhead, reducing those populations even faster. 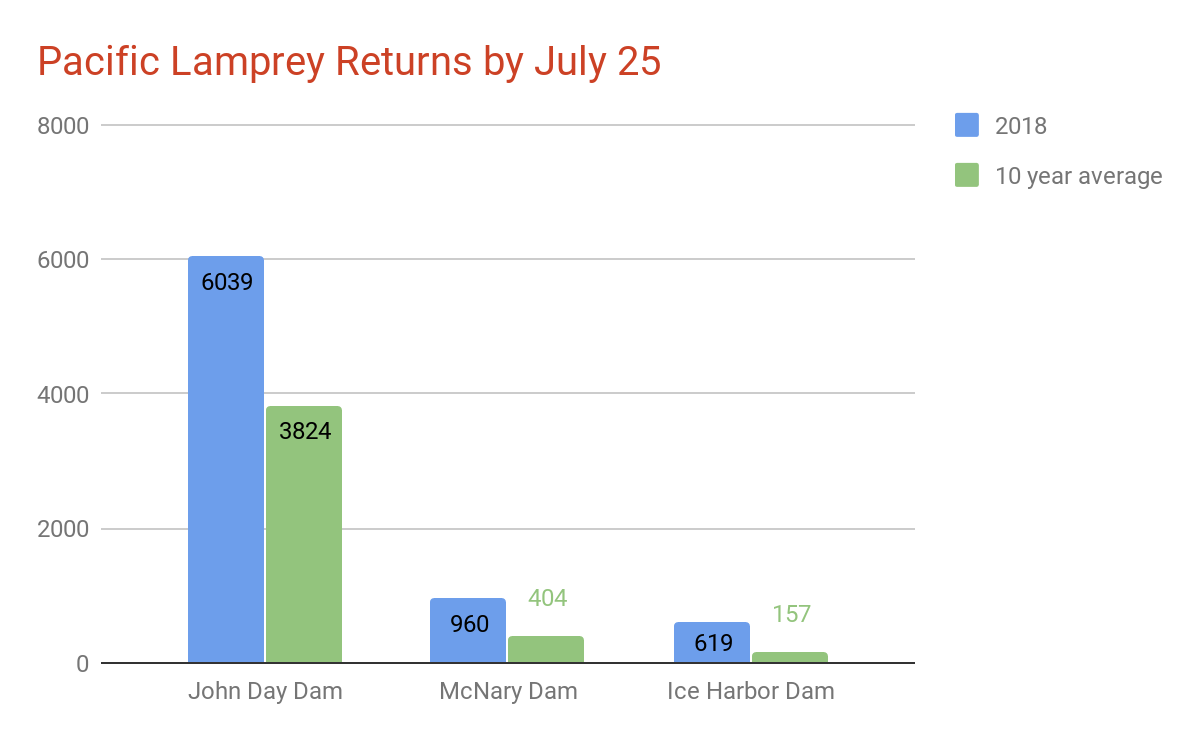 Despite all of this negative history, Pacific Lamprey recovery efforts are a lone bright spot among fish returns this year. Lamprey are the only species returning in numbers above the ten year average. This is due in large part to the efforts of Native tribes, particularly the Umatilla, Grande Ronde, and Nez Perce. We have selected John Day, McNary, and Ice Harbor Dams for this chart to demonstrate just how significant the project to recover lamprey on the Umatilla River has been. The Umatilla River enters the Columbia midway between John Day and McNary dams, meaning that the huge drop in lamprey counts between those two sites is not an indication of lamprey dying in the reservoir, but returning to their home stream to spawn. Note as well that the lamprey count does not drop significantly between McNary and Ice Harbor. This indicates that the majority of the remaining lamprey run after Umatilla is headed for Snake River tributaries and not to the upper Columbia Basin. No lamprey have been spotted on the Wenatchee River in the past two years.

With such impressive results on the Umatilla River, tribal fisheries managers are eager to implement similar programs across the basin. This may not happen however, as the latest BPA wildlife budget makes significant cuts to lamprey recovery projects.