Will you be on the river this summer? Do you have a story or photo you would like to share? Please send them to Jacob Schmidt

Check out past Hot Water Reports 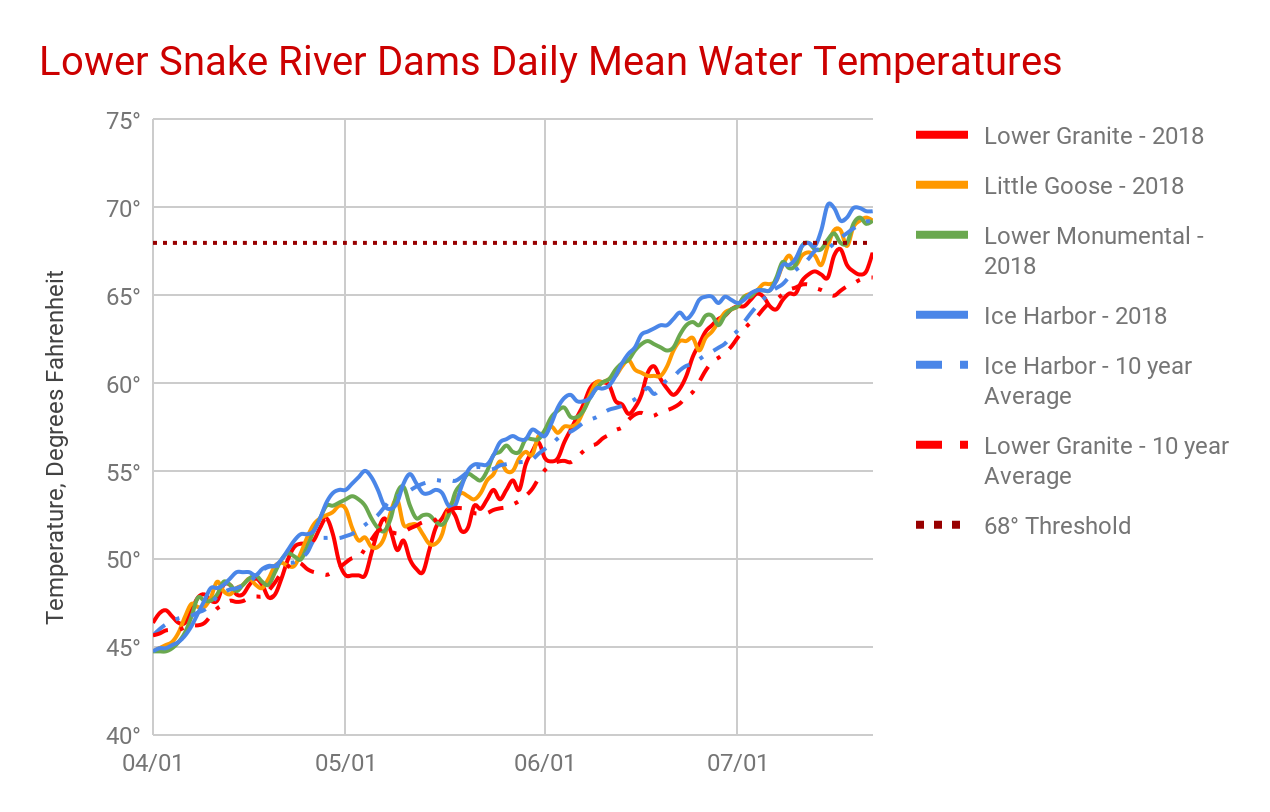 If you are unfamiliar with the location of the Lower Snake and Lower Columbia dams, you can find a map here.

The temperature at Ice Harbor dam has skyrocketed this week, so much so that I have had to adjust the upper limit of the graph from here on out. This marks the first time on the lower Snake this year that the daily average temperature has remained above the survival threshold for multiple days in a row.

You may remember from last week that cold water from Dworshak Reservoir was being spilled in order to aid sockeye migration. The ability to add cold water to the Clearwater River just above its confluence with the Snake is sometimes cited as a key feature of Dworshak--a dam which cut off fish passage from the extensive North Fork Clearwater Basin--however, the benefit of added cold water do not last long in the heat of the summer and do not spread downstream. While the red line representing Lower Granite Dam has remained the lowest of the four, the July 9 spill has made no measurable difference at the other three downstream dams. 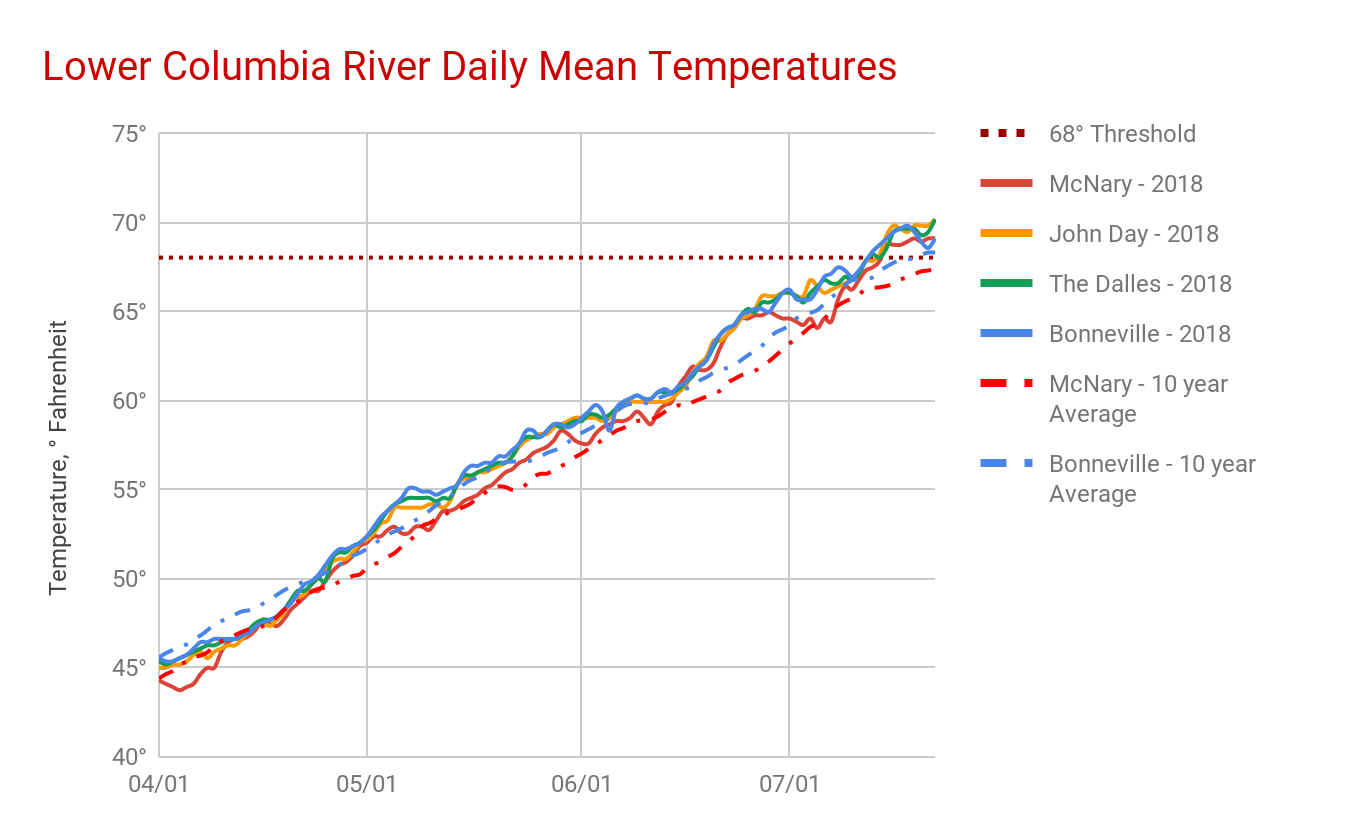 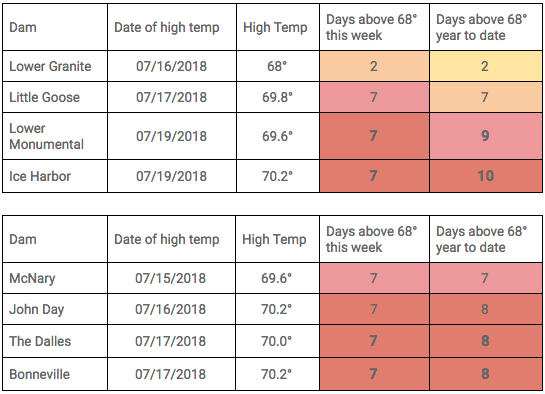 Ice Harbor Dam near the confluence of the Columbia and Snake in Pasco, WA reached temperatures above the survival threshold of 68° every day this week, peaking on 19 July at 70.2°. Lower Monumental and Little Goose, the next dams upstream of Ice Harbor have closed in on that temperature record, staying above the threshold for as many days this week as Ice Harbor. John Day Dam, which forms the longest reservoir on the Lower Columbia registered the highest temperature of the Columbia dams once again at 70.2°. Temperatures at Bonneville Dam matched those at John Day a day later. 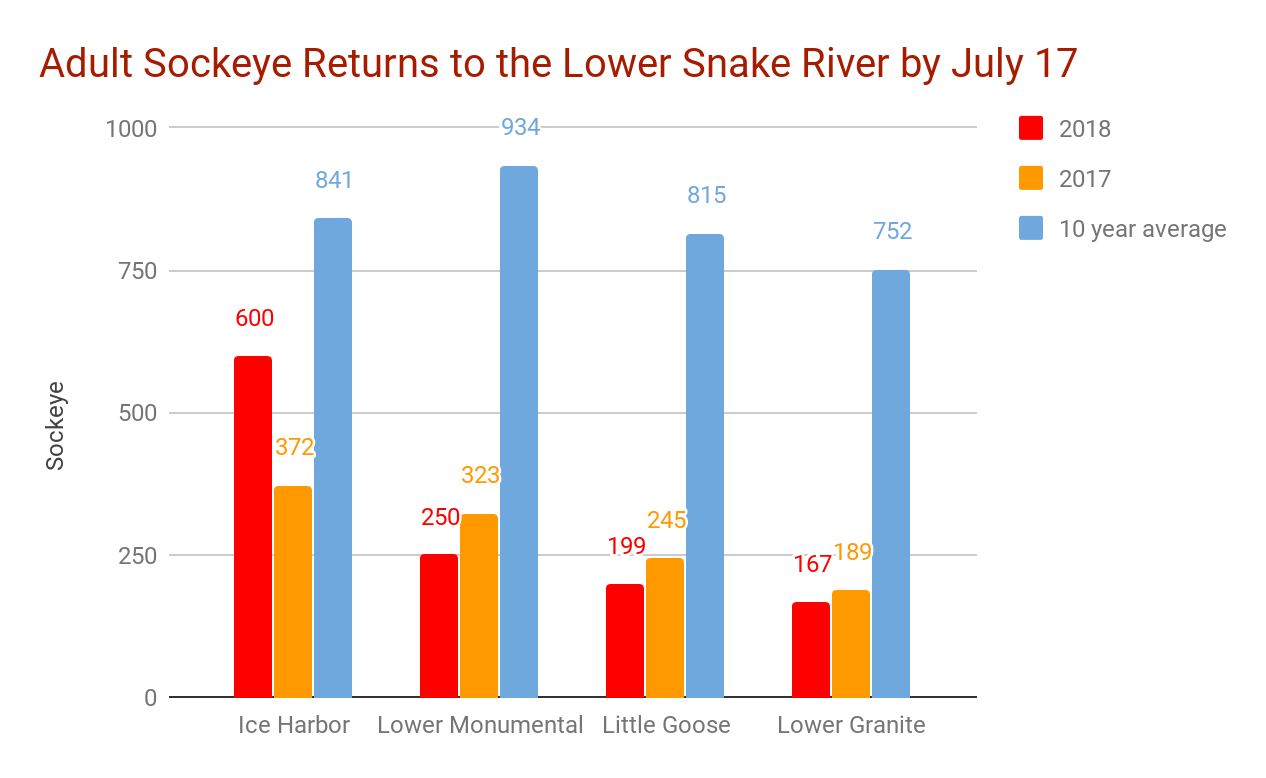 A week has past since we first looked at sockeye salmon returning to the Snake River Basin, but the run has hardly improved. At the time of the fish counts shown in the graph above, scientists estimate that 90-100% of sockeye returning this year have passed Ice Harbor and that 65-85% have passed Lower Granite. Looking to the red bars on the graph above, note that 53% of the run is lost between Ice Harbor and Lower Monumental Dam, a distance of 32 miles. While some of the difference is attributable to timing, i.e. a portion of those fish counted at Ice Harbor had simply not reached Lower Monumental yet, evidence suggests that the majority of these fish have died in the hot slow water of the reservoir.

Unlike steelhead, and chinook which find colder water to wait in and recuperate, upstream migrating sockeye do not rest. They just keep going. This behavior, coupled with their presence in the hot, dammed sections of the rivers at the hottest time of the year--June and July--makes them uniquely vulnerable to fatigue over the course of 320 miles of hot slackwater.

Only a slim portion of the 167 sockeye that have reached Lower Granite are wild or naturally spawning fish. Most of the already small number of sockeye that will reach Redfish Lake will be hatchery fish, which while important for providing genetic material to the hatchery program, do not count toward endangered species recovery. Last year, 228 total sockeye crossed Lower Granite Dam. Of these, 162 survived to the Sawtooth Valley. Only 11 of these were wild or natural spawners. When that proportion is applied to this year’s Lower Granite return so far, we are left with a single digit wild return to Redfish Lake.

How then is it possible to recover the 2,500 wild origin sockeye needed to meet the recovery goal set forth by the Endangered Species Act? This question may not have an answer with the current state of habitat for Snake River sockeye. What sockeye are experiencing in the river right now with temperatures exceeding 70° is not unusual, it has become routine. The status quo of Columbia/Snake dams, and hot water due to both the reservoir condition and climate change, is a death trap for this species.