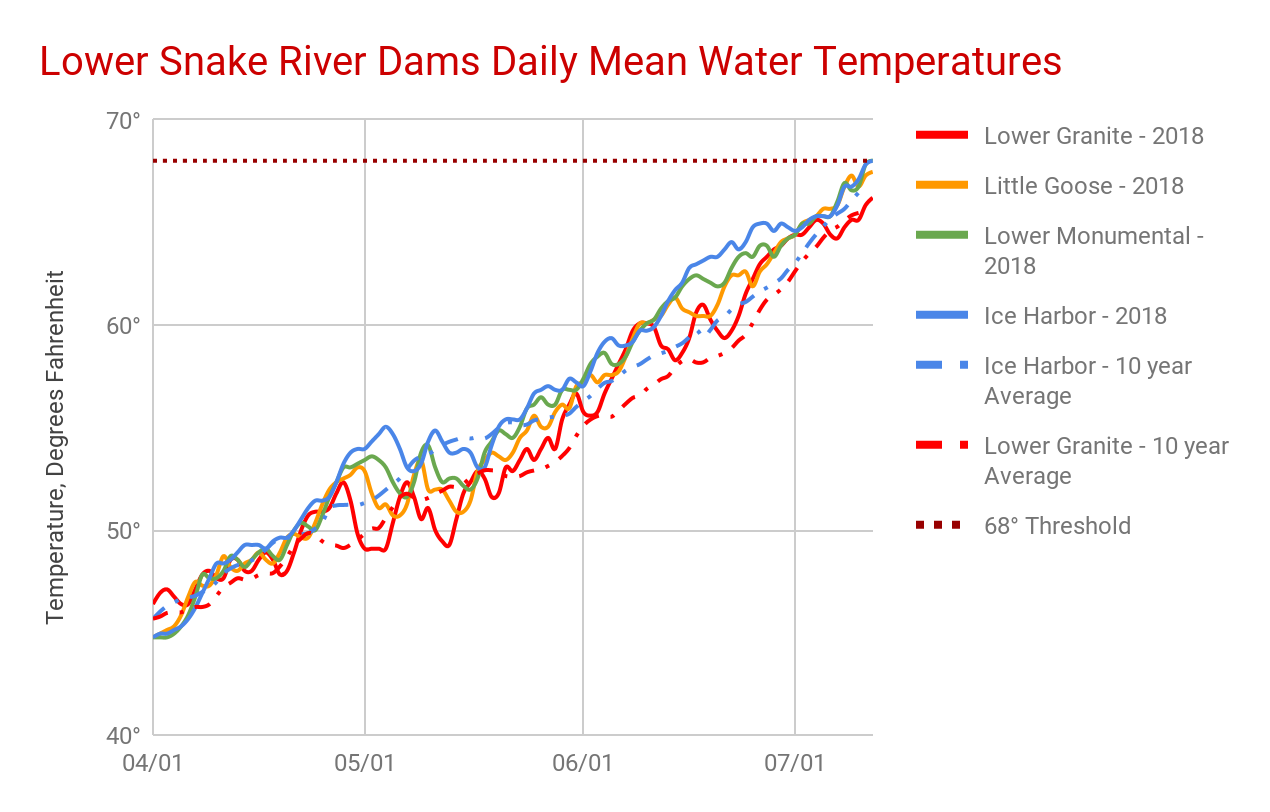 Temperatures across the basin continued to rise steeply this week with both Lower Monumental and Ice Harbor dams registering high temperatures above the 68° threshold. With highs in the mid 90s for days on end in our region’s cities, the heat is starting to get tiresome, but in the Columbia and Snake Rivers the heat is proving lethal. Sockeye migration is running right up against the high temperatures at Ice Harbor which we will discuss at length later. The one positive development is the below average heat at Lower Granite Dam, which may provide a restful boost on the last leg of the salmon’s journey to spawn. This drop in temperature results from a July 9 infusion of cold water from Dworshak Reservoir. It is clear from the graph above that this cold water boost does not persist downstream of Lower Granite Dam. 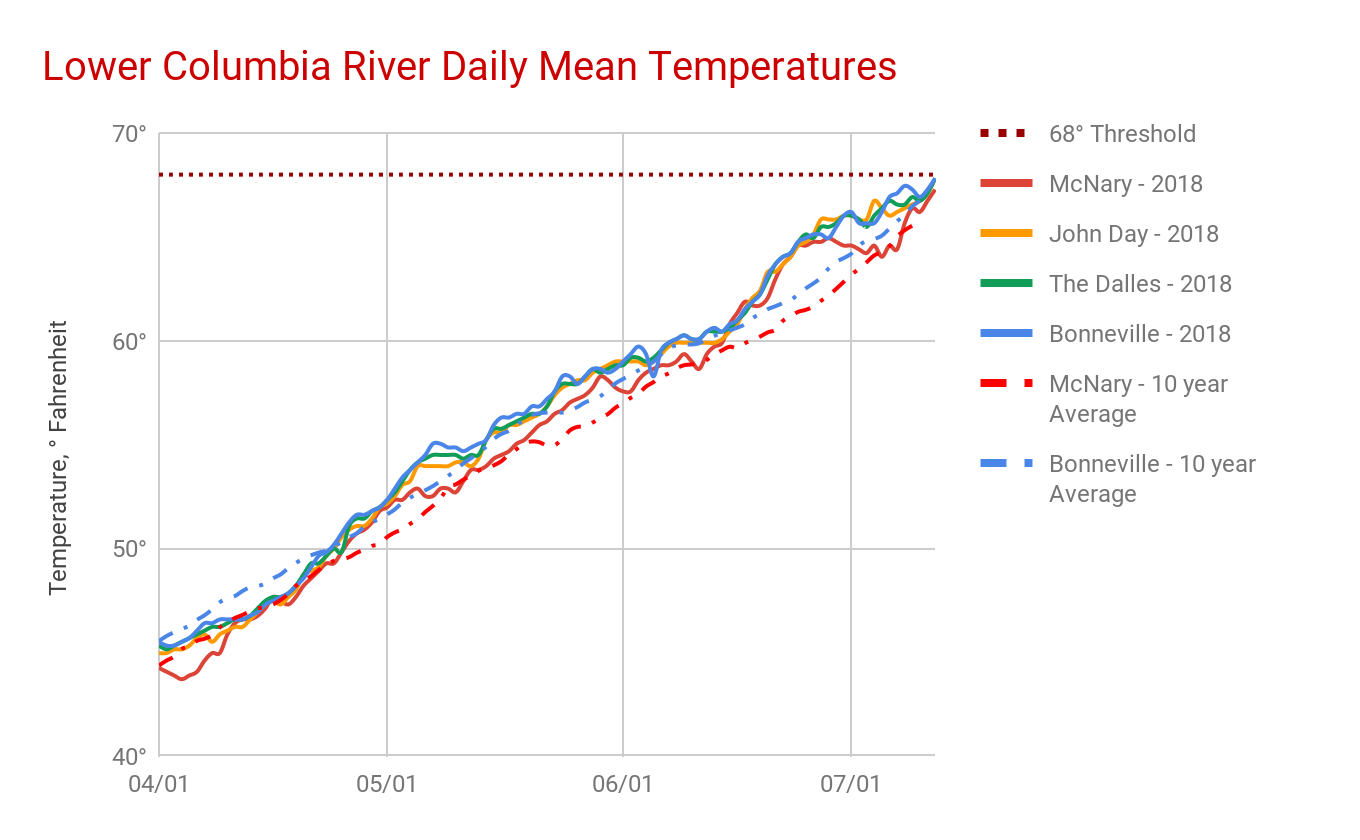 Temperatures on the Lower Columbia continue to rise as well, with all reservoirs registering a daily mean temperature less than one degree below the threshold. While temperatures this year are still slightly above average, the 10 year mean lines on the graph are starting to catch up with the current daily data.

John Day has taken the place of Bonneville as the hottest reservoir in the system this week. The slackwater at Lake Umatilla--the reservoir formed by John Day Dam--is the longest reservoir on the Lower Columbia at 110 miles. Salmon migrating through the lower Columbia are facing the highest temperatures of their journey during the longest stretch of that journey. 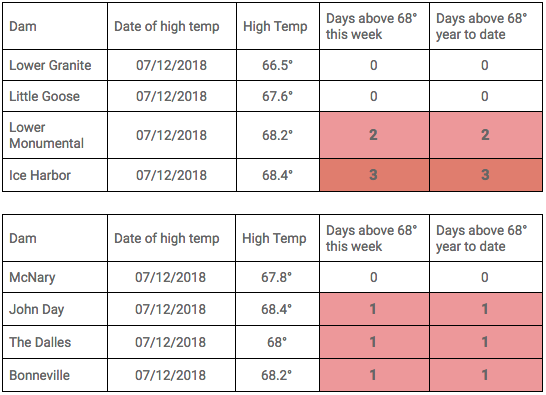 Ice Harbor Dam near the confluence of the Columbia and Snake in Pasco, WA is the first on the Columbia-Snake to register a temperature above the survival threshold of 68° on 10 July. Temperatures remained above the threshold for the rest of the week following with the highest instantaneous temperature on the Snake River at 68.4° this week. The next dam upstream of Ice Harbor was close behind by less than half a degree with two days over the threshold. John Day Dam, which forms the longest reservoir on the Lower Columbia registered the highest temperature of the Columbia dams at 68.4°.

The red and green color and hook like jaw of a spawning stage male sockeye is the image conjured by most of us when we hear the word “salmon.” These beautiful endangered fish will be our focus this week as the majority of the Snake River sockeye run has made it past the confluence and is now traversing the Lower Snake.

The name sockeye literally means “red fish” in Salish, a name which in English belongs to the highest elevation spawning ground of any anadromous fish in the world, Redfish Lake, Idaho. Sockeye were the first Snake River salmon stock to be listed as endangered in 1991, prompting the formation of the Save Our Wild Salmon Coalition, whose staff composed the report you are now reading.  Sockeye are the third most common of the Pacific salmon species due primarily to the Alaskan populations whose habitat is largely unobstructed. In 1880, it is believed that 150,000 sockeye salmon returned to the Snake River basin, spawning in natural lakes in the Wallowa Basin and central Idaho. More than 35,000 sockeye would return to the Redfish Lake under the Sawtooth Mountains every year, which is now the primary target location for recovery. Sockeye have disappeared entirely from other lakes.  Snake River sockeye populations declined so much from the impacts of dam building and overfishing that by 1992 only one--dubbed “Lonesome Larry”--completed the journey to Redfish Lake.

The improbable journey of Lonesome Larry drew renewed attention to the plight of all Snake River salmon and inspired action from state agencies and conservation groups alike. Idaho Fish and Game responded by establishing a sockeye rescue program, based on captive broodstock headquartered at Eagle, Idaho hatchery. . In recent years the sockeye return to redfish lake has given some cause for hope, but in 2017 only 11 natural sockeye survived the 900 mile, 6,500 vertical foot swim to Redfish Lake. With a stated recovery goal of 2,500 natural origin fish returning to Redfish, hope for the future of wild Snake River sockeye is illusive.   The captive brood program has avoided extinction, but has not made significant progress toward recovery.

Sockeye are especially susceptible to hot water mortality, as this salmon species does not rest during the whole of their migration, choosing instead to endure what water conditions may come. In a drought year like 2015, this is a recipe for disaster. During the summer of 2015 so many sockeye died in the Columbia-Snake reservoirs that their bodies lined the river bottom. Bottom dwelling fish such as the endangered white sturgeon consumed the dying sockeye and started to suffer themselves as the heat had left these sockeye more vulnerable to infections which were then passed to their predators.  The hot water that killed sockeye by the thousands in 2015 set off a chain reaction that led to upwards of 80 sturgeon deaths. 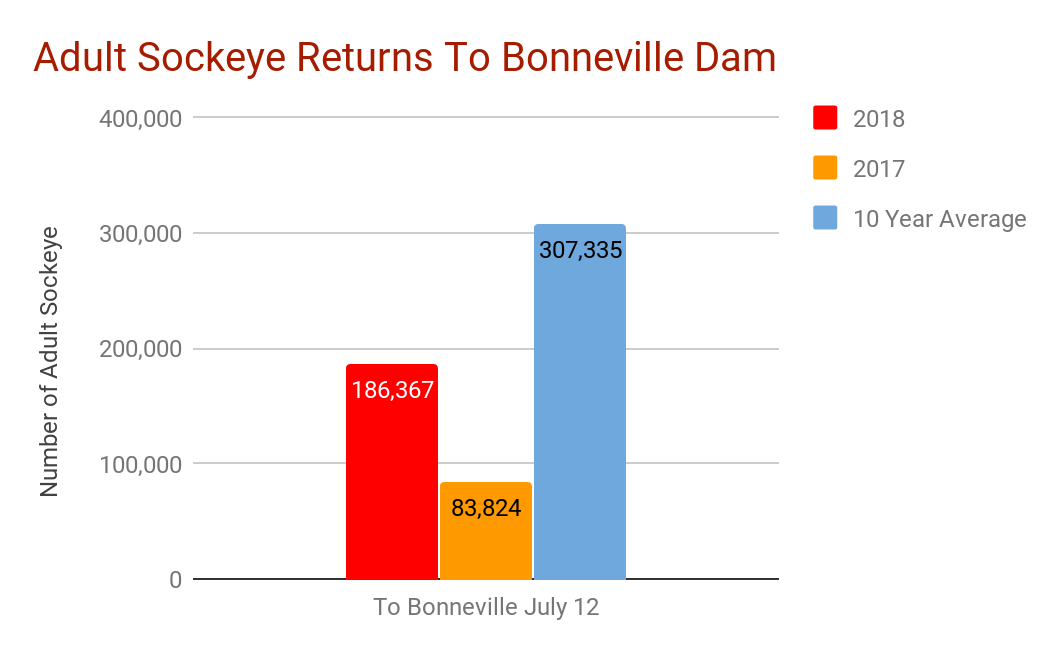 *of those counted, 10% are believed to be wild in origin 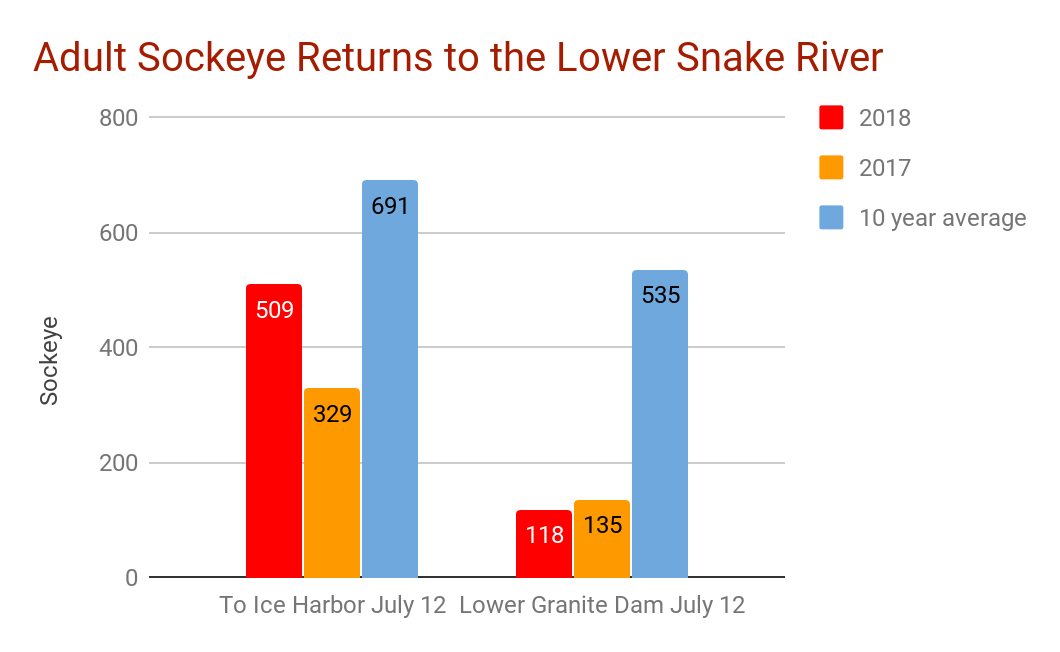 While the sockeye returns this year showed a major improvement from 2017 at Bonneville on the Lower Columbia, the long, hot swim up to the Snake River basin appears to be taking its toll. Sockeye returning to the mouth of the Columbia showed up early this year and in far greater numbers than initially predicted, more than doubling 2017 returns and prompting an early opening of the fishing season. Idaho Fish and Game estimates based on past years, that by July 9, 80-100% of the sockeye run will have passed Bonneville Dam, so the numbers on the first graph can be viewed as representative of the total run.

Looking to the second graph, we see how many of those 185,191 sockeye that have passed Bonneville Dam are heading to the Snake River. Sockeye originating from the Snake River basin account for a tiny portion of the overall Columbia River population, despite the Snake basin representing over a third of their available habitat. As the second graph displays, only 509 of those sockeye have entered the Snake River at Ice Harbor Dam. This is up from the critically small 2017 run, but still a long way from recovery goal of 2,500 and a far sight from the historic runs of over 35,000. Looking now to the number of sockeye reaching Lower Granite Dam--the last dam they will traverse--the 2018 count falls below the 2017 count for the same day. It is important to note that the current count at Lower Granite represents only 25-35% of the total for the year, and that those at the head of the pack now will not reach Redfish Lake until the end of July, but the disparity between Ice Harbor and Lower Granite counts is still cause for concern.

First sockeye returns to Redfish Lake Creek in past years:

Seattle Times: Washington warmed slowest of all states over past 30 years — but what does it mean for climate change?