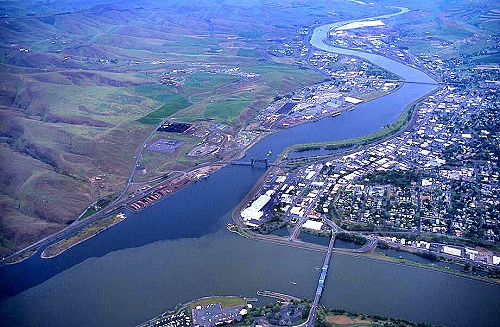 Sediment accumulation in the lower Snake reservoirs is already a big expensive problem. Over time it dooms the reservoir behind Lower Granite Dam to a fairly short life, as it steadily fills in and thus creates a fiscally unmanageable flood risk to Lewiston, Idaho. The Army Corps of Engineers’ local office has no taste to squarely face the long-term issue, preferring instead to repeat next winter its usual temporary response: dredge the reservoir’s navigation channel to keep it open a few more years. Retired Forest Service hydrologist Al Espinosa aptly calls this approach “chronic dredging.”

But in its environmental impact statement (EIS) intended to legally justify the next round of chronic dredging, the Corps admits a compounding climate effect. Fire frequency in the watersheds above the dam is increasing, thus increasing already-sizable sediment flows into the reservoir.

Appendix D to the Corps’ document is a study by James R. Goode et. al., Enhanced Sediment Delivery in a Changing Climate in Semi-arid Mountain Basins: Implications for Water Resource Management and Aquatic Habitat in the Northern Rocky Mountains. From that study:

"Climate-modulated interactions among vegetation, wildfire, and hydrology suggest that sediment yields will likely increase in response to climate change. Within central Idaho recent climate-driven increases in wildfire burn severity and extent have the potential to produce sediment yields roughly 10-times greater {emphasis added] than those observed during the 20th century. …these elevated sediment yields are probably outside of the range of expectations for downstream reservoirs, which may have consequences for reservoir management and life expectancy."

The Army Corps does not quantify the sediment and fiscal impacts of this trend. Doing so would show chronic dredging as even more fiscally and environmentally unsustainable than it already is. But residents of Lewiston, waterway users, taxpayers, fishermen, and Northwest elected leaders need that information, so SOS and others are asking for it.

This is not the only climate-related impact of the Corps’ chronic dredging. The Corps’ document, for example, completely ignores the unique value of Snake River salmon and steelhead in the hot-and-getting-hotter Columbia and Snake Rivers – that they are the highest and longest-migrating salmon group on earth, with the coldest spawning areas of any salmon in the 48 states. Yet these are the salmon most adversely affected by both the presence of the Lower Snake dams and chronic dredging of the lower Snake. Climate change also has large effects, which also go un-analyzed, on the Corps’ plan and justifications for disposal of the huge volumes of dredged silt.

Climate change effects are a critical legal, biological, and economic issue confronting people who live near and use the lower Snake reservoirs, Northwest people generally, and American taxpayers. These effects strengthen the already-strong case that what Al Espinosa calls “the lower Snake entitlement” should and will not survive federal fiscal retrenchment.

Climate change as it affects the lower Snake waterway is a taxpayer issue.

*I want to acknowledge my reliance on Linwood Laughy’s expert citizen analysis of the Army Corps’ lower Snake dredging EIS.