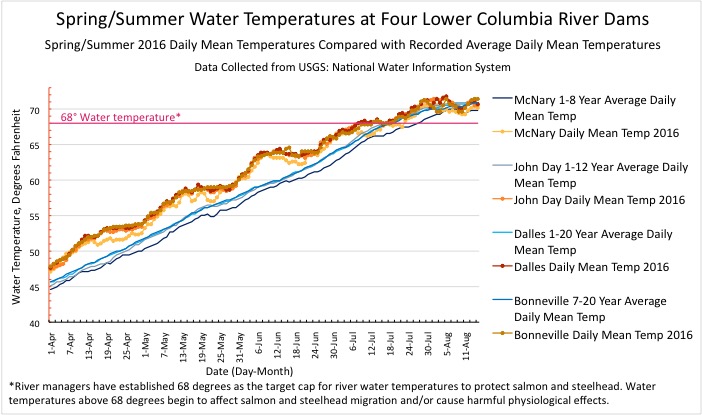 Notably, temperatures in the Lower Columbia River reservoirs continue to read consistently above 68 degrees F. - ranging between 69 and 72 degrees Fahrenheit since mid-July.

Overall in the four lower Snake River reservoirs, 68 degrees has been reached or exceeded 16 times this past week and 93 times so far this summer.

In the four lower Columbia River reservoirs, 68 degrees has been exceeded every day in all four reservoirs for a total of 28 times this past week and 143 times so far this summer.

THIS WEEK ON THE RIVER: Fishing, conservation groups file to sue the EPA over failure to address hot water impacts on endanger salmon

Groups including the Pacific Federation of Fishermens Associations, Columbia Riverkeeper, Snake Riverkeeper and Idaho Rivers United filed a 60-day notice of intent to sue the Environmental Protection Agency (EPA) under the Clean Water Act for failure to develop a plan to manage hot water temperatures in the Columbia-Snake Rivers affecting endangered wild salmon and steelhead.  If the agency doesn’t finalize a plan for managing lethal water temperatures and establish a Total Maximum Daily Load (TMDL) for water temperatures, groups will file suit.

“Our members’ livelihoods depend on healthy salmon runs,” said Glen Spain, Northwest Regional Director of the Pacific Coast Federation of Fishermen’s Associations and the Institute for Fisheries Resources.  “It’s simply unacceptable to let hot water kill otherwise-healthy adult salmon before they can spawn.“

"Agencies responsible for protecting wild salmon and our rivers have dragged their feet for years in addressing the growing threat of hot water temperatures caused by dams and climate change.  It’s time to develop real solutions to provide salmon with necessary refuge so they can thrive in the next century."

This notice was filed by the Advocates for the West. Read the legal notice, press release and Spokesman-Review story.