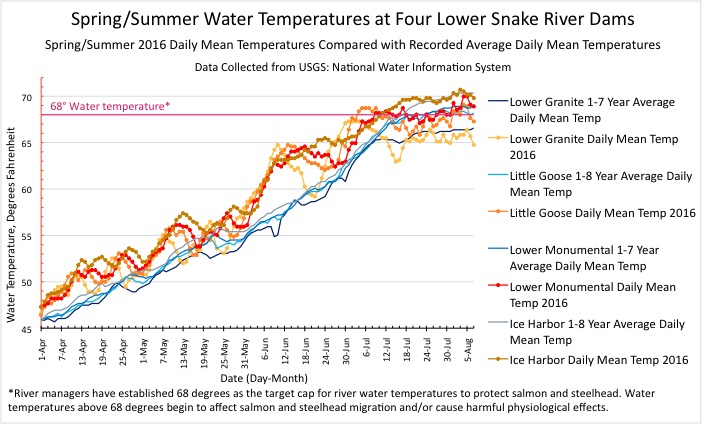 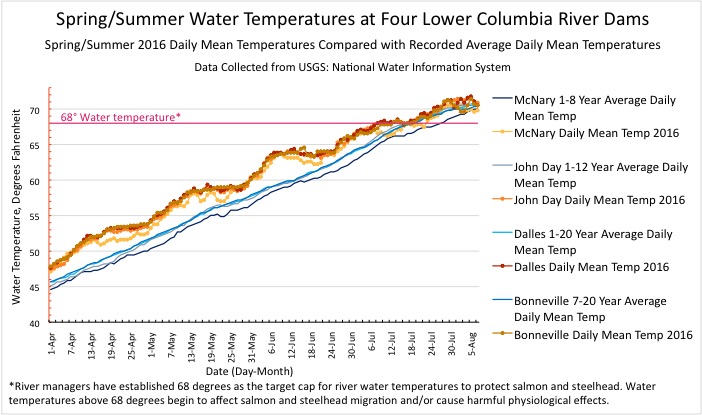 Notably, temperatures in the Lower Columbia River continue to stay high in all four reservoirs with readings up above 68 degrees F. - ranging between 69 and 72 degrees Fahrenheit

Overall in the lower Snake River reservoirs, 68 degrees has been reached or exceeded 21 times this past week and 77 times so far this summer.

In the lower Columbia River reservoirs, 68 degrees has been exceeded every day in all four reservoirs for a total of 28 times this past week and 115 times so far this summer.

THIS WEEK ON THE RIVER: WILD SALMON AND CLIMATE CHANGE - THE LAW

First, it makes plain what the law requires, and thus sets basic standards for any strategy and recommendations on the subject.  The standards will apply to the government’s sixth attempt in 18 years to craft a lawful plan to restore Columbia-Snake wild salmon and steelhead.

Second, it crisply summarizes the basics of climate-salmon science as we know them today.  Scientists at NOAA, the Universities of Washington and Oregon, Columbia River Inter-Tribal Fish Commission, and others have published much research on salmon and climate change in the past 15 years.  The court finds that “the best available information indicates that climate change will have a significant negative effect” on endangered or threatened salmon and steelhead species in the Columbia and Snake Rivers.  The court finds that NOAA paid illegally scant attention to this information, much of it developed by NOAA’s own scientists, in its 2014 plan to restore Columbia-Snake salmon.

Third, the court established a public process in which that science must be assessed, and in which Northwest people’s views on salmon and climate change must be heard.