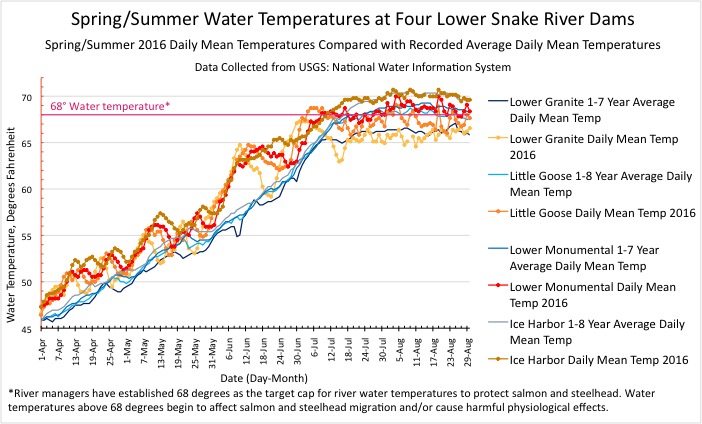 Notably, temperatures in the Lower Snake River appear to be beginning to slowly decline. This of course is good news for stressed and endangered salmon and steelhead that are still moving through this reach of the river - upstream as adults or downstream as juveniles. Temperatures in the Lower Granite Dam reservoir are the lowest - still hovering around 66 degrees - and safe for salmon and steelhead. Temperatures in the reservoir behind Little Goose Dam are a little higher, but still at or close to 68 degrees. Further downstream in the reservoirs of Lower Monumental and Ice Harbor Dams  - temperatures are now about 68 degrees. Ice Harbor Dam's reservoir still has the highest temperatures, but it is cooler this week than during the last 6 weeks. 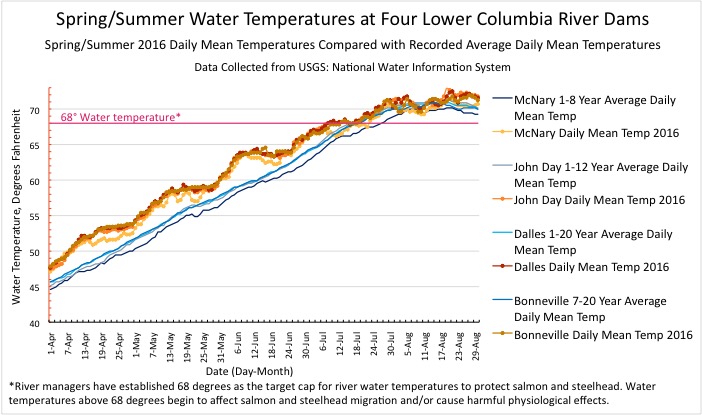 Notably, temperatures in all Lower Columbia River reservoirs continue to read consistently above 70 degrees F. - at or above 72 degrees Fahrenheit. These sustained, high temperatures in the lower Columbia and lower Snake rivers are harming fish returning to the Snake River and its tributaries - with lethal and sub-lethal impacts.

These two tables reflect the previous week's high water temperatures in each of the eight reservoirs created by the lower Snake and lower Columbia River dams. On the lower Snake River between August 24 and 30, temperatures have exceeded 68 degrees Fahrenheit twice in Little Goose, five days in Lower Monumental reservoir and all seven days in Ice Harbor reservoir. Temperatures in each of the lower Columbia River reservoirs have exceeded 68 degrees every day. In fact, there were no readings in the lower Columbia below 70 degrees this past week. This week's overall high temperature recording - 72.32 in John Day pool - was more than 1 degree cooler than last week's high in the Columbia (73.58 degrees in the reservoir behind the Dalles Dam).

Overall in the four lower Snake River reservoirs, 68 degrees has been reached or exceeded 14 times this past week (the previous week was 16) and 124 times so far this summer.

In the four lower Columbia River reservoirs, 70 degrees has been exceeded every day in all four reservoirs for a total of 28 times this past week and 199 times so far this summer. Recreational fishermen have told us that while there are decent numbers of fish in the lower river, they are stressed by the high temperatures and not biting. Catch rates in recent weeks have been very low.

THIS WEEK ON THE RIVER:  Scientists and river managers are paying increasing attention to how migrating salmon rely on cold water refuges, whether they be mainstream rivers, tributary rivers and streams, springs or other sources.  Columbia Basin Bulletin ran this story last week looking at the latest research.  Some of these cold water sources have been buried under reservoirs making them less accessible or inaccessible to stressed wild salmon and steelhead.  Removal of the four lower Snake River dams would deliver multiple benefits, including speeding migrating smolts toward salt water and reducing water temperatures throughout the lower Snake River corridor.  An additional benefit of a restored Snake would be making incoming springs, streams and rivers more accessible to migrating adult salmon, providing cool water stops where fish could rest and wait for lower temperatures when the region experiences heat waves.  Providing cold water “breathers” for our imperiled wild fish populations will become ever more imperative as our climate warms.