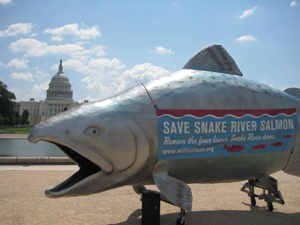 WASHINGTON, DC — On June 3rd, 2011, Congressman Jim McDermott (D-WA) and Congressman Tom Petri (R-WI), joined by 10 original cosponsors, introduced the Salmon Solutions and Planning Act in the House of Representatives. The bill would provide Congress and federal agencies with up-to-date, thorough information about how best to protect and restore wild salmon and steelhead in the Pacific Northwest’s Columbia and Snake River Basin.

What is the Salmon Solutions and Planning Act?

The Salmon Solutions and Planning Act of 2011 (SSPA) is a bill that would provide Congress and federal agencies with up-to-date, thorough information about how best to protect and restore wild salmon and steelhead in the Pacific Northwest’s Columbia and Snake River Basin while also supporting local communities and saving taxpayer dollars.  Specifically, SSPA directs the National Academy of Sciences to analyze federal salmon recovery measures in order to determine the most effective means of protecting and restoring threatened and endangered fish.  The bill also authorizes a series of studies, to be completed by relevant federal agencies, on what actions would be necessary to replace the primary benefits of the four lower Snake River dams in the event those dams must be removed to recover imperiled salmon and steelhead runs.

SSPA does not require dam removal.  It simply seeks to collect and assemble the best information so that federal agencies – such as NOAA Fisheries and the U.S. Army Corps of Engineers – along with Congress, have the facts they need to efficiently and effectively plan both for Columbia Basin salmon recovery and for the protection and enhancement of communities and regional economies.

What exactly does SSPA do?

•    SSPA authorizes the National Academy of Sciences to review the measures that may be necessary to recover Columbia-Snake Basin salmon, including an analysis of lower Snake River dam removal.

•    SSPA authorizes four peer-reviewed studies by federal agencies to examine how to cost-effectively replace the primary services currently provided by the lower Snake River dams, in the event Congress or the Administration determines that the dams must be removed:

1.    The U.S. Department of Transportation would complete an analysis of transportation upgrades, including improved rail and highway access, for shipping freight that currently moves via barge on the lower Snake River’s navigation corridor.

2.    The U.S. Department of Energy would complete an analysis of existing and potential energy options, with an emphasis on carbon-free sources such as efficiency, conservation, and clean renewables, to replace the hydropower currently generated by the lower Snake River dams.

3.    The U.S. Army Corps of Engineers would complete an analysis of opportunities for restoring and revitalizing the lower Snake River riverfront in the event the dams are removed.

4.    The U.S. Department of Interior would complete an analysis of any irrigation or water supply upgrades or changes that would be necessary in order to ensure that existing water supplies currently reliant upon the lower Snake River are uninterrupted.

•    SSPA clarifies that the U.S. Army Corps of Engineers has the authority to remove the four dams on the lower Snake River in eastern Washington.  It does not direct or require the Corps to remove the dams, but it specifies that doing so is within the agency’s discretion.

•    Finally, SSPA authorizes the U.S. Army Corps of Engineers to review and update its 2002 Feasibility Report and Environmental Impact Statement in which it analyzed options for removing the four lower Snake River dams.  The bill directs the Corps to consider and address new and relevant information that has emerged since the study’s completion in 2002 or that it opted not to incorporate in the original document.

Snake River salmon are worth saving.

When Lewis and Clark traveled down the Snake River more than 200 years ago, as many as 30 million wild salmon and steelhead returned each year to the Columbia and Snake River Basin – making it the largest salmon watershed on earth.  Today, all Snake River salmon and steelhead are either already extinct or listed for protection under the Endangered Species Act.  Their steep decline has upended the Northwest fishing industry and harms ecosystems and communities alike.  Current policies could lead to the extinction of more Columbia and Snake River stocks in our lifetime.

In fact, we are likely the last generation to decide whether wild Snake River salmon and steelhead will continue to exist for future generations.

There is little dispute that the Columbia and Snake River hydrosystem is the primary source of mortality for these fish, and that federal agencies have so far failed to reverse their downward spiral.  Scientists agree that we can save Columbia-Snake River salmon, but we have to change the tools we are using.  By supporting the Salmon Solutions and Planning Act, Congress can take a crucial leadership role in restoring this national icon by planning for how best to recover wild salmon and protect the people, communities, and cultures that depend upon them.

We have already spent more than $10 billion on failed salmon protection efforts.

Federal taxpayers and Northwest electricity ratepayers have spent more than $10 billion to date on efforts to protect and restore salmon in the Columbia and Snake River Basin.  Still, most wild salmon populations continue to dwindle.  In fact, many populations remain near the perilously low levels that led to their listing under the Endangered Species Act almost 20 years ago.  Current measures are simply not working and new options must be examined if we are to get salmon recovery on the right track.

Supporting this bill will ensure that Congress and American taxpayers have the information they need to act quickly and efficiently in the event that new measures, such as lower Snake River dam removal, are required to ensure the restoration and protection of our nation’s irreplaceable wild salmon resources.

Planning is essential to protect communities and ensure salmon restoration.

If the current federal salmon plan (the 2010 Supplemental Biological Opinion for the Federal Columbia River Power System) is again found legally insufficient to protect salmon (three out of the last four federal salmon plans have been rejected by federal courts), we must prepare for actions that will meet the obligations of our federal laws and treaties while also protecting communities and people.  The judge overseeing the development of the latest salmon plan has repeatedly urged the inclusion of a contingency plan for lower Snake River dam removal in the event that other recovery measures fail.  But instead of heeding that advice and initiating a careful analysis of dam removal, the current federal salmon plan employs a byzantine system of triggers and responses that would delay any study of lower Snake River dam removal until salmon populations drop to dangerously low numbers; even then, the study would take years to complete, and the process of dam removal (if determined to be necessary) years more.

With some Snake River salmon populations facing possible extinction within the next dozen years, we must be prepared to act quickly if new measures are needed to ensure the survival of these remarkable fish and the communities that depend upon them.  A crucial first step is to collect the data Congress needs to make well-informed decisions about the best path forward for salmon and people.

The decline of salmon in the Columbia and Snake River Basin has devastated fishing communities up and down the Pacific coast and inland to Idaho.  Fishermen describe the impact of these declines on salmon-dependent towns as the equivalent of Seattle losing a Boeing plant; the economic fallout, while proportionately smaller, hits just as hard and just as pervasively. Fisheries have closed, jobs have disappeared, and communities continue to suffer.  At the same time, removing the four lower Snake River dams would affect rural communities in ways that can and must be addressed.  Congress can help by ensuring that the necessary planning and evaluation is done to efficiently manage salmon restoration and respond rapidly if major new actions are required.  The studies authorized by SSPA on transportation, energy, riverfront revitalization, and irrigation will help us understand what those actions must be in order to meet the needs of American taxpayers, Northwest electricity ratepayers, and local communities.

With forward-looking planning, we can protect rural jobs, farmers, energy users, and communities while at the same time restoring wild salmon to the Columbia and Snake River Basin.