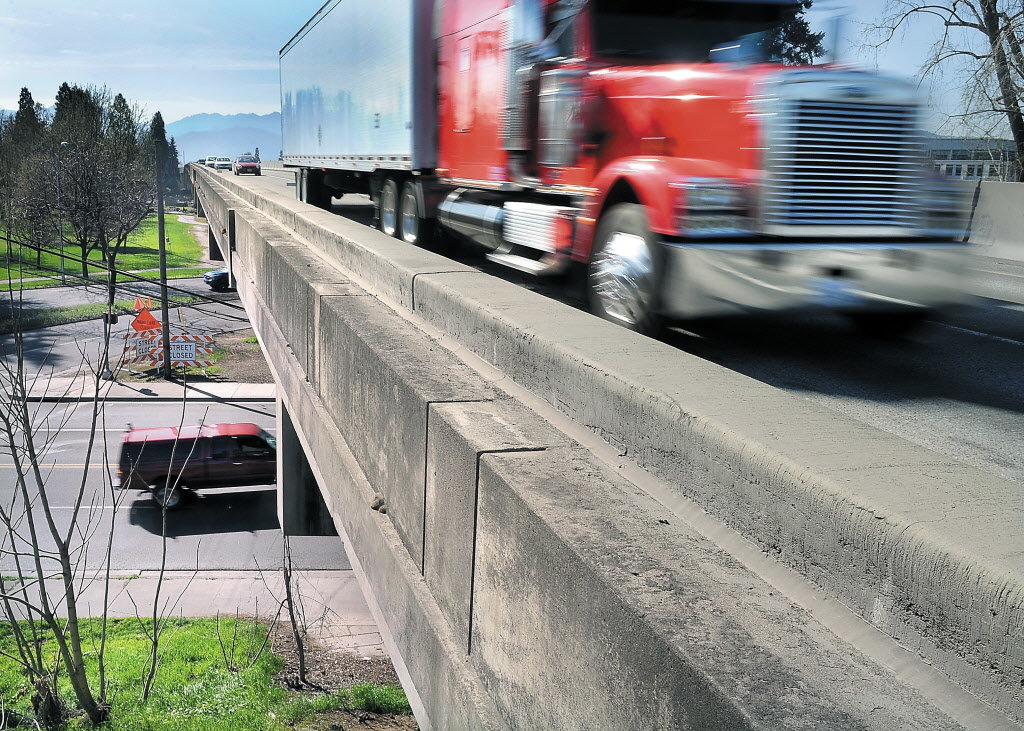 When it comes to shoring up critical roads, bridges and water systems, the United States has plenty of work to do. Last week, the American Society of Civil Engineers released its 2017 Infrastructure Report Card, which gave the country an overall grade of D+.

The report card, which is issued every four years, breaks down what needs to be done state by state, taking a deep look at everything from dams to drinking water.

The report follows a recent survey by U.S. News and World Report, which ranked Oregon and Washington as the top two states when it comes to infrastructure, with California lagging in the lower middle of the rankings.

That doesn’t mean that Oregon and Washington can slack off, since there are still critical areas that need to be addressed, according the society of engineers. In Oregon, for example, there are 77 dams that have a high-hazard risk – something to think about when you hear the latest reports about the threat of Cascadia earthquakes. And in Washington, an estimated 31 percent of public roads are in desperate need of repair.

Here’s a closer look at how Oregon, Washington and California rank in 10 critical areas of the civil engineers’ report card:

Aviation
Oregon: There are 57 public-use airports in Oregon, according to the U.S. Department of Transportation. The largest is Portland International Airport, which served more than 18 million passengers in 2016, accounting for 90 percent of passenger travel in the state. Congestion at PDX and other airports is reaching a tipping point; it is expected that 24 of the top 30 U.S. airports may soon experience Thanksgiving-like volume at least one day every week.

Washington: There are 64 public-use airports in Washington. The largest is Seattle-Tacoma International Airport, which served more than 45 million passengers in 2016, and serves as a hub for Alaska, Delta and Horizon airlines.

California: There are 190 public-use airports in California. The largest is Los Angeles International Airport, which served just over 80 million passengers in 2016, and ranks as the seventh busiest airport in the world.

Bridges
Oregon: 429 bridges (5.3 percent) out of 8,118 are structurally deficient. In 2013, Oregon spent more than $216 million on bridge capital projects, according to the U.S. Department of Transportation and the Federal Highway Administration.

Washington: 392 bridges (4.8 percent) out of 8,178 are structurally deficient. More than 36 percent of Washington bridges are more than 50 years old, putting them towards the end of their design life.

Dams
Oregon: There are 77 high-hazard potential dams in Oregon, and 70 percent of the state’s regulated dams have an emergency action plan, according to the Association of State Dam Safety Officials. The plan identifies potential emergency conditions and steps needed to prevent loss of life and minimize property damage.

Washington: There are 1,174 dams in Washington, and nearly 40 percent are considered high-hazard potential.

California: There are 678 high-hazard potential dams in California, and 68 percent of the state’s regulated dams have an emergency action plan. A good example of how such an emergency plan is enacted happened earlier this winter when the Oroville Dam’s cracked spillway <http://www.sacbee.com/news/state/california/water-and-drought/article139117943.html>  needed to be shored up to prevent catastrophic failure.

Drinking water
Oregon: There will need to be $5.6 billion in drinking water infrastructure work during the next 20 years, according to the U.S. Environmental Protection Agency. That includes replacing lead pipes in older plumbing systems -- something students of Portland Public Schools know all too well <http://www.oregonlive.com/education/index.ssf/2017/02/after_lead_scandal_portland_sc.html> .

Washington: There will need to be $9.5 billion in drinking water infrastructure work during the next 20 years.

California: There will need to be $44.5 billion in drinking water infrastructure work during the next 20 years.

Public parks
Oregon: There are $5.31 million in unmet needs for Oregon’s public park systems, according to the U.S. National Park Service and the Land and Water Conservation Fund State Assistance Program.

Washington: There are $241.2 million in unmet needs for Washington’s public park systems, the highest per-capita need on the West Coast.

California: There are $4.85 billion in unmet needs for California’s public park systems.

Rail
Oregon: There are 2,396 miles of freight rail across Oregon, ranking it 25th in the nation, according to the U.S. Department of Transportation.

Washington: There are 3,192 miles of freight rail across Washington, ranking it 22nd in the nation.

California: There are 5,295 miles of freight rail across California, ranking it 3rd in the nation.

Roads
Oregon: 11 percent of public roads in Oregon are in poor condition, making it the best on the West Coast, according to the U.S. Department of Transportation and the Federal Highway Administration.

Washington: 31 percent of public roads in Washington are in poor condition.

California: A staggering 50 percent public roads in California are in poor condition, making it among the worst in the nation. Only the tiny states of Connecticut and Rhode Island have a higher percentage of roads in need of repair.

Schools
Oregon: There is an estimated $457 million gap in school capital expenditures in Oregon according to the 21st Century School Fund, Inc., U.S. Green Building Council, Inc., and the National Council on School Facilities.

Washington: There is an estimated $556 million gap in school capital expenditures in Oregon.

California: There is an estimated $3.2 billion gap in school capital expenditures in California.

Transit
Oregon: Annually, there are almost 130 million unlinked passenger trips in Oregon using public transportation systems, including bus, transit and commuter trains, according to the U.S. Department of Transportation.

California: Annually, there are more than $1.4 billion unlinked passenger trips in California.

Wastewater
Oregon: Over the next 20 years, Oregon faces $3.89 billion in wastewater infrastructure needs, according to the U.S. Environmental Protection Agency.

Washington: Over the next 20 years, Washington faces $4.07 billion in wastewater infrastructure needs.

California: Over the next 20 years, California faces $26.2 billion in wastewater infrastructure needs.