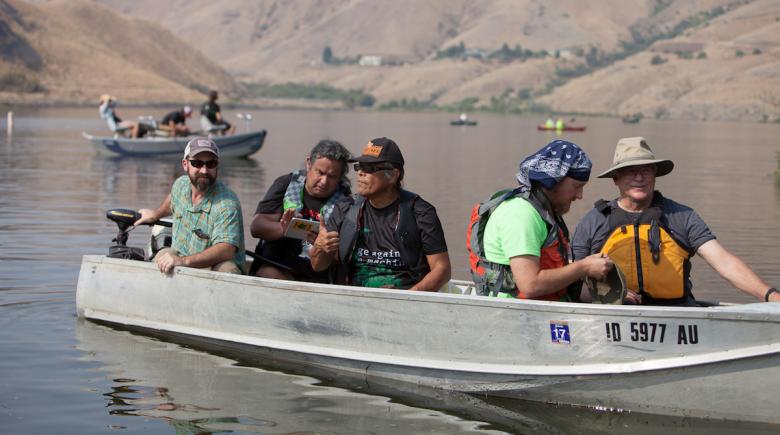 On the morning of Saturday, Sept. 9, about 100 people descended on the Snake River near Lewiston, Idaho, paddling toward the Lower Granite Dam in canoes and kayaks alongside a giant inflatable orca.
Elliott Moffett, a 65-year old Nez Perce tribal member sporting a Rage Against the Machine T-shirt, addressed the crowd with a booming voice and a familiar chant:

For decades, river advocates have been tied up in court, demanding the federal government restore threatened and endangered salmon and steelhead populations that migrate through the Columbia and Snake Rivers. Since 1975, when Lower Granite Dam was completed, salmon in the Snake River basin have faced the obstacle of eight massive concrete dams before making it out to the ocean, then they do it all over again when they come back home to spawn.

Running that gauntlet of concrete and warm water puts a major strain on the fish and is considered perhaps the single greatest reason for their precipitous decline.

Two summers ago, scores of dead salmon began washing up on the shores of the Willamette and Clackamas rivers in Portland, alarming visitors with the stench of rotting fish. Water temperatures had risen above the dangerous boundary of 68 degrees, and in some Columbia River reservoirs had actually reached 79. More than 250,000 sockeye salmon were killed, and over 1 million young fish died in Washington state hatcheries. Multiple studies on the impact put the death toll at between 96 and 99 percent of the sockeye salmon run.

Since 1991, the dams have been the subject of legal battles as environmental advocates seek their removal. In May 2016, a federal district judge ordered dam operators to put all options on the table to save threatened and endangered salmon and steelhead – including dam removal on the Snake River. His order led to federal hearings throughout the region that ended earlier this year.

But these studies could be compromised by new federal legislation, HR 3144, co-sponsored by U.S. Rep. Kurt Schrader, (D-5th District), which would specifically prevent federal agencies from studying dam removal on the lower Snake River.
Just last month, Columbia Riverkeeper released an analysis demonstrating that the massive fish kill that surfaced in Portland in 2015 would not have happened if the four dams on the lower Snake River were gone.

Such conflicting pressures have helped to galvanize a coalition taking their energy directly to the waters of the lower Snake where they’ve been gathering since 2015 for an event called the Free the Snake Flotilla.

Street Roots reached out to two organizers in Idaho’s Nez Perce country, who live at the far end of the unified system of rivers and hydro-power dams. Julian Matthews and Elliott Moffett are co-founders of Nimiipuu Protecting the Environment, a grassroots organization that co-hosts the flotilla. (Nimiipuu is the traditional word Nez Perce tribal members use to refer to themselves, using their own language. The name “Nez Perce” is a French colonial monikor meaning “pierced nose,” and referred originally to a tribe that lived north of the Nimiipuu).

Read the full article and interview with Elliott Moffatt and Julian Matthews here.