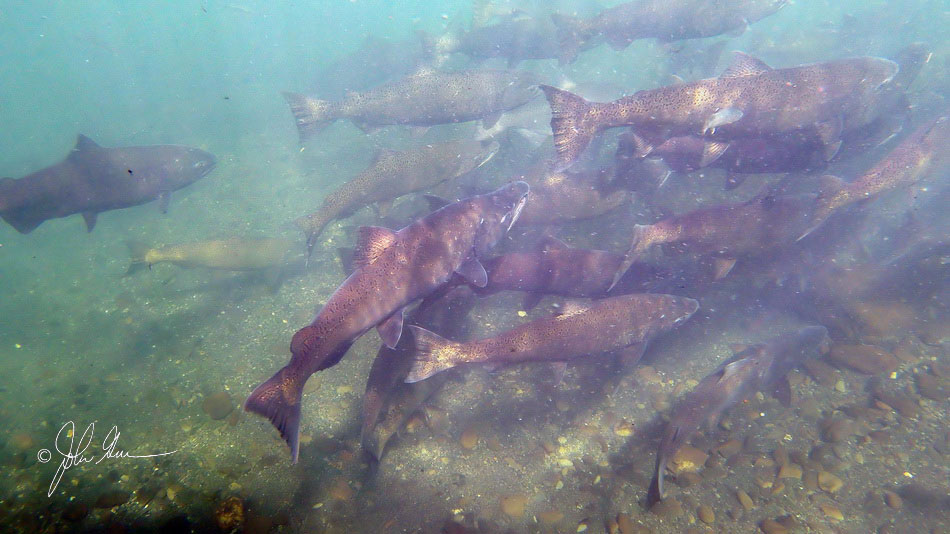 OLYMPIC NATIONAL PARK — For the first time in more than a century, steelhead trout and sockeye salmon have been spotted in the upper reaches of the Elwha River.

They're the latest species to return to territory long blocked by the river's dams.

'We had chinook salmon above the dam within weeks (of dam removal), but now we're getting a greater diversity of fish,' said Barb Maynes, spokeswoman for Olympic National Park.

The world's largest dam removal project was completed in August 2014. Chinook and bull trout wasted no time pushing through the narrow channels left after the dams were blasted out.

The park followed up with the removal last year of about a dozen massive boulders that had fallen into the river sometime after the Glines Canyon Dam was completed and before its removal began in 2011.

Fisheries biologists confirmed the presence of upper-river steelhead and sockeye late last month. Biologists conducted early and late August surveys above the dam sites by donning snorkel gear and swimming the length of the survey area.

Between Rica and Glines canyons, biologists saw a small numbers of chinook, steelhead and pairs of sockeye digging nests, or redds, to lay eggs.

Surveys conducted farther up the river, between the Hayes River confluence and the Elkhorn Ranger Station, revealed chinook, steelhead and bull trout.

Pink, coho and chum salmon and Pacific lamprey already had been observed above the dam sites after the dams were removed.

Later this month, biologists will survey redds and DNA from the environment to assess chinook recolonization and spawning.