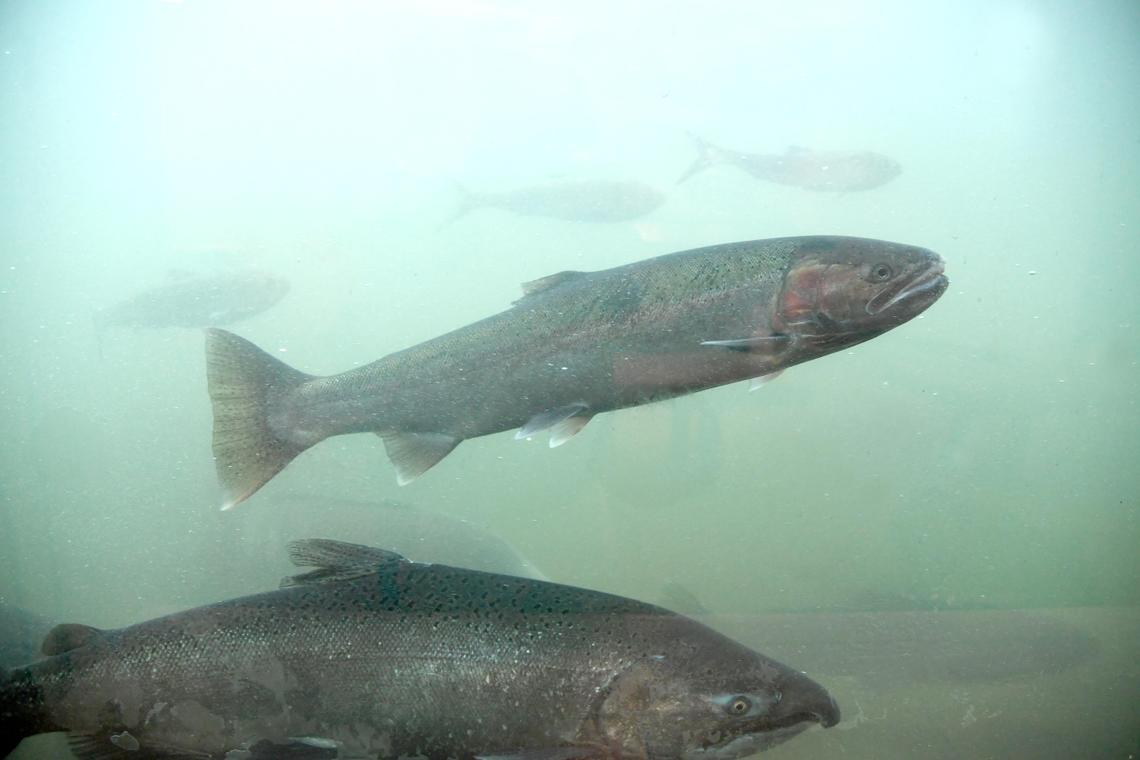 Electricity production: About 1,000 average megawatts, or enough to power Seattle

But on a February day in 1975, the young Idaho Fish and Game biologist rode a jet boat down the Snake River instead of fishing on his lunch break. The pool behind the newly constructed Lower Granite Dam had begun to fill, creating a reservoir that stretched to Lewiston, the city at the confluence of the Snake and Clearwater rivers.

Most Lewiston residents celebrated the day their town became an inland seaport. Barges could leave the Port of Lewiston, passing through a series of locks and dams on the Snake and Columbia rivers to travel 360 miles to Portland.

The day was especially sweet for the Inland Northwest’s grain growers. They’d spent 40 years lobbying for a barge route that could transport their wheat to Portland, providing relief from high shipping costs charged by railroads.

But Pettit felt only grief as the rising water covered familiar landmarks. “It was the saddest day of my life,” he said.

A series of public meetings begin this week on the operation of the Northwest’s federal hydropower system. Pettit will attend at least one of the meetings, testifying that the Lower Snake River dams should come down.

Lower Granite was the last of four dams built across the Lower Snake’s basalt canyons.

All of them were constructed with fish ladders, but passage over the dams was yet another impediment to young salmon and steelhead that spawned in central Idaho and migrated hundreds of miles to the ocean.
‘This is a really critical process’
The upcoming meetings are a result of a federal judge’s ruling in May saying the latest of five federal plans for restoring wild salmon and steelhead runs on the Columbia and Snake river systems was flawed.

U.S. District Court Judge Michael H. Simon ordered federal agencies to prepare a new plan by early 2018. The meetings will allow Northwest residents to talk about issues they think should be part of an environmental review of federal hydropower operations.

The court ruling doesn’t order the agencies to investigate breaching the Lower Snake River dams to restore salmon, said Amy Gaskill, a spokeswoman for the U.S. Army Corps of Engineers, which is hosting the meetings with the Bureau of Reclamation and Bonneville Power Administration.

But in blunt language, Simon wrote that the federal agencies had “done their utmost” to avoid considering breaching the Lower Snake dams, and suggested that a proper review under federal law could require analyzing the effect of breaching or bypassing one or more of the dams.

Salmon advocates who were plaintiffs in the lawsuit have seized the moment. Several hundred supporters gathered last month for a “Free the Snake” flotilla in Lewiston.

“Removing the four Lower Snake dams is the single most important action we could take to restore salmon in the entire Columbia-Snake river basin,” said Sam Mace of Save Our Wild Salmon <http://www.wildsalmon.org/> .

Beyond the dams are thousands of miles of pristine rivers and streams. As the climate warms and snowpacks shrink, those high-elevation river basins will remain cold enough to support salmon and steelhead spawning and rearing, Mace said. They’re sometimes called “the ark” for preserving wild populations, she said.

“This is a really critical process,” said Terry Flores, executive director of Northwest River Partners <http://nwriverpartners.org/> , which represents agriculture and shipping interests and the public utilities that buy electricity from the federal hydropower system. “We think that dams are an important part of the Northwest economy.”

About 60 percent of Washington’s wheat and barley crop is shipped downriver by barge to Portland. And the reservoir behind Ice Harbor Dam on the Lower Snake irrigates about 60,000 acres of cropland.

A dam-breaching discussion also raises questions about how the carbon-free electricity would be replaced. About 5 percent of the Northwest’s electricity comes from the four Lower Snake Dams, which provide enough energy for a city the size of Seattle.

Breaching the four Lower Snake dams isn’t something that could be ordered by a court, said Gaskill, the corps spokeswoman. Since the dams are federal projects, removing them would require action by Congress and a federal appropriation, she said.

BPA, which sells the electricity from the Northwest’s federal hydropower system, estimates the cost of breaching the dams at $1.3 billion to $2.6 billion.
Plight of Idaho’s fish  ‘very bleak’
Pettit retired after 32 years with Idaho Fish and Game, spending a significant part of his career on fish passage at the dams.

Despite hundreds of millions of dollars spent over the years, the dams and their reservoirs still kill too many young salmon and steelhead, Pettit said.

According to the Corps of Engineers, more than 90 percent of the young fish survive passage through each dam. But the cumulative toll from dams and reservoirs all along the Columbia and Snake rivers adds up to mortality rates of 50 percent or more for Idaho’s wild runs as they migrate to the ocean, Pettit said. The exception is fall chinook, which survive in higher numbers because of court-ordered water releases from reservoirs during their migration, he said.

“Unless something drastic happens, the plight of Idaho’s salmon and steelhead is very bleak,” he said. “I don’t think we can change the dams enough to recover the fish with climate change in place.”

Salmon and steelhead will face increasingly hostile ocean conditions as a result of climate change, Pettit said. Ocean acidification is affecting the North Pacific’s food chain, which means there’s less for them to eat.

In addition, some Northwest rivers will become too warm for the fish, he said. The Deschutes, John Day and Wenatchee rivers are at risk, Pettit said.

With their high mountains, central Idaho’s Clearwater and Salmon river drainages have the best cold-water habitat for spawning left in the Columbia Basin, he said.

“It’s wilderness, as pristine as you can get,” he said. “As climate change grabs ahold of us harder and harder, the high elevations are going to be the last bastion for salmon.”

Preserving wild runs is critical to salmon and steelhead long-term survival, Pettit said. Wild fish are genetically adapted to where they live, and they return from the ocean in higher percentages than hatchery fish, he said.
Barges ship most of the region’s wheat
The Lower Snake dams have strong advocates in Eastern Washington.

About 3,700 farmers grow wheat and barley in the region, according to the Washington Grain Growers. Most of their crops are shipped to Portland and exported overseas.

Besides the 60 percent of the grain that moves to Portland by barge, some of it is transported by rail and truck. Farmers benefit from multiple shipping options, which helps keep prices competitive, said Glen Squires, chief executive for the Washington Grain Commission.

Barges can move large amounts of grain quickly, and they’re an environmentally friendly form of transport, he said. A tug pushing a barge can haul a ton of wheat 576 miles on a single gallon of fuel.

Grain shipments make up the largest commodity movement on the Lower Snake River. Some other crops, fertilizers, wood chips and sawdust are also shipped on the Lower Snake. But in general, barge traffic on the Lower Snake has experienced a 20-year decline, including decreases in wheat shipments, according to the Corps of Engineers Navigation Data Center <http://www.navigationdatacenter.us/> .

Petroleum shipments to Lewiston dropped after a pipeline was built to Spokane, according to a 2015 study by Rocky Mountain Econometrics. And railroads have competed for grain shipments with lower prices, the study said.
Climate change ups the ante for salmon, carbon-free energy
Climate change has upped the ante not only for salmon survival, but for the carbon-free energy produced by the Lower Snake dams.

The four dams produce about 1,000 average megawatts of power, which is enough to supply 800,000 households. But the dams’ average output doesn’t fully explain their importance for meeting the region’s electric needs, according to BPA officials.

During an extended cold snap in 2014, when nighttime temperatures dipped to the teens and lower across the Northwest, BPA used extra generating capacity at the Lower Snake dams to meet higher demand for electricity, said Steve Kerns, BPA’s manager of generation scheduling.

Reservoirs behind the four dams store water in the fall and winter. Even though they’re not deep reservoirs, the pools can be drawn down or raised 5 feet to respond to changes in electrical demand or unexpected outages at other plants, Kerns said. The dams can produce 2,650 megawatts of electricity during times of peak demand.

The Lower Snake dams are among 10 federal dams in the Northwest with automatic controls that allow them to react instantly to changes in electric demand, which provides reliability for the system. The versatility in the hydro system helps the region’s electric grid integrate wind generation, which ramps up and down quickly, Kerns said.

The Lower Snake dams also are strategically located on one of the main transmission corridors that bring electricity from Montana and Idaho into Oregon and Washington. The dams’ power production helps stabilize the system.

Breaching the four Lower Snake dams would require the Northwest to build a plant fired by natural gas, BPA said in a study last year.

Even a highly efficient gas-fired plant would increase the region’s carbon dioxide emissions by 2 million to 2.6 million metric tons annually, which is like adding 421,000 passenger cars to the road, the study said.

But the analysis has been criticized by some environmental groups, which say a combination of conservation and other renewable energy could replace the power from the four dams.

BPA officials declined to talk about the study because the issue of energy replacement could become part of the federal environmental review.

Pettit, the retired Idaho biologist, still fishes for steelhead, though it’s been a poor year for both wild and hatchery returns, he said.

The region is overdue for a serious talk about the Lower Snake dams, he said.

“I consider the salmon and steelhead that return to the Snake River system to be a strong icon of what Northwest living is all about,” Pettit said. “If we’re going to keep them around, there will have to be tradeoffs made.”