SOS Blog: Spokane churches and Nez Perce Tribal members gather together on the banks of the lower Snake River

From the desk of Jacob Schmidt, Save Our wild Salmon intern 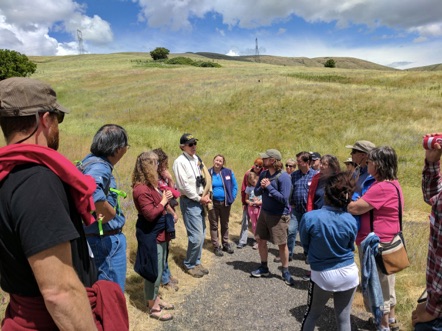 On June 10, three Spokane churches--Salem Lutheran, St. Mark’s Lutheran, and St. John’s Episcopal Cathedral visited the lower Snake River to discuss, salmon, dams, and treaty rights with members of Nimiipuu Protecting the Environment, a Nez Perce tribal conservation organization.  They met at Wawawai, once a gathering place for the tribes, before it became an orchard town.  Wawawai now sits underwater as a result of the nearby Lower Granite Dam. This special place and its history served as the backdrop for the first of what will hopefully prove to be many interfaith events focused on the restoration of wild salmon.

Throughout the Judeo-Christian scriptures there is constant reference to the interconnectedness and life giving properties of all the waters of the Earth, from the beginning of Genesis in which God’s face hovers above the waters and in which fish are called forth to fill those waters, to the baptism of Christ in a small local stream called Jordan. The region in which we live is defined by its water. We utilize one of the greatest waterways in the world, the Columbia and Snake rivers, for recreation, sustenance, and industry. Yet God’s blessing over the waters of the Earth and Christ’s redemption of those waters through baptism do not constitute holy permission to alter and abuse our rivers and oceans.  Every commandment must be filtered through those two greatest of commandments: love God and love our neighbors. Can we love a river God made if we stop its current? Can a good steward allow for extinctions?

These members of the Inland Northwest Christian community came alongside Nimiipuu Protecting the Environment to confront the difficult past as well as to look ahead to the challenges of the future. The faithful people of the Inland Northwest must reckon with the fact that Jesuit priests burned Kalispel canoes, that Presbyterian missionaries forced a sedentary lifestyle upon the Nez Perce, and that countless others promoted the construction of dams that have been devastating to the salmon cultures of native tribes. We cannot undo these things, but we must not forget them. The Christian community of the Inland Northwest has the power to lead the way on the path toward restoration and reconciliation, as we saw on this Saturday in June. 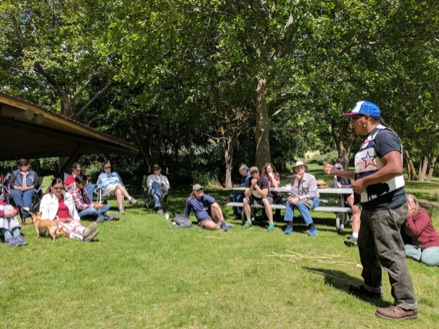 The event moved along at the relaxed pace I’ve come to expect and appreciate from our Nimiipuu friends, with time generously given to all in attendance to introduce themselves, ask questions, and be heard. After everyone had eaten their fill (and had an extra one or two of Sam’s cookies), a portion of the group took a walk up the hillside to catch a glimpse of Lower Granite Dam while parsing some of the economic issues surrounding the removal of all four Lower Snake Dams. Thankfully Bryan Jones was along to speak to the experience of the farming community. Upon returning to the picnic shelter, Elliott Moffett and Gary Dorr delivered a crash course in treaty law and the efforts of Nimiipuu Protecting the Environment to have them upheld.

Throughout the day I saw strong connections forming that will bear fruit in the coming months. Be on the lookout for another interfaith event at the river for Palouse area churches sponsored by Friends of the Clearwater, and a “Loaves and Fishes” event in Spokane to celebrate and hear the concerns of the food producers of our region. It is our hope that through this and future events many more will come to believe that salmon are holy, just as our native brothers and sisters do. We hope that all will see an immense beauty in the life cycle of these fish. We hope also that the faith community will rally around the very real possibility of losing that beauty and the unique culture of our native neighbors if nothing changes in the Columbia/Snake reservoir system. In the midst of the divine miracle of prodigal fish making the unlikely journey home, stand four barriers too many. On June 10 a new cast of allies joined in the process of changing the status quo through dialogue and action to truly restore salmon.