Seattle Times: Warm-water conditions in the Columbia and Snake Rivers are challenging cold water salmon and steelhead — and the problem is likely to get worse because of climate change. 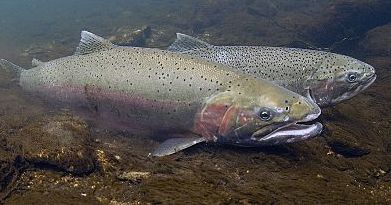 Salmon and steelhead are in hot water — a problem scientists warn is going to get worse because of climate change.

Steelhead returning this year to the Columbia and Snake rivers migrated out of the river during horrendous conditions in 2015, which included record low flows and high water temperatures.

Those steelhead also were at sea during the so-called “blob” — a mass of warm water that began forming off the West Coast in 2013   and wreaked havoc in the ocean, including depressed food supplies for marine animals of all sorts.

Now those steelhead are migrating back through reservoirs where water temperatures at some Columbia and Lower Snake River dams, thanks to a record Northwest heat wave, have been stuck this summer above 70 degrees for days on end — potentially lethal for salmon and steelhead.

“They are just getting creamed everywhere they turn; conditions in the Columbia and Snake are the worst I have ever seen them,” said Steve Petit, a steelhead biologist with Idaho Fish and Game for 32 years before retiring, he hoped, to fish the Clearwater River that runs past his home.

But not this year. The state of Idaho closed all rivers for sport harvest of steelhead this week because there are so few fish. Only about 400 steelhead had crossed Lower Granite Dam on the Snake River when the agency announced a fall steelhead season closure,  a precipitous drop from the 10-year average of more than 6,000 steelhead over the dam near Lewiston, Idaho.

Steelheaders all over the region are reeling — just not the good kind of reeling.

“Until this year, I had a narcoticlike steelhead fishing habit,” Petit said. But this year he’s fishing in the Kamchatka region of Russia for a last hurrah. “Then I’m probably going to just put all of my gear on eBay and sell it. I just don’t see any future for our fish. And I am not alone. All my friends that are in our 70s have just given it up, they don’t fish anymore. It’s too painful.”

Read the full story with graphics at the Seattle Times website.