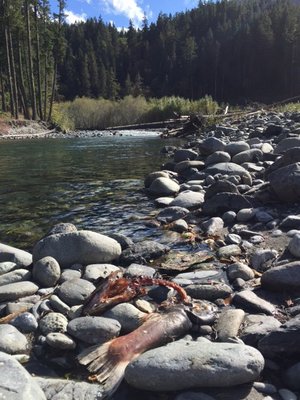 More sockeye, chinook and bull trout have made it above the former Glines Canyon dam site so far this spawning season than documented in any year since the unprecedented dam-removal project completed on the Elwha River.

More sockeye, chinook and bull trout have made it above the former Glines Canyon dam site so far this spawning season than documented in any year since the unprecedented dam-removal project was completed on the Elwha River.

The fish returns this season are an encouraging sign that blasting work in the river last summer to improve passage after initial dam removal has made a difference.
Numbers aren’t yet final, but so far snorkel surveys and radio telemetry used by scientists to track and monitor fish throughout the Elwha show that from the end of July through the end of September, about 70 chinook salmon made it above the former Glines Canyon dam site.

The farthest the fish have been seen upriver so far is at river mile 29. “That’s a considerable ways above, that’s past Elkhorn,” said George Pess, biologist at the National Oceanic and Atmospheric Administration’s Northwest Fisheries Science Center. Pess, with an interagency team of collaborators, has closely tracked the river before and after dam removal to document the Elwha’s response.

To understand how fish are using the river, more surveys of redds and analysis of DNA samples from river water are under way this fall.
The largest ever anywhere, the $325 million federal dam-removal project on the Elwha took out the Elwha and Glines Canyon dams, built beginning in 1910 to provide hydropower for Port Angeles and the Olympic Peninsula.

Before the dams came down, the power they generated was replaced by juice from the public power grid to the dams’ only remaining customer, a pulp mill in Port Angeles. One of the dams’ original customers, the mill is still in business.

Concern over fish-passage problems persisted when scientists documented only one adult chinook making it past the former Glines dam site during the 2015 summer and fall migration season.

Now fish are returning to the river above and below the dam sites in about equal numbers, adding to confidence that passage barriers are ameliorated.
About a dozen steelhead have also been spotted so far this year above the former dam site — and they may be summer steelhead, adding to the diversity of fish beginning to recolonize the river, Pess noted.

More than 4,000 chinook spawners were counted above the former Elwha Dam the first season after the dams came down. The first concrete went flying in September 2011, and Elwha Dam was out the following March. Glines Canyon Dam upriver tumbled for good in September 2014.

Overall, fish populations are the highest in 30 years. And that’s before the first progeny of salmon and steelhead going to sea since dam removal started coming back this year.

In addition to salmon and steelhead, lamprey have been documented using new areas of the river system, including Indian Creek.
The thing to do now is continue monitoring the recovery in the river, to see how it goes. But the blasting “obviously made a substantial difference,” Pess said.

Divers with torches also worked last month to cut off rebar and remove other debris, including metal shards and hunks of concrete from the former Elwha Dam’s original concrete foundation.

The debris created a boating hazard in the Elwha in the area of the former dam such that the National Park Service warned boaters away beginning last May.

The goal of the restoration is a multispecies revival of the entire watershed, three-quarters of which is in Olympic National Park. Taking down the two dams reopened 70 miles of some of the best spawning habitat for salmon in the region.

Acting park Superintendent Rachel Spector said in a prepared statement she is pleased so far with the results of dam removal. “As restoration proceeds, the benefits continue to mount along the entire river and throughout its entire system.”

The project already has received international recognition. Federal scientists Jeff Duda and Jonathan Warrick traveled to New Delhi last month to receive the 2016 Thiess International Riverprize for the collaborative work of the U.S. Department of the Interior and Lower Elwha Klallam Tribe to restore the Elwha.

The Riverprize is an annual award given by the International RiverFoundation to recognize premier examples of river-restoration management. The Elwha dam removal project was recognized as one of three Riverprize finalists for its unprecedented scope as the largest dam-removal project in history. The prize also recognized other elements of the project, including reseeding and replanting, sediment management and more.

“The Elwha River restoration is a shining example of what can happen when diverse groups work together to recognize rivers for their many contributions to our culture, economy and environment,” Interior Secretary Sally Jewell said of the award in a prepared statement.

“It was powerful to witness the largest dam removal and ecosystem restoration in history, and to see endangered salmon, trout and other fish once again regain access to their historic migration and spawning habitat along the Elwha River.”