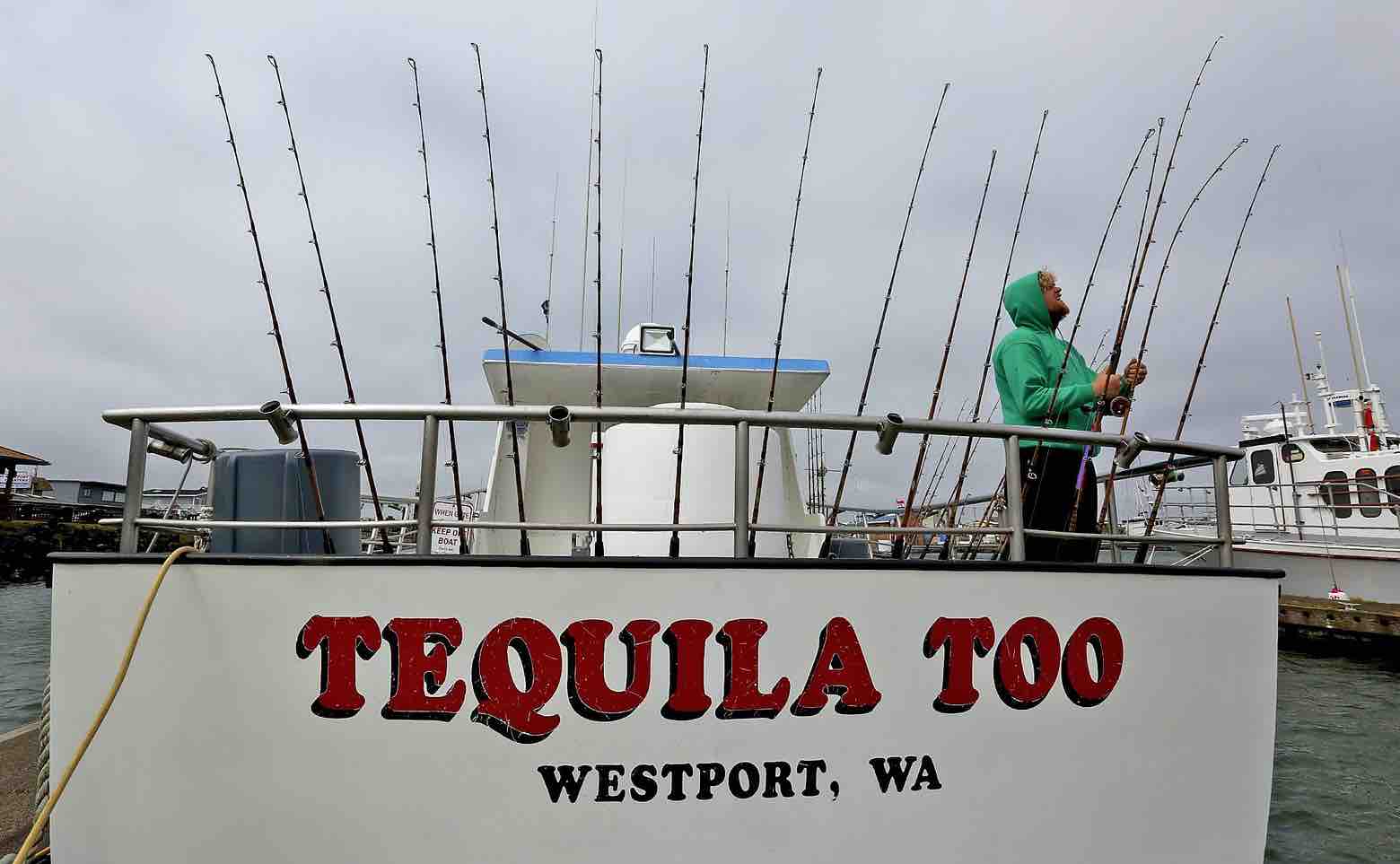 WESTPORT — As pretty much always, it’s windy and cold on this day by the ocean.

A few tourists poke around the main drag in town, maybe stop in a gift shop and buy caramels. It’s the slow time of the year, with just a couple of boats taking customers out for bottom fishing.

In his office at Deep Sea Charters, Larry Giese, one of the two big local fishing-boat operators, talks about its being a nervous time in this little town of 2,100.

The salmon season could be an unmitigated disaster. Coho — one of five salmon species that migrate out to sea and then return to the state — are in big trouble; the Columbia River hatchery coho are expected to return in half the numbers of last year.

State and tribal fish managers are expected this week to decide whether to cut way back on the commercial and recreational salmon fishery in Washington’s ocean waters — or call it off completely.

“We’re fishermen. We’re not hedge-fund managers and bankers and Internet gurus. We’re fishermen,” says Giese, a member of the state’s sport-fishing advisory board. “We’re already operating on a shoestring of what we used to have.”

The managers have been meeting in recent days, hashing it out with reports, one of which includes a list of 64 acronyms and abbreviations (RER for Rebuilding Exploitation Rate, SDC for Status Determination Criteria) that are supposed to make things simpler.
The managers are looking at salmon quotas.

Larry Giese, the owner of Deep Sea Charters and a board member of the Westport Charterboat Association, describes the economic impact reduced salmon fishing could have on the town of Westport. (Erik Lacitis and Greg Gilbert / The Seattle Times)

Giese, 65, is used to financial hurt in the fishing business.

He used to be a manufacturing engineer before he was laid off in the early 1990s. He had gone fishing from Westport with his dad since age 4.

Because of bad salmon runs, fishing for them was banned that year. “I thought to myself, what did I get myself into?” says Giese. “I worked for my brother building custom homes. I found a job as a machinist.”

The last decade has been pretty good, he says. The business owns eight boats.

It’s always been about the salmon at Westport, even as it has promoted everything else from bottom fishing to crab races.
Giese says salmon fishing accounts for 70 percent, or $4.2 million, of the town’s charter-boat business.

He figures that Westport’s 42 or so boats employ about 130 people. That means a lot in Grays Harbor County, with its 9.7 percent unemployment rate, twice that of King County.

Temperature shift
The all-too-obvious statement that everything is linked in the ocean is dramatically shown with the coho salmon.

Three years ago the ocean surface waters in the North Pacific warmed up by as much 5 degrees Fahrenheit. This mass was nicknamed “The Blob” and it spread across hundreds of miles.

Scientists didn’t place the blame on climate change but, said the feds, “the situation does not match recognized patterns … ”

When you have warmer ocean waters, the microscopic animals called zooplankton with less fat are the ones that do better. These little organisms are the base of a food web, and if it’s less nutritious right at the beginning, that reverberates up to the salmon.

The coho were particularly vulnerable because they spend less time in the ocean, says Aaron Dufault, a state fish biologist. If there is less food during that time, they die off or return much smaller.

And so what to do?

The state says a robust fall chinook run is expected.

But when you catch chinook in the ocean, you’ll inevitably catch some coho, too.

Coho that are caught and released have a 14 percent mortality rate.

“Salmon capital”
In this little town, it is time to hunker down.

She remembers how it used to be: “This was the salmon capital of the world.”

Rob Bearden, 62, is the mayor of Westport. He used to be a commercial fisherman and now is a pilot-boat captain taking shipping traffic in and out of Grays Harbor.

His parents used to own Bearden’s Pancake House in Westport. Back then, in the 1960s when Bobby Kennedy would bring his family over for salmon fishing and there were 270 charter boats, “My folks opened up between 3 and 4 in the morning. People would line up outside the building to get something to eat.”

In 2015, the salmon season at Westport was 76 days. This year? Maybe half of that, if lucky?
At least there are the lingcod.

Sure, they’ve been described as prehistoric-looking bottom fish with large heads, vampire teeth, bug-eyed and mouths big enough to swallow a basketball.

But they’re good eatin’, say those who on this day venture out on a $140 bottom-fishing trip.

Mitchell Mock, of Port Orchard, does the math. Ten pounds of lingcod, 10 sea bass, “Right there, you’ve paid for your trip.”

The town’s mayor also used to run a charter boat.

There is just something about catching a majestic salmon.

“I’ve had a nice big salmon take somebody around the boat five times,” remembers Bearden.

At Westport, all they can do is wait for the fish managers to decide their fate.